It was one of those rare Texas spring evenings when the Dallas weather sheds its usual overcoat of humidity and haze for one of the crisp bright Colorado air of Crested Butte or Telluride. Perfect weather for getting outside on a weekday evening after work and head for the lake, White Rock Lake. Problem is, everyone with a bike, a pair of running shoes or a dog thinks it’s a great evening to head outdoors too. The lake often turns into a traffic jam of humanity competing for the same ribbon of concrete. Cooler heads take a rain check and head somewhere else. If you are on a road bike an attractive alternative is the Richardson Bike Mart South Route that heads southeast of Dallas towards Sunnyvale. If you are dirt savvy, a world of alternative options opens up to explore. 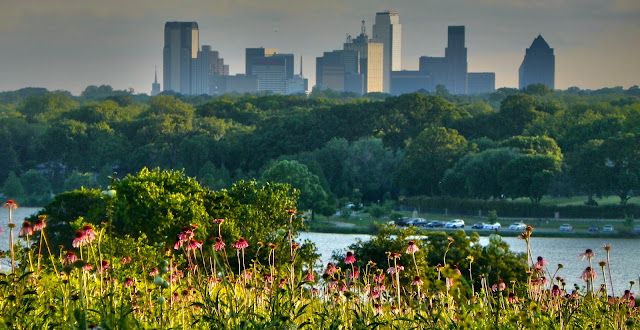 Hard to find fault though with sticking to White Rock Lake. The east shore of the lake features a prominent limestone uplift known to many as Lake Highlands. From the Harry Moss Native Area near the corner of Arborside and Royal Lane; Flag Pole Hill on Northwest Highway, the Lower White Rock Creek Trails off Jim Miller; clear to McCommas Bluff in Pleasant Grove, a loose patchwork of blackland prairie can be found.

North Texas does not have snow capped peaks, crystal clear streams or ocean front vistas found elsewhere. For a few short weeks though, the blackland prairie of Dallas shines as one of the best places to see wildflowers, anywhere. Through the hard work of private citizens, many of these places that were once mowed quarterly have been allowed to return to a more natural state.

For those less enthusiastic about a trip to Pleasant Grove to wander remote trails, Norbuck Park at the corner of Buckner Blvd and Northwest Highway is a great alternative. Park in the softball parking lot on the east side of Buckner. Head up the hill towards the tennis courts. Veer left through the trails that wind in and out of the woods.

Friend of the blog Bill Holston, has a great off beat trail guide featured in the May 2012 issue of D Magazine. The link to his story can be found here: 10 Top Trails For Hiking And Biking In Dallas.He has a great list of trails there that span a great deal of the 214 and 972 area codes. He even mentioned the Scyene/Piedmont Ridge Trail discussed in this post.

The Fire at Devon Anderson Park

Prairies and fires go together like peanut butter and jelly. Hard to have one without the other. Fire was a routine part of the ecosystem across much of United States before European settlement. Many varieties of plants use fire as a trigger to broadcast seed or trigger new growth. Fires clear underbrush, weeds and deadfall that often clog up the natural cycle of life.

Up until last week I had never seen a prairie fire in person. The Dallas area dodged a bullet last summer during the drought with wildfires. Possum Kingdom to the west and areas around Bastrop to the south were hard hit by massive fires. There were many times last summer when I wondered not if but when some careless or intentional act would set afire the Great Trinity Forest. Luckily it did not happen.

Riding down from White Rock Lake through Scyene and Piedmont Ridge, smelling wood smoke around dinner time is routine. People grill outdoors all through the neighborhoods around there. It was not until I moved south of Bruton Road that I figured out something was off. I still did not think much of it, focusing instead on the trail that had become overgrown in some areas. Much of the trail south of Bruton is difficult to negotiate on a bike and much of it must be walked, called hike-a-biking. Steep ravines, switchbacks and some deadfall across the trail make it a bit of a slow go. The bridge(inset right) spans over one of the deeper ravines in Devon Anderson Park. A few years ago it was not quite this deep. I think that the DART Green Line construction coupled with a new housing development above has led to some flash flooding along the trail during heavy rains.

Moving further south the smell of smoke grew stronger. As I rode into the meadow clearing at Devon Anderson, much of it was consumed by fire or was currently burning.

The fire had made it to the edge of the woods which are mostly cedar and oak. Moving southeast to northwest starting from an area nearest a trailhead junction. I imagine had it made it into those trees something far worse could have started. It appeared as though the fire probably burned for a long time. Some of the larger logs and branches were either just smoldering or out cold. With the wind direction, the homeowners never would have smelled the smoke.

Fire Station 34 responded to the fire and carried in water to put it out. This group of firefighters is also the Swift Water Rescue Team for Dallas Fire Rescue. They do some great work and really know the Trinity River. Got to talk to one of the firefighters for a few minutes and was really impressed with the professional knowledge he had about the Trinity and some of the lesser known parts of town in the riverbottoms.

I’m not familiar with streets or addresses in this neighborhood off the top of my head( I live in North Dallas) so calling 911 with a location was an adventure in itself. The fire was back in the woods a couple hundred yards away from the street. Getting out to the street the sign for Devon Anderson Park it read “1525 Devon Cr.”. Naturally, I called 911 and gave that address. Problem is, whoever installed this sign placed it in the wrong area. It should have been placed at another entrance to the park about a half mile drive away. I could hear the fire truck in the far distance yipping its siren for me but since I gave the wrong location, it took a couple minutes to get the address right. To complicate things, the bend in the road where this street is located sits at a street name and number change. It changes from Eastcliff to Umphress and the house numbers change too. I called 311 the next day about it. See what happens.

Also will be interesting to see what happens with this burned area. If it comes back as a thriving meadow or just stays a burned spot. The ground had quite a bit of moisture in it and the fire looked only burn the tops of some plants. Other places where logs burned, it scorched everything.

Below are a couple photos and a short video of the area in and around the Historic White Rock Spring. This is the site of Indian camps, Sam Houston’s campsite,founder of Dallas John Neely Bryan’s home and now a unique spot in Dallas. Always see something different every time I visit. In a week or two I suspect this whole area will be filled with black eyed susans. Wine cups will do for now 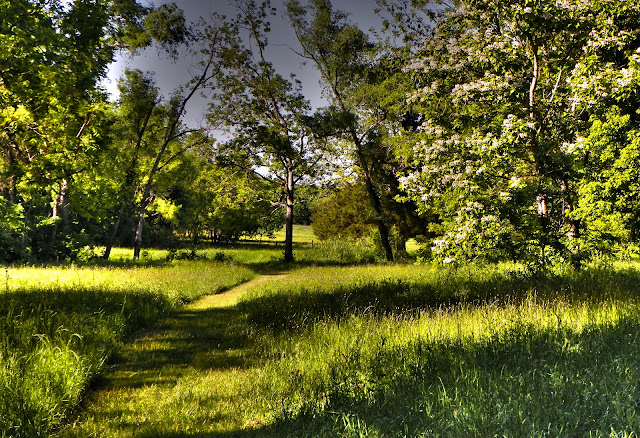 I also stuck an underwater camera in the spring itself, for about an hour. Turned the camera on and just let it run as I made a quick jaunt down to White Rock Creek. Hoped to catch on video some of the crawfish that live in the spring. Interesting to see all the minnows and the clarity of the water. Crystal clear. The head of the spring, a perched aquifer, flows directly from the bedrock about 20 feet away. Clean enough to drink from. On this particular Sunday afternoon, the air temperature was about 85 degrees and I would guess the spring water was at least 20 degrees cooler if not more. The glass on my camera instantly fogged as I pulled it out of the water.