The whole is greater than the sum of the parts. In order to grasp what the Trinity River and the Great Trinity Forest are evolving into one must think of the area as a whole. Not chopped and divided into small puzzle pieces. Maybe it’s another catch phrase I’m looking for…………..

….diversity maybe. A buzz word that has just about run it’s course. I think when one throws in the Trinity River with that it conjures up an unsettling cringe with most people. It’s a different diversity you’ll find down there. If you go looking for it in the Great Trinity Forest there is a chance you’ll find it. The diverse plant life, ecology and animals are a broad spectrum of Texas flora and fauna. What has been missing are people. Sure you can get thousands of people to the river for a widely publicized weekend party….but what about a regular old weekend? That seems to be changing. It’s neat to slowly see a trickle of normal folks like myself exploring the woods down there debunking the myths and legends of the Great Trinity Forest being a voidless place. Mark Louis, who many of you know as “Hawkeye” from his morning show on 96.3 KSCS with Terry Dorsey, has a great writeup on his website about a hike he took through Pleasant Grove’s Piedmont Ridge/Scyene Overlook, Buckeye Trail and the Audubon Center. You can read his write up here: Ever Heard Of The Great Trinity Forest. Check it out.

So much has changed that scenes depicted in these photos below would not be possible 3 years ago. Or even a year ago. They are places no one group can lay claim on. Places that the history is still unwritten since they are so new.

The Joppa trail ride and campout is probably the largest horse trail riding event in Dallas. With the campsite headquarters in the heart of Joppa it hosts over one hundred participants every year. Horses, mules, horse drawn wagons and atv support vehicles form a scene that many think is a sight one can only read about in the history books. Here the Texas spirit really lives. Do you call it a modern day version of a Mountain Man Rendezvous? Not much has changed.

Since the horse was introduced to Texas by the Spanish in the 1500s, man has been riding on by horseback on the Trinity. The photo above and inset left are in a part of the Great Trinity Forest near Joppa where Honey Springs once ran into the Trinity. Wandered over by the Caddo, Spanish, French, Comanche, Mexicans, Texians, Texans, Confederates and Americans. Here. Right there. All left their mark. A kick or two with your boot heel and you can find artifacts in the riverbank from half the groups I listed.

Like the explorers of yesteryear, the 2012 trailriders hail from areas all over the map. Speaking with many I was surprised how far many traveled to ride the Great Trinity Forest. The Joppa residents are always great for conversation but I learned so much more from some really interesting riders. Waco, Athens, Frankston, Marshall, San Angelo, Wichita Falls, Houston and points in between. There was also a group there from Tennessee Colony, Texas. Like Joppa, it was carved out of the deep Texas woods a century and a half ago. A real struggle of a place to live after the Civil War and a fascinating history to read up on. The parallel stories of fights against the railroad, the river and socioeconomic inequality. Great off the radar history and stories many of which are not written but told orally through stories and recollection.

Above is a short clip of a portion of the 50-100 trail riders coming through the Trinity River Wetland Cells between Loop 12 and Old Central Expressway. The Corps of Engineers has started an aggressive mowing campaign against Giant Ragweed(Ambrosia trifida) in this area. Overrun by the plant in the summers it is now kept in check allowing for shorter native grasses to grow. Seems to be working. The last couple years riding a horse, mountain bike or even walking through some areas would be impossible.

These are the kind of events that the city government should embrace. Sure the mega-million horse park project would be nice but do you need  a facility like that to ride a horse around on the river? People are already doing it. Grassroots style. The city should find out how things like this are so much fun and draw people from so far away. 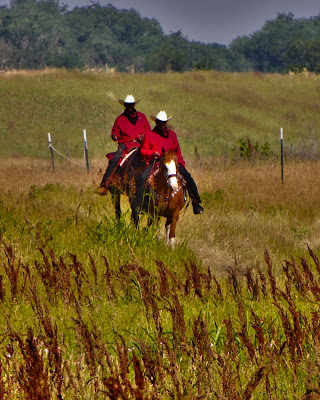 See Joppa Before It Changes

Joppa (pronounced Joppie) has been forgotten and ignored for so many decades that it has now become one of the best preserved Freedman’s communities left in the United States. Founded in the 1870s by former slaves of the Miller Plantation the roots stretch deep into Dallas history. Some may visit and see dilapidated shotgun houses and homes far past their expiration date. What I see though is how they are woven into the fabric of the neighborhood like old antiques in an attic waiting to be thrown out. Drive down there. Cross the Linfield Road Bridge. See it. Get out and walk around some. The city and Habitat For Humanity have plans to build new homes there soon. While seeing the shotgun houses and old chicken coops disappear is a good thing, I think some of the soul might go with it. Go see it. What is Joppa? Zack Canepari spent some time down in Joppa a couple summers ago to document the community for Habitat For Humanity. It’s really cool to see his photos since you can go down there right this minute and visit with the same residents he did. They all have stories to tell, great ones, if you will let them borrow your ear.

Giddy up and moving on…..all these photos were all taken in the span of a few hours. Mountain biking down the river from White Rock Lake, a visit with the trail riders in Joppa and then a fast ride up the river to the Calatrava Bridge to see the moonrise…..

Other than the blockbuster fireworks show or wind festival type events I always had the prairie flood plain near the bridges to myself. Last summer while photographing a similar moonrise, no one else was around. Every so often I would look over my shoulder to double check to make sure I was not in someone’s shot. Nope.

As I rode up the lower levee road from the Santa Fe Trestle Trail I was surprised to see so many photographers lining the levee. Shocked really. Happy.

Many seemed somewhere between the serious amateur and the professional level with all their gear. I had planned on meeting David Mimlitch(see below) to shoot the bridge after dark. We had met down there before for a star trail project he was working on involving the bridge. At night, lingering there alone is not a good idea so it helps to have company along. This time it was not needed since such a crowd had gathered. Like the horseback trail ride in Joppa an hour earlier, the Supermoon and the new bridge attracted people from all over.

One photographer, a recent transplant from Arizona to Dallas(I forgot his name and I kick myself for not remembering it) was assembling a set of ladders and horizontal boards for a set of levitation shots using a female model near the Pavaho Pump Station. The bridge, moon and skyline forming a backdrop with the model appearing to be suspended in mid-air. Another couple guys Dennis and David were retirees from Sachse. Their claim to fame was storm chasing. Or storms chasing them. In one of their more recent tornado chases they were in the vicinity of the Lancaster truck terminal when the tornado hit sending tractor trailers airborne. When retelling their adventure, they made a point to show how far over their heads the trailers were as they watched. Awesome story and awesome people.

The guess work of figuring out where and when the moon/sun rises and sets has been a mystery and hard work. Most people now use The Photographer’s Ephemeris to plan their shoot. Handy. I saw a number of people iphonin’ on the levee trying to figure out where the moon went to.

Following the moon as it rises through the bridge is actually not as boring as it sounds. Since the perspective of the moon is being viewed through distant objects, you can watch the moon move with your eyes. To keep the same shot, you need to be constantly moving down the levee, up, around side-to-side. Sunday June 3, 2012 and Monday June 4, 2012 are the next best chances to photograph the moon rising through the bridge. Next month will be almost straight up and down the river and Crow Park will be an excellent vantage point I think. Maybe even further back towards Mockingbird/Westmoreland.

Night Photos Of The Super Moon Over The Trinity River

Joining me at the Margaret Hunt Hill Bridge was David Mimlitch. He has more photos of the Margaret Hunt Hill Bridge, Crow Park and the green space between the levees than anyone else. His true niche is aerial photography using a rather large remote control aircraft with a Canon digital SLR camera mounted on the front. With that aerial setup he won honorable mention in the Trinity River Photo Contest last year featuring the Santa Fe Trestle Trail and Standing Wave.

Below are a couple of his great photos more of which can be found on his flickr page Dave Mimlitch’s photo stream . He has all the fancy camera gear that I lack for shooting photos at night. Below are some of his great photos taken from the levee in the vicinity of the Pavaho Pump Station.