You probably don’t know Michael.  But you have seen the impact he has made in Dallas. He’s one of the bike advocates behind cool ideas like bike racks on DART buses and clam shell storage lockers at train stations. I’d also take a good guess that he is probably one of the highest mileage commuting cyclists in DFW. Probably north of 150 miles a week, year round. Riding from his home in Garland out to the Irving/Las Colinas/Coppell area daily to his job. Married with children, survivor of Crohn’s disease and a cancer scare….he’s a shining example of someone who has overcome enormous personal adversity to do what he does. He’s one of the best at it. Dallas is a better city to live in because of him. Hard to find people that give back like that. Who practice what they preach. Who practice what they practice.

When people say they can’t ride a bike to work, have health issues or have too much going on in their family life to ride a bike….I use Michael as an example. He’s my “I know a guy who ______”. He’s that guy.

It’s a cruel irony that during National Bike To Work Week and the day of the annual Ride of Silence that Michael finds himself in the fight of his life in the ICU at Baylor after being hit by a vehicle near Ferguson and Cotillion on the morning of May 15th while riding to work. Hit not far from his home. The laundry list of things he has broken is a long one. Neck, back, hip, pelvis, punctured lung, ribs, spleen. I have no idea how or why it happened. Just that if you have any prayers to offer, he could really use ’em.

UPDATE 5/17/12 5pm:
The link below goes to a secure website setup for donations to the family, started by the friends of the McNair Family

As you may know, the McNair family was rocked at its core yesterday morning when Michael, an avid and experienced cyclist, was struck by a car while riding his bicycle.
Michael survived the accident, but is in the ICU with fractures to his neck, back, all the ribs on his left side, his hip and his pelvis in multiple places – his lung was punctured by the broken ribs and his spleen was also lacerated in the collision. Due to the severity of his injuries, he remains sedated and on a ventilator, unable to breathe on his own. At this point in time, his recovery is expected to be a very long and difficult one.
Michael has always been a pillar of strength and support for his family – Heather and all 3 kids deal with the day to day effects of mitochondrial disease, a multi-system genetic disorder that affects them all in varying degrees of severity. Through all the medical trials, tribulations and uncertainty, Michael has been an unending cheerleader for the family – keeping them looking forward when the road is difficult. He is also actively involved with Make a Wish – helping to grant the wishes of other children who are facing the reality of a life-threatening illness. Now it is time for us to rally around him.
Needless to say, mom, Heather, and the kids, Chase, Madison and Abigail are reeling from this, both with what it means for their husband/dad, and what it is going to mean for the family long term.
Your prayers are greatly appreciated, but in the long term, your financial support will help them through what is undoubtedly one of the scariest situations any family member could imagine. The future is going to be uncertain as it is, let’s help them concentrate on recovering and bringing Dad home, and not on the financial pressures associated with a catastrophic injury.
Every bit helps… thank you for your generosity and your prayers.

Michael is one of the best equipped cyclists on the road when it comes to lights, visibility and safety. I have often poked fun at him for his really awful choice of neon colored clothes. The same clothes that make him visible for half a mile. He carries so many front and rear lights that his bike looks more like a taxiing airplane than a bike. For someone that is so over prepared for any possible contingency to be so injured in a wreck just really has me at a loss.

He has joined me on numerous trips down to the Trinity River. Going by the handle “MMACH5” he is well known in the cycling and geocaching communities. His handle is an acronym for the first letters of his, his wife, his three children’s names. 5 in all. Like the DART Committee he served on, he has also made the Great Trinity Forest a better place. Last summer he added the first geocaches to the Great Trinity Forest which can be found here MMACH5’s geocaches. Some unique spots like Joppa, the old Sleepy Hollow Country Club and the old Pig Rodeo arena in Floral Farms. He also has some in the Scyene/Piedmont Ridge trail areas too. 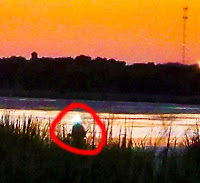 When the new Omni Hotel opened in Downtown Dallas this past winter I took a stroll through the lower floors checking out the photos that line the convention center hallways. It’s not this particular photo above but one like it of Lemmon Lake that hangs above a couch in one of those hallways with a teeny tiny Michael hidden in the foliage. Like a game of Where’s Waldo, Michael is often in these shots hidden somewhere. In the photo above, and magnified to the left, he is looking through the reeds of Lemmon Lake for alligators and alligator nests. Without him, my late forays into the nocturnal Great Trinity Forest would not be possible. He has a keen sense for reptiles that I lack. When the lights go out in the bayous, swamps and sloughs of the Trinity it comes alive with animals straight out of a PBS documentary. Loud and deafening. The late night photo trips and deep exploration into the forest last summer simply would not have been possible without him along. If you like the photos and videos of the random stuff I found last summer, thank him, not me. No way would I have crossed into that true wilderness without Michael. 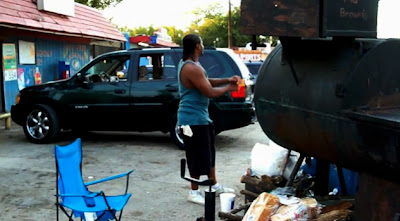 Here’s to hoping that he gets on the mend soon. “People Call Me Clint” who sells BBQ in the Bon Ton(best BBQ in Dallas hands down, it’s East Texas style) has been wondering about Michael and where he has been. It’s gonna break that guy’s heart when I tell him.

Say a prayer for Michael. Throw a penny in a wishing well. Rub a Budda belly and think of him. I know I will.