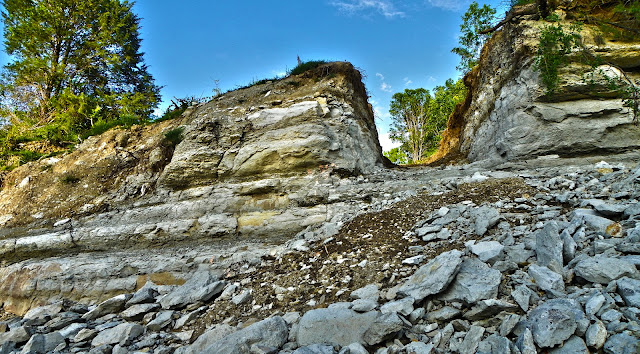 By any measure, it has been a rough eight months for what many consider to be the only natural crown jewel of the Trinity River in Dallas, McCommas Bluff. A postcard picturesque chunk of hill country real estate sitting in the middle of what is otherwise a muddy river bottom. Fossilized sea creatures the size of hubcaps line the rock. Wildflowers grow on the cliff tops. Coyote calls echo off the bluffs almost every evening. A timeless scene that is quickly vanishing.
It started back last summer when Dallas Water Utilities began a pipeline reinforcement project for a 72 inch water main that meanders along the river. I have said in the past that you have to break some eggs to make an omelette. I’m not an engineer, hydrologist, pipeline expert or claim to be one. I do know a mess when I see one. It’s apparent now that this whole foray into messing with the river is getting into the realm of the absurd. I believe the dawn of something stupid is on the horizon.
I planned on filling this post with photos featuring the bumper crop, maybe once in a lifetime crop of Foxglove Beardtongue growing along the cliffs. The showy 3 foot high plants respond in an exceptional manner to a prolonged drought followed by a wet winter. That enthusiasm gets diluted quite a bit when I see the river in a larger scope. 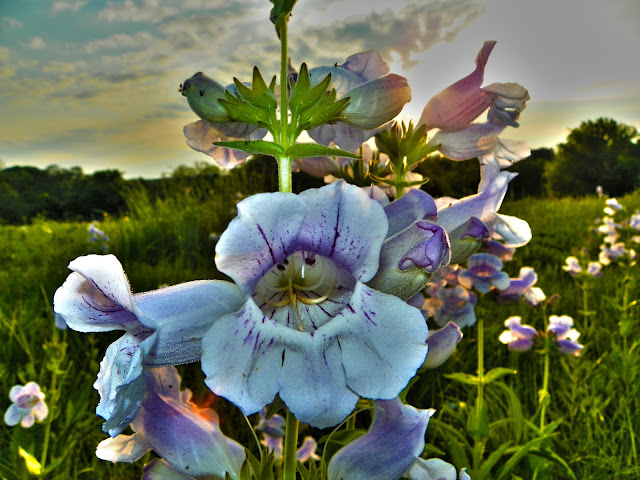 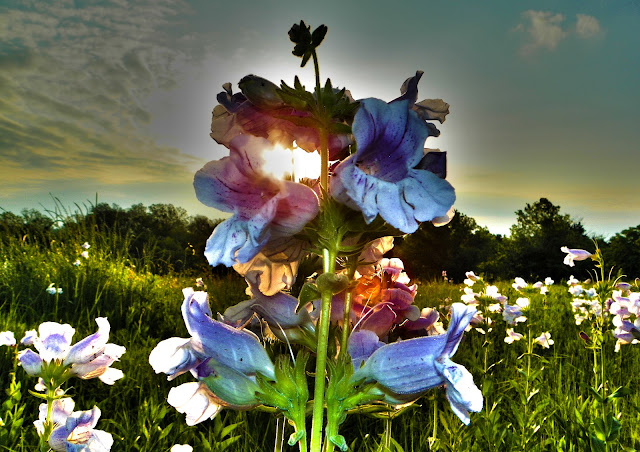 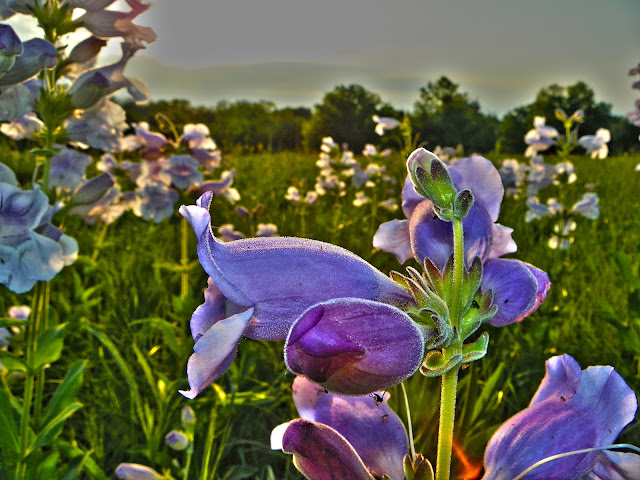 Members of the figwort family, these perennial flowers prefer the rocky cliffs limestone outcrops and near bear soil one can find on higher ground in the Great Trinity Forest. They go by Prairie Penstemon, Foxglove, Foxglove Beardtongue, Prairie Beardtongue  18-30 inches in height, these plants produce flowers up and down there stems in April through May. Since this spring was warm and wet, the flowers are earlier than normal. Actually, they are very prolific this year. Growing in places I have never seen them before.

Foxglove often share the same soil profile with flowering yucca and can be seen simultaneously this time of year at McCommas Bluff and the Scyene Overlook.

Also a banner year for pink evening primrose Oenothera  speciosa as seen below. Open fields are carpeted with them at the moment. Enough so that a walk or ride through them will leave you yellow with pollen

Lingering Effects Of The 2011 Texas Drought

McCommas Bluff Preserve is rarely visited and few if any people visit the secondary entrance to McCommas Bluff on Fairport Road. The preserve begins where Fairport dead ends. A recently constructed yellow gate blocks vehicle access to the woods. You need to either park and walk-in from there or make other plans. This was the proposed site of Trinity City. A long forgotten platted town in the Peter’s Colony that hoped to serve as a port city on the Trinity River. It never happened. Over the last 150 years this piece of land had buildings, a couple post Civil War factories and an animal rendering plant.

The topography is a gentle slope, declining down towards the river. Borrow pits were dug in the 1800s to level the land off in a stair step set of terraces. This built up a profile of 100 yards of flat ground, followed by a descent and abandoned borrow pit, followed by more flat terrain. The borrow pit areas are now ponds during wet weather. To get a feel for this terrain, I have posted the video below which starts from the Fairport gate down to the river, then parallels the river for a distance downstream towards the cliffs at McCommas Bluff. Easy to access in drier weather from the Audubon Center too.

This upper portion of McCommas Bluff Preserve suffered heavily during the 2011 drought. Where most lowland areas in the Great Trinity Forest were buffered by damp soil, this particular upper terrace area saw many smaller trees die off. The photo of the pond above illustrates that well with a number of trees not coming back this spring. The pond went dry in late spring of 2011.

What In The Wide Wide World Of Sports Is A Goin’ On Here?

Getting back to the construction. I gotta wonder. What is the method to the madness in all of this? The city says this marring of the landscape was needed to protect a 72 inch water main that runs down to the southeast waste water treatment facility in southeast Dallas county. Time was of the essence it seemed a year ago with potential erosion of the riverbank exposing the water main to problems. Fair enough. But the construction has been anything but fast and has eroded more riverbank than it has fixed. Not much has happened at all. Other than some large holes punched into McCommas Bluff large enough to drive a semi-truck through.

Much of this area was supposed to be protected as part of a US Army Corps of Engineers Mitigation Area. When the McCommas Bluff Landfill was expanded around 5-7 years ago, it ate up a good chunk of wetlands, forest and prairie. To mitigate that per a 2002 federal law, a special area was set aside and re-engineered for the purpose of the habitat loss…… 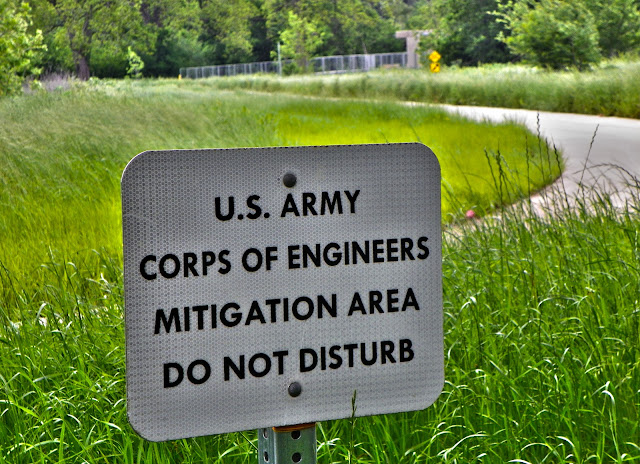 As a reminder of where the area is located, a host of signs every 50 yards or so line the area that is not to be disturbed. The sign above is located near the Trinity River Trail and bridge(in the background). The Trinity River Audubon Center is about 1/3 of a mile from this sign on the other side of the river.

Fine and dandy till the 72 inch water main project started last summer. The idea is to rock armor the riverbank using chicken wire boxes filled with baseball sized pieces of concrete. Put enough chicken wire boxes filled with rocks together and you have a wall. The current construction, started last summer spans about 1000 feet of riverbank. Seen below, you can see the workers installing course after course of rock. 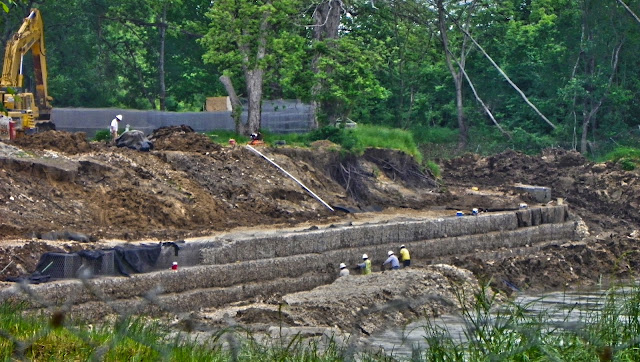 A wider view and you can see the large scope of the project. The workers and their equipment are at the very far end of the photo in the distance. Big project. Slow project. Takes a long time to do something this large. Going to be a long time before this wraps up.

Seems to me that the construction would finish a current project before starting on another. Last weekend I was puzzled to see that while construction had still not finished at the original site nor at the large holes chopped in McCommas Bluff, someone had taken the liberty of clearcutting another 1000 or 2000 feet of riverbank downstream. 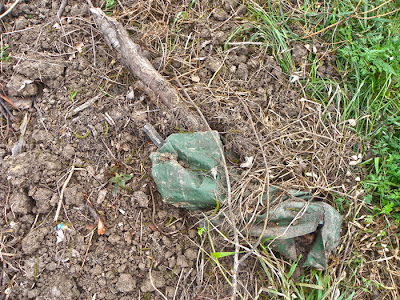 The clearcutting extends from almost the new Trinity River Trail bridge down to McCommas Bluff. Strange thing is that this is in the Corps of Engineers Mitigation Area and some of the trees bulldozed were planted for compliance with the mitigation law. Some still have the green tarp material around the base of the trunk for irrigation. Puzzling. 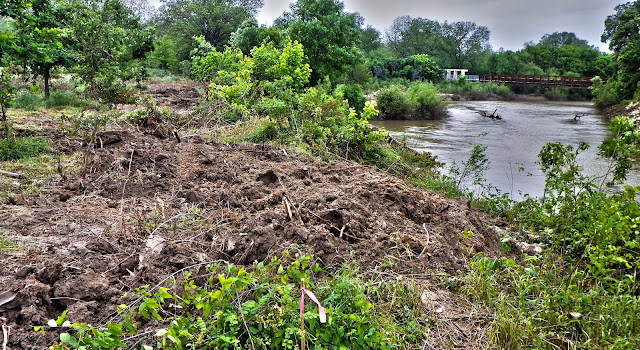 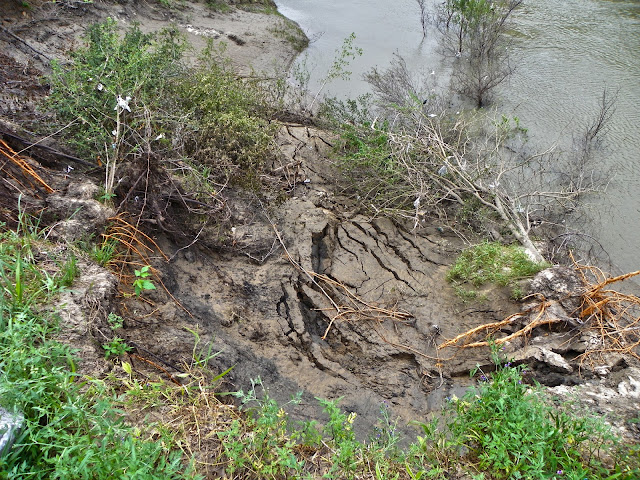 If erosion control is the purpose here, why did they push so much of the bank and trees into the river? In some places doing this shed 4-5 horizontal feet off the bank. 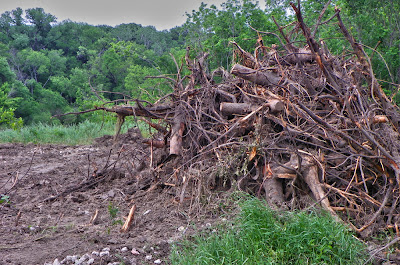 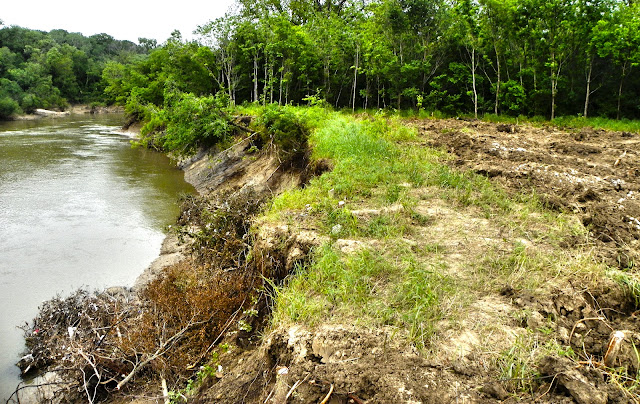 Here you can see where the clear cutting stopped. What it looked like before in the background, versus what it looks like now in the foreground after the haircut. I’m sure there is a very logical reason for this. One above my brain level to comprehend. One that involves protection of the water main from erosion. Well…I got to thinking, has the river ever changed course through here? The solid limestone cliffs are just around the corner from here and serve as an effective barrier to any change in course. I also can see from this bend in the river, the original 100+ year old log moorings on the opposing bank for the riverboat landing used by excursion boats that took day trippers from downtown to the picnic grounds here. I pulled photos of the bend in the river from 1957 through 2011 posted below.

I’m just not seeing it. maybe it’s my untrained eye. But I cannot see any difference in the bend now than the photos above. Oh wait. Yes I can. You see when they bulldozed off the bank, they took 4-5 feet of bank with it. Maybe a couple hundred years of erosion done in just one afternoon. Congrats! 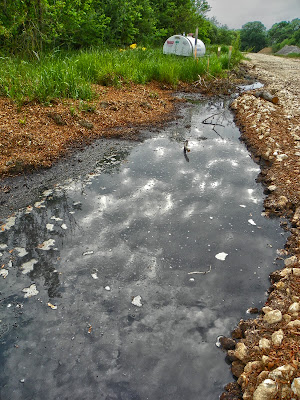 I wonder if it would just be easier to just rebuild the whole pipeline? Seems that someone decided the river was the problem and the pipeline is the victim. I think it’s the other way around. I don’t want to see a concrete rock lined riverbank every time I cross that new million dollar bridge from the Audubon Center. If the pipeline was flawed in design, start over. It would be quicker to rebuild it farther away than fix a problem like this. The original project has seemed to lose its compass and over time with periodic flooding and maybe some sloppy on the job stuff accidents happen. Like this diesel fuel watery polluted mess.

Don’t start new problems when you have not finished the old ones. I guess. Maybe I’m wrong here.