The Comanche Legend of the Indian Paintbrush 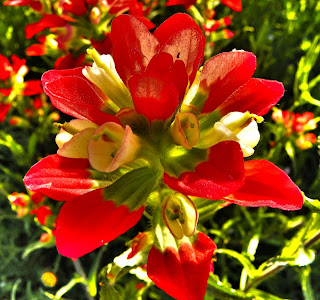 “Little Gopher had a dream.  The vision told him to find a white buckskin and keep it.  One day he would paint a picture “that is as pure as the colors in the evening sky.” Although he found the buckskin, Little Gopher could not find the right colors. However, one night a voice told him to go on top of a hill the next day at sunset. The voice said, “Because you have been faithful to the People and to your true gift, you shall find the colors you are seeking.” The next evening, Little Gopher found paintbrushes the colors of the sunset all over the hill, and he painted his masterpiece. When he returned to his tribe, Little Gopher left the paintbrushes behind.The next morning the paintbrushes were all over the hills and had turned into beautiful flowers.  Little Gopher became known as “He-Who-Brought-the-Sunset-to-the-Earth.” —Comanche Nation

For most, the view gazing out over the Trinity River from the paved Buckeye Trail Overlook or Audubon Center Overlook would fulfill what they hoped to see when they visit. There it sits. Snap a photo. Foursquare it on Twitter. Leave. Mission complete. I would hazard a guess that 99% of the visitors to the Great Trinity Forest never venture beyond the established trails of the Buckeye and Audubon. 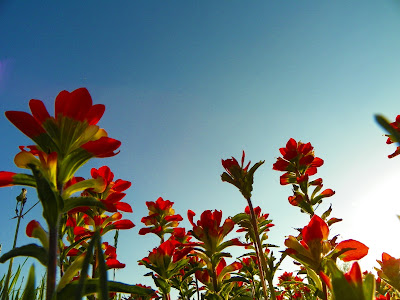 Someone unfamiliar with the Great Trinity Forest will find themselves perplexed with the random ongoing construction that seems to plague the larger infrastructure projects that were slated for completion years ago. Along with other regular visitors, I have grown somewhat frustrated with the slow pace of some projects. It has created an uneven balance between completed projects grand in scope that sit marooned behind never ending public works projects. The bond money for these projects were allocated many years ago. It’s the execution of the construction that is holding the works up.

Some of the concrete paths were completed in 2009 but lack a real purpose until they connect with the Audubon Center. It leaves you scratching your head. Wondering when and if. Life goes on though and for those familiar with the woods, the spring is the best time to visit with mid fall a close second.

For those willing to make the jump to the other side of the river, a new world opens up. One where the khaki bird watchers are left behind for spur wearing cowboys. The folks in the photos here are friends of mine, people I have gotten to know on the “other side” of the river from the Audubon Center. Really neat to see them together on a trail ride. Usually I see them in groups of two or three on weekend evenings. So to see literally everyone together is awesome. I think the riders in the photos represent half of all the people I have ever seen in the Great Trinity Forest on this side of the river. No one else really goes there.

Across the river from the Audubon Center 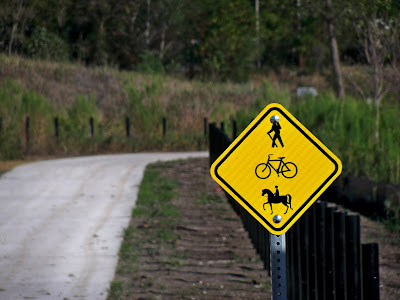 The new multi-million dollar trail near the Audubon Center is finished on the north side of the river. So is the bridge. The hang up is a couple hundred yards of never ending construction on the south side of the river for a water utilities project. 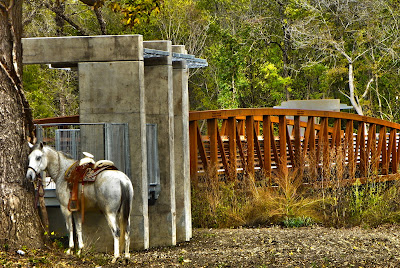 Once completed the access to the south side of the river will really open up some true wilderness to those willing to cross the bridge. Deer and pigs run free here and are a common sight. 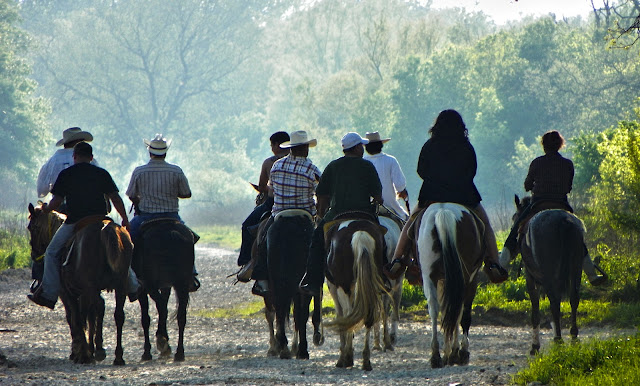 Last summer when the bridge above was finished, I mentioned to the horse guys that they should ride over to the Audubon Center to introduce themselves to their new neighbors. They got dressed up and rode over on horseback. Unknown to them, the afternoon in question, the Audubon Center was hosting a runway fashion show. I’m not sure exactly what happened but they were received somewhat on the chilly side. The horse rider folks know all about the river and the wildlife. I know they would rather be a part rather than apart from all the signature projects across the river. Excellent resource, especially as bilingual guides,  if anyone bothers to ask them. 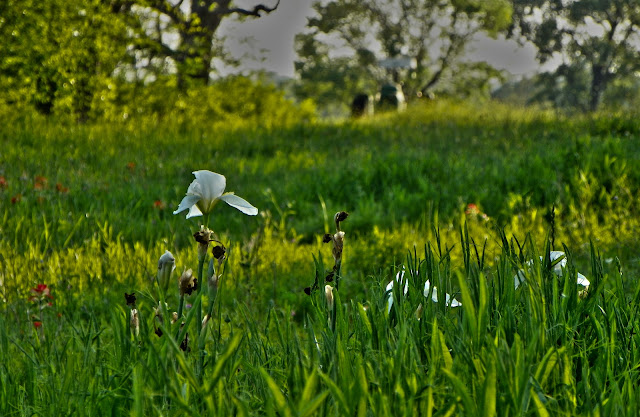 Along the new concrete path, which is what I guess will be called the Great Trinity Trail, remains of old farms are all but vanished. Left behind though are the spring Iris and other perennial bulbs that were once part of some farmer’s front yard or garden. Like the one above at the old Truck Farm Trail site . 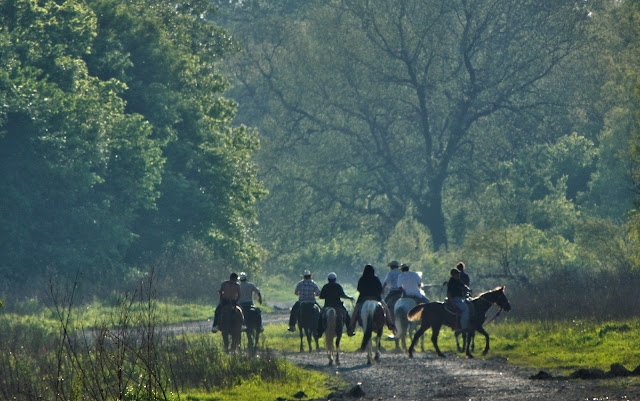 The trail and parallel access road sits close enough to the river and Lemmon Lake that animals cross it constantly. This large turtle above, a Common Snapping Turtle was on the trail in Mid-March. It looked like it was out to lay eggs. Weighing in well over thirty pounds+ this was a beast of a turtle. Many of these turtles resided nearby at Lemmon Lake until the 2011 drought dried up the lake bed. Turtles such as these became trapped in the deep mud unable to make the 150 yard journey to the Trinity River. With some help and a few shovels we dug many turtles this size out of the lake and put them in the river. I would bet this is one of those turtles.

Somehow this concrete path has stayed off the radar since it was completed in 2009. Much of it was cut right out of very dense forest following a century old dirt path used by fish camp leaseholders at Lemmon Lake. Seeing little use, the forest is slowly reclaiming what was built just a couple years ago. A segment north of River Oaks Park even traverses over a swamp labeled the Otter Pond.

With just a couple hundred more yards of concrete construction this path will connect the Loop 12 Boat Ramp trailhead at Little Lemmon Lake with the Audubon Center. 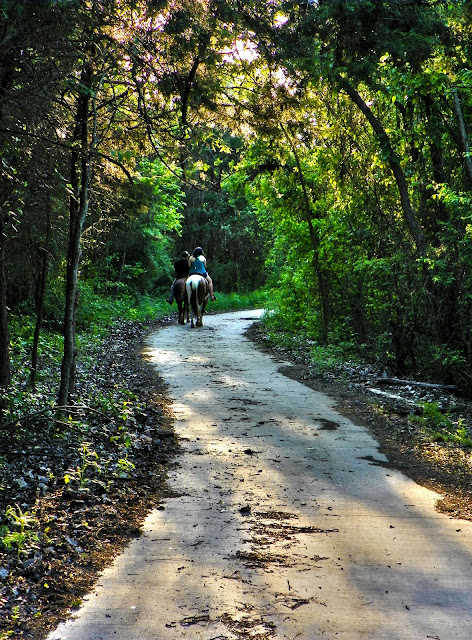 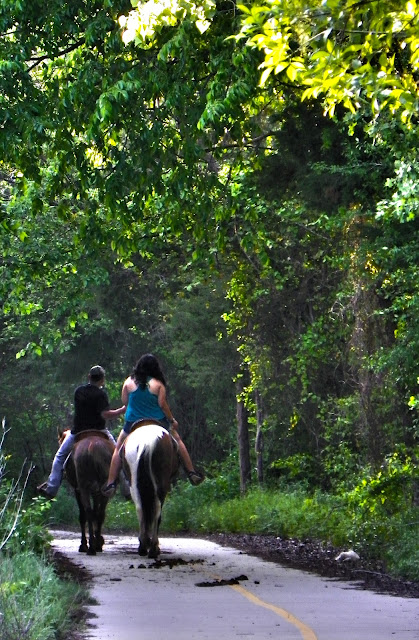 This is the land that sits on the south bank of the Trinity River facing the Buckeye Overlook. During the winter it’s possible to catch a glimpse or two of the lakes. The lakes are narrow and long cascading from one to the next in a chain stretching from I-45 to Loop 12.

In 2009, the area was sown with oats and rye grass which made for easy exploration of the hundreds of acres here. Later that summer, ragweed started to take over, making much of it impossible to wander in. By 2010 the ragweed was out of control, 8-10 feet high in many areas. In response, the Corps of Engineers is trying to rid this area of ragweed and converting it into a native grassland prairie. So far this year, 2012, it seems to be working. By mowing in 2010 and 2011 prior to the ragweed going to seed, the life cycle of the weeds has been dramatically curtailed. I hope! I use the dirt road and trails of the chain of lakes to make it on my trip down from White Rock Lake to the river. Jumping the guard rail at 310/Overton then down the lakes to Loop 12 and Joppa Preserve. 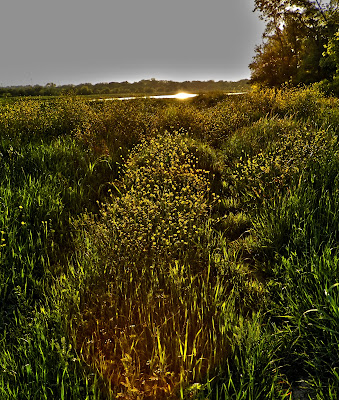 The chain of wetlands attracts more and more birds every year. Many that are rare for North Texas. A similar wetlands, the Bunker Sands Wetlands near Seagoville attracts bird watchers from all over. The chain of wetlands here in Dallas could be similar if more people knew about it. Same birds show up both places. Just a perception problem on the part of the people who visit.