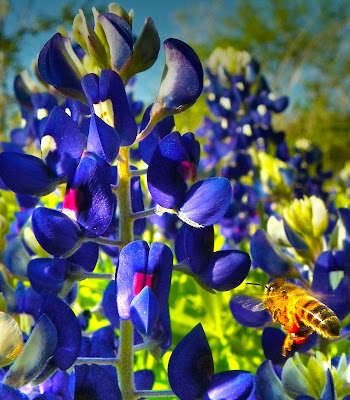 The Comanche Legend of the Bluebonnet

The Texas fields are covered
With a blanket of deep blue.
But for a little Indian girl,
This would not be true.

Texas land was buried and dry.
Rains just would not come.
Indians danced and prayed for rain,
And beat upon their drums.

The Chief made a proclamation.
He appealed to one and all.
A prized possession must be sacrificed
Before the rains would fall.

The Indian camp was silent,
While each person searched his heart.
But when it came to sacrifice,
With possessions they would not part.

Suddenly a little girl stepped forth,
Holding her blue-clad doll.
She placed it in the roaring fire
and raindrops began to fall.

The rain brought forth the grass,
Among its blades, flowers of blue.
To be a sign for all the time
Of a love so pure and true.

That old Comanche parable rings as true today as it did dozens of generations ago when the Comanche told it around their campfire. Drought and flood, famine and feast is natural to Texas. With higher than average winter rains the bounty of wildflowers this year along the Trinity River in the Great Trinity Forest is the best I have ever seen. Despite the forecasts of a drier and colder winter the DFW area saw one that was warm and wet. Thus set the stage for an early spring. The heavy rains and regular flooding of the lower areas in the Great Trinity Forest have re-directed much of my mountain biking into the upland areas that are not prone to prolonged flooding. I’ve never messed around with the macro settings on my camera since I usually only stop to photograph things with four legs. The muddy conditions gave me a chance to stop and smell the roses for once. The photos in this post were taken over the weekend of March 24th-25th and highlight the Lower White Rock Creek Trail, McCommas Bluff Preserve and the Texas Buckeye Trail.

McCommas Bluff has seen its share of hardship the past year with the city demolishing some of the historic trademark cliffs. Upstream some of it still stands untouched as the river begins a gentle bend to the west towards the Audubon Center. 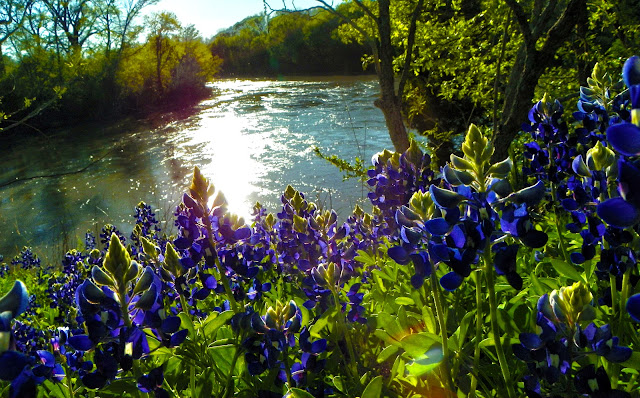 Among the terraces of McCommas Bluff on the old Trinity City ghost town site, a meadow of poppies grow 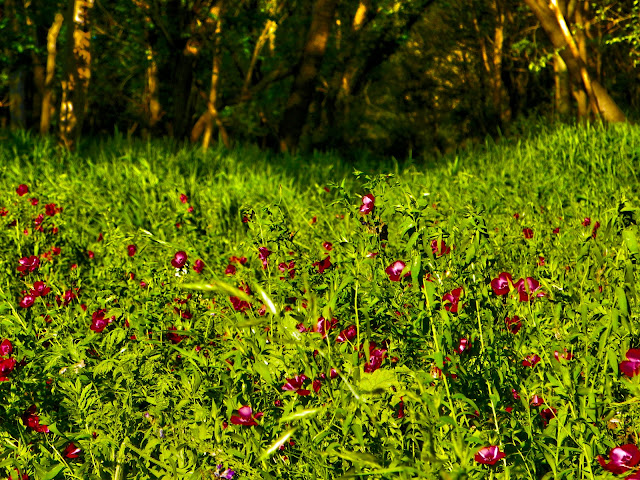 Sometimes I pat myself on the back thinking about how cool it is to be the only person seeing this stuff and realizing how lucky I am to experience things no one else will. I was having one of those pat myself on the back moments when in the far distance down river I heard boat motors. Up the river come two guys at thirty miles an hour on jet skis! Man. Talk about raising awesome bar to a new level. Below is video I shot of them headed up river. Only in Texas!

Donned in wetsuits and goggles, they were taking advantage of the Trinity River in flood stage. That evening, the river was still in flood, about 12 feet higher than normal. This allowed them to navigate over the McCommas Bluff Lock and Dam #1 without issue. During normal water levels, this would not be navigable to small boats or even canoes.

That is some real out of the box brainstorming to pull off something that awesome. A place to launch or recover watercraft is miles away in any direction. Very difficult conditions if something goes wrong. Logs the size of couches, whole tree trunks and even floating ant balls went cruising by in the current. The amount of skill it takes to ride up the river, the Trinity River, takes a lot of nerve. It’s interesting that I keep on running across people like this down there. I know people, friends of mine, who go to the Amazon to find adventure like that. It’s in their own backyard. This place is a ten minute drive for a million people. 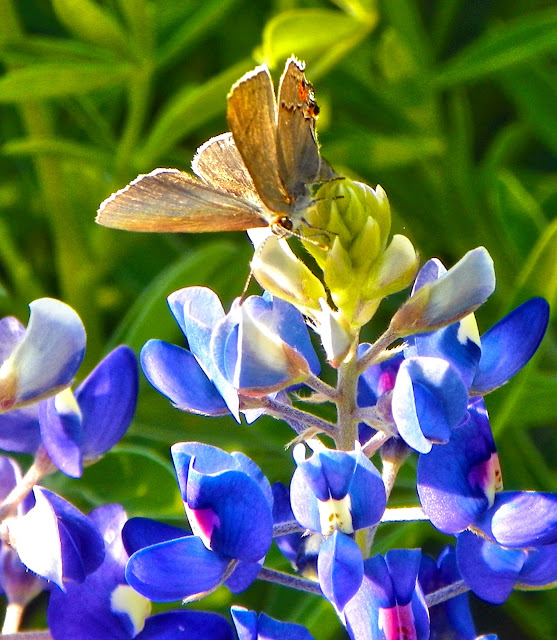 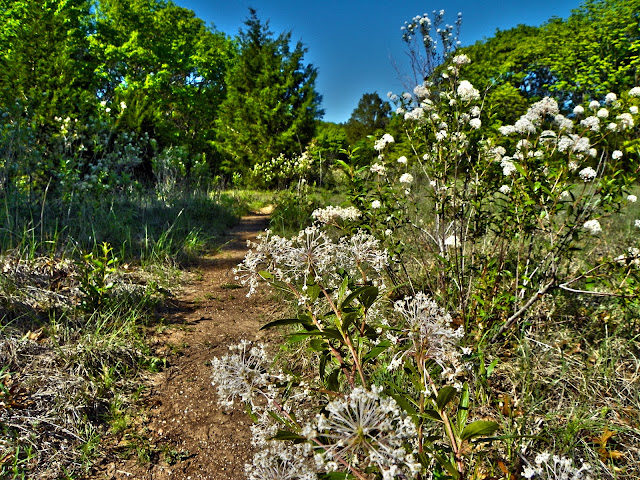 The Piedmont Ridge Trail sits on a high chalk escarpment overlooking White Rock Creek between Grover Keeton Golf Course and Bruton Road. The trail climbs up some switchbacks to the top of the ridge. This trail is usually combined with the Scyene and Devon Anderson Trails since they all link together. I believe this flowering shrub which is blooming everywhere along the trail is Texas Torchwood. I could be wrong. 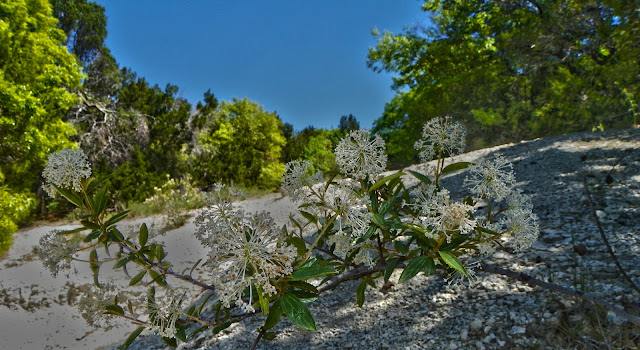 Anchoring the south end of the Devon Anderson Trail is the Comanche Storytelling Place. Shaped like an amphitheater, the natural limestone rock bowl was recognized by the Comanche Nation in 1997 as a sacred spot to their people. 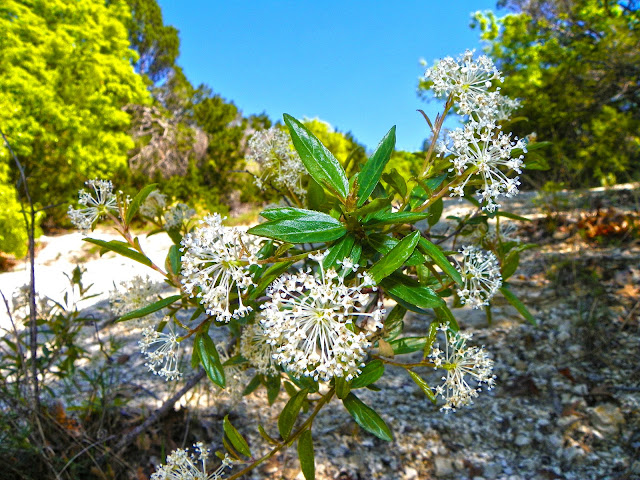 Within 100 feet or so west of the Storytelling Place is the Storytelling Place Red Oak. Listed in the DFW Tree Registry as holding not just historic status but also one of age. It grows on near bare limestone and while only 25 feet tall has a massive trunk base. Estimated at hundreds of years old, it is probably one of the oldest trees in Dallas. Nice to see these bare soil trees to pull through last years drought.

Like the Comanche, Texans have their own legend about a bluebonnet, the Pink Bluebonnet. Only place I have ever seen these growing in a native environment is at Scyene Overlook. 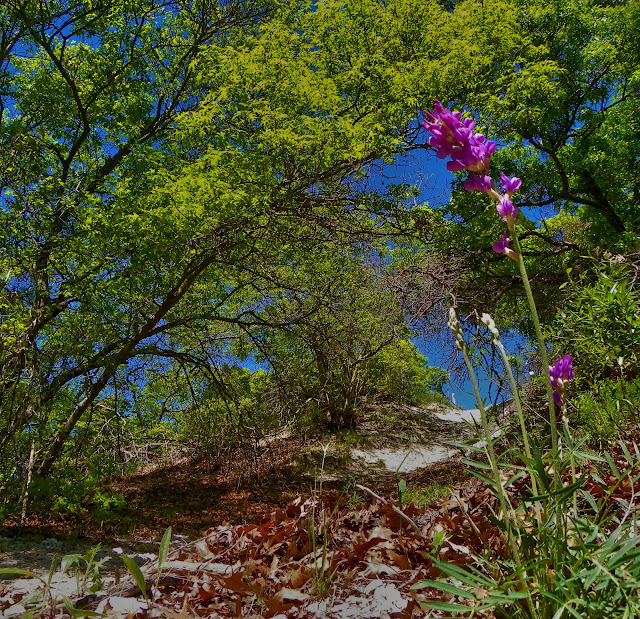 These pink bluebonnets are located in very poor soil downslope of the Scyene Overlook, on the south and southwest facing slopes.

Rounding out a look at the early flowering plants of the Great Trinity Forest is a very wet, very muddy jaunt down the Texas Buckeye Trail to the Buckeye Grove. I second guessed myself a couple times as I waded through a mile of shin deep water and mosquitoes to the grove. I was rewarded with what you see in the photos. A large Tiger Swallowtail feeding on the sole remaining Buckeye Tree flower.