The lengthening shadows of autumn and the cold crisp of the morning dawns are slowly ushering in the birds of the Canadian wilderness into the Trinity River Wetland Cells. The muted squawk calls of tropical storks and spoonbills are replaced by the cacophony alarm calls of ducks and cormorants.

These are the early arrivals. The Mallards, Wood Ducks, Teals, Coots and Cormorants who arrive in late September and leave around Easter. In larger numbers around Thanksgiving the Northern Shovelers, Ruddys and Canvasbacks will appear in great numbers if form follows the past several winters. Late October is a great time to get your bearings down here and the vegetation along the edges of the cells still provides great cover till the first frost. 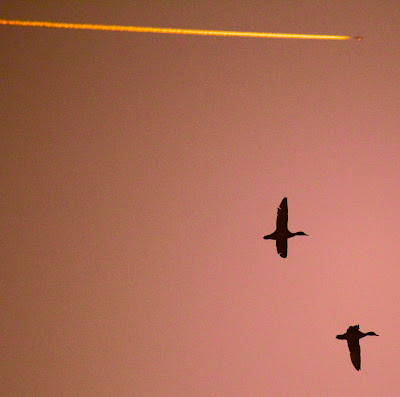 Access to the Wetland Cells is easy. One can park at the Loop 12 Boat Ramp lot on Great Trinity Forest Way. Then walk up the embankment of the divided road, entering the Wetland Cells via the old Sleepy Hollow Country Club parking lot. Currently the gate is broken at the Sleepy Hollow entrance, the weld failed on the padlocking portion of the gate. In theory one could park on that old Sleepy Hollow parking lot but I’d discourage it if you follow the letter of the law.

The other parking option is in the Freedman’s Town of Joppa, where Fellows Lane dead-ends at a bar gate 4900 Fellows Lane. Like the bar gate near Loop 12(Great Trinity Forest Way) this entrance has also been undermined to some degree. Though the gate is locked, one can navigate through the vacant lot to the west and then into the Wetland Cell 4×4 roads. This footprint of vacant lots will eventually become a gateway park for Joppa into the Wetland Cells. More about the interesting twists, turns and hurdles this park might face can be read about on the Dallas Observer website in an article To Build Joppa Gateway Park… 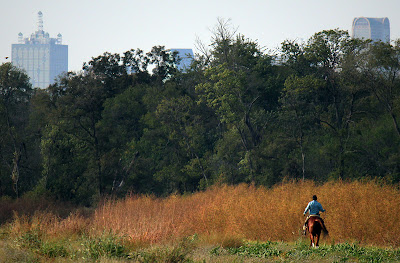 This is also one of the few areas currently accessible for horses. Using the workaround on Fellows Lane you can get into the wetland cells via horse without an issue. The old access roads are horse friendly and routinely ridden by locals that live in the area.

—
If one wanted to see this with a group, next weekend, Saturday November 3rd the Corps of Engineers will host an informative hike at the Fellows Lane entrance. Their information for that event is below: Gather/park at the end of Fellows Lane in the historic Joppa neighborhood. Tour leaves about 8 a.m. through the gate to the nearby wetlands. Dr. Gary Dick, a research ecologist for the Corps of Engineers in Lewisville, will lead the tour of the Trinity wetlands. They were designed by the Corps for the city of Dallas to lower flood risk and create a quality grassland and aquatic habitat that provides food for both migratory and resident birds. Jane Ramberg, of Trinity Bird Count, will lead efforts to record what species can be spotted in this zone of the river basin in Dallas County to continue building an important historic record. Bring good hiking shoes and suitable outdoor apparel – and your binoculars. Contact: Jim Frisinger, U.S. Army Corps of Engineers, 817-901-9644 james.c.frisinger@usace.army.mil
—

The ducks are not the half-wild birds of White Rock Lake looking for a sack full of Mrs Bairds. They are as wild as they come. The only way to get close and get a good look at them is to get to the Wetland Cells thirty minutes before the first crack of dawn -or- be in the Wetland Cells and stay put an hour before sunset. During these times the birds move around quite a bit and offer the best views as they awaken to start the day or preen themselves for the evening. 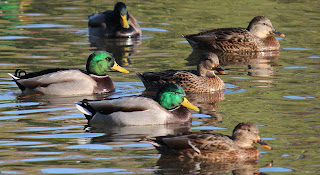 Timing and patience is everything. Without treelines and brush to hide your approach, the sightlines of the wildlife can be 400 yards are more. Even at the limits of their sight, they will readily take flight at anything resembling a human form. The ducks above flew into the wetland cells from the east around 45 minutes prior to sunrise. Coming in staggered groups of six to eight they formed an impressive collection by the time the sun rose over the riverbottom.

I would estimate the current cormorant population here of 300-500 birds. They arose later in the morning than the ducks, right around sunrise. Taking off in flights of three dozen or more at a time to feed for the day. Less timid than their waterfowl counterparts the cormorants seem to be much more tolerant of a human observing from a distance. 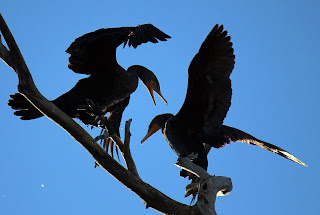 The cormorants here seem to just roost in the trees and do most of their fishing on the actual river instead of the Wetland Cells. Last winter I saw a great number of cormorants fishing a large shoal where White Rock Creek feeds into the Trinity. The quarry species looked to be shad that day and I expect the cormorants feed mostly on that species in this part of the river.

The flock returns to the roost around an hour before sunset in groups of no more than four or five. The view on a clear evening of this ingress of cormorants is best viewed from atop the “pyramid” feature. From here one can spot the birds over half a mile away with Downtown Dallas as a backdrop. 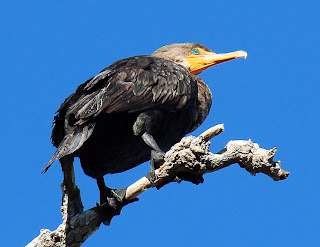 Cormorants consume a couple pounds of fish per day. Some parts of the country consider them a growing nuisance in the summer months when their roosting threatens to defoliate the trees they call home. Since these birds roost in Texas during the winter months the threat to trees in negligible. A large population such as this also puts a dent in the fish population to some extent. So little is known about fish populations in the main stem of the Trinity and since consumption of fish by humans is ill advised, the birds seem to have picked a great spot to be left alone.

Cormorant numbers have rebounded in the last 40 years. At one time the widespread use of DDT decimated their numbers due to weakened shells caused by the chemical. The rapid rebound of the species seems to be near exponential in the past ten years. Another large roosting group of cormorants overwinter on the northwest corner of White Rock Lake near the intersection of West Lawther and Mockingbird. Having seen both roost sites, the White Rock Lake site is very quiet compared to the loud and noisy Wetland Cell location.

Many of the other resident species found down here year round seem to keep their distance from the cormorants. The egrets that are usually found in Cell G have moved into Cell F further up the chain.

Cell F cascades into Cell G via a short dam, sluice and aqueduct that can be seen from the Fellows Lane entrance. Upstream one can walk/hike/bike as far as the I-45 bridge. The wetland cell here is known as Cell E and has a resident beaver population.

The Corps of Engineers has also built Wood Duck boxes along the Wetland Cells in various locations. Last year there was a breeding pair at Lemmon Lake and in Wetland Cell F. The birds at right were flying over that same Cell F area this fall.

I’m not much of a bird person so I’m sure that I have missed the dozen or more species of smaller birds that flyby and live in the brush. The larger ones catch my eye and this time of year a large number of hawks, eagles and vultures of all shapes move through following their food. Kestrels seem to be in abundance here where they pick over the short cut grass over the wetlands. The same can be said of the Kingfishers who make easy work of baitfish in the cells.

The Ongoing Affair With Poaching 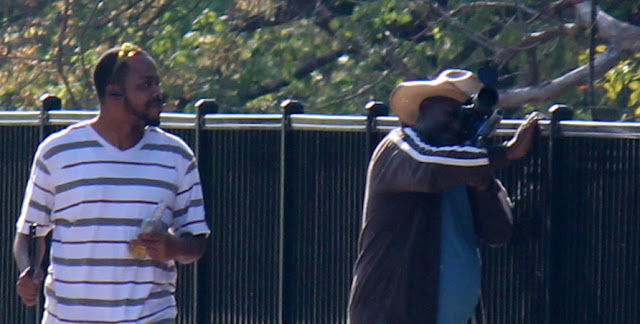 One of these days, someone is going to get hurt down in the Great Trinity Forest by irresponsible individuals firing their weapons at anything that moves. These two were on a leisurely stroll on Saturday October 20th on the Great Trinity Forest paved path in Joppa Preserve. Shooting at ducks in Little Lemmon Lake from the powerline right of way, then shooting at birds perched on the powerlines and powerline towers that bisect the preserve between Little Lemmon Lake and Lemmon Lake. 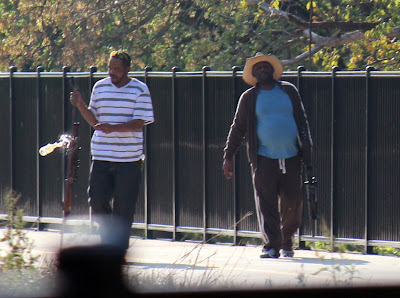 This trail cost millions and millions of dollars to build. It sits unused to a degree because of the stigma attached to the neighborhoods that surround it, crime, unsavory people etc. Most of the negative news is overblown to a degree. The stink sticks though.

The trail is built to the same standard as the Katy Trail and White Rock Lake trails enjoyed by so many. Imagine seeing two men with guns shooting and drinking at the lake or in uptown. Imagine the trouble they would be in. The city ordinances and state laws broken would have them in jail all weekend. Not so down here.

The Dallas Police Department merely told these guys that they might not want to shoot down here anymore because someone complained. The police were kind enough to call me back after I got the hell out of there awaiting a response from calling 911. I could not believe they let them go. I could not believe there is not a zero tolerance policy for rifles of any kind, firing of any kind, hunting/killing of any kind in a city park. The laws are on the books but not enforced.

I have no problem with hunting, shooting, guns. Feel free to buy and shoot as much as you want. Not inside the city limits, not in a city park, not in a nature preserve, not when you are drinking beer and especially not shooting over someone’s head that you can plainly see through your scope. It’s not a joke, it’s not funny. I have been trying the last ten days to see if I’m missing something here. If there is some loophole in the city code that allows for this kind of Walker Texas Ranger hobby down here.

The problem is epidemic, it’s not isolated. Even the next day, a Sunday, after the Cowboy game on October 21st another individual was down there shooting and drinking beer. I wonder how and why this all happened.

The Audubon Society has volunteered hundreds of hours down here to count birds, right in the very spot where these individuals were shooting. Counted in the morning, shot in the afternoon. The city will need to decide what they want this place to look like in five years. Do you want families using the trail or beer drinking man children on a faux hunting safari? It’s an easy fix. Lock them up.

Ghost Of An Old Swamp In The Great Trinity Forest

Trinity River Trail Between The Levees Becomes A Reality