What has been a sleepy old ranch road for over a century in South Dallas is now being transformed into Phase II of the Trinity Trail. Featuring a new bridge over the Trinity, the trail will serve as a backbone to connect north and south, east and west.

The trail and bridge will allow access from Oak Cliff into Pleasant Grove or Rochester Park to Hutchins. Strange marriages of communities that have always been separated by the river, freeways or geography even though they sit rather close to one another.

Construction of Phase I of the Trinity Trail began in 2008 and was finished in 2010. Phase I starts at the Loop 12 Boat Ramp Parking Lot and terminates at Simpson Stuart Road. You can read more about it in a previous post in the blog here:

The photo above shows the newly completed section north of the bridge. The construction here seems fairly straightforward as the path moves away from the river and onto higher ground.

I believe the original plans included an interpretive site of some kind close to where I took the photo above. In the woods to the immediate left are the remains of an old Caddo Indian settlement. The woods in this area are bisected by Woodland Springs the mouth of which is only a couple hundred yards south of the bridge. I have been told that some skeletal remains have been found in this area as recently as 2002-3. Pottery shards, flint tools, beads and shells have also been found in the same area along Woodland Springs.

This particular spot also serves as a great jumping off point for exploring the river to the south. From here a crude trail exists for about a hundred yards, eventually reaching a concrete spillway of sorts for Woodland Springs. This is the best spot for crossing the stream bed as you will not get muddy. Crossing the concrete spillway you enter the McCommas Bluff Preserve. A better trail exists here that will take you down to the actual bluffs. Beyond the bluffs there is yet another trail/dirt road that connects McCommas Bluff Preserve with Gateway Park. Gateway Park is located at Dowdy Ferry Road and I-20 and will serve as the future anchor on the south end of the park system.

Below is a map, with green dots highlighting current and future trail head access points. Click the pic for a larger version

When complete it will be possible to travel from Bachman Lake(Harry Hines @ Shorecrest where the levee starts) down to Dowdy Ferry @ I-20. The route is exactly 25 miles one-way. It utilizes as much dirt road and trail as possible while minimizing street travel. Travel via street is needed to get around the Wastewater Treatment Plant on Sargent Road. No way around it. Even with the detour, one is only exposed to a couple miles of pavement on low traffic residential streets through Cadillac Heights. The route also makes use of a forgotten John Phelps Trail in the Bonnie View Area and a nice/clean John Phelps Recreation Center on Tips Blvd.

Below is the GPS data for the route:

I’m not aware of any other large metro areas in the United States where one can ride a bike 50 miles round trip on mostly unpaved surfaces. Sure will not be everyone’s cup of tea as the distance is somewhat far. But it’s a reality. People often complain about the lack of access or public land to do things in Texas. Here we have plenty of it in the middle of town. Irving to Hutchins, one end to the other.

Construction for Phase II is scheduled for completion in the Winter of 2012. As of August 2011, much of Phase II is still not usable and is an active construction site you should stay away from. The route in the link above should not be used until construction of Phase II is finished. Mile 20(Simpson Stuart Road @ Joppa Preserve) through Mile 22( bridge near Audubon Center) are under heavy construction with open pit excavation and heavy machinery.

Where the north bank of Phase II seems to be going smoothly, the south bank is seeing a major rework of the river bank. The City of Dallas has a 72″ water main that runs through this area and a project is underway to reinforce the riverbank to protect the water main from erosion.

As you can see, heavy construction is underway on about 1/4 mile of the south riverbank. A cofferdam holds back the river for construction of piers to support a future rock wall. 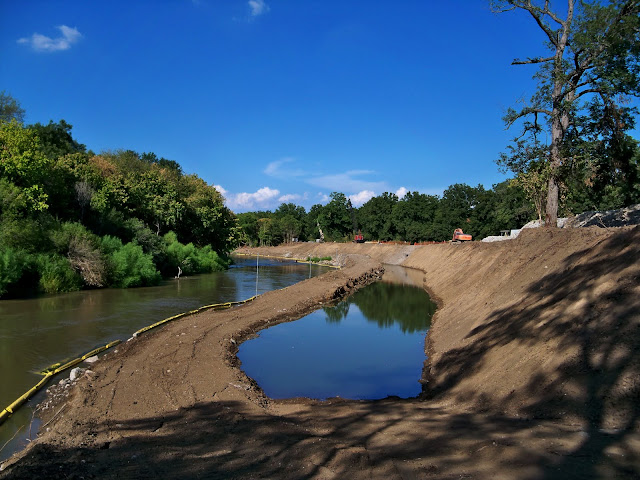 I imagine construction of the bike path will not begin until this large project is complete. This seems to be a rather large undertaking and seems to be even larger in size than the Pavaho Pump Station project further upstream.

The back story on this area is unique. The State of Texas originally purchased this property along with the land where the McCommas Bluff Landfill now sits. The purpose was to build a turning basin for river barges for the never built Trinity River Navigation Project. That project, much like the current toll road idea never really got off the ground. The plan for the particular land seen above was for a State Park. It was actually put into the inventory of  Texas Parks and Wildlife, given the name of Trinity River State Park. Under the large canopy of native pecans that cover the land here plans were drawn up for a lake, campsites, RV area, hiking trails. On some appraisal district maps it still shows as Trinity River State Park. Cutoff by the landfill, this pocket of nice parkland sits unused. In 1983 the Texas state legislature approved a measure designating a 200 foot wide section of land on either side of the Trinity River for the first 11.7 miles downstream of the levees as a state park. There were some funding issues that kept this from becoming a reality. Sounds familiar!

Double Special Reminder: Phase II is still not open and is a potentially dangerous and active construction area.

Death of a Texas Lake