Around once a year the Moon is a whisker closer to Earth than the the other lunar cycles, setting up for what some advertise as a bigger and brighter Moon. Coinciding in 2013 within a day of the Summer Solstice this astronomical event is interesting to see especially when one can find a suitable backdrop to frame a photo. In Dallas we lack a mountainscape, ocean or even much of a hill that gives enough perspective to capture a full moon. We do have a bridge and some tall buildings to work with that make for a fine backdrop for a moonrise.

The term Supermoon is not used within the astronomical community, which uses the term perigee-syzygy or perigee moon. Perigee is the point at which the Moon is closest in its orbit to the Earth, and syzygy is a full or new moon, when the Earth, the Moon and the Sun are aligned. Hence, a supermoon can be regarded as a combination of the two, although they do not perfectly coincide each time. On average, about once a year (14 months) the moon becomes full within a few hours of perigee. 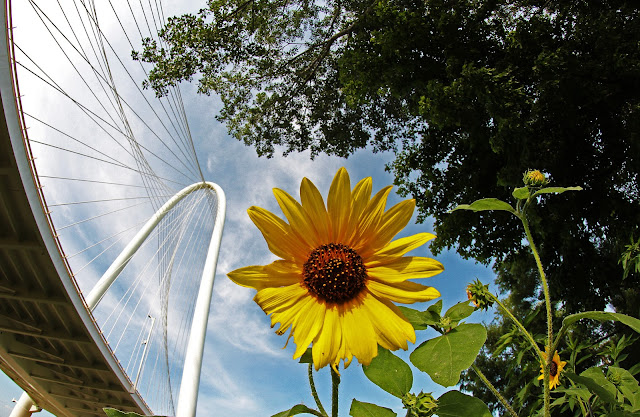 Waiting for the sun to set within a day of the Summer Solstice is often like watching grass grow or waiting for paint to dry. Gives someone a chance to explore the Trinity River bottoms between the levees and see some of the sights and do some unconventional things that few check out. Killing a few birds with the same stone. 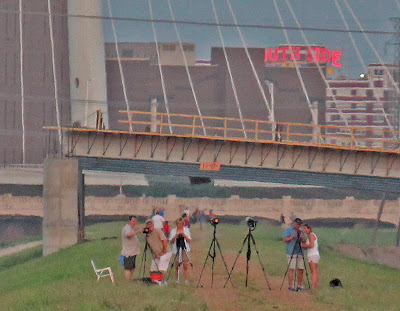 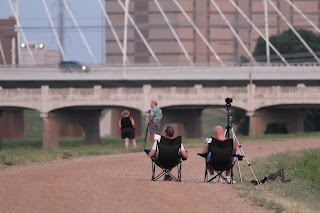 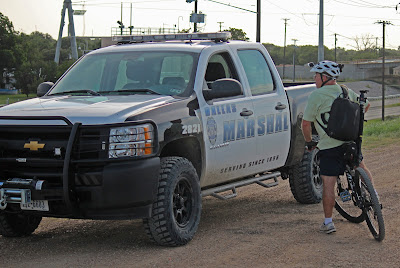 Surprising to see more and more people out at these things. Just a couple years ago I’m certain that I was the only one out there on the levee photographing the moon. On this particular night there were about one hundred. Some here on their own, some in pairs, some in groups.

The Dallas Marshal’s Office has upgraded their vehicles to patrol the Trinity River. Seen at left is one of the new Chevy Silverado 4×4’s equipped with heavy duty mud tractor style tires. This deputy marshal was up on the levee near the new Pavaho Pump Station watching for illegal motorized vehicles on the levees. Inset above is David Mimlitch who is best known for his award winning aerial photography of the DFW area and Trinity River. This evening his camera gear was on two wheels instead of two wings.

As the sun slowly descends out of the way and the skies begin to darken, the real reason most people are here on the river can begin…..

The Rise Of The Super Moon 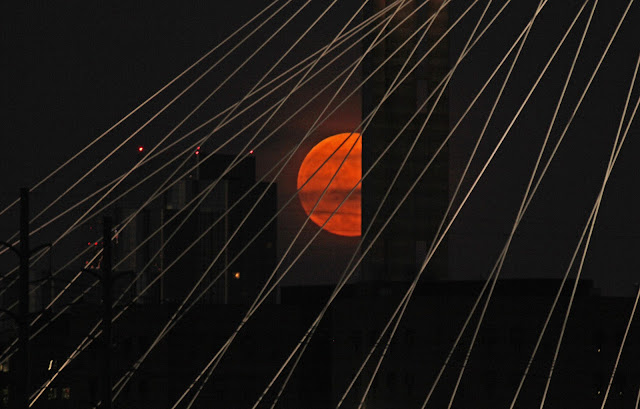 You really don’t need the Moon to be in a “super” phase to photograph the full phase down here. Advertised as 12% closer and 30% brighter the moon looks the same to me year round. The best time of year to photograph the moon in Dallas is actually in the winter when the atmosphere is clearer, the sun sets earlier and the chance for clouds out to the east is lower. Many people, in any event, use the annual Supermoon event as an occasion to dwell on Earth’s only natural satellite and chose the levees as their location.

In the summer months I have found that storms and cloud cover in East Texas some 100 to 150 miles away can often impact the sighting of the Moon as it first rises above the horizon. If the Tyler, Kilgore or even Texarkana area is experiencing early evening storms then one must wait thirty minutes or more after moonrise to see the Moon as it clears the distant high clouds. 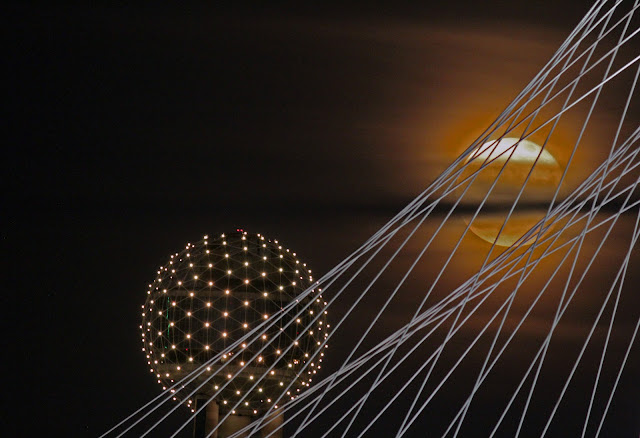 The light bouncing off the Moon through all that thick East Texas humidity creates an orange glow at first then into a mustard yellow as it passes by Reunion Tower.  It’s usually around this time that many people photographing the Moon will migrate towards a better spot for their liking. The Moon moves at a fast pace diagonally from lower left to upper right. The pace of which allows for a shot or two at most before requiring a move of a few steps if one wishes to re-rack the same shot. Below is a real time clip taken in June 2013 of the Moon as it travels from left to right across the night sky moving directly behind the Margaret Hunt Hill Bridge

Gotta move fast to get the shot you want and need to be able to pick up and move with your gear when the time is right.

The sweet spot for photographing the Moon down here is about 1/4 mile downstream of the Sylvan Avenue Bridge on the west levee. If you push further out towards the Hampton/Inwood Bridge the moon perspective will be much larger but the powerlines along Sylvan will be in the way. Pushing even further out toward Singleton/Eagle Ford area has been tried too with mixed results. If any clouds are low on the horizon to any extent then the trip is also a bust.

We live with the Moon and see a Full Moon every 28 days. Few realize the speed that it travels across the night sky until they watch it move across the night sky. Great vantage points and worth attempting sometime if you have a camera that can be manually set. The bright white lights of the bridge make for a challenging shoot, there are tradeoffs with getting details of the Moon or details of the bridge. 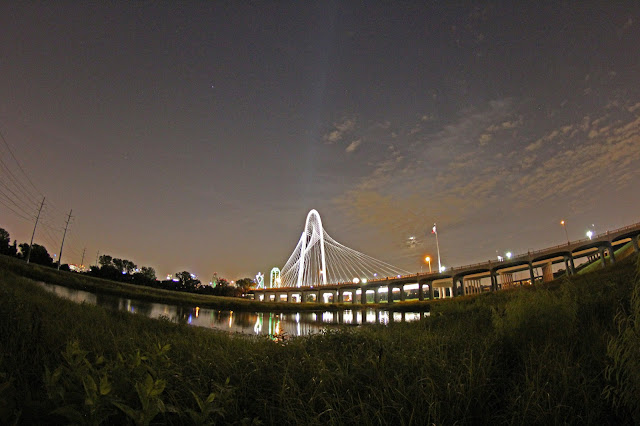 The late Spring rains in 2013 have kept the small ponds that dot the floodway full of water. They serve as a great reflective backdrop when the winds are absent. In wet periods when the river floods between the levees the ponds here will fill with small fry, baitfish and crawdads that serve as a food base for wading birds. The Trinity did not see large scale flooding rains this winter and as a result the small patchwork of ponds down here lack any real forage for birds.

A mountain bike really is the best form of transportation if you want to explore the levees between the Caltrava Bridge and the Santa Fe Trestle Trail. A bike makes quick and easy work out of the gravel access roads here and one can travel from one site to another in just minutes.

The City of Dallas calls this a 16 foot wide access road. Looks more like a bike path don’t you think. The final section seen above was paved about two weeks ago and now connects the Santa Fe Trestle Trail with this new section that stretches almost to I-35. I have heard it called the Trinity River Connector, Trinity River Trail. It still does not connect with anything nor does it serve as a functional piece of infrastructure. It’s just sort of there.

Mountain bikes had no trouble negotiating the soft surface road that was here before. The concrete smooths things out a little. This particular section from Corinth to I-35 was paved in about a week, the whole thing. The contractor had a machine that just laid out a smooth ribbon of concrete the whole distance. Wish they would have kept on going as many of the trail users come from the Continental Avenue and West Dallas area to recreate down here. Recent news is that the trail is stalled for planned construction of new highway interchanges. I bet it has something to do with……..

That Big Gigantic Hole Near the I-35 Bridge 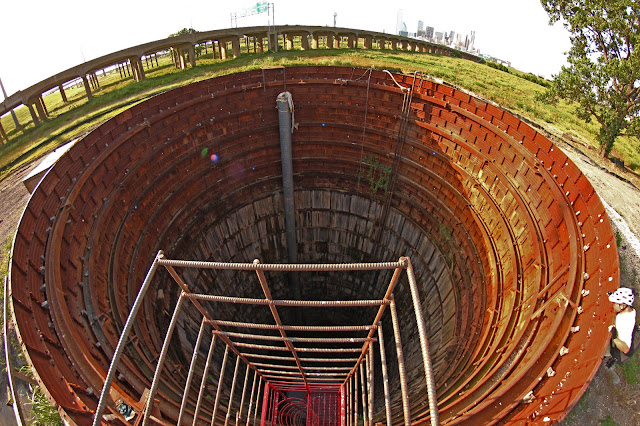 I bet a million people pass within rock throwing distance of this ten story deep hole everyday and don’t even know it’s there. It’s big. It’s deep. It’s spooky. Larger than a missile silo and if above ground would rival an office building or two in size Downtown. This hole is part of a Dallas public works project to tunnel underneath the Trinity River. The project is supposed to link the east and west banks of the Trinity River water system, carrying via gravity waste water from the Downtown side of the river to the Central Wastewater Treatment Plant. A twin bored hole of similar size sits next to the Cadiz Pump Station not far from Old City Park. Construction of this project began in early 2012 I believe. In the past year the site for whatever reason has sat empty. The fencing, signs and equipment all disappeared with the passage of time. So, we’re left with this big hole. 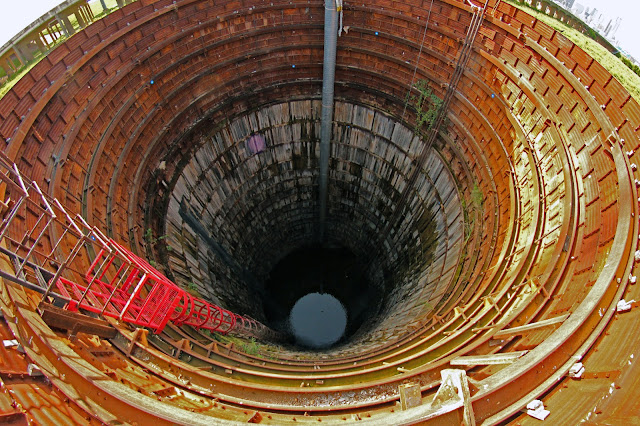 There is a bit of a lip to the top of it, 4 feet or so. No danger of falling in. It’s also not high enough to keep floodwaters at bay. In the spring of 2012 the Trinity inundated the site.

The Cadiz Pump Station sits in the shadow of Downtown Dallas and spitting distance from I-30. I believe when the new I-30 freeway project begins construction, the century old pump station will be demolished for the “Horseshoe Project”.

The old Cadiz Pump Station once sat on the banks of the Trinity River. Prior to channelization and realignment some half mile away, the natural river channel near Downtown was a picturesque limestome cliff lined river with large groves of mature trees. Remnants of that old Austin Chalk lined channel can still be seen like the one above. The Sportatorium wrastlin’ arena once sat in the abandoned lot above. Without much imagination you can picture what the river once looked like through here.

Speaking of the river being re-channeled………………

Walking On Water At The Standing Wave

At the far end of the levees stands the Santa Fe Trestle Trail and the Trinity River Whitewater Park. The century old Santa Fe Trestle has been converted into a pedestrian/bike bridge that spans the Trinity right at the very end of the southernmost portion of the levees. Just upstream a mere 50 feet or so sits a purpose built DART Light Rail bridge that services the Red and Blue lines to the Corinth Station from Downtown.

Below the bridge sits the Standing Wave, the Trinity River Whitewater Park.

The Standing Wave feature serves as a sort of endless surfable whitewater wave. If you have the right equipment you can get into the wave and surf it, do tricks, spins and such. There are two water features here, the Upper and Lower Wave. A concrete divider on river left(north bank) separates the surfing waves from a “canoe bypass” that is more like a flume.

When the water is low in the summer during dry periods I have noticed that some of the larger wading birds have been able to hold their own at the top lip of the lower standing wave feature while they are fishing for a meal. Maybe it was the Full Moon pulling on my brain that made me decide to try it myself.

Footing is firm under what is an algae mat of sorts that blankets the Lower Wave. I was able to walk out there without issue and into the middle of the main channel and wander around for a few minutes. A slip would not have been a good thing as I would have been laundered through the Lower Wave which is rated Class II-III whitewater. Some video standing out on the Trinity River in mid-channel:

It’s a great view from here. Looking straight up the channelized Trinity River one can see right under the Corinth Street Viaduct channel and much further beyond. A real unorthodox way of seeing the Trinity River. In the very near future, the Corps of Engineers plans to dismantle the wooden sections of bridge here on either side of the river. If you want to see the old woodwork here you should make plans for a trip here soon.

The Rare Hexalectris Orchids of the Great Trinity Forest