In the early part of the last century George Dorsey(1868–1931) from the Carnegie Institution in Washington DC recorded a collection of Caddo mythology stories. At that time the Caddo had long since been moved to Oklahoma from their traditional lands in East Texas. Dorsey realized way back then that the stories and traditions of those native tongues would likely vanish. Among the vast collection are stories named “Evening Star and Orphan Star,””The Boy Who Married a Mountain Lion,” “Coyote and the Six Brothers,” “Lightning and the People,” “How the Buffalo Ceased to Eat Human Beings,” and “Why Hawks Have Thin Legs.” 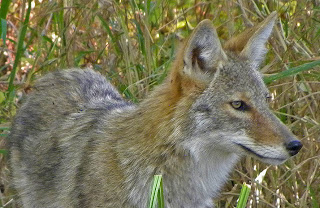 Most of those stories have no bearing to modern Texans. They might glimpse the tail of a retreating coyote or maybe the distant call of a hawk. Frankly few places still exist where one can see animals of such mystique behave as the First Texans once did. Those Caddo stories are not about people. They are about the animals themselves.

The coyotes own this land. They run, manage and decide who stays, who goes. I imagine I must meet their muster as I often find myself within a distance so close to them that my camera will not focus for being under the designed minimums of the lens.

Our city forefathers spent the better part of the last century killing out a good part of the natural world they knew down here. A process of rearranging nature to suit the hand of man. Fair enough. I imagine those old Indian tribes if given a bulldozer and a chainsaw would most likely do the same.

Those old animal stories though, well, they still ring true today. Given enough time and enough human neglect the Trinity River has reclaimed much of what was wrecked and ruined in the last century. A post World War Two generation of man skipped over this place and let it go back wild.

Few things on two legs and without feathers get down here. Some special places where the human is the unexpected outsider and where animals often challenge a man to find somewhere else to spend a Saturday afternoon.

It all comes full circle back to those old Indian tales. That vague feeling of being on equal footing with what many would consider small varmits living on the margins.

The Caddo language calls them ta shah. The coyote. The coyote is also represented in many morality tales as an example of a trickster and liar. The stories that make up the Caddo mythology attempt to answer questions about the world, teach lessons and simply to entertain. Some of the more popular stories that explain the world are about how death came into the world, the creation of a sacred spring and the flooding of the earth. Moral lessons are taught using the stories of the twin heroes named Thunder and Lightning.

The voice of those ancient stories still ring true today. In the Great Trinity Forest, in the heart of a city, where one can find the terror and wonder of a coyote pack sniffing and walking over your own footprints laid minutes before. I thought their eyes might be larger than their mouths. Their quiet thousand yard stares were more geared toward quarry one hundred yards distant.

The browsing habits of a Whitetail buck is what held their attention. Mine too. A rare sight for Dallas, the deer population is making a very slow recovery and a move up into East Dallas by way of wildlife corridors on White Rock Creek. Detrimental poaching activities which the city could easily address go largely unchecked down here. Hunting deer using hog dogs and cruel snare methods are a poor way to hunt and should be openly ridiculed by those at city hall.

It’s hoped that whatever plans and designs are on tap for the second Trinity River golf course planned for this area in the last 50 years that accommodation will be made for the wildlife that already call it home. 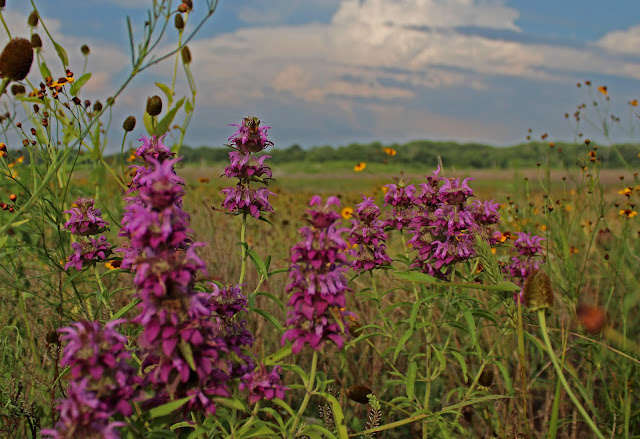 This time of year the rich groundcover serves not just a unique foreground for a rising anvil headed thunderstorm some miles distant but also serves an an incubator of sorts for amphibians and crustaceans. The moderate late spring rains send water into these low areas allowing tadpoles and small crawfish an area to mature. 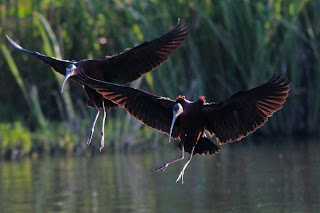 The tropical birds know all to well what feast awaits them in the shallows here. Those same birds that move up from the far flung places we Texans know as resort destinations, the Yucatan, Belize, the rain forests of the Amazon. Here in Dallas they feel right at home. What small Dallas county remanent left of a once immense bottom land that once reached clear to the Gulf of Mexico. Few such places exist these days. With the rarity of this type of land comes the loss in population of such birds. The White Faced Ibis is so few in number here in Texas now that the over-summering population here in the Great Trinity Forest most likely represents a notable percentage of the entire population. Bird minded folks always seem to flood me with email when I see the White Faced Ibis down here, especially when they have juveniles in tow.

I imagine an Ibis would not have much of a taste to it or much nutritional value. The coyotes might have flushed the birds just for the sake of flushing. Just out of view and behind a small batch of willows the four coyotes converged on that flock. Hoping for what, I do not know. The tricksters.

Many of the birds this time of year are in full breeding plumage. The neon colors of their feathers and beaks really show in strong daylight. Birds that many see as plain vanilla this time of year have colors bolder than any running shoe.

All the birds featured here all feed directly from the Trinity River in the flats, flooded marshes and swamps that pepper the landscape of central Dallas in late spring.

This past winter did not bring the large flooding rains needed to send bait fish and fry into many of the old swamps and oxbows where these birds feed. Sort of slim pickings this year in places that are traditionally the Golden Corral buffets of fish for wading birds.

Unknown what impact this will have on the traditional migration of Wood Storks and Spoonbills to the DFW area.

Many of the wading birds in Texas are specialized in some hunting method that sets them apart from the rest. While flood water might not have moved in baitfish for consumption, the jack of all trades White Ibis and Snowy Egrets seem to have a niche in the flooded cover down here. Found up and down the Trinity River they can often be spotted close to Downtown if you peer over the bridges. About the size of a chicken the round birds are impressive to watch as they feed in organized groups.

Moving further down the river is where they really shine. This time of year when some of the areas hold small frogs and crayfish the birds attack with zeal. A hard rough cuss of a place to visit. Hard to get down there, hard to get through the woods, hard to move through all the detrius of the swamp and work up the nerve to stand in it, knee deep.

In the video above filmed entirely in Dallas, watch how the White Ibis and Snowy Egrets work in a coordinated flock eating frogs and small crayfish as they go. 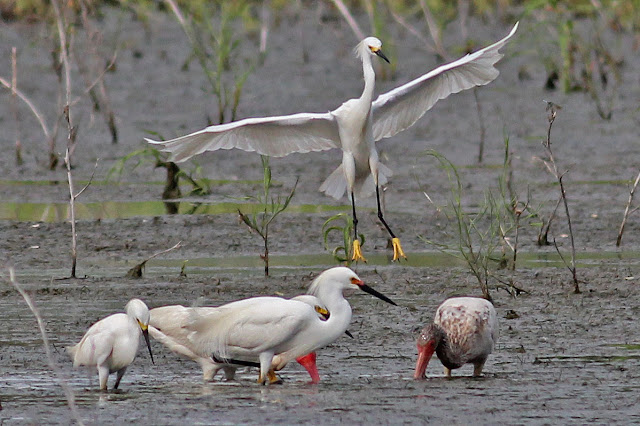 Under the gathering clouds and electrifying claps of thunder a nearby storm does not even register with these birds. The ibis seem to serve as the bartender of the swamp, stirring up the bottom of a mix that brings prey to the surface. The egrets need to only follow the leader. 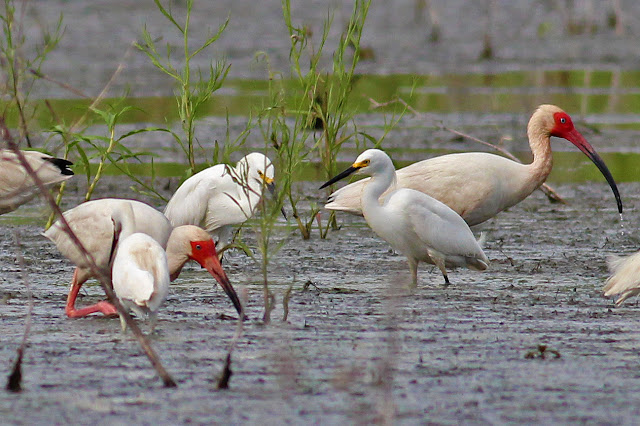 On their own, the egrets shake their feet methodically under the water hoping to stir food to the surface. Neither species of bird grips prey to any extent with their feet, all food is caught with their beak. 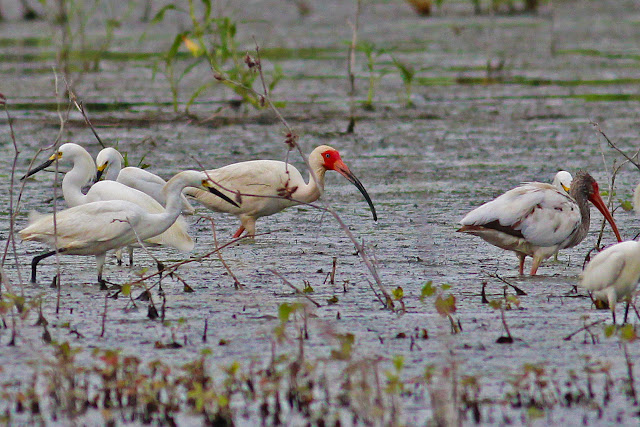 The off colored Ibis above is a juvenile White Ibis and has mastered the art of foraging for it’s own food. 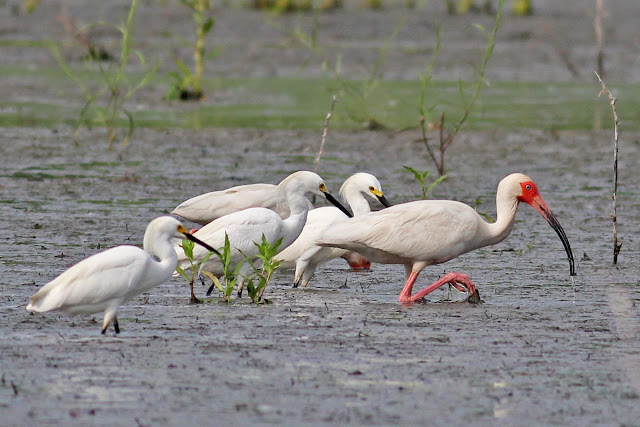 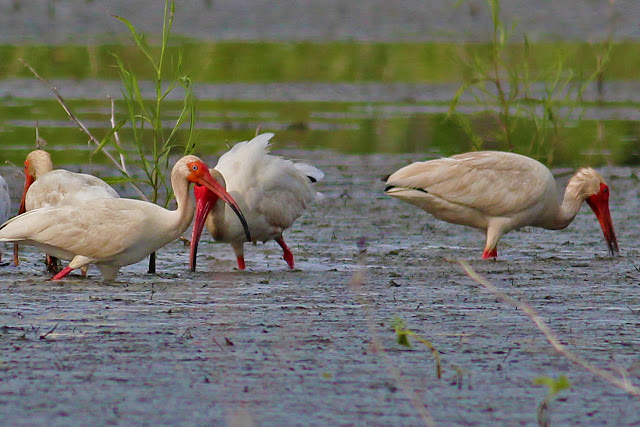 Many wonder if these sites will soon be a thing of the past. Killed off once by an ever expanding city and then left to regenerate without any help from man, this area now faces the very real possibility of being bulldozed for a new purpose. The bells still toll for one and all  — and God knows for the land.