There was an old man from the Freedman’s town of Joppa named Bad Leg Fred who once ran a private fishing concession here in the 70s and 80s. For a buck or two, he’d let you drown worms for an afternoon in the pond the locals called Bad Leg Fred Lake. Stocked with bass, crappie, perch, catfish and carp the place was popular with locals who wanted a cheap place to fish.

Old Fred has most likely passed away. Unfortunately so has his lake and the fish in it. 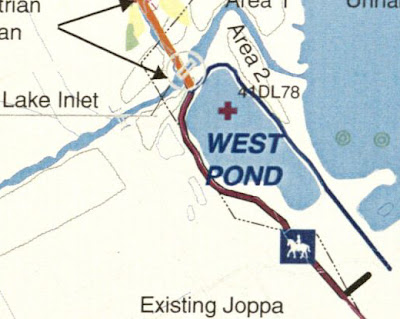 That old pond sits inside River Oaks Park, part of Joppa Preserve and one of the trailheads for the Trinity River concrete trail at 4800 River Oaks Road.

The Corps of Engineers calls the place West Pond. North of River Oaks Road and about 5 acres in size this body of water is most likely an old gravel pit excavated for dam construction and improvement of Lemmon Lake which sits due east. An archeological site was identified there in the 1940s and is noted on the inset map as 41DL78. The pond was most likely used in the 50s and 60s to draw water for cement manufacturing.

The pond has no true inlet or outlet. When the Trinity Forest Trail was constructed in 2008-2009 the design did not take into account the complex storm water runoff that feeds West Pond and Lemmon Lake. The resulting construction cutoff the water to both lakes. The small channelized creek that once fed the lakes now bypasses them heading due east for the Trinity River.

West Pond is most likely recharged via a shallow water table. It sits just high enough and far enough from the Trinity River that only the largest floods reach it. As a result the sport fish, the bass, perch and catfish that have been stocked here over the years all stay put. Makes for a great fishing lake that is free from many of the undesirable rough fish that fill other lakes.

I wonder what went wrong here. The pond here has never seen a fish kill according to the fishermen who have angled here back to the Bad Leg Fred era. In 2011 when Dallas saw a record drought the pond held full all summer. This spring the periodic rains every few days have turned the woods around the Trinity River green and lush, the kind of rain that allows aquatic life to flourish.

Clues to what might have caused the fish kill probably lie in the off-color of the water. The once green-blue water is now clear, stained a shade of light brown. It was a mass extinction event that killed all the fish, top to bottom, big to small. Surprised to see the larger carp die off. In the heat of the summers here, the carp are the very last fish species to die in the shallow water of drying lake beds. They can live in what amounts to a muddy pudding. To die in a large pond is a question that needs an answer.

Anatomy of a fish kill
It must have been from an extreme lack of oxygen in the water that killed off all the fish. One could only guess if it was natural or man made.  One of the most common types of fish kills in ponds is caused by depletion of dissolved oxygen in the water. Oxygen must be present in the water at or above certain minimum concentrations for fish to survive. The symptoms of an oxygen depletion fish kill are as follows–the fish will be swimming near the surface, attempting to gulp air; large fish will be killed first, followed by smaller fish; the kill will occur at night or in the early morning hours; the majority of fish will be killed within a few hours time.

Oxygen depletion fish kills are most commonly caused by a die-off of the microscopic green plants (phytoplankton) in the pond, or overturns in which oxygen deficient water from the deeper levels of the pond mixes with water in the upper levels. Phytoplankton imparts a green color to the water in a healthy pond. It is essential as part of the food chain and as a supplier of oxygen. A sudden die-off of these plants may occur when the plants use more oxygen than they supply to the pond. As the phytoplankton die and decompose, the remaining oxygen in the pond is consumed and within a short time, a fish kill occurs due to oxygen depletion.

I’m not sure what caused the die off to be honest. The absence of turtles, frogs and birds might suggest something man made. A nearby railroad line and a tractor trailer lot sit just to the west.

One of the only public fishing spots accessible to South Dallas residents, the pond here has been a haven for anglers without the means of transportation to other larger bodies of water. Some take DART. Some hitchhike. Some walk. Some walk miles to get here. I feel for those folks. Their refuge from the day to day grind has evaporated for the summer.

Little Lemmon Lake went dry last summer and has only refilled due to spring rains. The customary winter rains that usually send the Trinity out of her banks did not flood the Great Trinity Forest, leaving Little Lemmon Lake without any fish. It’s as barren as West Pond.

A historic grove of oaks sit adjacent to the pond. Since emancipation the oaks have served as a traditional gathering spot for Juneteenth events and many family reunions. A damn shame that the focal point of the park, the pond, is now devoid of fish.

How the lake gets restocked and whatever caused the problem in the first place will be something not likely to be fixed soon. Even 311 calls to get the downed powerlines that have been knocked out for over a month have not yielded results.

The Largest Wildflower Meadow in Dallas