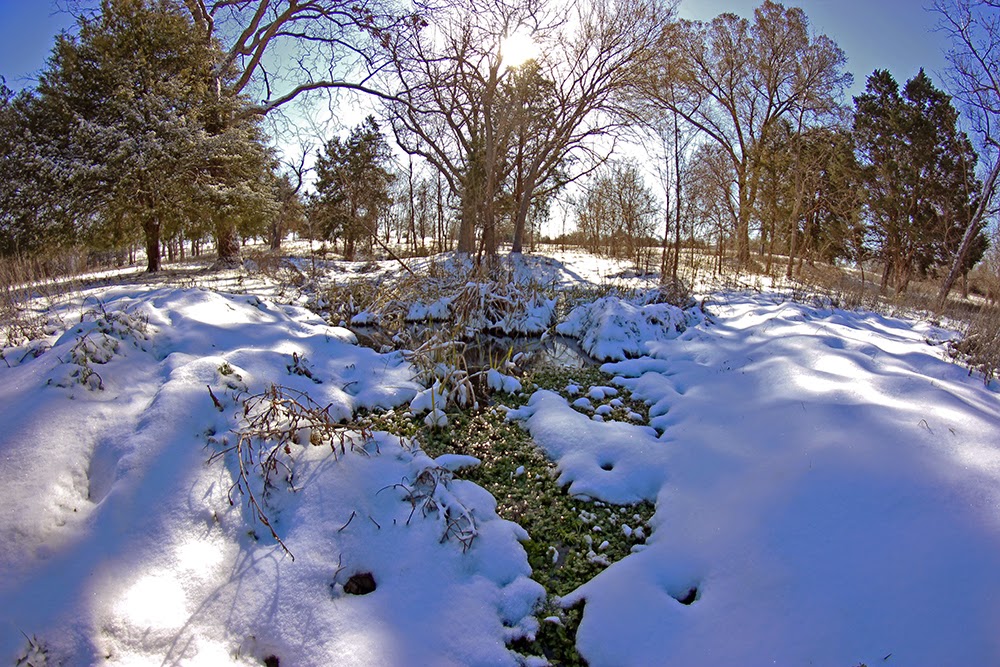 With a silence only punctuated by the distant howl of coyotes the sights of Big Spring under a record breaking snowfall are a sight to behold. Over four inches of snow blanketed the ground the night before leaving a white monotone landscape across the soon to be wildflower filled fields.

As a measuring stick on how deep the snow can stack one can look at some of the only man made fixtures at Big Spring like the campfire and campsite used for decades by the Pemberton family and invited guests. This might be the oldest continuously used campsite in Dallas County. The archeologists tell us that a portion of the Big Spring Native American site is still intact in this area. The immediate vicinity later used by traveling explorers, pioneer families, family reunions and countless scout troops.

Southern Methodist University Professor Emeritus Darwin Payne recently wrote a great piece about Big Spring which was published in the Dallas Morning News. It is a great read about the human history of this place, the Beemans, Bryans, Pembertons and the Pemberton’s Bryan Springs Dairy
http://www.dallasnews.com/opinion/latest-columns/20150113-darwin-payne-dallas-big-spring-has-a-rich-and-important-history.ece 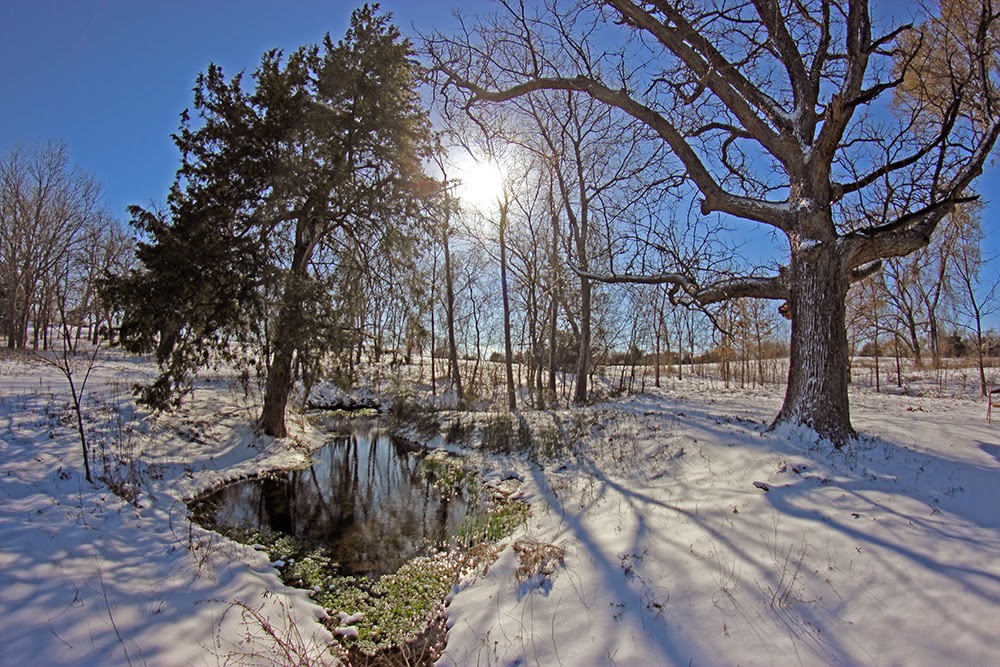 The day before over an inch of rain fell across the Great Trinity Forest adding to an impressive precipitation total. A large rain event coupled with snow is a chance to do a unique monthly water monitoring test at Big Spring. Testing is traditionally in the first week of the month for this site. The results were quite interesting in that the flow rate from Big Spring was much higher than dry conditions.

It is thought that Big Spring’s water source is a mix of ancient water from a yet to be researched deep aquifer, a shallow perched aquifer and runoff from storm events. The flow of the spring averages 20-22 gallons per minute during dry conditions. On this day, March 5th, the flow was cranking at 27 gallons per minute. One could float the theory that snowmelt around the spring was a contributor and the saturated porous soils upslope of the spring.

Richard Grayson who leads volunteer water monitoring for the Texas Stream Team in DFW tested the water after the previous snow event on February 25, 2015. His observations calculated to 28 gallons per minute of flow. On both test dates(2/25 and 3/5), the dissolved solids represented as conductivity of the water was 780 μS/cm. Conductivity is a great test for Big Spring where water usually is in the 800-810 μS/cm range. A higher number suggests the water moves through a large amount of geology before entering the open air.

Dissolved solids are important to aquatic life by keeping cell density balanced. For instance in distilled or deionized water, water will flow into an organism’s cells, causing them to swell. In water with a very high dissolved solid concentration, cells will shrink. These changes can affect an organism’s ability to move in a water column, causing it to float or sink beyond its normal range.  Total dissolved solids can also affect water taste, and often indicates a high alkalinity or hardness.

The water at Big Spring varies little in temperature during the year. A near constant temperature and near constant rate of flow allows a microclimate to exist inside the spring. It was during an early February monthly test that frogs were observed swimming, jumping, diving and interacting in the spring as if it were a bright summer day. Aquatic animals and invertebrates are always seen at the spring even in the harshest of weather. The buffer afforded by the water allows this fauna to thrive.

There are many plants outside the spring where old man winter has a grasp on plants putting them into seasonal slumber. Inside the confines of the spring, the same species dormant elsewhere are alive and thriving such as the sedge in the photo above.

Beyond the immediate outfall of Big Spring, the strength of the spring’s unique envelope of climate begins to change. While the water is slow to change in temperature, the ambient air temperature begins to influence the plants at the spring. Seen above, about 100 feet from the Big Spring source and some 20 feet below the outfall of the pond area, winter takes a grip. This is also the area where Big Spring transitions from the Trinity Terrace to the formal bottomlands of the Great Trinity Forest. Call it the 100 year floodplain or floodway. 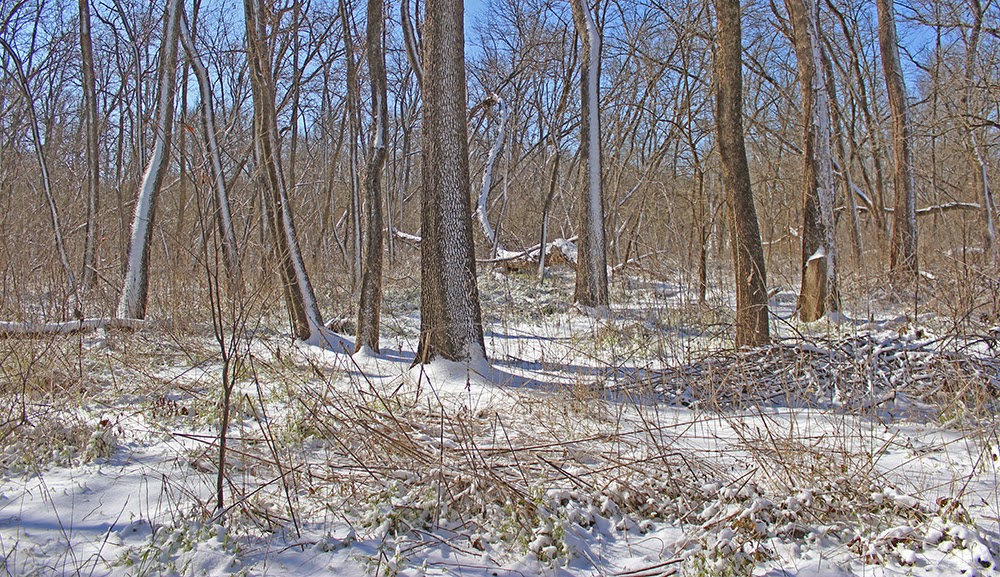 The Great Trinity Forest is dominated by species of flora and fauna residing in a hardwood bottom woodland. Ash, willow, oak and elm are some of the more populated species comprising the woods here. The snow really highlights the trunks as far as one can see. 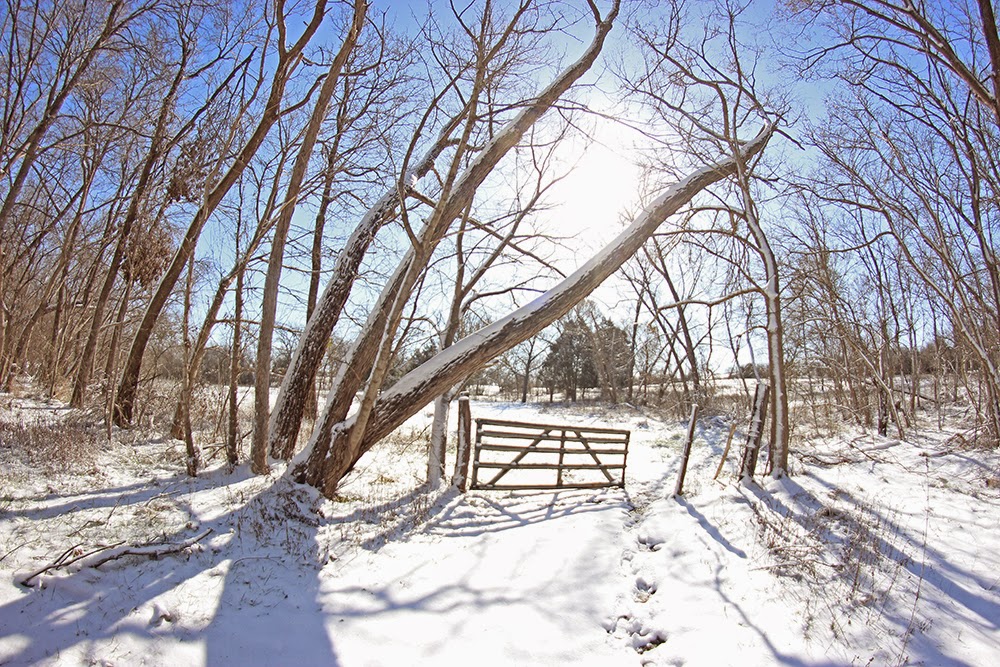 The galvanized gate here, seen above looking east, is often used as a measuring stick to flood events. Bryan’s Slough, called Oak Creek elsewhere, often overbanks and reaches this gate with regular frequency. When White Rock Creek and the larger Trinity River overbank due to flooding the flood waters can inundate the entire gate top to bottom.

On this day the bottoms for half the distance between the gate and Bryan’s Slough (named for John Neely Bryan) it is a blanket of untouched snow. To the west the look changes…. 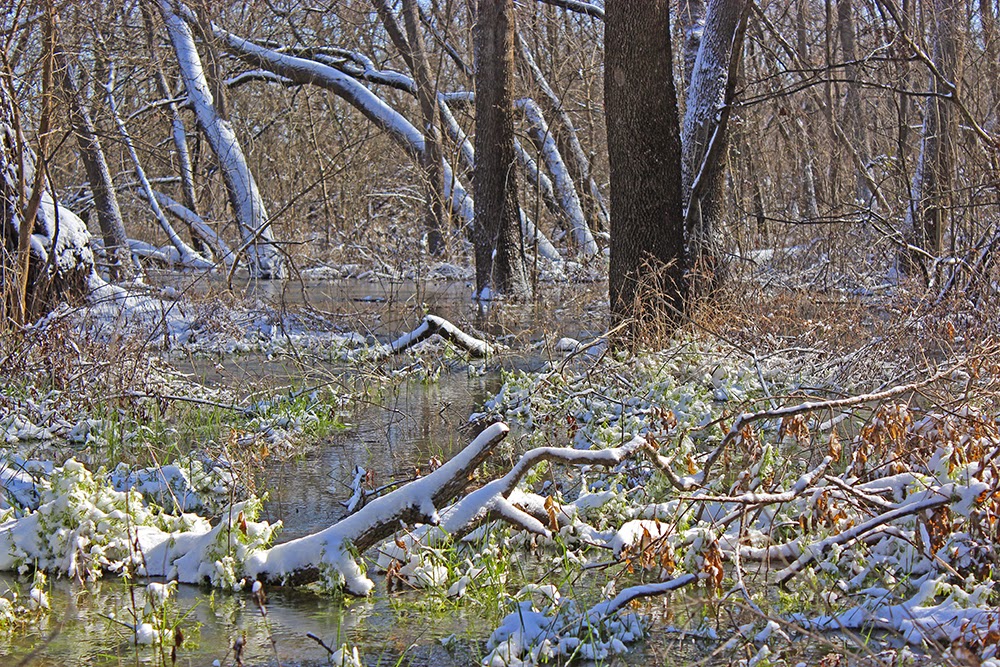 …it becomes a unique flooded vista of ice, trees and fast flowing clear water. The normally shallow slough that is narrow enough for a child to hop across has become a 150 foot wide mighty flow.

Catchweed seen above often fills the bottoms here in winter. The name comes from a velcro like cling this plant’s leaves have which will stick to clothes as one walks by. It also holds a lot of snow as evidenced by the photo above. A member of same plant family as coffee, the fruit of the plant can be harvested and used as a coffee substitute. In the past, people have used the plant when dried to stuff mattresses and pillows. 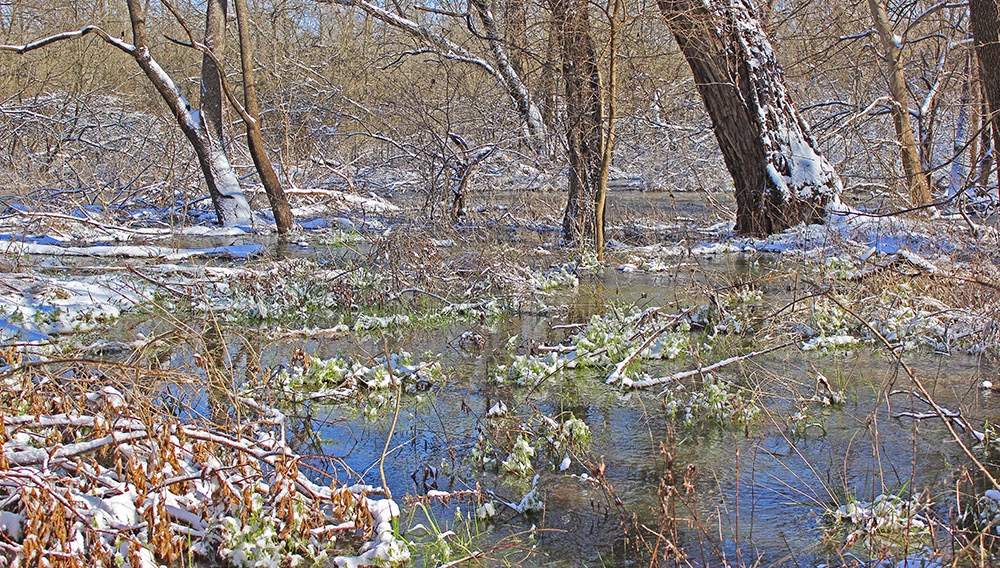 The last several years have been remarkably dry for the Great Trinity Forest. A lack of large flood events from the nearby Trinity River have left many of the wetland areas devoid of seasonal overbanking events. The flooding of such areas serves as a great incubator for wildlife of all kinds and is a building block for the foundation which makes the Great Trinity Forest such a unique place in Texas.

History shows us through flood gauge data and rain events that these areas around the nexus of White Rock Creek and the Trinity spend more time wet and flooded than dry. That’s why there is no footprint of the old timers here from a century ago. They were smart not to try and tame a place with such brute force as frequent flood events. Vast flooded lands even after days with an average rain will put a foot or three of water across the bottoms here for days at a time.

The winter birds that visit Big Spring are an interesting lot that vary from what are seen in the warmer months. Many birds like the Song Sparrow seen above and standing in Big Spring spend the summer nesting months in far away areas of Canada and the Northern United States. They are often heard but often hard to spot as they dart in and out of dense thickets of foliage and branches that they prefer.

Another bird common to Big Spring only in winter months is the White Crowned Sparrow. The White-crowned Sparrow is a distinctive bird with bold black and white stripes on its head. It has a clear, gray breast and belly, long tail, and wings distinctly marked with two white wing-bars.

Very easy to spot at Big Spring but one of the sparrows that many birder’s lack in their life list is that of the Harris’s Sparrow. This big, elegant sparrow is a winter bird of the Southern Plains , nesting in north-central Canada, wintering mainly in the I-35 corridor between Oklahoma City and Waco. Because of its remote habitat and shy behavior in summer, its nesting territory was not discovered until 1931, long after those of most North American birds. Harris’s Sparrow is more easily observed in winter in places like Dallas. Flocks feed on the ground near brushy places, flying up when disturbed to perch in the tops of thickets, giving sharp callnotes. It’s a wonderful bird to watch for in the Great Trinity Forest.

Last but not least is the resident Big Spring Cooper’s Hawk. A far as hawks go it is medium-sized and is a bird of the woodlands. Feeding mostly on birds and small mammals, it hunts by stealth, approaching its prey through dense cover and then pouncing with a rapid, powerful flight. Unlike the larger Red-Tailed Hawk which often uses open ground and big spaces for hunting, the Cooper’s Hawk utilizes the cover of thickets and wooded spaces to ambush prey. The dead give away on the Cooper’s is the blazing red eyes that some exhibit and the rounded tail.