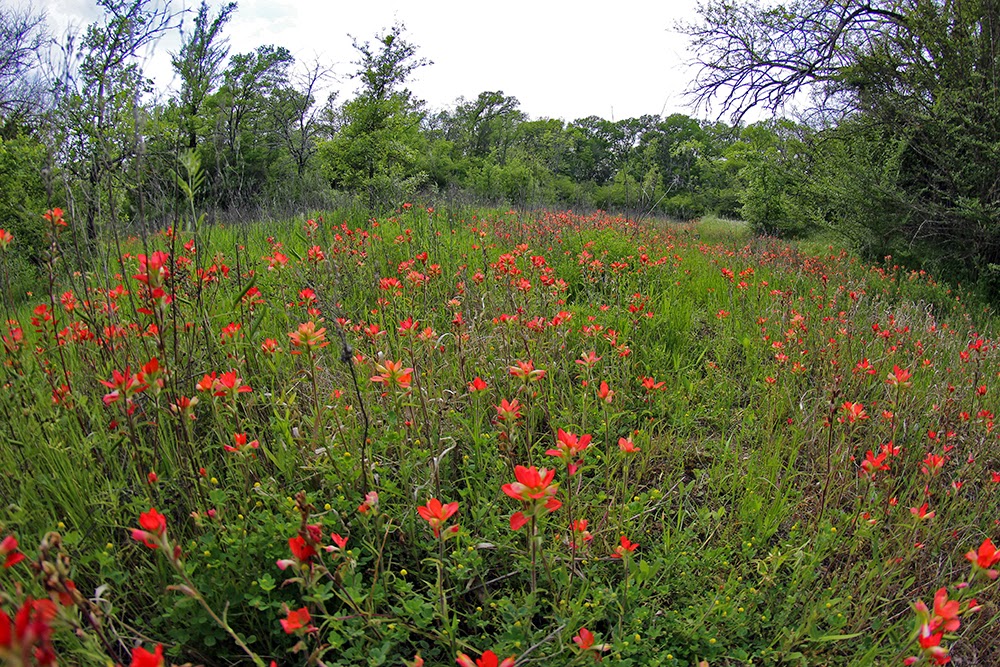 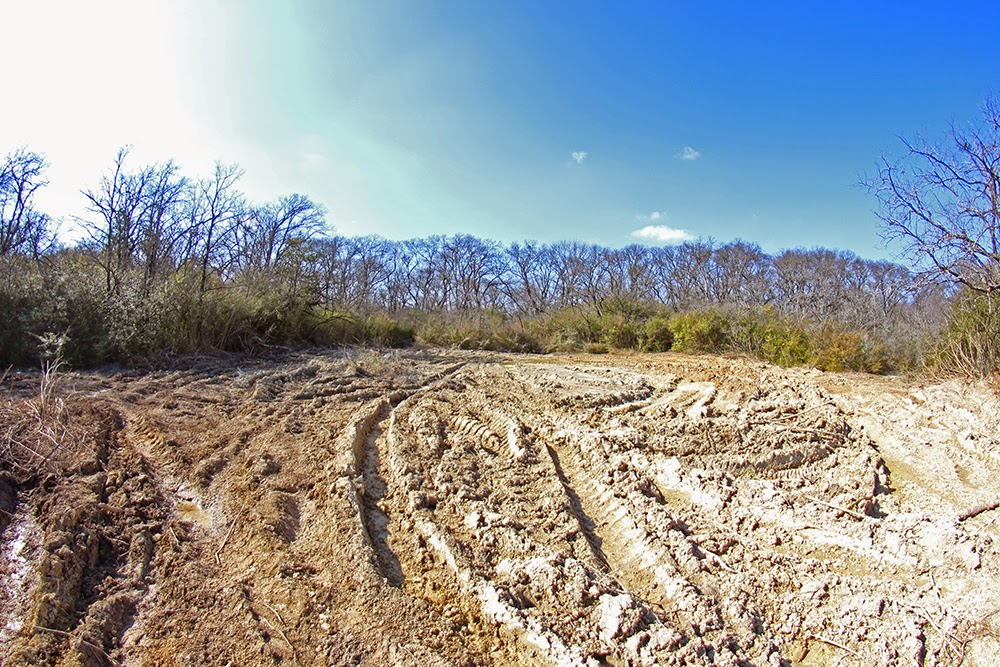 The before and after photos of McCommas Bluff Nature Preserve as they looked April 19, 2014 and February  8, 2015. The devastation is wholesale to a wet meadow area known for spectacular wildflowers.

There is a knoll on the mouth of Elam Creek and the Trinity River which harbors one of only about a hundred known Trout Lily colonies in the State of Texas. Here in McCommas Bluff Preserve through the dappled light of leafless tree branches in the mid winter these harbingers of spring come to life. The colony of trout lilies has flowered here undisturbed for many centuries. Never burdened or destroyed by man.

The wild landscape which some call the Great Trinity Forest, in pockets, appears identical to the way it has always looked. The land that drew Native Americans out of East Texas and on to the edge of the Southern Plains. The land that drew the first European pioneers out of Appalachia to tame the new frontiers of the west. It all sat here, inside what is now the City of Dallas untouched in parts for time immemorial. That is now rapidly changing for the worse.

At the risk of sounding anthropomorphist it almost seems a necessity to humanize a place where no human activity can be seen. The woods here are an old spirit with a feel all it’s own. I always tell folks that they need to get down to the Great Trinity Forest and see her before she is gone. 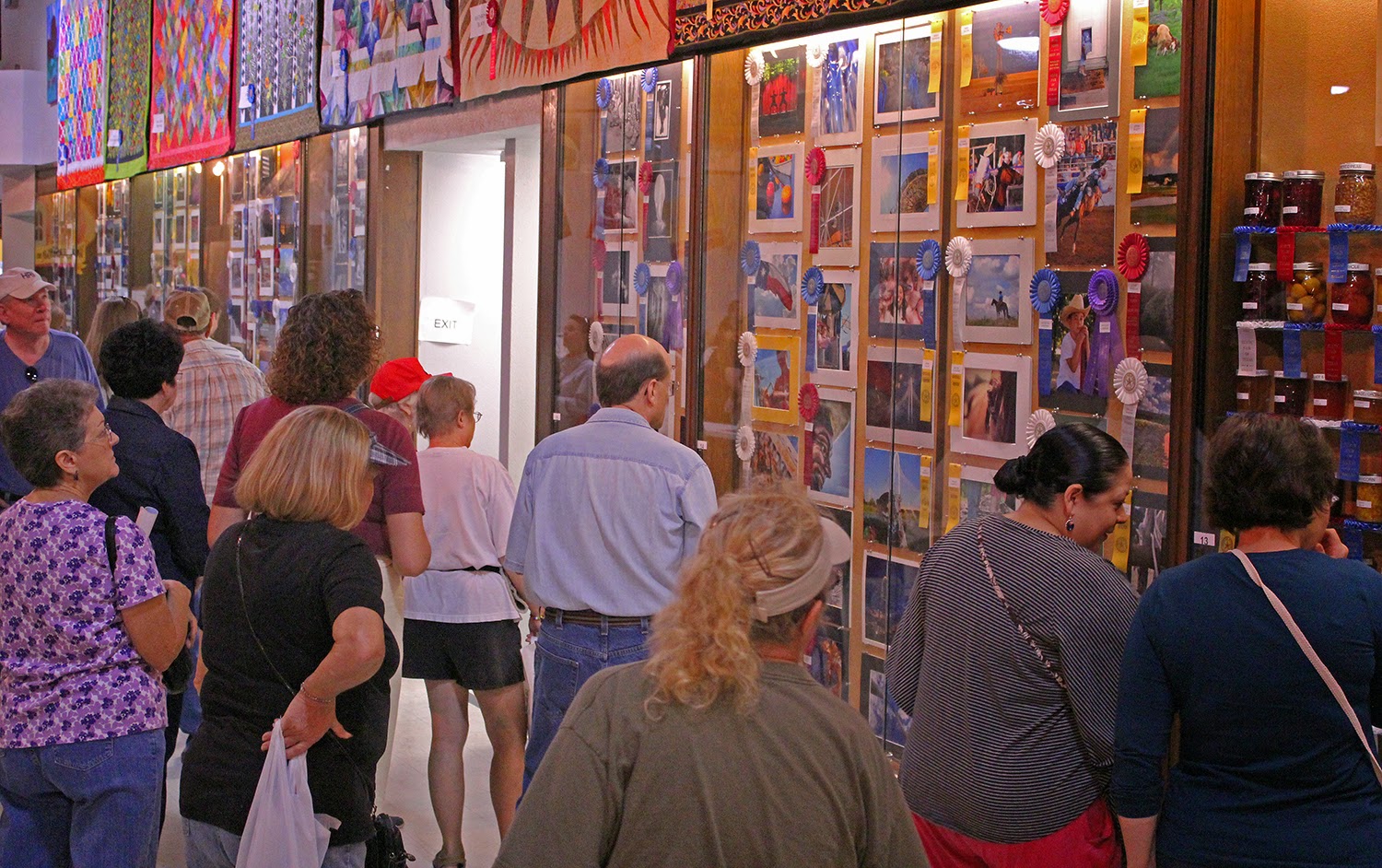 It was among this past year’s State Fair of Texas winners that photographs of McCommas Bluff Nature Preserve were seen by two and a half million people. In the Creative Arts Building, just left of the shelves featuring prize winning pickles and jams stood photos of a picturesque wet meadow tucked into the backside of the Trinity. 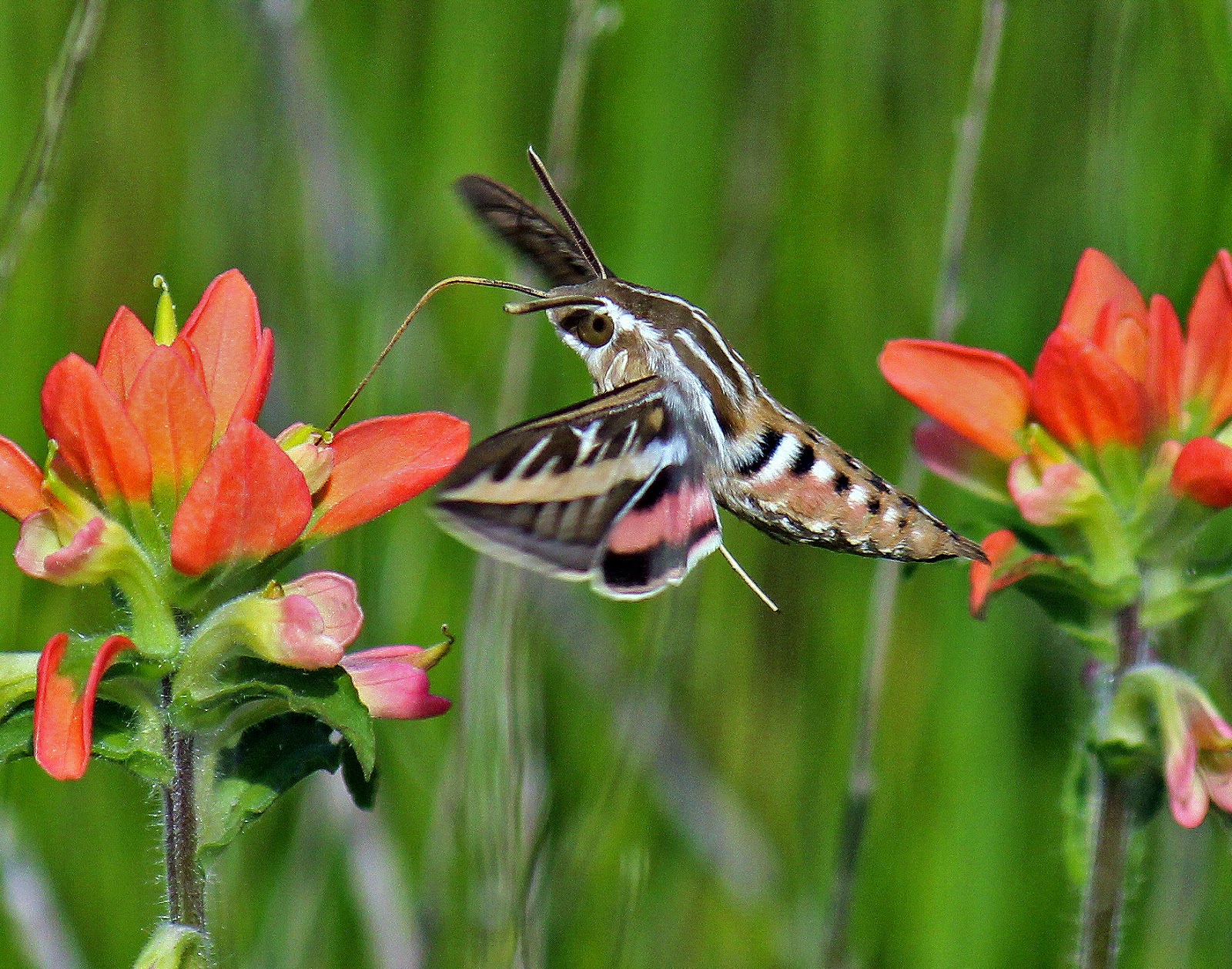 The wet conditions of meadow areas like this can harbor collections of crayfish, toads and frogs. In spring, the damp soils allow wildflowers to soar to record size. The dominant species in April is Indian Paintbrush. Seen above, judged and displayed at the State Fair as one of the best in the State of Texas for the year is a Hummingbird Moth feeding in the meadow among the paintbrush. Bragging rights belong to the flora and fauna here. The exceptionally friendly moth and the large wildflowers provide an excellent study. 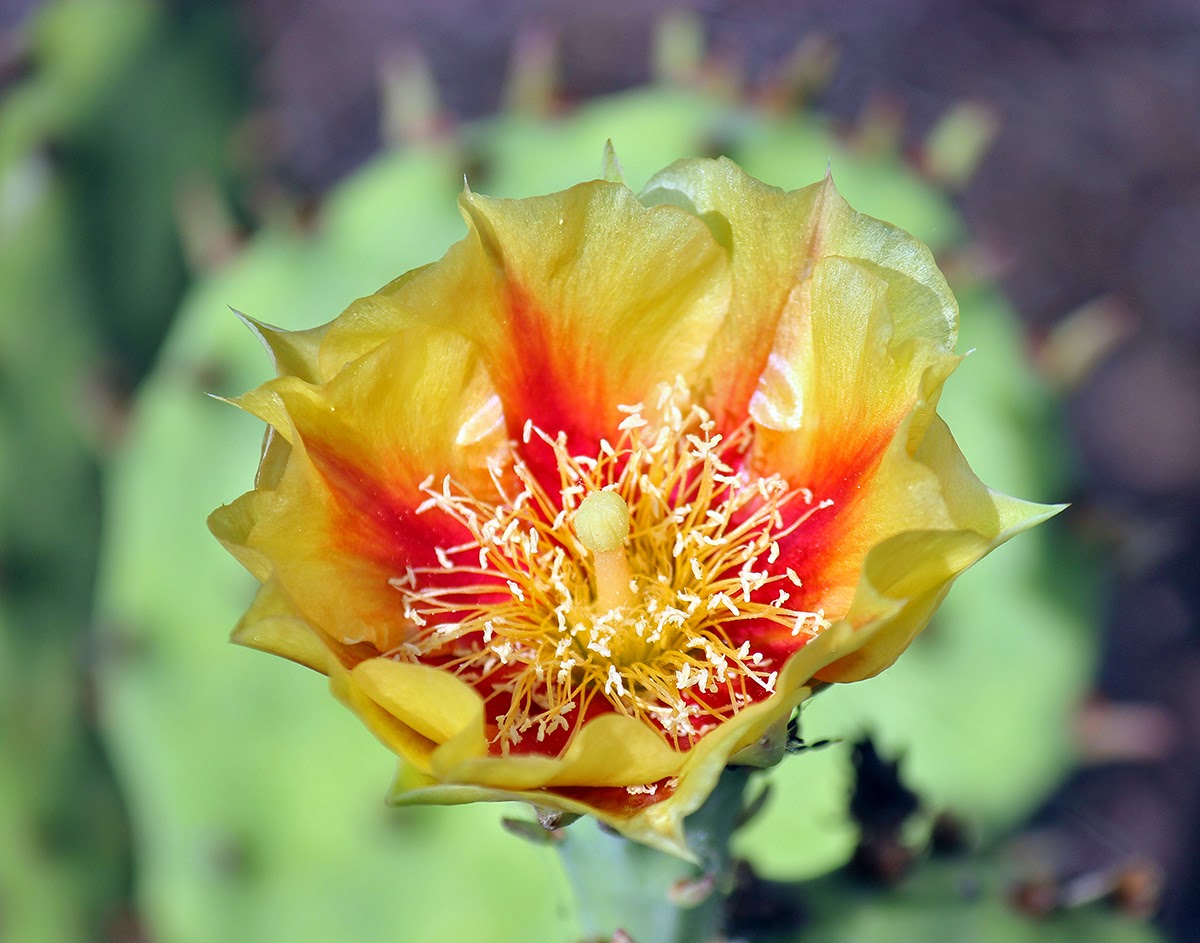 Even the oft avoided Prickly Pear Cactus in McCommas Bluff Preserve can pull of stunning displays of flower color. A remarkable display and showcase of Texas plants within a five minute walk of the Trinity River Audubon Center.

Here is how it looked Saturday April 19, 2014 when the meadow was in full bloom. It was also the visit in which the photo of the Hummingbird Moth was taken. This photo is looking west. The far treeline with the largest trees is Elam Creek which separates McCommas Bluff Nature Preserve from the Trinity River Audubon Center. The area from which those winning State Fair photos were born….

Not just damaged but destroyed in an absolute sense that the change is forever permanent. The area is still damp but is now an absolute rutted mess of mud.

It would only be fair to recapitulate the points of the last land management incident involving the Great Trinity Forest. The clearcutting of public lands, the misuse of Waters of the United States, the draining of a pond, the killing of wildlife in said pond. The seemingly complete indifference of those responsible. In the undulant course of trying to educate those in local government the rough hewn guidelines of land stewardship, I feel as though it has been an absolute and immoral failure on my part.

How and why this happened is not my place to guess. As with past incidents, it takes a lot of cooks in the kitchen to allow these events to transpire.

Finding the damaged area was a breeze. All it took on February 8, 2015 was to follow the path taken by a large bladed vehicle down a right of way and then up into the higher galleries of McCommas Bluff Nature Preserve. Maybe this is for the horse trail construction project? Water utilities? Sewer?

It was September 22, 2014 when I sent an email to the City of Dallas and a host of concerned citizens on future projects slated for work in the near future.  One of which was the Phase V Trinity Trail bridge crossing for horses at Elam Creek. An excerpt of the email:

“-Phase V- One of only two trout lily populations in the Great Trinity Forest exist here. The other near Scyene Overlook. This is inventoried as Trout Lily population #94 (see map), first discovered in February 2014. There are only 100 of these trout lily colonies in Texas, a rare plant species that takes 7 years from seed to produce a flower. The population exists in what biologists call a refugium, a biological island that escaped destruction. The colony here most likely is ancient as the seeds are only dispersed by ants, not wind or birds. Tom Frey with Garland PARD offers a great talk on trout lilies and how fragile they are.

Phase V’s trail crossing alignment could impact the trout lilies in this area. In addition there is a large grove of Texas Buckeyes and Mexican Buckeyes along the limestone escarpment in this area that would be in danger of being ruined if heavy earthwork equipment were to venture off into the woods. This spot is the only one on the entire planet where Texas Buckeyes and Trout Lilies grow in the same space. It is a real undiscovered treasure for the nearby Trinity River Audubon Center who will be able to reap the rewards of successful conservation in this area.

Unless gates and substantial protections are put in place to prevent illegal access on the new crossings, then the TRAC is in real danger of criminal activity. The only thing keeping the crooks with vehicles out is the substantial drop across Elam Creek. Heavy, well built gates need to be installed at Riverwood Road both into McCommas Bluff Preserve and behind the cemetery to I-20.

The bluff top at McCommas Bluff Preserve was wholly destroyed by the lack of a gate at Riverwood Road. See attached photos of before and after.There was a locked gate there for many years, it was removed for a Dallas Water Utilities project by DCI. The contractor(where have I heard of them before) did not replace the gate, did not mitigate their damage and now the bluff top is an eroded moonscaped mess. If you recall this spot is listed as a Texas State Historical Landmark site, a historical marker was dedicated in 1986 at the spot. I have discussed with city staff many times about the need to replace the locked gate here. It has become a haven for criminal activity.“

One can read on what is up Elam Creek through the Preserve in a post from last March
http://dallastrinitytrails.blogspot.com/2014/03/mccommas-bluff-preserve-up-elam-creek.html

As mentioned last year the Trout Lily represents not just the first flowers of the new year. To many, the colonies of these plants represent very rare spots in Dallas where the land was never plowed, lumbered or disturbed in any way. Pollinated by flying insects like bees and seeds dispersed by ants, the Trout Lily is a very immobile species and rare as a result.

It is right about where you run out of water for a canoe paddling up from the Trinity that one spies the Buckeyes. The will be in full bloom about St Patrick’s Day. It is not very hard, if you live in a place like Texas, to find obscure evidence of the legacy that previous generations left us. If you can look past the rust of old metal parts, discarded sun bleached plastic and the borrow pits scattered around….you might just catch a wiff of what forefathers saw in preserving such a place.

The concern, beyond the destruction already in place at the Dallas County preserve is how the construction will impact the really special parts of the Great Trinity Forest. Surely some of the Texas Buckeyes will be chopped down and/or damaged as they grow close to the project site. The trout lilies which grow so close to the creek will be impacted as well.