Bridging the Trinity River at the end of the Central Dallas floodway, the old Atchison Topeka & Santa Fe Railroad Trestle is being retrofitted into a hike and bike path. Below are some recent photos from August 2011 showing the most recent construction progress. The Oak Cliff (south) side of the path is largely complete. The north side still has considerable construction to finish and requires a climb up scaffolding to reach. Even though access to the bridge is easy from Oak Cliff/Moore Park, it’s still an active construction area and should be avoided till complete.

Video riding up the approach and across the Santa Fe Trestle Trail, August 2011: 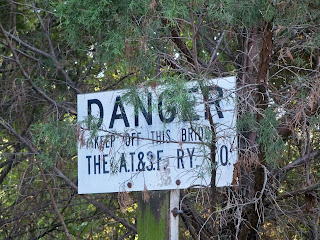 The bridge was originally built in 1926 and served as a main artery for the AT&SF Railroad in Dallas. Some old signs along the old right of way can still be found in the overgrowth. In 1985 the trestle was burned in an overnight fire destroying over half the structure. DART purchased the railway and bridge in 1989 later deciding to build a new bridge next to the old Santa Fe trestle rather than retrofitting the existing bridge. Since that time, the Corps of Engineers has floated the idea of removing it as the bridge acts as a partial obstruction for flood debris during high water.

Below is a photo taken in June 2010, a month or so before construction began on the Santa Fe Trestle Trail and the Dallas Wave whitewater park.
At the time, the riverbank was overgrown with brush, poison ivy and ragweed.
Below is a video clip shot the same day, June 2010 of some fisherman boating up the Trinity River:
Below is roughly the same location in late May 2011, roughly 11 months after the first photo was taken. In the photo you can see the Dallas Wave, whitewater feature. 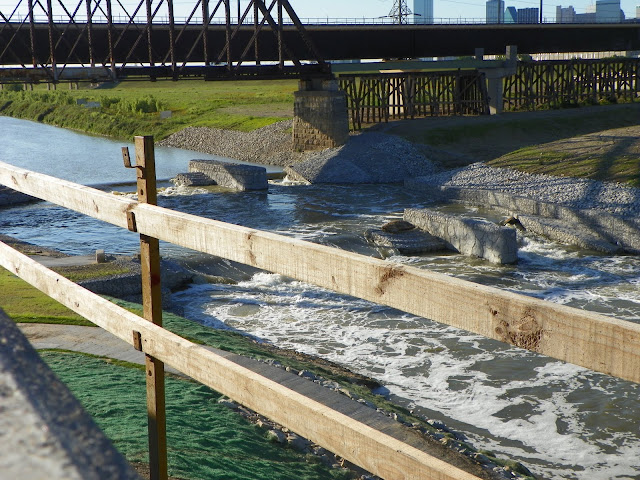 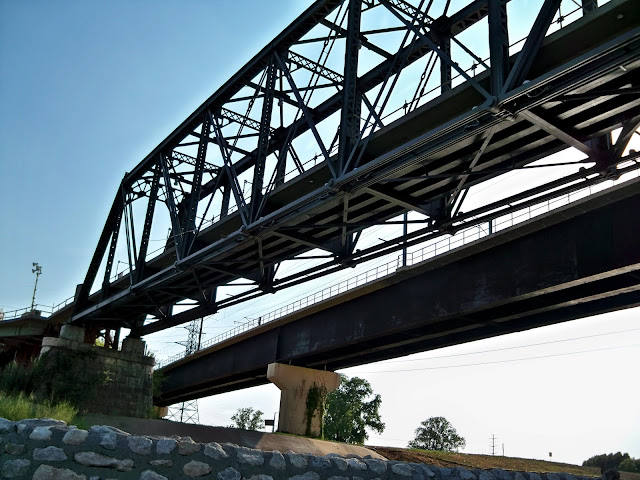 Completion is rumored to be late 2011. The Trestle Trail shares the same name as the Santa Fe Trail that connects White Rock Lake with Deep Ellum. When complete the two trails will not connect to each other. All they share is a similar name. Access to the Santa Fe Trestle Trail will be from Moore Park on 8th Street and from a yet to be constructed parking area near the eastern end of Riverfront Blvd.

To access the levee trail and Santa Fe Trestle from White Rock Lake, I would suggest riding the Santa Fe Trail towards Fair Park. Through Fair Park and down Grand Avenue. Inside Fair Park, Grand Avenue is the gate closest to Big Tex and the main Fletcher’s stand. Head south out that gate. Hang a right on Lamar, left on Corinth, left on Riverfront.

Heads up: In the past I would have suggested riding straight out Grand Avenue and crossing the Union Pacific tracks between the DART tracks and the Andrews Beer Distribution Warehouse. Due to safety concerns regarding recent pilferage of rolling stock, the Union Pacific Police heavily patrol the area. I was stopped once by one of their officers. He was a nice guy, just wondering what I was doing. He also made the point that I should not cross there.

The option of riding down Lamar to Corinth then under the railroad tracks using the Corinth underpass seems dangerous since it is so dark and the vehicle traffic is moving fast. I would have to coin flip which route to take. The easy route over the tracks or the more dangerous but legal Corinth route. Good news if you live in Oak Cliff you have it made!