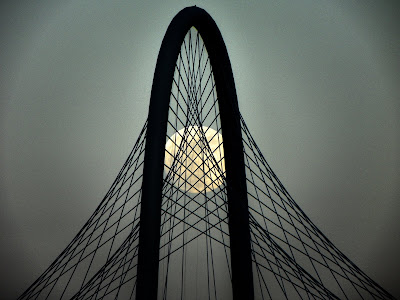 Running through the heart of Dallas at 30 feet high and over 24 miles in length, the Trinity River levees in Dallas have a combined 40 miles of dirt access roads open to the public. An additional 9 miles of soft surface trail are currently under construction inside the levees. The end goal is to connect the Katy Trail, the Trinity River Trails inside the levees, Trinity Strand Trail and the Oak Cliff neighborhood.  The current access roads are utilitarian and serve the maintenance and construction needs of the levees. Good for heavy vehicles not so much for jogging, walking a dog or riding a bike. In the summer of 2011 an initiative was started to bring a new trail concept to the Trinity between the levees. One that would be more attractive to the average Dallasite and serve more of a recreation base than what the current access roads offer. The levee road and future trail are only minutes from the Katy Trail on the north side of the river and one minute from the Coombs Creek Trail that feeds in from Kessler Park on the south side of the river.

Many of the yet-to-be-constructed trails for the Trinity are bought and paid for with bond money as far back as 1996. Tangled in budgets, long range planning and government bureaucracy many of the planned trails are still in the distant future. Years away. The Trinity trail initiative was designed as a quick win solution to put something, anything down between the levees that people could enjoy sooner rather than later.

You can read more about the detailed specifics of the new Trinity Trail near Downtown here on the Team Better Block website:

A couple of city bridge and pump station projects will limit access to the levees in the near future. The closure of Sylvan Avenue for a new Sylvan Avenue Bridge will close Crow Park and the parking lot. The Pavaho Pump Project also commands a good chunk of real estate on the south levee near the Continental Bridge. Another issue is the pace of construction at the Santa Fe Trestle Trail. The trestle trail will serve as a vital crossing point at the southern terminus of the levee. Until the trestle is complete it will be hard for visitors to enjoy both sides of the river.

From the Katy Trail by bike:

Option 1:Ride down to the American Airlines Center, hang a right at the Hard Rock Cafe and go out Continental. You can cross the Continental Bridge to access the south levee from here -or- weave between the buildings that back up to the levee and climb the levee with your bike.

Option 2: Ride down to the American Airlines Center, head north on Victory Avenue under I-35. You will make a left on Oak Lawn where the Meddlesome Moth is located. Head south a couple blocks to where Oak Lawn dead-ends at Levee Street. Weave your way between a building and get up on the levee.

Either route takes less than 5 minutes from the Katy Trail. The route past the Meddlesome Moth is probably more low key traffic wise but does not offer the option of getting to the south side of the river.

Best route from the Arts District or Kessler Park is to hop on the Coombs Creek Trail to where it dead ends behind the Lone Star Doughnut Factory on Beckley. Cross the street and hop on the levee from there. From the Oak Cliff side you have more options for access to the levee since Canada Drive affords easier access.

The new trail is still in a rough cut form at the present time. Below are some photos from over the Labor Day Weekend showing the basic outline of where the trail is headed. Still in a “rough draft” form but easily rideable on a mountain bike. I believe the goal is to make it accessible enough for a baby stroller. Some sections that is already possible.

The levee system was built as a result of the tragic 1908 floods that engulfed much of Dallas. First planned by George Kessler in 1910, the plan was to straighten out the Trinity and limit the dangerous flooding in the future. Leslie Allen Stemmons was the visionary that saw it to completion in the early 1930s. The first levees of the 1930s were smaller and less robust than the ones we see today. Over the years many improvements have been made to keep up with the ever evolving requirements set forth by the Corps of Engineers.

Stemmons created the 10,000 acre Trinity Industrial District out of the now reclaimed river bottoms which contribute an estimated 18% of the tax base for the city. The I-35 corridor, World Trade Center, Anatole Hotel, American Airlines Center and Trinity Design District now sit where the Trinity once flowed. The Trinity Strand Trail will follow the old riverbed through this area.

Many access points exist to get onto the road and trail. The formal trail that the City of Dallas has designated as the Trinity River Levee Trail runs from Trammel Crow Park on Sylvan Avenue to the Westmoreland Bridge upstream, across the old Westmoreland Bridge, then back to Sylvan Avenue. The city spent $300,000 to improve the levee road in this area to make it more of an all weather surface with gravel and brick dust. Best way to enjoy this stretch of trail is to travel clockwise since one has the best view of Downtown Dallas facing downstream from the south levee on the Oak Cliff side. This section is 6 miles in length total as a loop. It is also what one could call an “all weather surface”. It drains well after a rain and can be walked on after weeks of wet weather. The majority of the levee roads throughout the levee system become a nasty gumbo like mess of blackland mud. Avoid.

Photo above shows the old Westmoreland Bridge that was left intact when the new bridge was built in the 1970s. It provides an excellent crossing point if you are coming down the levee from Bachman Lake or from the Mountain Creek area.

The bridge is unofficially called the Bonnie and Clyde Bridge. Given the name since the two notorious outlaws once called this part of Dallas home and used the bridge frequently since they lived on opposite sides of the river from one another. Earlier in the post is a map showing the old river alignment. If you click on it to see a larger version you can get an idea of the hellhole West Dallas once was. A lawless area of murderers, crooks and no goods. Open pit dumps, gravel pits and raw sewage. Much of that has changed and the only telltale that there was once a dump in the area is the small shards of glass that glitter on the lower levee road near the Westmoreland Bridge on the south side. In that era most of the trash was still organic in nature, lots of paper products, plant/animal parts with the exception being glass. That’s what you see.

Note: Access to the Trinity River Levees is limited to non-motorized vehicles, pedestrians and horse traffic. Driving a personal vehicle, motorcycle or ATV on the levee road is forbidden and subject to a fine.

Outside of the designated 6 mile loop between Sylvan and Westmoreland, I would suggest using a bicycle of some kind for exploring the levees rather than on foot. With a lack of facilities such as water fountains or restrooms, seeing it on foot becomes rather difficult. A bicycle with wide tires such as a mountain bike, cyclocross bike or even a beach cruiser will work well. The road surface varies from hardpack dirt to loose sand and gravel depending on the section you are riding.

The photo above shows the end of the levee trail as it approaches I-30 at the Dallas/Grand Prairie border. In the distance you can see the abrupt rise of Oak Cliff and Chalk Hill in the background. A crude ATV trail exists under I-30 and towards Mountain Creek Lake. These trails are a rats nest of trails that only doubleback on themselves and not worth the effort of exploring. The trail surface above is typical of what one finds on the south levee. Pea to marble sized gravel, some places looser than others. As one travels further west on the levees the feel becomes more rural. You pass a couple rodeo rings, horse stables, chicken coops and the random piece of wandering livestock.

The same rural feel holds true heading up the north levee as it begins the gradual swing towards Bachman Lake and Love Field. The levees deaden much of the sound of the city.

Since the area inside the levees is a floodway, the prairie space in the floodplain can remain marshy and muddy for months after a rain. Take caution if you decide to venture off the establish roads as the underlying soil is often mud.

The marshy wetland above runs from the Sylvan Avenue Bridge to the recently built Calatrava Bridge. Quite a bit of poison ivy in this section and quite a few snakes as well. Flash flooding in this area is not an issue. After a storm, much of the water must be physically pumped over the levees by a series of large pump stations strategically placed to de-water areas behind the levees.

The Houston Street Viaduct recently celebrated its 100th birthday. Built in 1910 it was the world’s longest concrete bridge at the time at a price of $600,000. The bridge was formally dedicated and opened on February 22, 1912. The bridge was originally constructed to include streetcar tracks, two sets. That never came to be a reality. The bridge now serves as a one-way north to south route from Downtown Dallas to Oak Cliff.  It was placed on the National Register of Historic Places in 1984.

If you look carefully along the river channel you can find long abandoned bridges and roads that once served long forgotten areas like Eagle Ford and the old Singleton Road alignment.

One stop worth visiting is at the southeast corner of the Commerce Street Bridge. Here you get a decent view of Downtown Dallas and some basic background information on the Trinity River Project. Some of the information is outdated with projects that have been cancelled or are on hold.

Despite the lack of a great running surface and limited access, many West Dallas residents use the levee top trail between Sylvan and Westmoreland in the evenings. Access to a quality facility such as a sidewalk or path in their neighborhood simply does not exist. While the planned Bernal Trail will help add to the infrastructure, long neglected areas like West Dallas simply lack the right kind of areas where people can stretch their legs. In addition, there is not any access to the levees via footbridge catwalk. The residents who use the levee trail in this area must navigate through the often swampy wet areas on the back side of the levees to reach the trail. It’s cool to see people making the best of what they have and taking the initiative to get off the couch in the evenings.

Video clip of the moon rising behind the Margaret Hunt Hill Bridge in June of 2011. I had a general idea of where the moon would rise that evening but due to the haze on the horizon and some high clouds to the east, that trip was a bust. So, I just setup a spare camera on a tripod down near the bank of the river and let it run for half an hour unsupervised. There are so few people that ever get down in the floodplain that I was probably a mile or more away from the camera as it filmed. I was not concerned that anyone would come by and take it.