The handful of times I have ridden this trail it seems I am shadowed by house gawkers driving up Kessler Parkway in their vehicles at 10 mph looking at the homes that line the street. Time to get out of your cars and hit the trail. Part of the Dallas Trail Network Plan, the Coombs Creek Trail in Oak Cliff offers access to the Trinity River Levee Trails and Oak Cliff along the winding Coombs Creek. Phase I of the trail completed within the last year sits at about 1.5 miles in length with another half mile of soft surface dirt trail on the north end that skirts the edge of a dirt berm and levee spillway for the creek. Trail runs from the Stevens Park Golf Course near the Tennis Courts(south end) and roughly terminates behind the Lone Star Doughnuts Bakery on Beckley(north end). The Coombs Creek Trail affords easier access to the Trinity River Levee than most other routes coming from Oak Cliff. While the trail does not quite reach the levees, it remains the best option at the moment for access to/from this part of town. 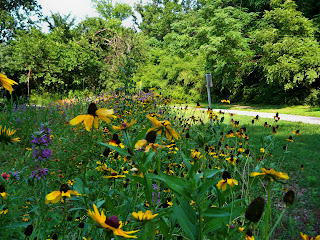 Below is the current southern end of the trail where it dead ends at the Stevens Park Golf Course near Kessler Parkway and Edgefield. Future plans include a build out towards Cockrell Hill.

The southern end of the trail abruptly stops just on the south side of the Tennis Courts. Plans are in the works to expand the trail south at some point. Until then, the city seems to tolerate foot traffic on the golf paths through the golf course. Most public courses require a green fee to be paid prior to entering a golf course, Stevens Park seems to have made an exception per this sign: 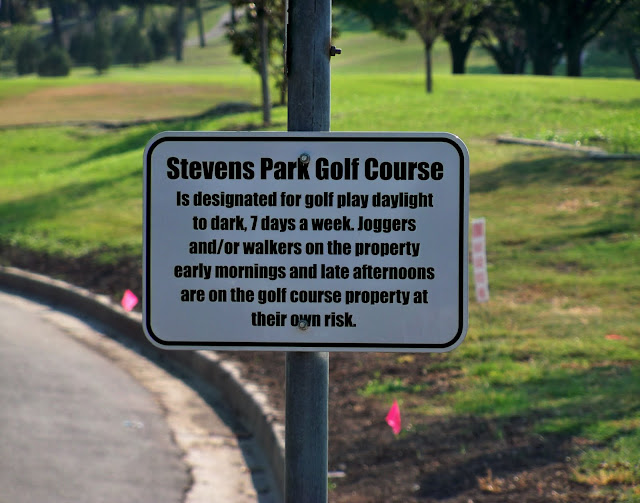 The cart path and elevation changes are really not suited for a bicycle. Better to bail out onto Kessler Parkway if you are using the Coombs Creek Trail as a route to travel to points beyond. This is not that bad of a route to take from the Katy Trail over to the Oak Cliff Nature Preserve since you avoid much of the traffic drama around the Bishop Arts District, Jefferson Blvd and some of the schools. Matter of fact, its the main reason I’m even mentioning a neighborhood trail like this. This trail completely works around Methodist Hospital, the somewhat heavier traffic and the hills. It’s a low traffic to traffic free option if you want to explore this neighborhood.

The Coombs Creek Trail is nearly tabletop flat the entire length. Sylvan Avenue is the only large street to cross and the traffic signals/crosswalk are decent for what Dallas usually offers. Kessler Parkway and the Coombs Creek Trail were purpose designed as a flat winding road on what amounts to a bench cut in the Oak Cliff outcropping. Nearly 90 years ago, County Commissioner Ledbetter of Cockrell Hill wanted a scenic drive from Downtown Dallas, through newly minted Oak Cliff to Cockrell Hill. His vision was to build Kessler Parkway along the creek. To do it he needed to physically move the meandering creek to the west and take out much of the undulating rock in the way. Without a large budget, he simply emptied the Dallas County Jail and used large chain gangs of prisoners to clear the creek and build the roadbed.

Much of the Coombs Creek Trail is shaded by large pecan and oak trees. The creek stays to the immediate west of the trail the entire length. Coombs Creek is actually misspelled. The creek is named after William Coombes, the first pioneer to settle this part of Dallas. He arrived in 1843 from Kentucky with two oxen, a wife, a parrot, a cat and a frying pan. He built the first log cabin in West Dallas near what is now Fort Worth Avenue.

The paved portion of the trail ends 1.5 miles from the Stevens Park Golf Course. From there the trail is soft surface as it approaches Beckley. There is a short and somewhat steep rise to the top of a flood protection levee and gate.

From the point above you can get a good view of the Calatrava Bridge and Downtown Dallas. Here you can continue to follow the soft surface trail around the top of the levee as it curls around to the south and west.

The gate above pumps water from Coombs Creek under Beckley and then over the Trinity Levee just east of the I-30 bridge. This structure was originally built in the late 1920s. It was rebuilt when I-30(the turnpike) was built decades later. Someone got the bright idea in the 1920s that this U shaped high walled levee would make an excellent backstop for bullets. It became the official Dallas Police Department firing range for about 15 years. Here many police officers and even civilians were trained in marksmanship.

The photo above was taken in the same spot as the levee and gate photo. Dallas had a substantial civilian marksmanship program at this range where many women were taught how to use firearms during World War II.

If you continue around the levee on the soft surface trail, it will eventually come to an end at the Coombs Creek Spillway across from the main Dallas Post Office on I-30. Many people who frequent I-30 have seen the spillway which serves as an emergency floodway in case of a biblical flood.

If you want to get from the Coombs Creek Trail to the levees, note the photo above. Travel down the dirt road, through the gate and down the alley to the left. Beckley is on the other side of the building in the photo. In the distance you can see the levee road which will put you at the immediate east of the I-30 bridge. The alignment I have described above is one of the routes the city had on the drawing board to lengthen the Coombs Creek Trail to the levee.

When the Trinity River was moved from its ancient bed to the new floodway, many of the old creeks and tributaries had to be rerouted too. One example is Kidd Springs. Seen above in it’s current outlet, the creek flows underground 1500 feet and drops vertically almost 100 feet to meet Coombs Creek.  This was a large undertaking in 1930 when it was constructed. Nearly all of it was dug through solid rock and once again, prisoner chain gangs were used to do some of the work. It was completed ahead of schedule and under budget.

The photo above shows the massive undertaking. Until the drainage system for Central Expressway was built in the 1990s, this particular project was the deepest drainage tunnel in Dallas.

The Coombs Creek Trail is only a 10 minute bike ride from the Katy Trail. Simply ride over the Continental Street Viaduct, get on the levee road, go up over the levee at I-30 and cross Beckley.
I think many recent transplants to Dallas or architecture snobs would really gain a unique point of view and new perspective to town visiting this area on foot or bike. Like most neighborhoods in Dallas, residents hate people looking at their homes from cars but always seem to welcome those walking a dog or riding a bike. This part of Dallas resembles Highland Park with hills. Check it out.

One Last Trail Ride On The Old Trinity Trail