One Last Trail Ride On The Old Trinity Trail

For over a century, Simpson Stuart Road has quietly disappeared into the riverbottoms of the Trinity River. Making a transition from concrete to asphalt to gravel to dirt to pecan covered forest floor in under a mile. The loud traffic of jake braking 18 wheelers carrying their burden to the McCommas Bluff Landfill quickly yields to near country road silence as one passes the Eco Park development. What was once an area known only by illegal dumpers is slowly being transformed into the new Trinity River Trail. 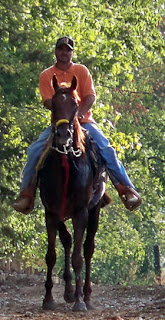 The horsemen in the area have known the day would come when their dirt trail would be paved. For them, horseback riding is a way of life. They grew up in rural ranch settings where their unorthodox looking Mexican saddles were more functional than the western style saddles we see here in Texas. They are experts in their craft. Often taken recently saddlebroken half wild horses on rides through the woods. A few sing and whistle as they ride with only the woods for an audience. Here you can get away with that, they say.

It’s the last ride. The last one on dirt. As you can see above the forms are in place. The dirt has been graded. All that’s left is the rebar and concrete. In a week it will be concrete. The passing of an old trail and the beginning of a new one, the Trinity River Trail. It will connect the Trinity River Audubon Center with the south side of the river then make a U shape around to Simpson Stuart Road(photo above). From there it will connect with Phase I of the Trinity River Trail which skirts Lemmon Lake from Simpson Stuart to Loop 12. More can be read about Phase I in a previous post here

Known as Camp Wisdom Road in western parts of Dallas, the road changes names to Simpson Stuart as it heads east. In the photo to the left you can see the traffic light for the I-45 overpass in the far distance to the west. Vehicle traffic is supposed to stop at the Eco Park building, in the photo you can see where the trail bollards(posts) to keep vehicles from driving down the closed section of road have been removed. In the foreground under the shade of a tree stands a Greater Roadrunner.

This particular roadrunner has been spotted along this stretch of road for years. The Greater Roadunner (Geococcyx californianus) is part of the cuckoo family.This roadrunner is also known as the chaparral cock, ground cuckoo, and snake killer. This particular roadrunner seen in the photo on the right is probably what is responsible for all the small dead snakes that litter the road where it transitions from asphalt to gravel.

As you can see, this part of Dallas has more of a country rural feel to it than an urban environment. A neighborhood once known as Floral Farms, an unincorporated community in Dallas County. Hashed out of a piece of land between the Union Pacific tracks and the Trinity in the late 1940s, the area was annexed by Dallas within the next decade. Floral Farms afforded African American residents a community where they could live in a semi-rural setting and be away from the confines of the highly segregated urban areas at that time. The city eventually bought the homeowners out on a voluntary basis in the 1970s. Unlike Joppa that sits on a high piece of ground, Floral Farms sits not much higher than the river itself making it potentially flood prone. The removal of homes was done in a half-hearted manner so even 40 years later some structures still stand. Outhouses, sheds and foundations are still visible.

Above is what remains of the Pig Park Rodeo in the Floral Farms ghost town/neighborhood. The Pig Park Rodeo began in the late 1970s-early 1980s by two brothers and ran into the early 1990s. The rodeo was very popular with people in the area. I’m still asked about it, where it is, what is left, will it come back.

Above is what is left of the Joppa Rodeo Arena. A dilapidated fence marks the boundary of the old arena. In the background are sets of old wooden pens to hold animals used in the rodeo. The concentric ring you see in the arena is used by current horseback riders for training. Under the weeds, the pillow soft sandy loam  of the arena still exists making an ideal place to train a horse. You can find the location of this old arena on Google Earth. Just look for the figure 8!

So…close one chapter and begin a new one. The city says it wants to open the trail October 23, 2011. I’m not sure that is possible with the ongoing large open pit water main project scheduled for completion in 2012. I sincerely hope it’s not another case of putting the cart before the horse like the Dallas Wave Park where it is opened then promptly closed. We’ll see.

It would be fitting if the trail would open on October 23rd as that date is made famous in the Old Chisholm Trail song. There are 1000 different versus and variations sung by Leadbelly, Roy Rogers, Woodie Guthrie…but the first few lines have always stood the test of time:

Oh, come along boys and listen to my tale
I’ll tell you all my troubles on the ol’ Chisholm trail