Somewhat rare to see coastal birds such as the Roseate Spoonbill this far north in Texas. Exceptionally rare to see the Roseate Spoonbill inside the city limits of Dallas, within a large urban area.  Hunted to near extinction in the early 1900s, the Roseate Spoonbill population dwindled to only 100 breeding pairs in Texas by the 1930s. Their striking pink feathers were popular on women’s hats, and hunters from all over the United States competed for spoonbill plumes. In the early 1900s, roseate spoonbills began to recolonize areas along the Gulf Coast and slowly increase in number. Today, threats to roseate spoonbill populations come as a result of habitat loss. Even by 1979, their numbers had only rebounded to 2500 birds in the wild. Currently their numbers have rebounded substantially enough to be removed from Federal protection as an Endangered and Threatened species.

The video clip below was filmed the evening July 3rd 2011 at Lemmon Lake:

As an older lake, over 120 years old, Lemmon Lake once served as a private fishing and hunting lake to well heeled Dallasites at the turn of the last century. Over time, the lake as slowly started to silt in creating an ideal shallow water environment for wading birds, alligators and snakes. Sightings of venomous snakes and alligators are common here.

The Roseate Spoonbill, Ajaja ajaja, (sometimes placed in the larger genus Platalea as Platalea ajaja) is a gregarious wading bird of the ibis and spoonbill family, Threskiornithidae. It is a resident breeder in South America mostly east of the Andes, and in coastal regions of the Caribbean, Central America, Mexico, and the Gulf Coast of the United States. 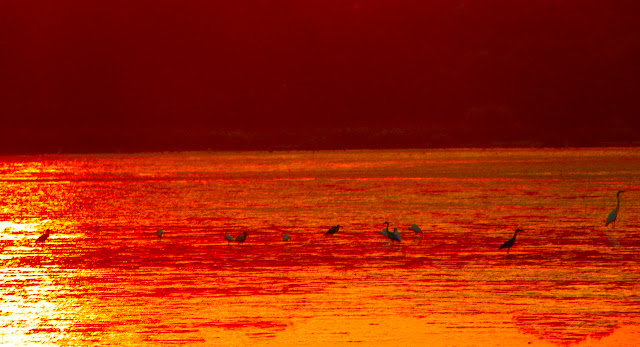 Spoonbills consume a varied diet of small fish, amphibians, aquatic invertebrates, and some plant material. They feed in the early morning and evening hours by wading through shallow water with their bills partially submerged. As a Roseate Spoonbill walks it swings its head back and forth in a sideways motion. When the bird feels a prey item it snaps its bill closed, pulls the prey out of the water, and swallows it.

Lemmon Lake is by far the single hardest body of water to reach on public property in Dallas. Remote not just in its geographical location but also in the way the forest has encroached on the lake itself. Triple canopy woods, briar patches, poison ivy clog any route to the shore. Once one gets within 100 yards of the lake itself one must navigate around swampy areas and a 30-50 foot buffer of reeds and cattails before getting an unobstructed view of the lake itself. Evidence of alligators from their tracks and wallows are everywhere in the cat tails. Great caution should be taken walking through this area. The reward of visiting such a place are encounters with birds and animals you will not see anywhere else in North Texas.

Evidence of animals in the shoreline reeds and cat tails can be seen in the photo below:

Can you spot the coyote? I could not, till I accidentally spotted it while looking through the photos I took. Had no idea it was there.

A closer view of the same photo, coyote on shoreline in the right of the photo:

Closest address is below

Better to travel via foot or mountain bike to this area rather than leaving your vehicle near the dead end of the road.