168 years ago July 12-15 1843 Sam Houston President of the Texas Republic and his men camped at White Rock Springs near the mouth of White Rock Creek and the Trinity River. He and his diplomatic corps stayed in the company of the Beeman family who called the fine bottom land home. Unlike most of Dallas, this part of Dallas looks the same as it did when President Houston and his men rode through to make peace with the Indians. White Rock Spring is the sole survivor in regards to historic DFW area springs. Buzzard Springs, Cedar Springs, Kidd Springs, Grapevine Springs, Bone Marrow Springs. All gone. The City of Dallas recently purchased the land surrounding the spring and many other neighboring parcels for a future park. A tip of the hat to the Pemberton family who have kept the land around the spring in its near original condition for many generations. Currently a crude right of way exists between Rochester Park, across White Rock Creek and then down to the future Texas Horse Park to Elam Road and beyond to the Trinity River Audubon Center. A trail is planned through the area highlighting the spring as a focal point.

During his final term as President of the Texas Republic, Sam Houston’s chief concerns were Indian relations, war clouds on the horizon with Mexico and Texas annexation into the United States. Sam Houston, who had lived with the Cherokees for years as a young man, had a fondness for the tribes and wanted them treated fairly as their lands were taken over by civilization despite their depredations against the settlers in Texas.

For many months Houston sent messages to his Indian friends proclaiming he would hold a Grand Council of the Tribes at Fort Bird(presently in the Mid Cities area) during the full moon of August 1843. Similar to what we might consider a general assembly meeting of the United Nations.  Houston sent Indian Commissioner Joseph C. Eldridge out months in advance of the date to bring the Comanches and others to the treaty council.

It was in July 1843 when Sam Houston and an expedition of about 30 men departed Crockett in East Texas, and began their trek to the Three Forks of the Trinity to negotiate with the chiefs of the Indian tribes.  Their route was well documented traveling roughly on the same route into Dallas that US Highway 175 takes today. This route was an ancient Pre-Columbian trail used by Indians for many centuries as an imporant trade route between the Piney Woods of East Texas, the Plains and Indians living north of the Red River. Scyene and Preston Roads share similar distinctions in Dallas as ancient Indian trails that later became major roads.

Sam Houston made Indian policy a principal concern of his second administration. On July 1, 1842, he appointed a commission to “treat with any and all Indians on the Frontiers of Texas.” The Indians, too, were more open to negotiation after the costly wars under the Lamar administration had reduced their numbers. In August, they agreed to a peace council at the Waco village on October 26, 1842. They failed to attend on that date, but on March 31, 1843, chiefs of nine tribes accepted an invitation to a Grand Council to conclude a treaty of peace. The nations present were the Republic of Texas, the Delaware, Chickasaw, Waco, Tah-woc-cany, Keechi, Caddo, Ana-Dah-kah, Ionie, Biloxi, and Cherokee.
They met six months later and on September 29, 1843 signed one of the few Indian treaties ratified by the Republic of Texas Senate.

A man who was traveling with Houston, an Englishman named Edward Parkinson wrote an account of Houston’s journey, mentioning sites of note, and a typescript of his diary is in the collections of the Dallas Historical Society.  Other notable members of the entourage included future cabinet members of President Jefferson Davis in the Confederacy, future Civil War generals, Indian Fighters, judges and few rascals thrown in for good measure.

Parkinson described in his diary the difficulties and trials encountered by the expedition.  The men had to literally hack their way through groves of Bois d’arc trees in the Trinity River bottoms east of present day Dallas before crossing the river, were overtaken by hordes of insects and killed buffalo to sustain themselves. President Sam Houston and his men met with John Neely Bryan on July 14th in what is present day Downtown Dallas near the Old Red Courthouse as they were passing through to Bird’s Fort. A couple men from the group were taken with fever and stayed behind at White Rock Spring unable to continue on. White Rock Spring was a great place to stay behind since Dallas at the time was largely a barren plain with little shade in the heat of the summer. They stayed in the company of John Beeman and his family who were the first family to settle in Dallas.


John Beeman chose the White Rock Spring area off present day Pemberton Hill Rd to settle. John Beeman migrated to the Peters Colony which was part of Nacogdoches County at the time. On April 8, 1842 John Beeman, brought his family to White Rock Creek; building his cabin and planting the first corn in Dallas County. He initially built a fortified “blockhouse” a two story prairie defensive tower house just south of present day Military Parkway. He later moved to the Pemberton Hill area the next year. After annexation John Beeman was elected the first US Congressman to represent North Texas.

The photo above shows a grove of walnut and pecan trees directly north of White Rock Spring. The single walnut tree just to the left of the road has seen quite a bit of history. The story is that the tree has two spikes driven in it on the trunk. One to note the high water mark of the great 1908 flood that destroyed much of Dallas. A second spike, even higher, noting the high water mark of the 1866 Trinity River flood.

When Houston arrived at Ft. Bird, several tribes had shown up but did not want to go near the garrisoned fort fearing a trap. Houston moved the negotiations and camps six miles north to Grapevine Springs.  He felt the Springs offered better water, more shade in the summer heat and less mosquitoes.  However the group camped there for more than a month while awaiting the Comanches, and was described by Parkinson as:  “there were some fine though rather monotonous days, only relieved by finding a bee tree or killing our beeves.”
Finally Houston realized the Comanches weren’t coming and decided to have a council with those in attendance.  Known as a flamboyant dresser, Houston’s attire for the occasion was noteworthy.  “Donned in a purple velvet suit, with a huge Bowie knife thrust in his belt, and a folded Indian blanket draped over one shoulder to proclaim his brotherhood with the red men, Houston eloquently promised the chiefs that a favorable treaty line would be drawn beyond which the Indians could live unmolested by white men.”

At this time, along with the negotiations with the Indians, Houston was still President of the Republic and having to deal with the Mexican situation and annexation of Texas.  Before the actual treaty was signed, he had to go back to Washington on the Brazos to deal with these issues personally.  To deal with the Comanches when, and if, they arrived he assigned Gen. Edward H. Tarrant and Gen. George Whitfield Terrell. The treaty was signed in the last three days of September 1843.


The Treaty at Birds Fort was a rare instrument: it was actually ratified by the Republic of Texas Senate. Throughout both his administrations, Sam Houston worked to negotiate with the Texas tribes, not only because of his natural inclination but also because the new Republic simply could not afford to be at war both with the Indians and the Mexicans. His policy had already been put into practice when he and John Forbes negotiated a treaty with the Cherokee on February 3, 1836.

President Mirabeau B. Lamar, on the other hand, was convinced that the tribes were conspiring with the Mexicans, and he also believed that the tribes constituted a foreign nation in competition with the Republic. He actively supported a policy of extermination and expulsion, a policy which removed the Cherokee altogether and which helped plunge the new nation into considerable debt.
The Englishman Parkinson in his journal noted that the rough draft for the conditions of the Birds Fort Treaty were discussed and drafted in route including at White Rock Spring.

Below is the last page of the Bird’s Fort Treaty 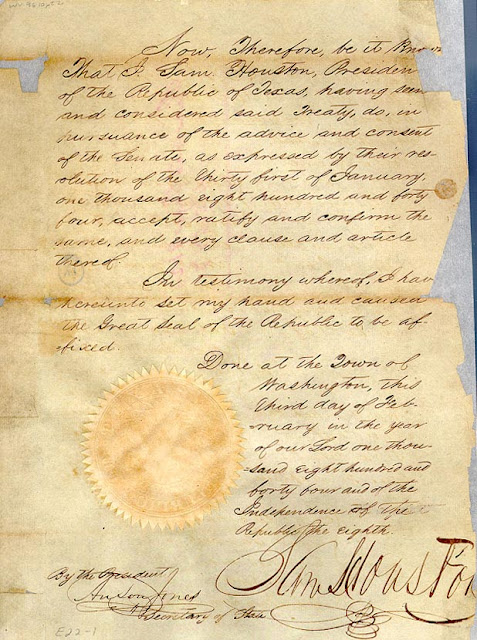 Now, Therefore, be it known
That I, Sam Houston, President
of the Republic of Texas, having seen
and considered said Treaty, do, in
pursuance of the advice and consent
of the Senate, as expressed by their res-
olution of the thirty first of January,
one thousand eight hundred and forty
four, accept, ratify and confirm the
same, and every clause and article
thereof
In testimony whereof, I have
hereunto set my hand and caused
the Great Seal of the Republic to be af-
=fixed
Done at the town of
Washington, this
third day of Feb-
=ruary in the year
of our Lord one thou-
=sand eight hundred and
forty four and of the
Independence of the
Republic the Eighth.
By the President
Sam Houston
Anson Jones
Secretary of State
Roseate Spoonbills and Wood Storks at Lemmon Lake Joppa Preserve