Quite a bit of buzz lately about a near record size alligator that was killed in Leon County halfway between Dallas and the Gulf of Mexico. Dallas attorney Levi McCathern killed a rather large alligator weighing in at a claimed 880 to 900 pounds and 14 feet long(later revised by game wardens to 13 feet 1 inch, animal was seized by the State and those involved charged with a Class A misdemeanor). You can read the original story about it here prior to their arrest:

Texas Parks and Wildlife says that current record was set in 1998 outside of West Columbia, Texas at 14 feet 4 inches. The world record for the largest alligator was set in 1890 in Louisiana at 19 feet 2 inches. Texas doesn’t have records on file for alligators caught before endangered species protections were lifted here and hunting resumed in 1985, so it’s possible that Texas alligators used to be even bigger.

A Dallas man and three fishing and hunting guides from Crockett have been charged with taking wildlife on private property without the landowner’s permission following a state game warden investigation into the death of a 13-foot, 1-inch alligator killed in Leon County. Named in arrest warrants filed Tuesday were 42-year-old Levi McCathern of Dallas, the hunter who allegedly killed the alligator, and the three guides, Steve Barclay, 47; Sam Lovell, 56; and Ryan Burton, 21. Barclay and Lovell operate a guide business called the Gar Guys. The four men were expected to turn themselves in Wednesday at the Leon County Sheriff’s Office in Buffalo.

State game wardens in Leon and adjoining Houston County began an investigation when a man who owns land on the Trinity River in Leon County reported that a large alligator had been killed on his property without his consent on June 11. He also said a second, smaller ‘gator was taken on his property the day before.

Taking wildlife on private property without the landowner’s consent is a Class A misdemeanor punishable by a fine not to exceed $4,000, confinement in jail up to one year or both.

In addition, the Texas Parks and Wildlife Department will seek restitution for the two alligators, an amount likely to exceed $5,000.

The case was investigated by Game Wardens Oscar Henson and Logan Griffin of Leon County and Zack Benge and Eddie Lear of Houston County.

The ‘Gar Guys,’ Barclay and Lovell, are full-time, licensed, bow-fishing guides from Kennard. They specialize in guiding alligator and alligator gar fishing adventures. Their hunting ground runs mainly north of Lake Livingston to the Houston County area. Barclay and Lovell developed the nickname of the “Gar Guys” from a local fisherman who would see their choice of catch and say ‘oh here comes those gar guys.’ After making a 90 minute DVD/VHS video entitled “Let’em Roll” that featured daytime footage of three remarkable excursions in which the duo captured 19 trophy gar with four weighing over 200 pounds, the ‘Gar Guys’ became an overnight success and decided to turn their hobby into a permanent gig.

The American alligator, Alligator mississippiensis, is a rare success story of an endangered animal not only saved from extinction but now thriving  and has made a tremendous come-back over the past 30 years. In 1969, Texas provided complete protection for the American alligator and classified it as endangered after passage of the Texas Endangered Species Act in 1973. Under this protection, along with Federally implemented regulations eliminating unregulated alligator hide markets in the United States, the species has made a full recovery and was delisted from the status of endangered in 1985. The alligator is now a protected game animal in Texas. Special permits are required to hunt, raise, or possess alligators. 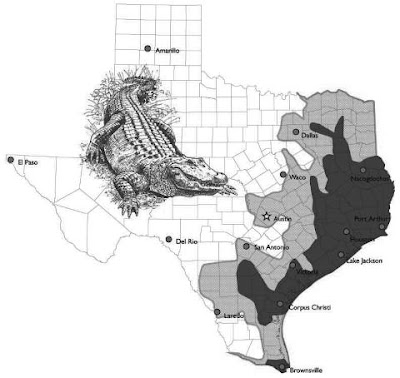 The winters in the Dallas Fort Worth Metroplex are right on the fringe of what an American Alligator can tolerate. The long periods of prolonged cold and hard freezes really reduce the ability of an alligator population to establish itself. They are still around in some numbers but lack the prolific population boom seen in some other sub-tropic transplants like birds and nutria. The only alligators I have seen here in Dallas are 2 1/2 to maybe 4 feet on the upper end.

In the past, large alligators in Dallas have made the news. In the 1960’s JJ Lemmon the owner of a private hunting and fishing club on the Trinity River just south of Loop 12/Ledbetter shot and killed a large alligator at the lake that bears his name to this day:

I have seen a handful of alligators in the named and unnamed ponds and small lakes that dot the Great Trinity Forest in Dallas. They are very elusive and very hard to spot since they are ambush predators and have a very low profile. I have always seen them near dusk and at quite a distance. The two photos I have posted here including the first photo and the one above are really the only two decent photos I have of Dallas alligators. The light is usually too low and they are too low profile to be seen much less photographed.

American alligators normally avoid humans, but they can become perceived as a nuisance when they establish territories around people. As human populations in Texas continue to expand, there have been an increased number of encounters between people and alligators. Alligators have been known to prey on pets and must be treated with caution. Alligators can be surprisingly quick on land and are capable of running quickly over short distances.

Both Joppa Preserve and McCommas Bluff Preserve are in southern Dallas County north of I-20. An even larger population of alligators is said to exist in the Goat Island Preserve south of I-20, also in Dallas County.

Unknown to many, Dallas also has a special nature preserve in South Dallas County called the Palmetto Alligator Slough Preserve. It is currently off limits to the public due to the nature of the swampy terrain and extraordinary palm colony.

For the most part any hunting of alligators is against the law here in Dallas County. The TPWD has strict guidelines on hunting alligators and requires a permit and adherence to strict rules.

Video of dead alligators on White Rock Creek in Dallas

In Dallas you are more likely to see a dead alligator or alligators like in the youtube clip above. This was filmed in mid-June 2011 on Lower White Rock Creek as it approaches the Trinity River. I believe the alligators became entangled in this soccer net and were unable to free themselves.

Read more about the Texas Parks and Wildlife Regulations on alligator hunting here:

I imagine if you are reading this you are not Jerry Jones attorney. You probably don’t have the big bucks to hire a guide or a week to take off of your life to trackdown a big lizard to brag about. Have no fear! The Trinity River especially in Dallas has such a sorry reputation as a fishery that many people, the vast majority avoid it like the plague. As a result, many of the State water body records are easy to break, some for taking fish with a fly rod are wide open. The youth water body records for the Trinity River are almost wide open.

As you can see the record book is quite empty for the Trinity. Fish are quite abundant even between the levees near Downtown. While the fish are deemed to be inedible for health reasons, someone could easily set some records near downtown if they felt the urge.

Here are the official rules for submitting a record fish in Texas: