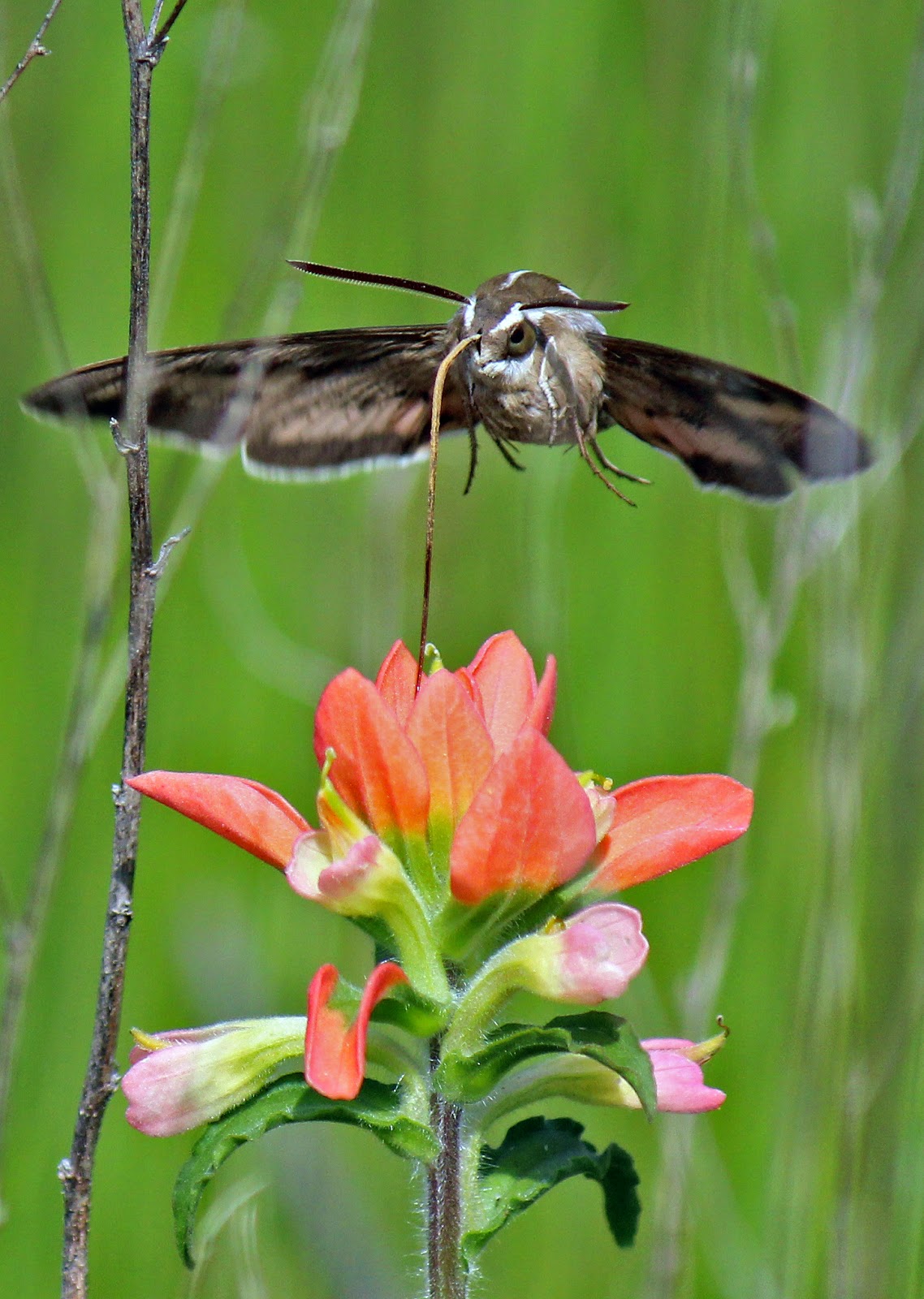 Crepuscular is a term seldom used in common conversation. It’s a time of day around dawn or dusk when certain animals get out and roam around. For photography or general exploring it often lends itself to the most photogenic scenes and greatest swath of wildlife visible in daylight hours.

It’s the golden hours of sun and shadow when the light hits much of the landscape in a way that a camera cannot simply capture. The photos shown were all taken at McCommas Bluff Preserve on the high terraces of Pleistocene sands on the east banks of Elam Creek not far from the Trinity River Audubon Center. Access is easy from the Audubon Center, from the dead end yellow gate on Fairport or from Riverwood Road. An old dirt ranch road follows the terrace up along a series of stepped terraces and borrow pits. Cactus and wildflowers abound here.

That long latin rooted word Crepuscular, was most likely in use around the same time the nomadic Comanche stormed across the Southern Plains. A people without a written language they used oral storytelling to speak of their history and the world they encountered.

Comanche Legend Of The Paintbrush 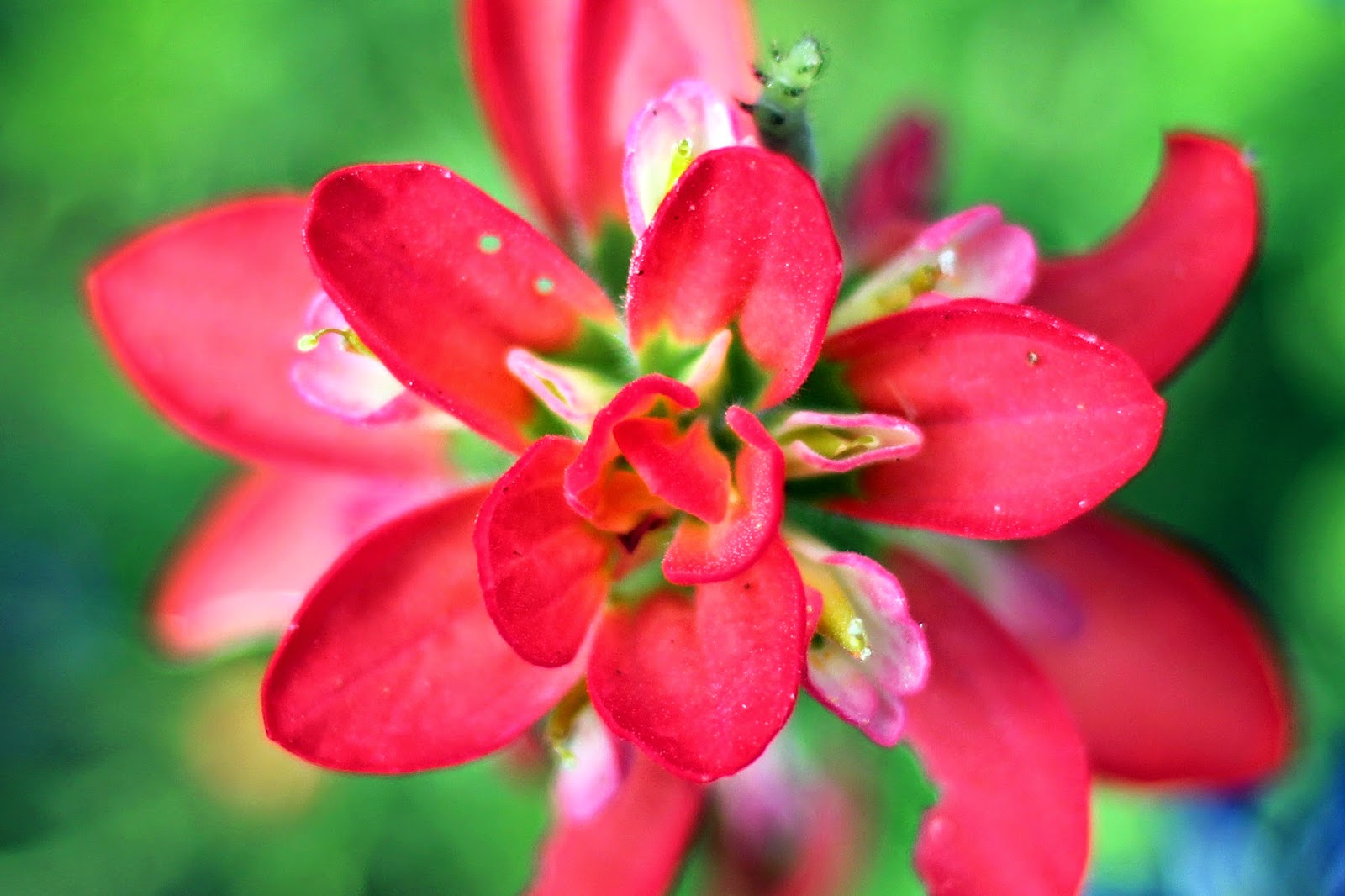 “Little Gopher had a dream.  The vision told him to find a white buckskin and keep it.  One day he would paint a picture “that is as pure as the colors in the evening sky.” Although he found the buckskin, Little Gopher could not find the right colors. However, one night a voice told him to go on top of a hill the next day at sunset. The voice said, “Because you have been faithful to the People and to your true gift, you shall find the colors you are seeking.” The next evening, Little Gopher found paintbrushes the colors of the sunset all over the hill, and he painted his masterpiece. When he returned to his tribe, Little Gopher left the paintbrushes behind.The next morning the paintbrushes were all over the hills and had turned into beautiful flowers.  Little Gopher became known as “He-Who-Brought-the-Sunset-to-the-Earth.” –Comanche Nation 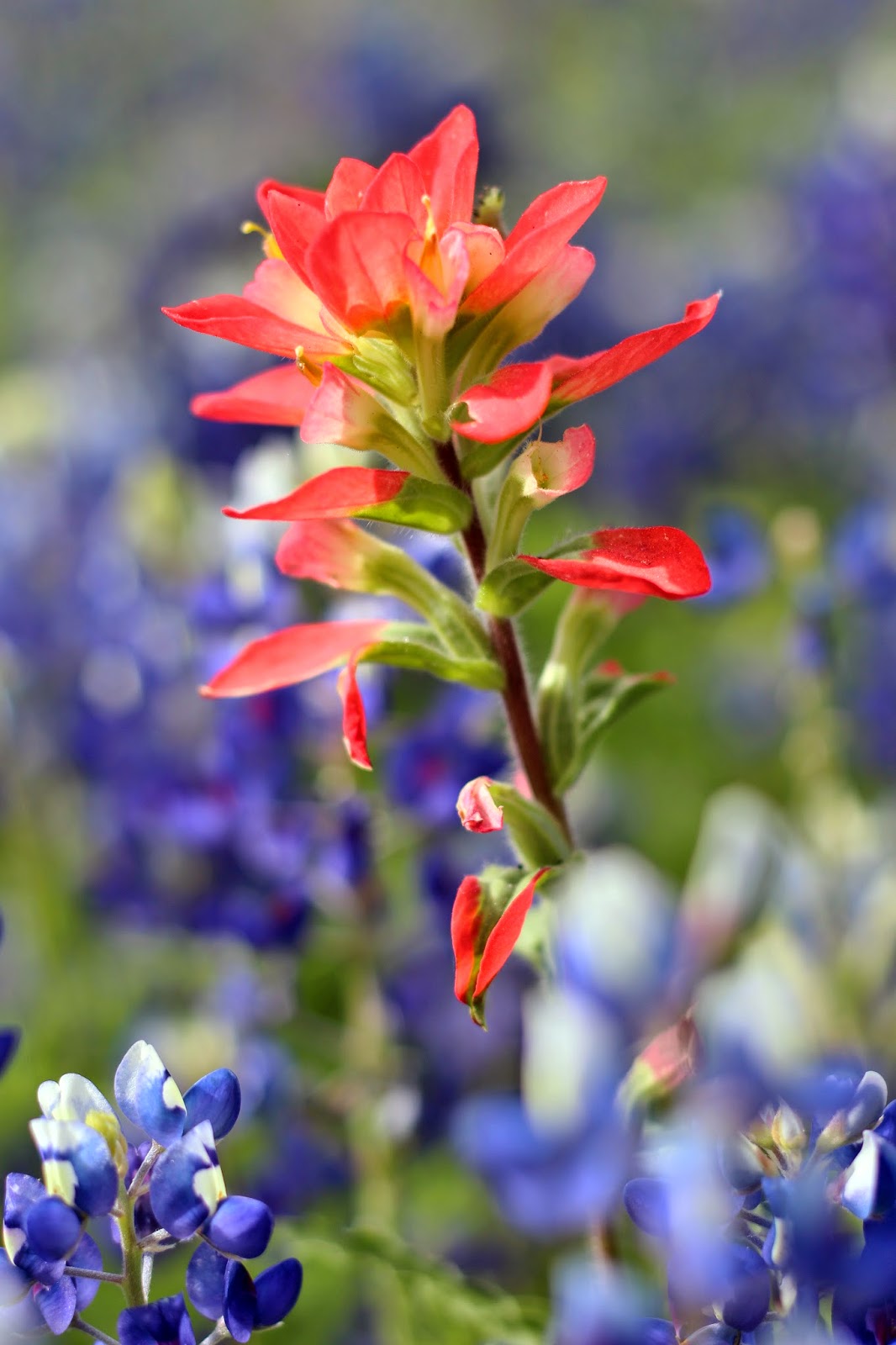 Castilleja indivisa, commonly known as Texas paintbrush or entireleaf Indian paintbrush, is a hemiparasitic annual wildflower native to Texas and Oklahoma in the United States. The bright red leaf-like bracts that surround the white to greenish flowers make the plant look like a ragged brush that has been dipped in red paint. They sometimes produce a light yellow or pure white variation mixed in with the reds.

There are a couple interesting things about this familiar wildflower. The colorful blooms that make it so remarkable are not actually the flowers. They are the leafy bracts surrounding the very inconspicuous and subdued greenish white flowers at the very tip. Much like a Christmas Poinsettia, all the action is in the specially formed leaves. One can see this once you know what to look for, as the color sort of shades back to green as you move down the stem.

A casual observer may not notice that Indian Paintbrush is almost never seen alone. Some wildflowers like Texas Bluebonnets or Clasping Coneflower form huge monolithic stands, but Indian Paintbrush is almost always scattered through an area with other plants. The reason for this is that, although it looks just like any other green forb to the layman, Castilleja is actually parasitic on other plants. In fact, it comes from an entire family of plant-on-plant parasites,  called Orobanchaceae. Although levels of parasitic behavior range greatly in this family, they all have a defining characteristic: haustoria. 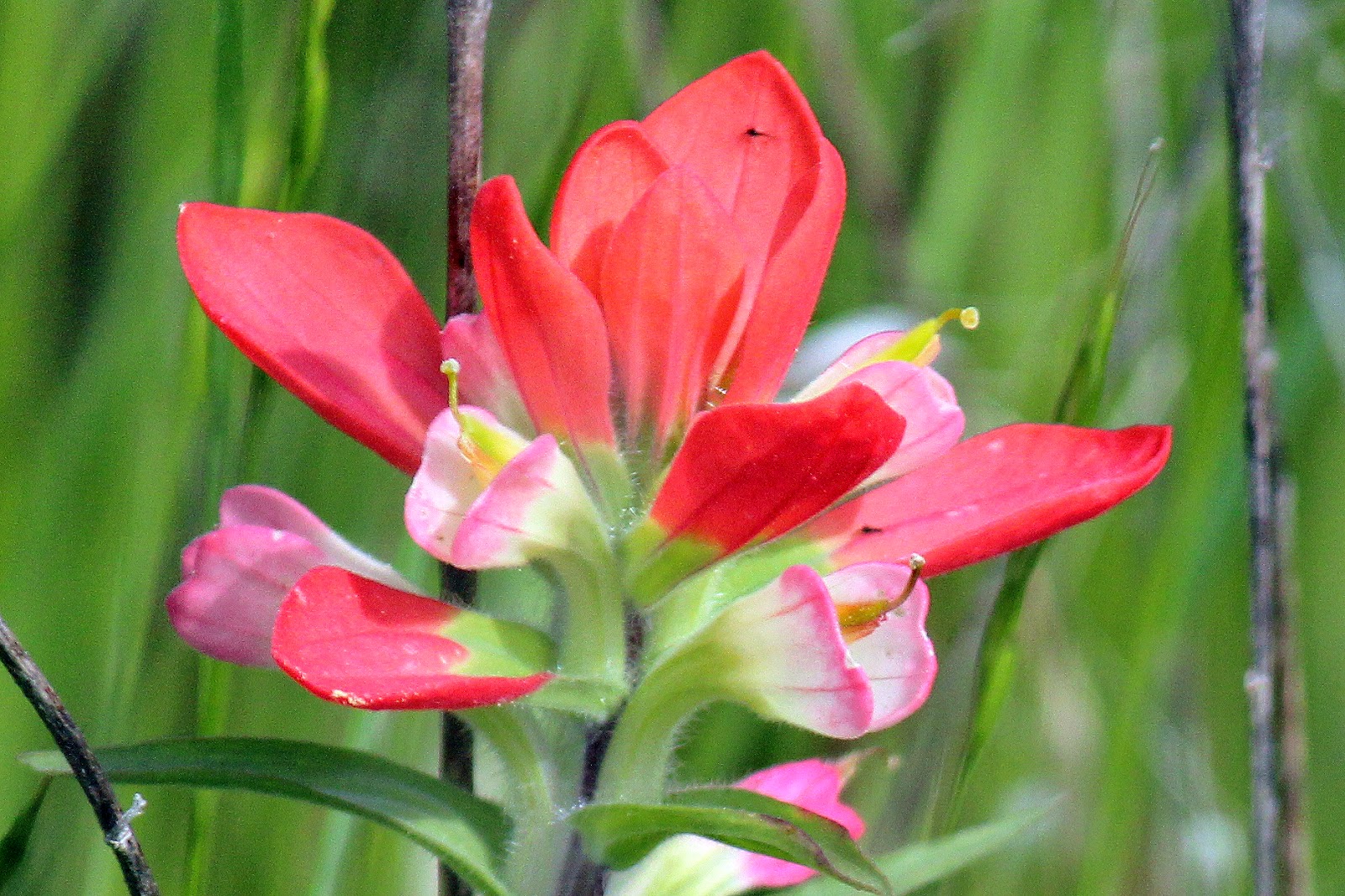 Haustoria are specialized roots that drill into the roots of other plants for the purpose of stealing their resources.  Of the parasitic plants found in this family, Indian Paintbrush is actually a fairly mild parasite, known as a root hemiparasite. Since they have fairly normal green foliage, they can photosynthesize on their own. But they get a huge boost in overall fitness from stealing moisture and other essential nutrients from a host plant. This may be an adaptation to places where resources, like water, are limited, the growing season is short, or in the case of many Texas prairies the soil is poor.  And while in the wild Indian Paintbrush aka Castilleja is almost never found without a host, they can technically survive on their own, although they are much less robust in every way if grown in isolation. Indian Paintbrush also does not kill its host plant, although it often does take a toll on its health and growth.

“Hummingbird Moth” is a general term applied to many medium to large moths in the Sphingidae family and Hemaris genus of moths.There are over 1,000 species of these moths worldwide, and roughly 125 of them can be seen regularly in North America. Also called sphinx moths, hawk moths, clearwing moths and bee-hawk moths, and in the caterpillar stage, they are called hornworms. It is the caterpillar stage that often causes people consternation. They superficially resemble the tomato hornworm, but are more conspicuous and often more numerous.

Hyles lineata is an animal of open habitat, they are most abundant in prairies, agricultural lands and fallow fields. In the western United States, the White-lined Sphinx is a resident species from southern California to Texas. It disperses via migration annually farther north. Rarely is this moth a pest, though the caterpillars occasionally do damage to grapes and tomatoes in far western states.

The adult White Lined Sphinx moth can be active at almost any time of day or night, and visit a wide variety of flowers for the nectar they use to fuel their rapid, energetic flight.

Unlike the majority of Texas moths one might encounter,  this species is already unusual by being active during daylight hours. However it’s most unusual feature – and the reason behind it misidentification – is the way it flies. It beats its wings so fast that they are no more than a blur, and like a true hummingbird they are able to hover while feeding for nectar. This is accomplished with a long uncoiled proboscis. To complete the illusion, the speed of their beating wings is such that they emit the trade mark hum from which the hummingbird gets it name. 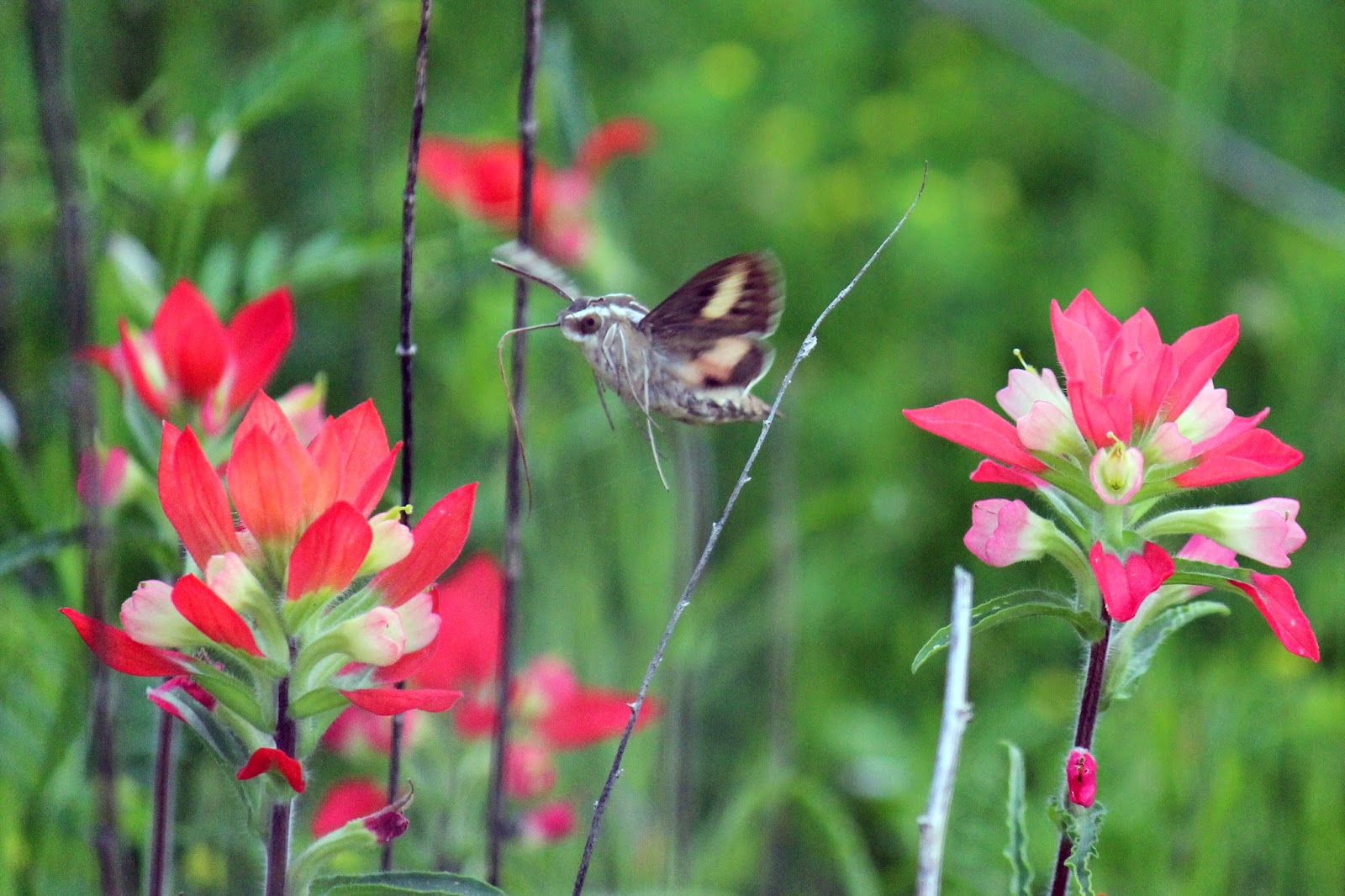 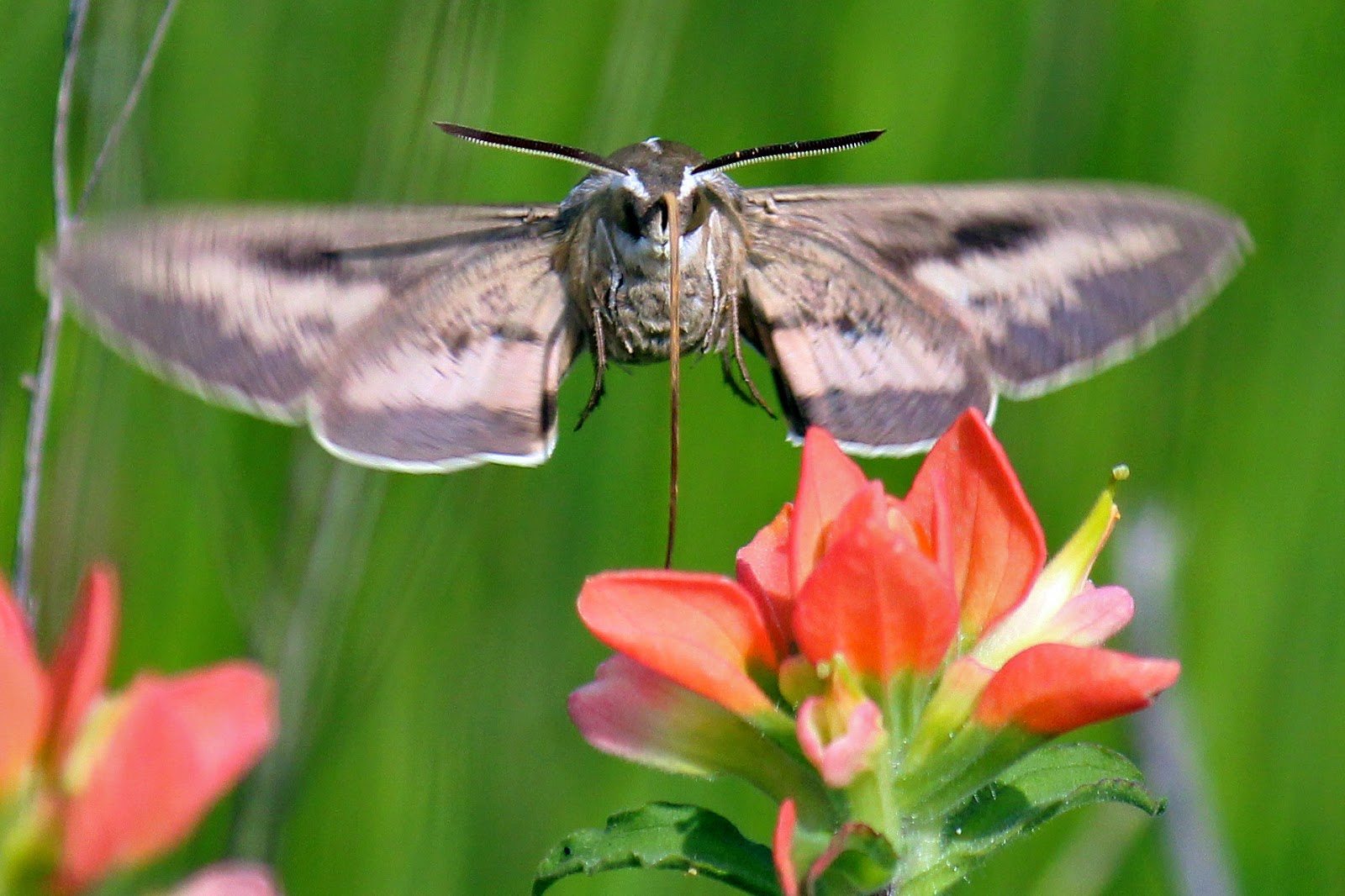