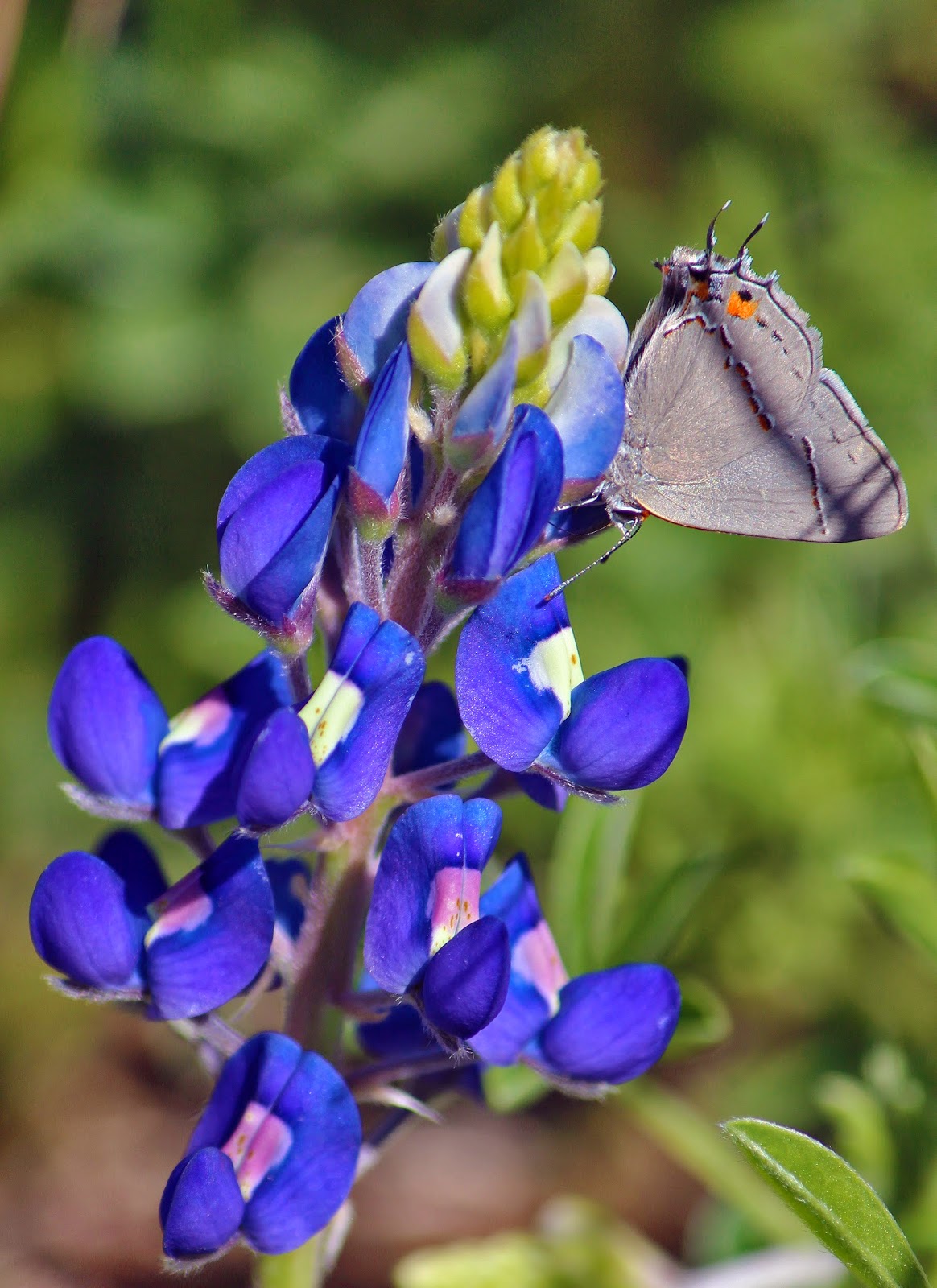 The unpaved, just off the beaten paths along the Trinity River in early spring highlight nature in the raw to those who venture into it. They are places of profound beauty and wonder that so very few ever experience. A scant handful of human signs mark the place which only offer suggestions on where to go.

It’s for a few weeks that the Great Trinity Forest hits the first peak of blooms. Most Texans are familiar with the showy roadside flowers of the interstate shoulders that bloom later in the spring. Many have not seen or even know of the earliest of blooming flowers that hit the hardwood bottoms. They are here, there are a lot of them and you are missing out if you have never seen them.

Many mislabel this area as Blackland Prairie. It is not. This is land carved upon by the ancestral Trinity, the old Ice Age river many times stronger and larger than that of today. The dramatic limestone canyons and cliffs now buried under many feet of sand and silt. The alien gravels of this time sit up to 100 feet in elevation above the present Trinity and blend a unique perspective to the landscape.

The meadow above exemplifies a sight few contemporary Texans have ever seen. A dense packed meadow of bluebonnets ringed by mature trees in an area full of Little Bluestem, Big Bluestem, Indiangrass, and Switchgrass. These are the legendary “Four Horseman of the Prairies” species of the Tall Grass Prairie. All but obliterated as an ecosystem with only small fractured pockets remaining. 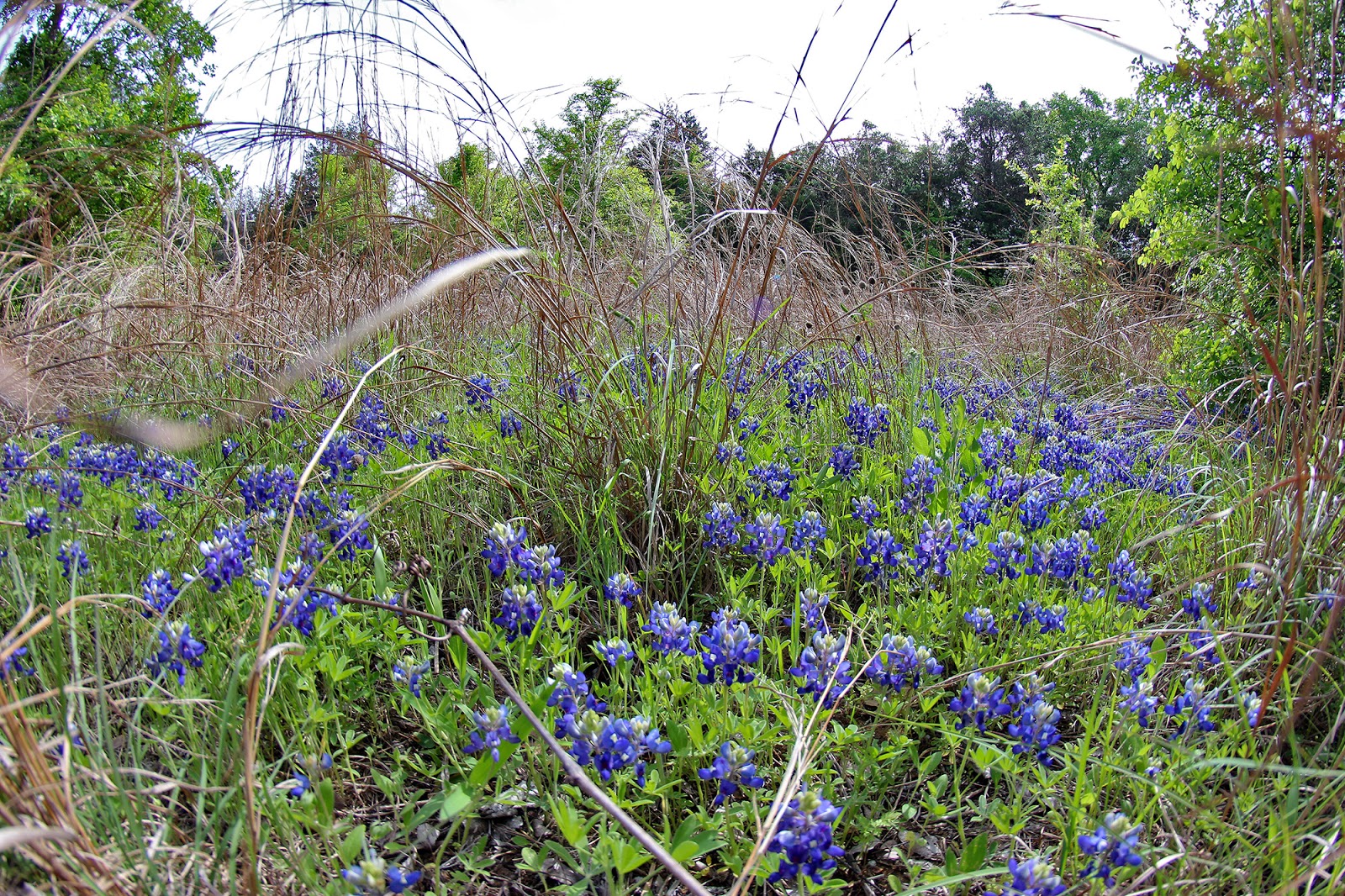 Many might think that the tall grass here spoils the view. For those in the know, nothing could be finer. The intoxicating aroma of bluebonnets, perhaps a couple hundred thousand packed into the footprint are overwhelming to sight and smell. There might have been possibly two or three other humans who ever saw that spot this spring.

Bluebonnets Blooming Under A Blood Moon

This spring’s bluebonnets peaked in bloom under the lunar cycle of a full moon in eclipse. A somewhat rare event known as a Blood Moon. The coppery red hued colors of the moon take on the appearance of blood, hence the name.

Both astronomers and followers of certain religious pastors are talking about the lunar tetrad of 2014-2015. The Lunar Tetrad is four successive total lunar eclipses, with no partial lunar eclipses in between, each of which is separated from the other by six lunar months, six full moons. Whether the lunar cycles are an omen to an upcoming rapture or end times would be anyone’s guess. Myth, legend and superstition abound about such events, the bluebonnet has such interwoven stories told about it too.

The Comanche, who lacked a written language told their tribe’s history through storytelling. One of their parables was that of the Bluebonnet:

The Texas fields are covered With a blanket of deep blue. But for a little Indian girl, This would not be true.

Texas land was buried and dry. Rains just would not come. Indians danced and prayed for rain, And beat upon their drums.

The Chief made a proclamation. He appealed to one and all. A prized possession must be sacrificed Before the rains would fall.

The Indian camp was silent, While each person searched his heart. But when it came to sacrifice, With possessions they would not part.

Suddenly a little girl stepped forth, Holding her blue-clad doll. She placed it in the roaring fire and raindrops began to fall.  The rain brought forth the grass, Among its blades, flowers of blue. To be a sign for all the time. Of a love so pure and true.

It fools many from a distance, a flower that so closely resembles a bluebonnet that some get their family flower photos taken among an invasive species rather than a native. Muscari armeniacum, commonly called grape hyacinth, is an early spring-blooming bulbous perennial that is native to southeastern Europe. It provides spectacular drifts of color when massed in open areas, around shrubs, under trees. Each flower has a thin white line around the rim. Dense inflorescence purportedly resembles an elongated, upside-down bunch of grapes, hence the common name.

At about the same time that bluebonnets make their annual run, the hyacinth do the same. It is thought that the grape hyacinth at McCommas Bluff was probably planted near an old rendering plant structure and allowed to spread. 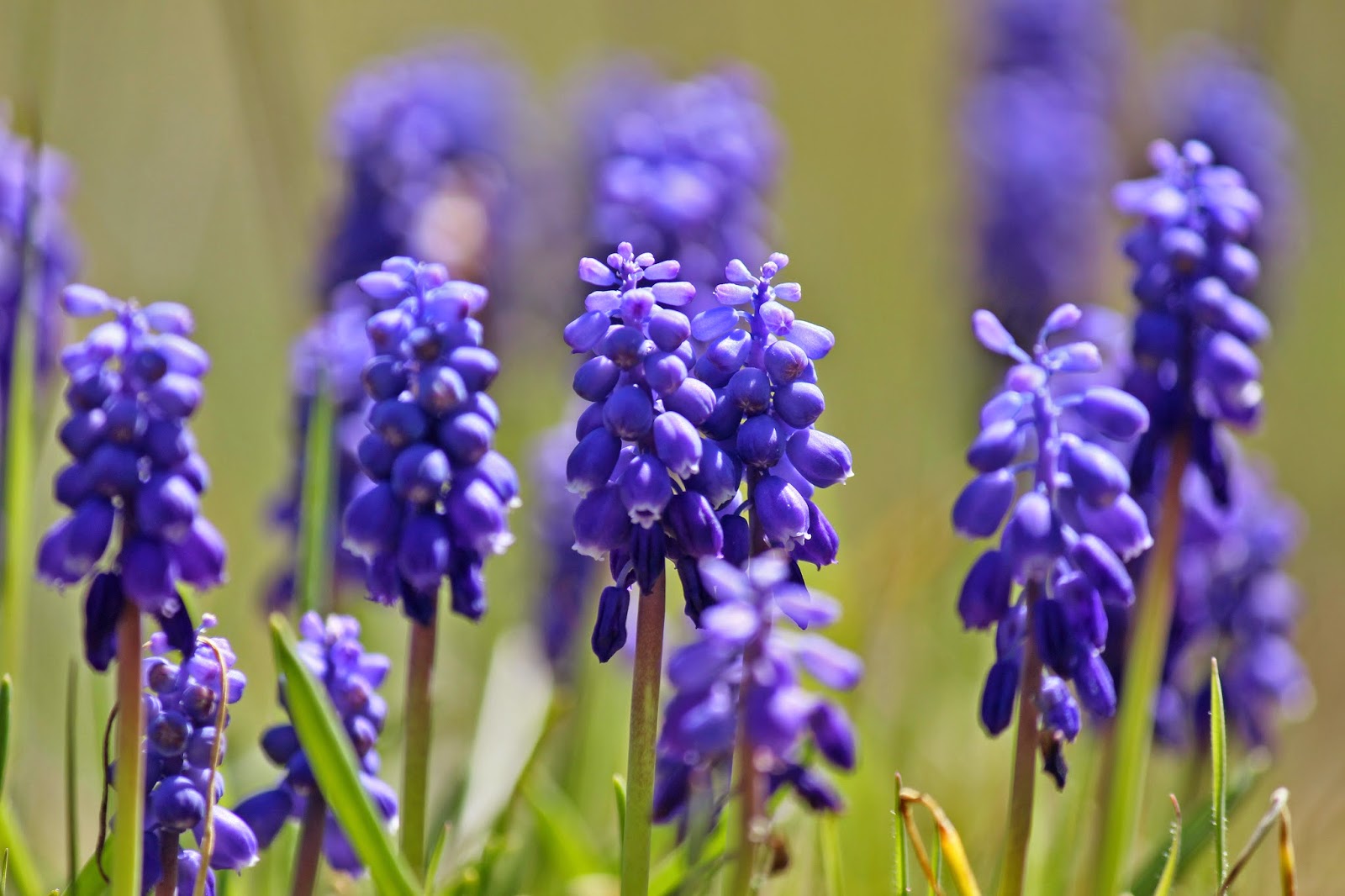 Walking through the fields here and brushing through the stands of the flowers one can pick up a decidedly grape kool-aid smell to the crushed flowers.

Nowhere is the smell more evident, than being downwind of a feral pig sounder that is grazing the grape hyacinth. Above, and in the video below, a feral pig sounder, twenty strong works over the flowers just photographed minutes before.  The strong wind and thick privet hedgerows let me go unnoticed to the pigs who were preoccupied with eating the sickly sweet flowers.

Feral pigs are responsible for huge amounts of damage in the Great Trinity Forest. They root around the bases of many trees, tear out riparian plants along streams and are vectors for a host of diseases that enter the watershed. They are quite easy to find in the spring of 2014 here.

The highly fragrant blossoms of the Mexican Plum appear in the earliest of spring days, before the leaves, and attract hordes of pollinators like butterflies and bees.  The tree often grows solitary in clearings and woodland edges in the eastern half of Texas. It tolerates dappled shade as well as full sun. Despite the name it is said to actually be more common in Texas than in Mexico. 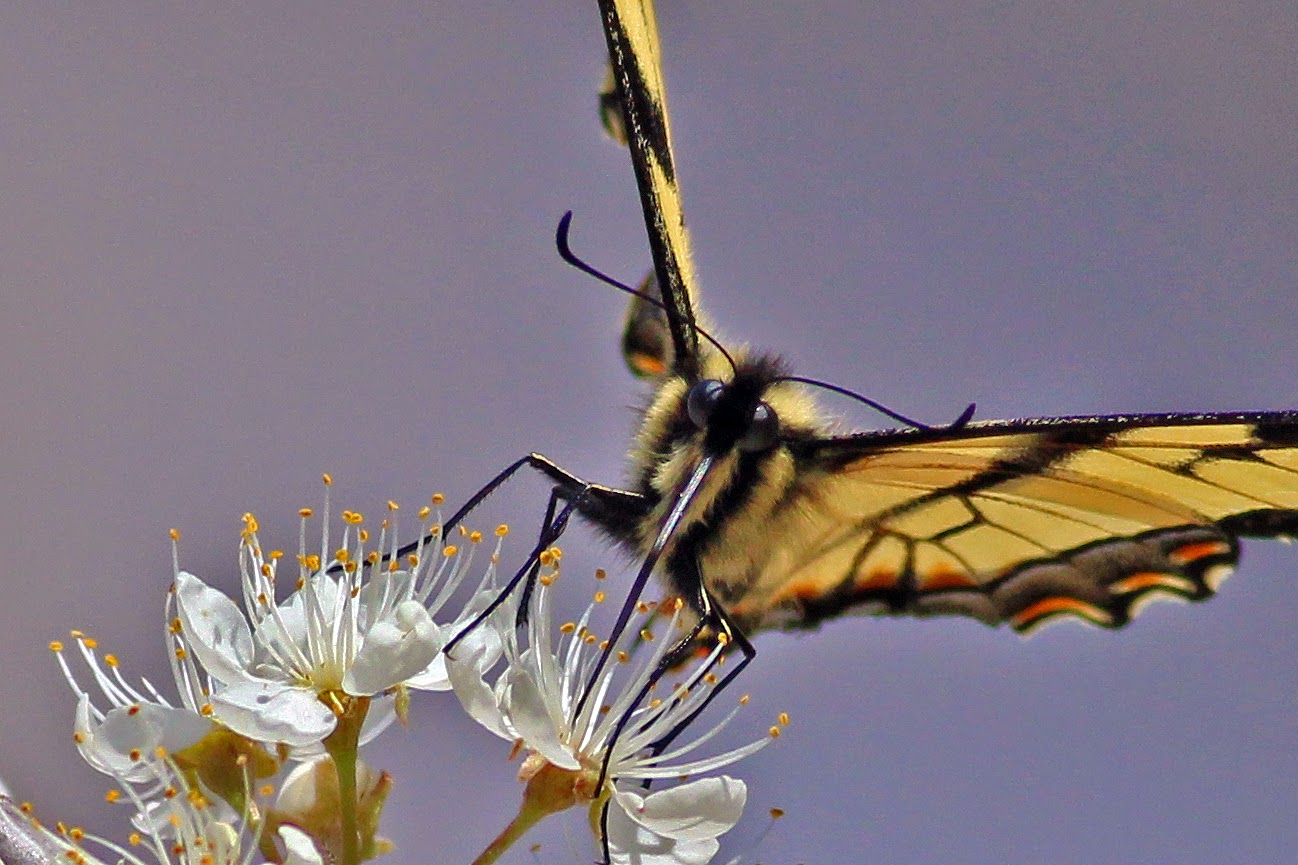 That plum tree sits right on the edge of some rather remarkable upland areas that rise directly above the Trinity River forming the hidden backbone of McCommas Bluff.

The pink Mexican Buckeyes flourish here too with a great number commanding the steep slopes of the sandy soiled  partially exposed limestone. The late hard freezes of spring this year killed many of their blooms making for a lackluster display.

Exploring the Bluebonnets at McCommas Bluff

The isolation and simplicity of McCommas Bluff while well within the city limits takes you far out into the wild with some unique ecosystems overlapping each other in the span of a single river mile. In the 1980s and 1990s as Dallas and Fort Worth raced to fill the gap between the two cities as one, southeast Dallas was left out of the picture.

It is such a rare treat to hike around with Master Naturalist Jim Flood and Canoe Guide Charles Allen. It was a brief sunset jaunt through the woods of the porous Trinity Sands overlying Austin Chalk. Where the native post oak savannah is peppered with hickory, buckeyes, pecan and many species of oak.

Among Texas spiders, Jumping Spiders may be the easiest to recognize.  Jumping spiders have a very distinctive, flat-faced, big-eyed appearance that is difficult to confuse with other kinds of spiders.  They also have a unique, stalking way of moving.  Most are small and hairy.  Like all spiders, jumping spiders have 8 legs, 2 body parts, and no antennae.  Eight eyes are present on jumping spiders, although 1 pair is often so small that it appears as though there are only 6 eyes.  One pair of eyes is always very large and directed forward, almost like human eyes.

Not even paying attention to the camera or the bluebonnets, Jim and Charles are taking census of the native yucca that populate the top of McCommas Bluff. 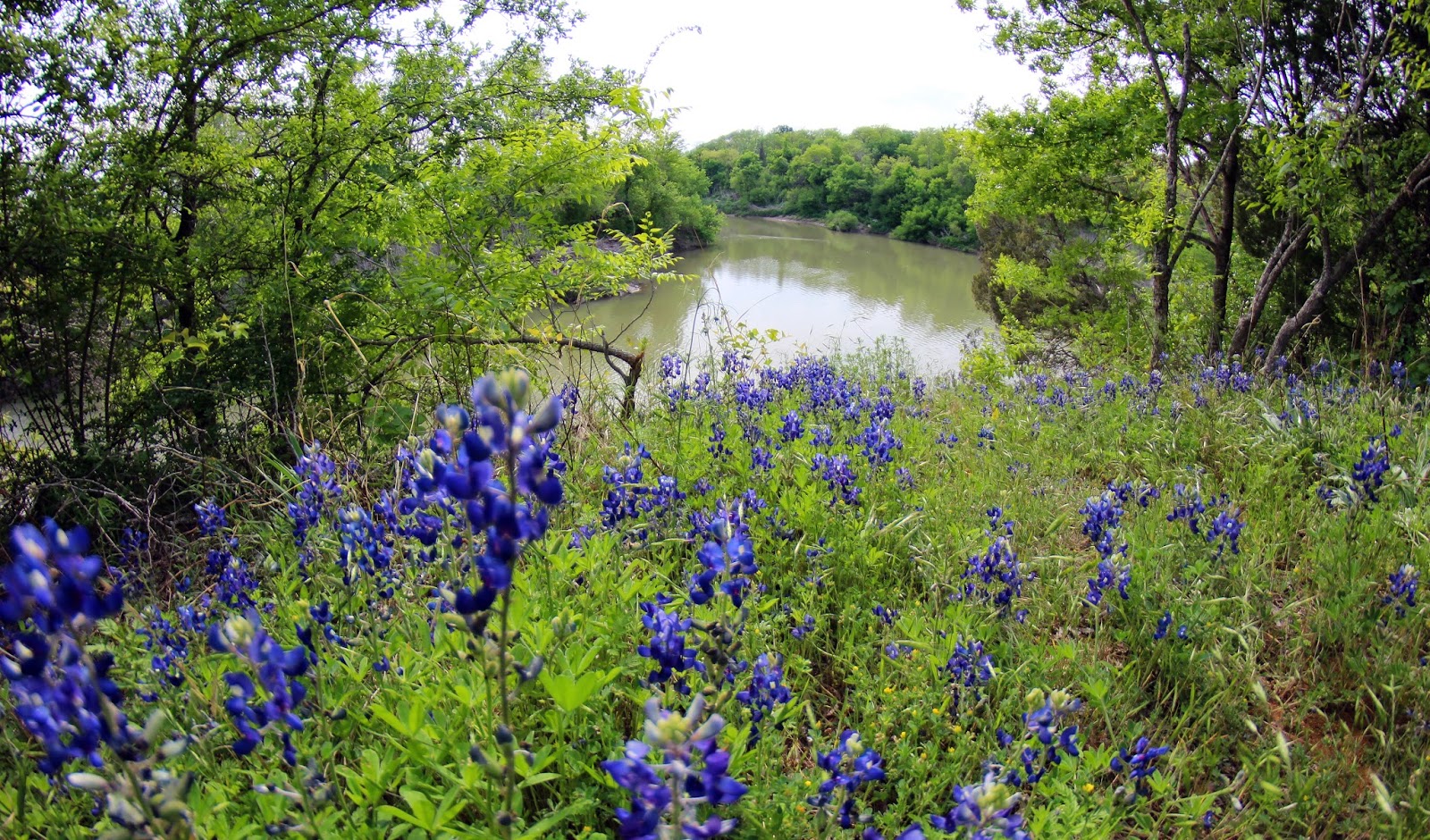 Pollen Gatherers Of The Bluebonnets 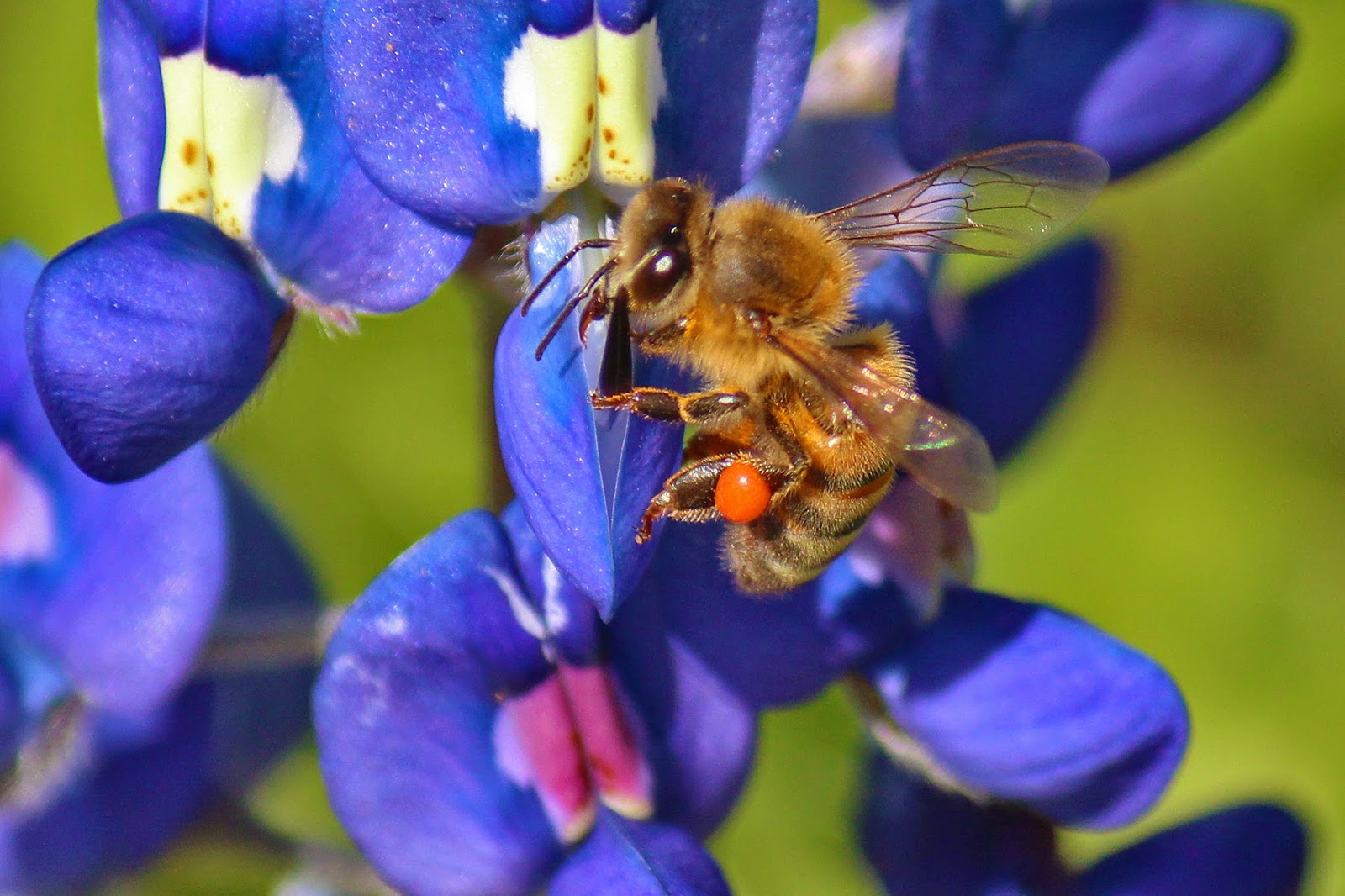 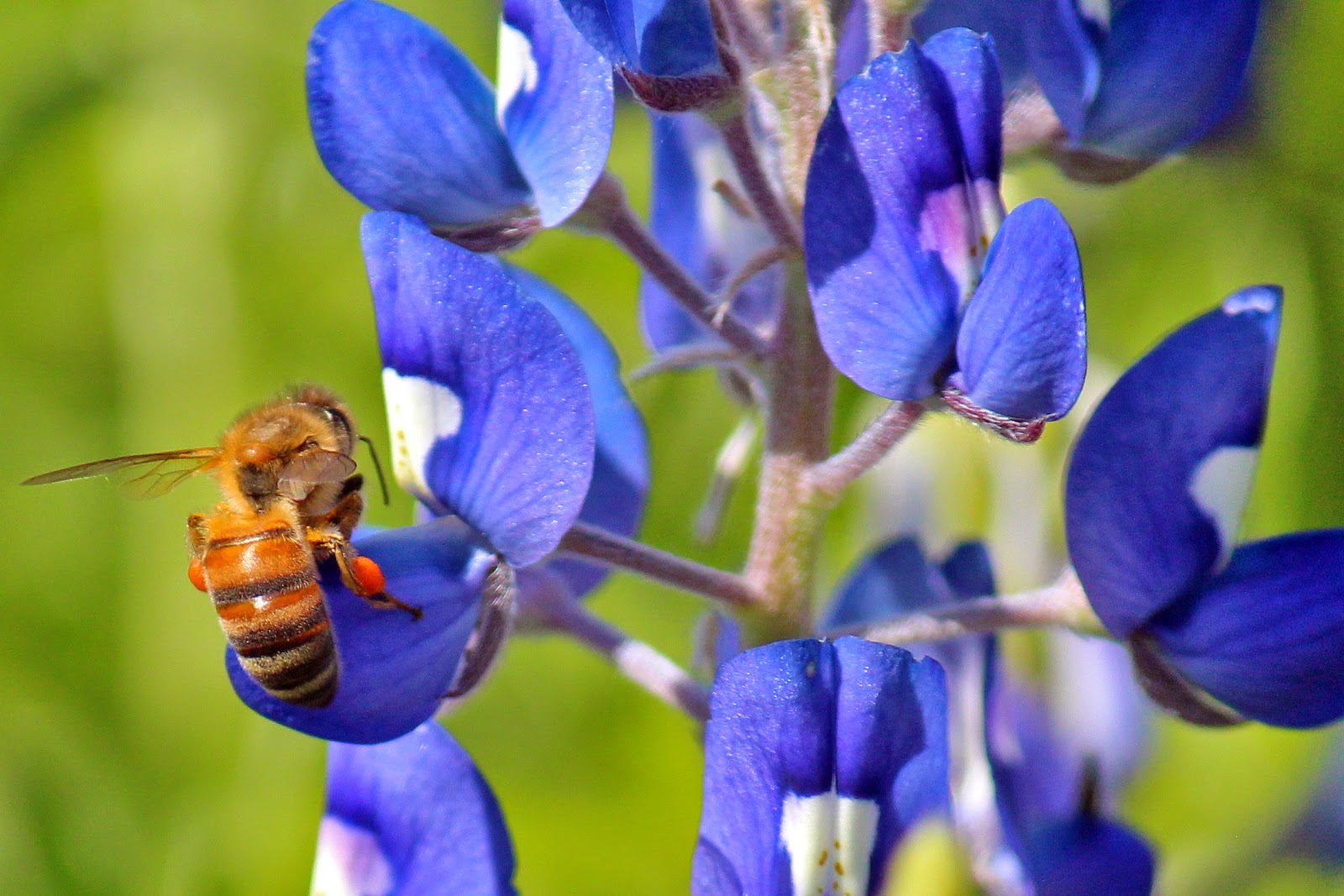 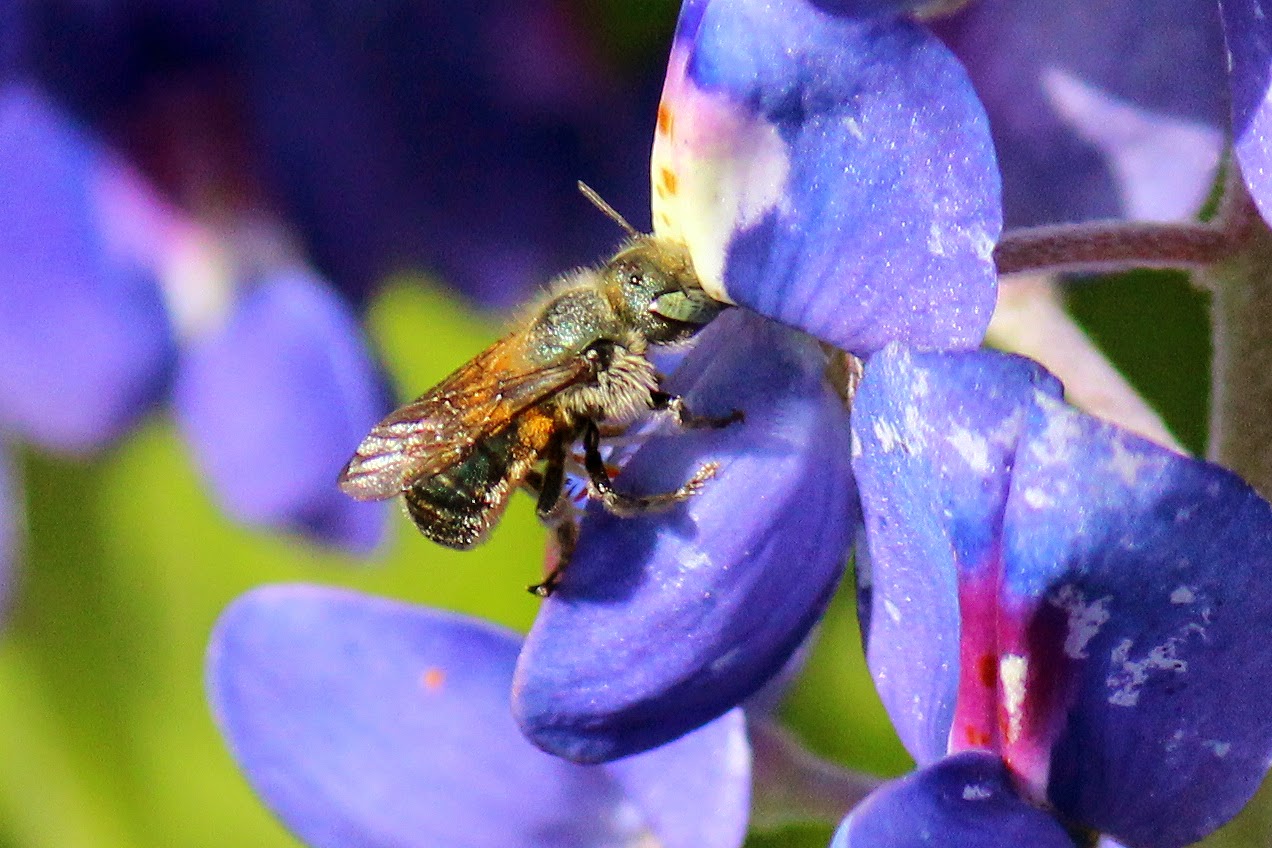 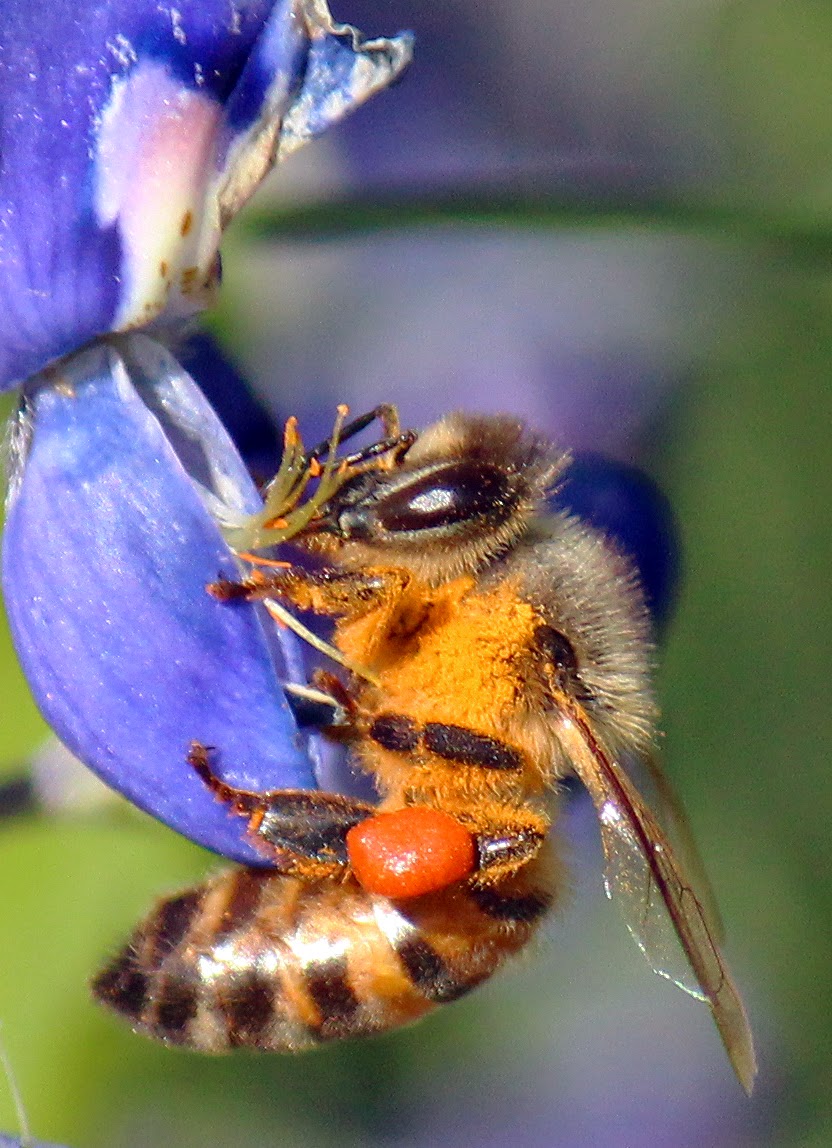 Pollen from fresh white-spotted flowers has a sticky feel too it and easier to cling to the body of a bee. As the pollen ages, it is less sticky and gets powdery. This in turn darkens the color of the flower to a reddish purple hue. That color indicator is a pretty good indicator for the bees. 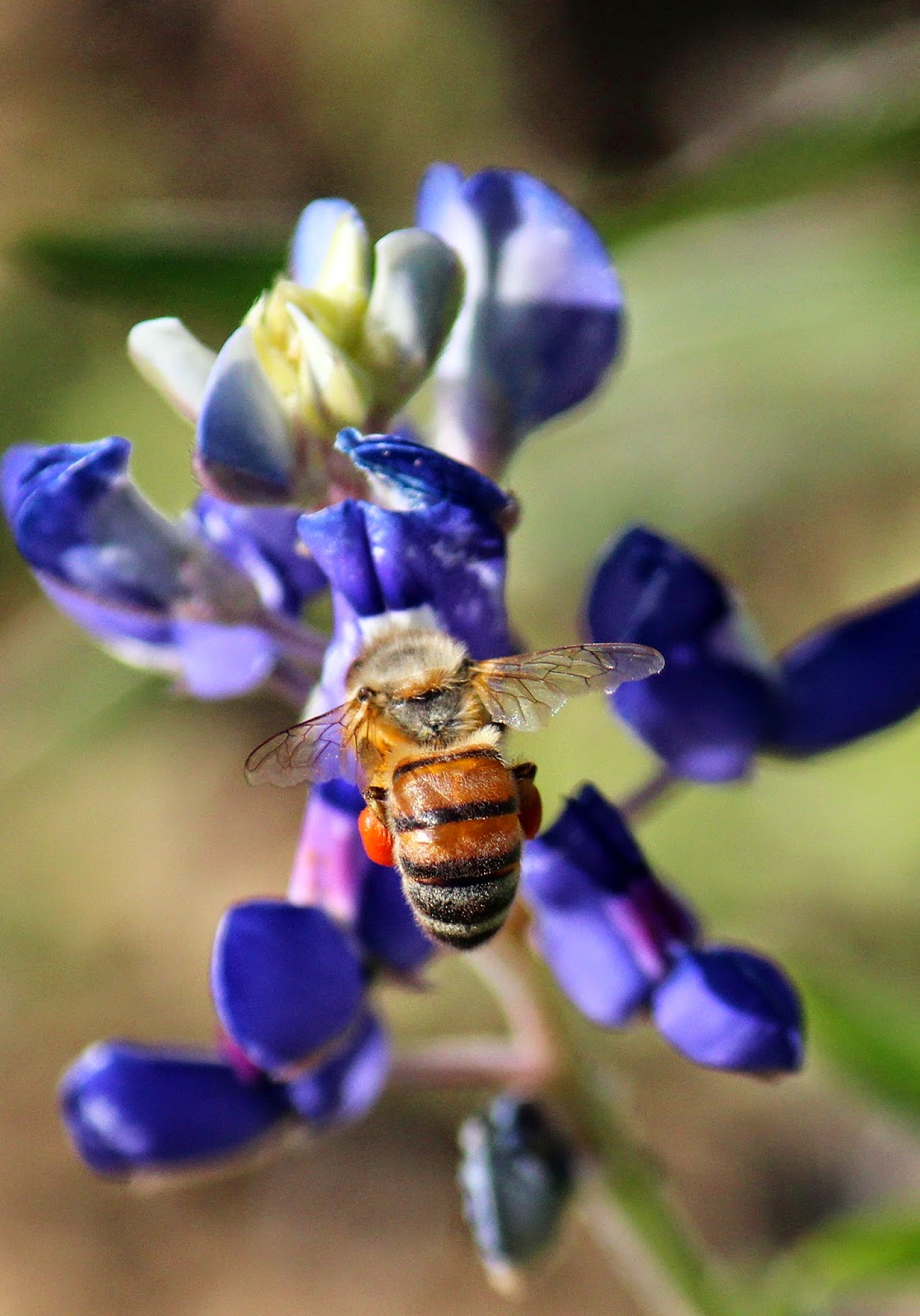 This marker seems to help the bee because it can be a more efficient pollen gatherer–and it is good for the bluebonnet because the white spot directs bees to flowers with good, fertile pollen and the transfer of this pollen is likely to result in successful cross-pollination for the bluebonnet. Some think that that the purple spot is the result of pollination. Flowers with white spots are not yet pollinated while those with purple spots are already pollinated. 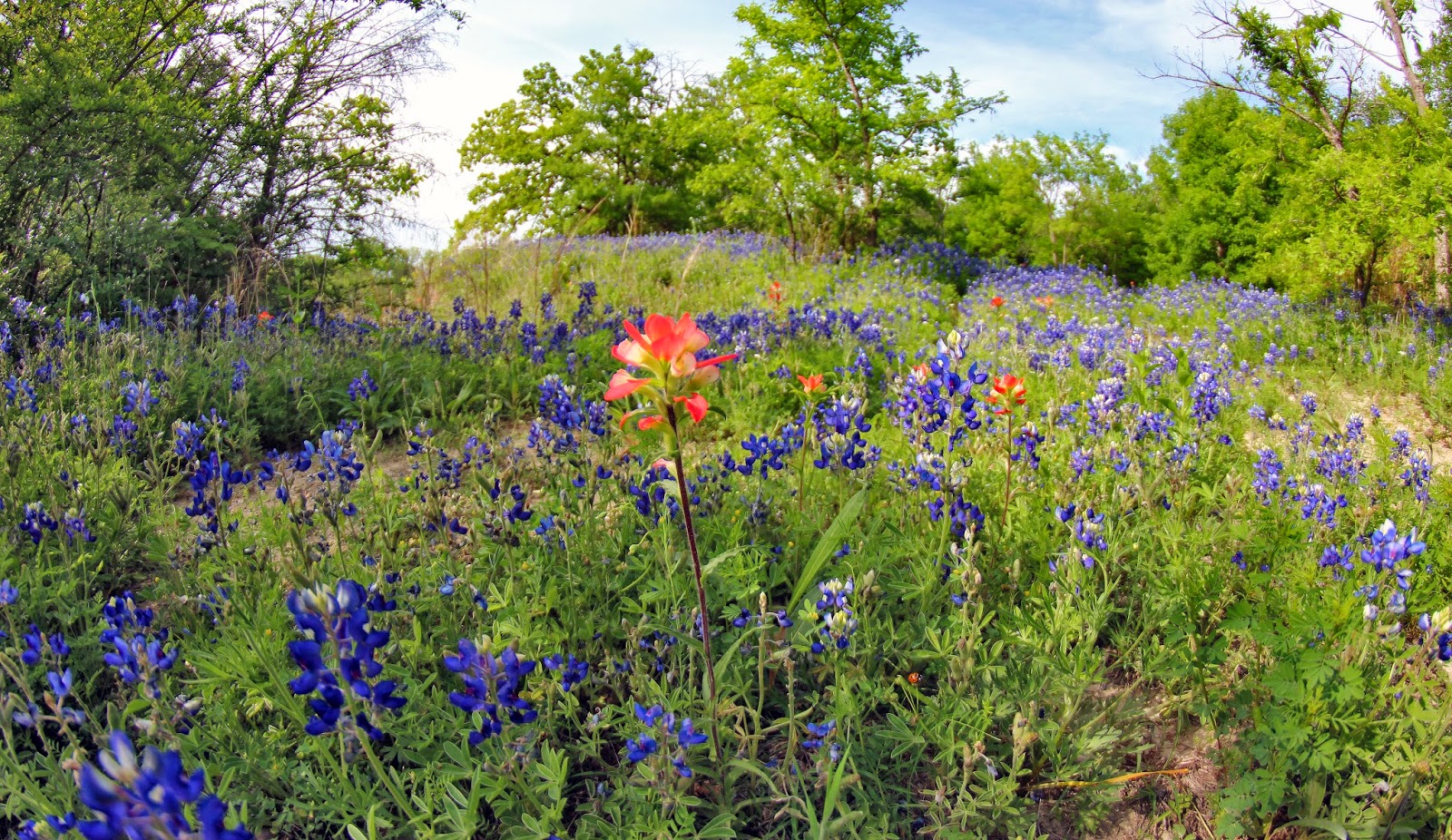 In North Texas along the Trinity and the smaller tributaries that feed the river, small meadows and unblemished vistas can still be found in the wildscape. The chalk uplands here are not unlike those of other rivers, the Brazos, Navasota, Colorado. While those river basins mentioned are famous for their spring wildflowers, the Trinity is not. It should be.