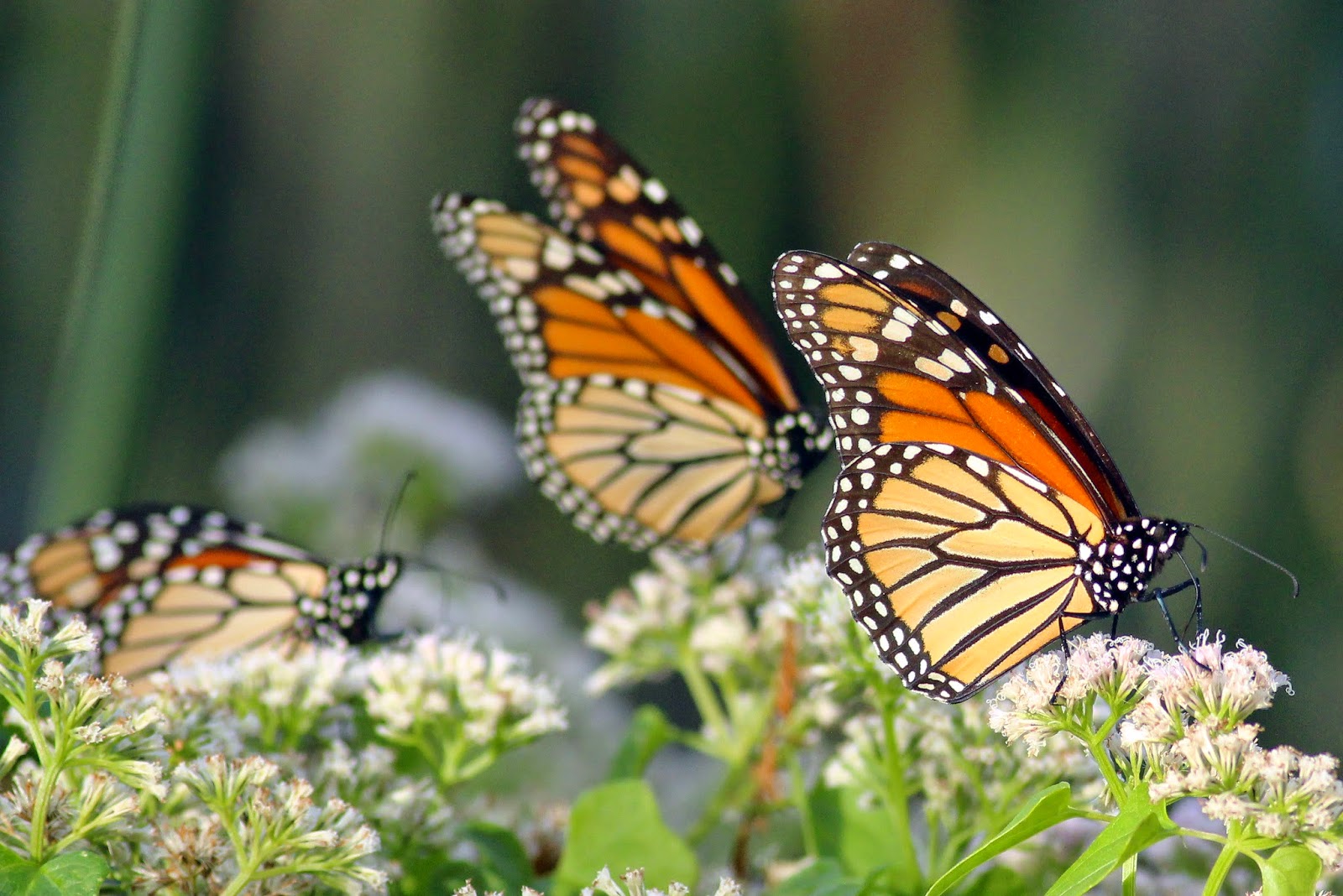 The migration of the tired and wary, those seeking refuge from the hostile world around them has always been a signature hallmark of the clear and clean waters of Big Spring. Man and beast alike. A shelter from the storms brewing in the outside world.

The Native Americans drank from the cold water here leaving their stone tools and weapons behind as evidence. The original European stock pioneers from the earliest dawning days of the Republic of Texas called it home. On this particular evening in October 2014 the guests are the migrating Monarchs of North America. A sight fewer and fewer see in Texas as the Monarch population dwindles and their habitat disappears.

As the sun sets in the cooling autumn air of the Great Trinity Forest, migrating Monarch butterflies begin to seek out a suitable roost for the night. Their instinctive migration route, ingrained by tens of thousands of generations of previous monarchs lands them in the sheltering arms of Big Spring and the bows of the Historic Bur Oak and nearby nut bearing pecans and walnuts.

Monarchs and other butterfly species only travel during the day and need to find a roost at night. Monarchs gather close together during the cool autumn evenings for safety in numbers. These roost sites are important to the monarch migration. Many of these locations despite the fact that the butterflies have never seen the site are used year after year. Often densely spaced oaks and cedar trees are chosen for roosting. These trees have thick canopies that moderate the temperature and humidity at the roost site. As dawn breaks the next day, monarchs bask in the sunlight to warm themselves before taking flight. 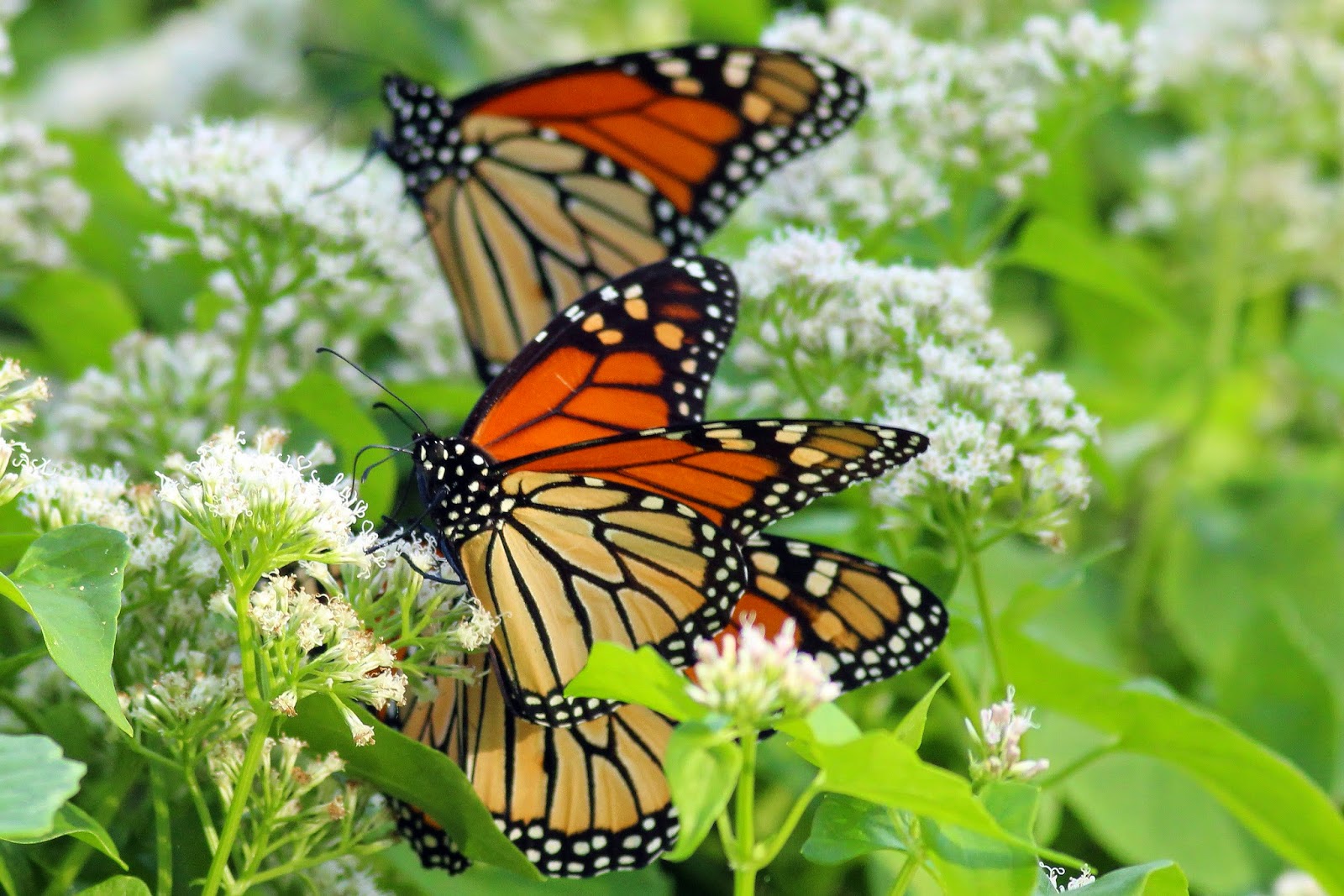 In all the world, no butterflies migrate like the Monarch butterflies of North America. They travel much farther than all other tropical butterflies, up to four thousand miles. They are the only butterfly species to make such a long, two way migration every year. Amazingly, they fly in masses to the same winter roosts, often to the exact same trees. 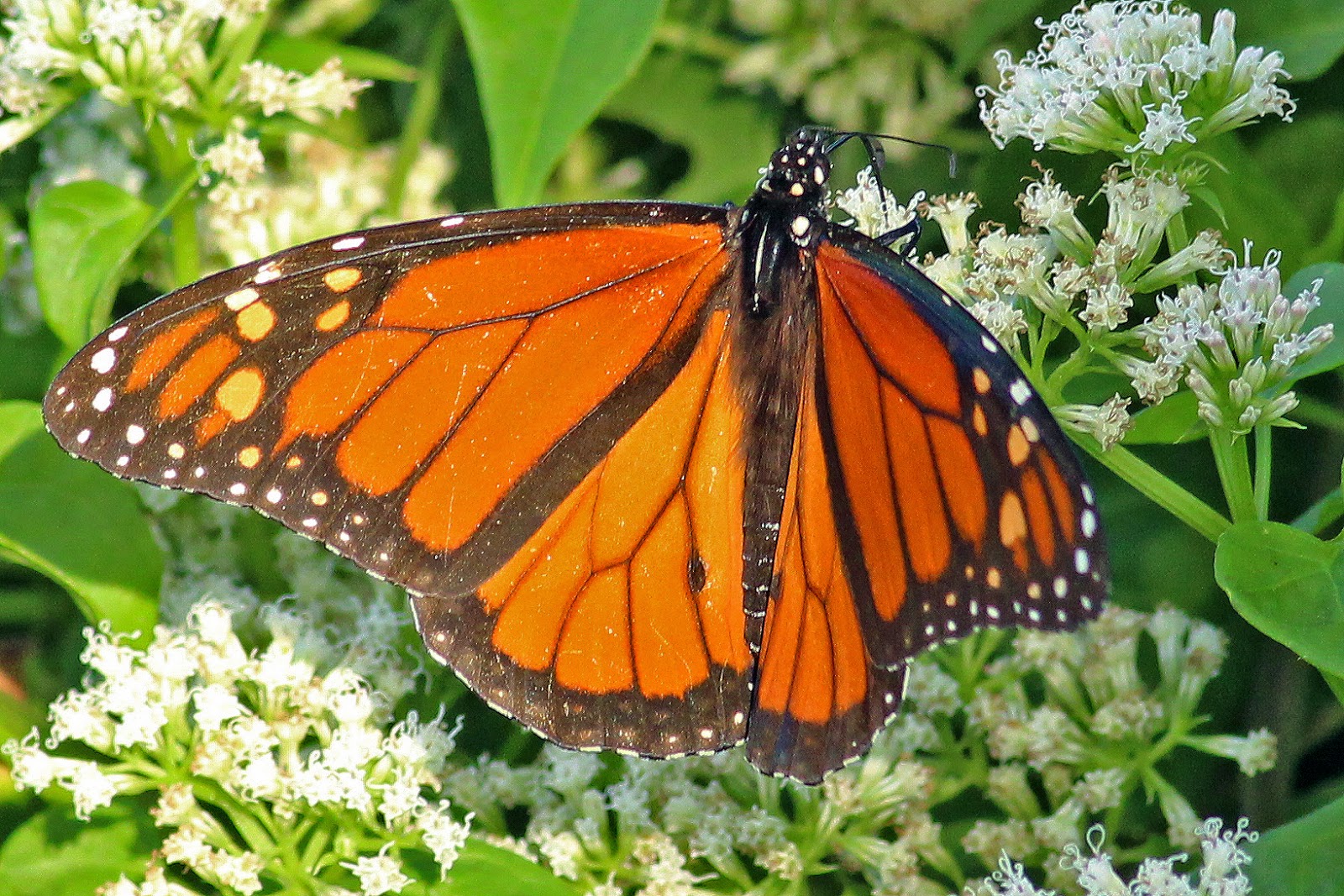 The annual Monarch migration is more the type we expect from birds or whales. However, unlike birds and whales, individuals only make the round-trip once. It is their children’s grandchildren that return south the following fall. The Monarchs are the only butterfly that migrates both north and south as the birds do regularly, but no individual makes the entire round trip, because the migration period spans the life of three to four generations of the butterfly.

The Monarch butterfly Danaus plexippus is perhaps the best known of all North American butterflies. It is easily recognizable by its bright orange-red wings, with black veins and white spots along the edges. The Monarch butterfly is famous for its southward migration from Canada to Mexico and the northward return back through the Great Plains to Canada in summer. Every fall, millions of these butterflies fly west to their wintering grounds in California and Mexico, covering the trees there with their bright shimmering wings.

Their brilliant coloration is mostly for protection from predators like bats who might not see the bright orange and black coloration, the tell tale of the bad-tasting and poisonous Monarch. From the trees beyond the night crew of animals start up their evening calls. Ready to hunt under a rising crescent moon. 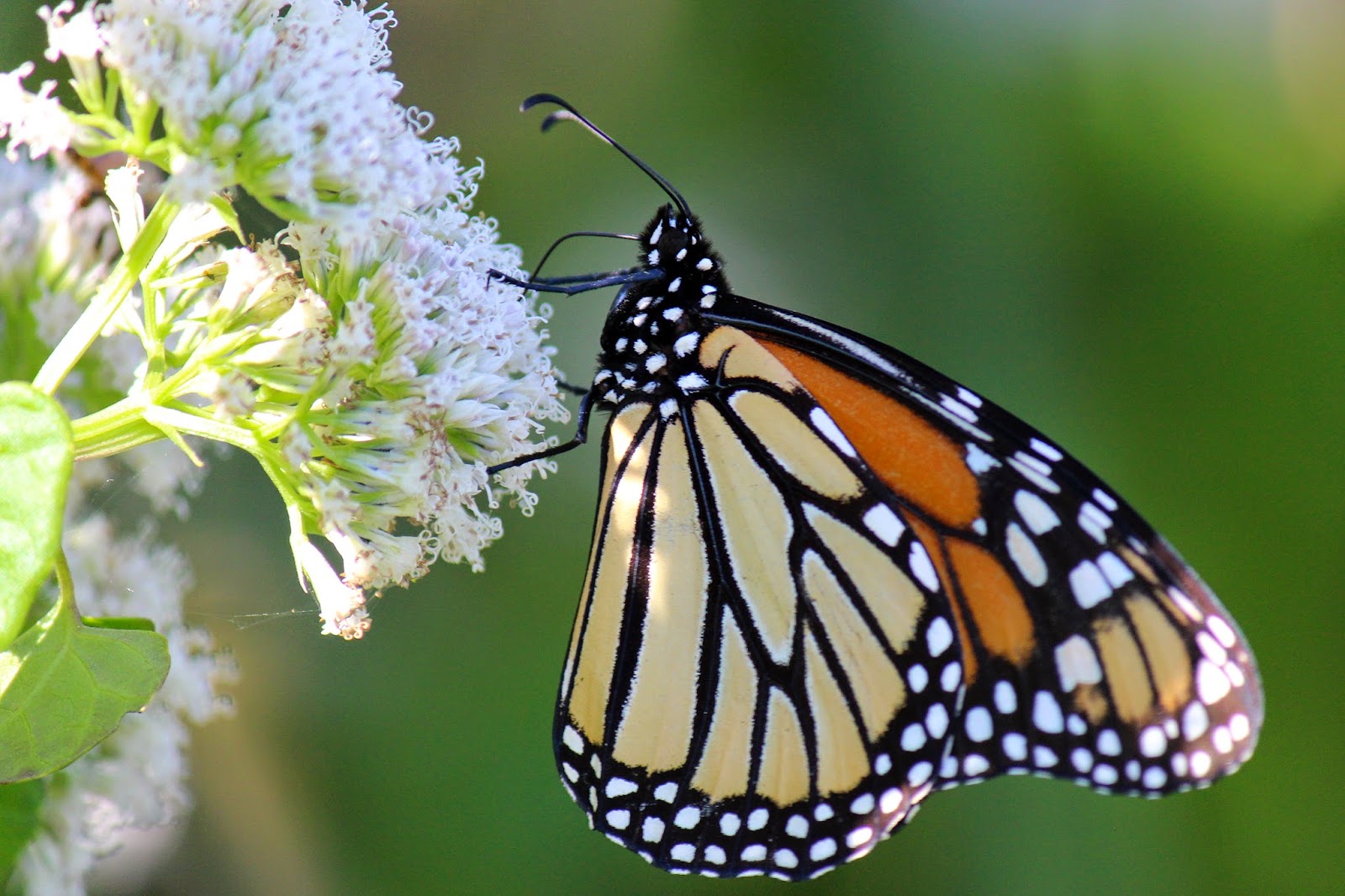 Nectar corridors are a series of habitat patches containing plants that flower at the appropriate times during the spring and fall migrations. These patches provide stopping-off points for the migrating butterflies to refuel and continue their journey. Having these islands of nectar sources is particularly important within large areas of urban and agricultural development. The discontinuous patches of nectar sources are “corridors” that monarchs will follow, like stepping-stones across a stream to complete their migration. 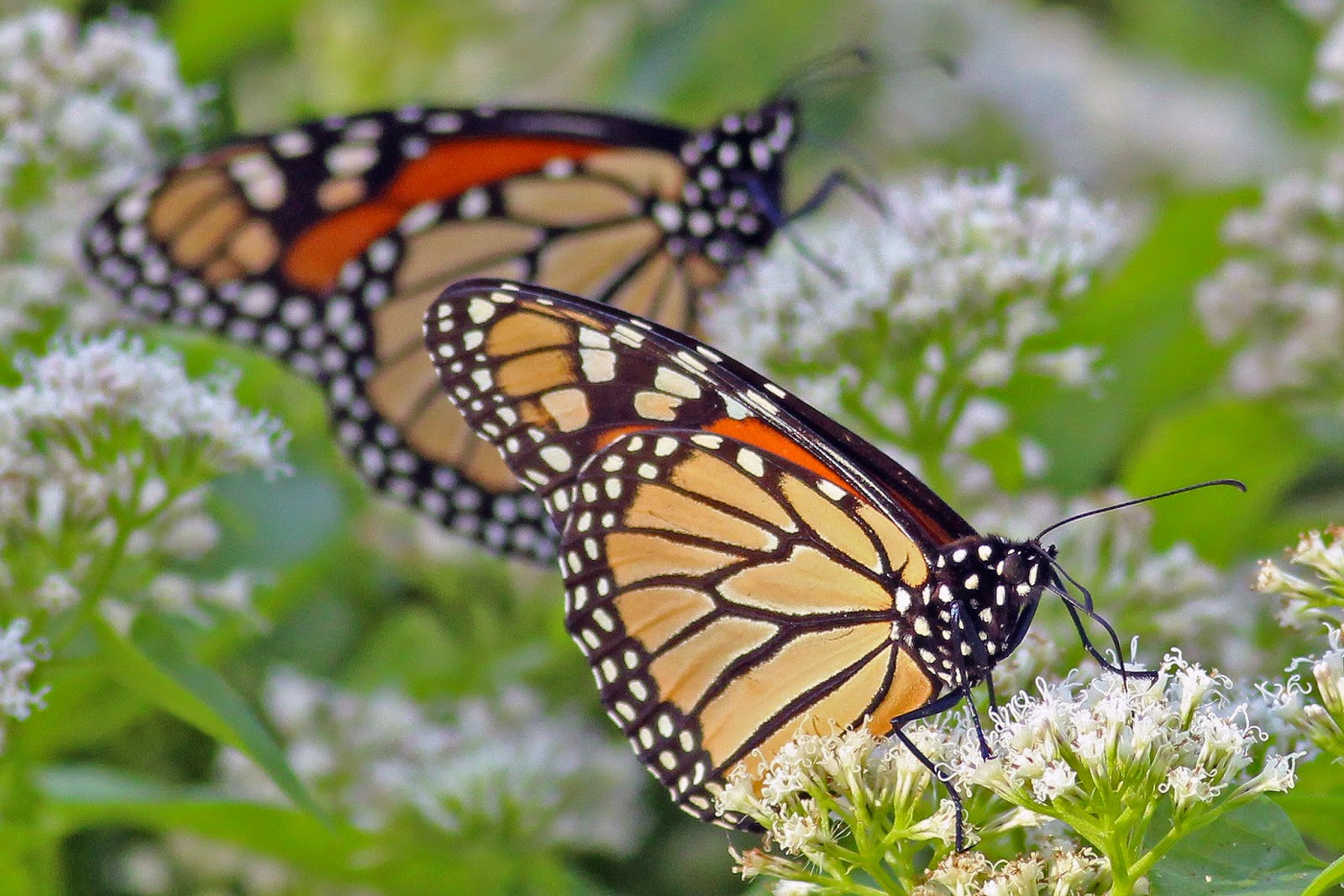 The Monarchs seen here are consuming nectar from a blooming shrub in the outfall area of Big Spring where water courses down in a gentle meander towards Bryan’s Slough. It is believed that the Monarchs might be following what biologists call a “nectar corridor” for food. Unknown how the butterflies can find these spots year after year since dozens of generations of butterflies lived, bred and died in the year previous to their last visit. 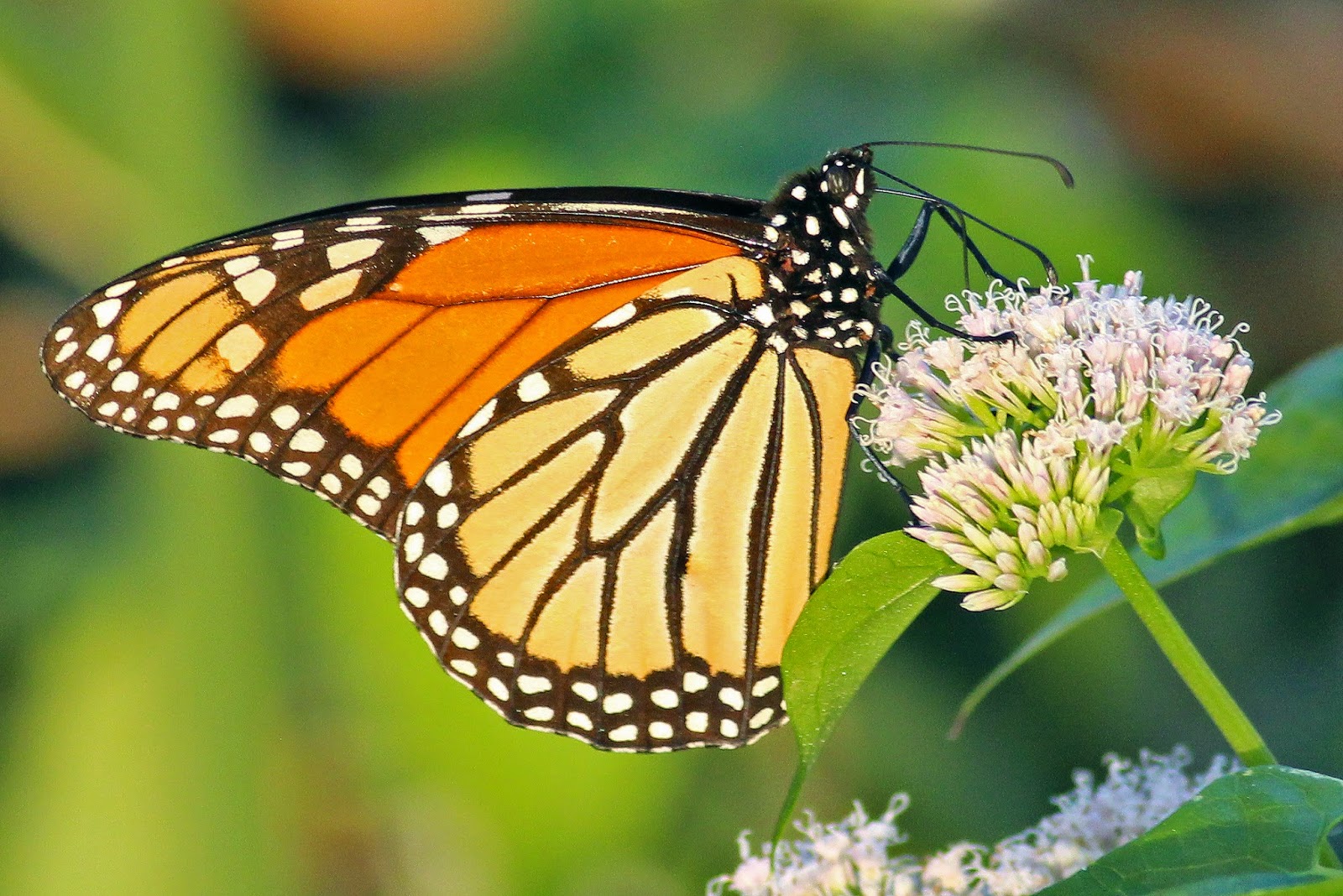 Many butterflies have a single plant required as a food source for their larval form called a host plant. Milkweed is the host plant for the monarch butterfly. Without milkweed, the larva would not be able to develop into a butterfly.

The larvae and the butterflies retain poisonous glycosides from their larval host plant, the milkweed, so they become distasteful to potential predators. These milkweed butterflies (Monarch, Queen, Soldier) eat only milkweeds as larvae. This highly effective defense strategy shields them against almost all predators that soon learn to avoid these species after attempting to eat them. 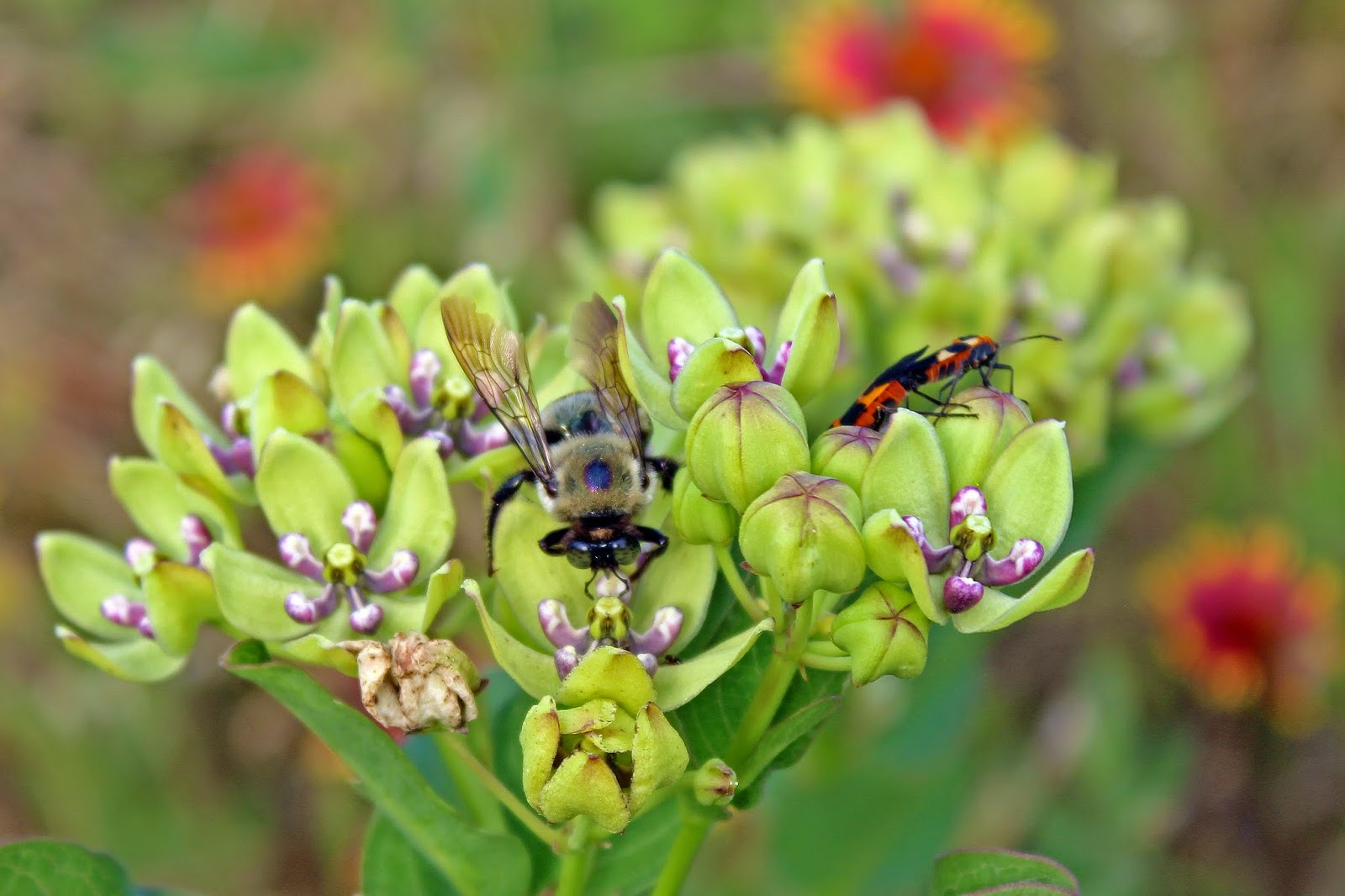 North Texans can attract Monarchs to their backyards by planting milkweed as a host for Monarch eggs and larvae. Easy to grow here in Dallas and available as seed or plantings at local native plant sale events.

The Marathon Generation, the special migrators of the Monarch species 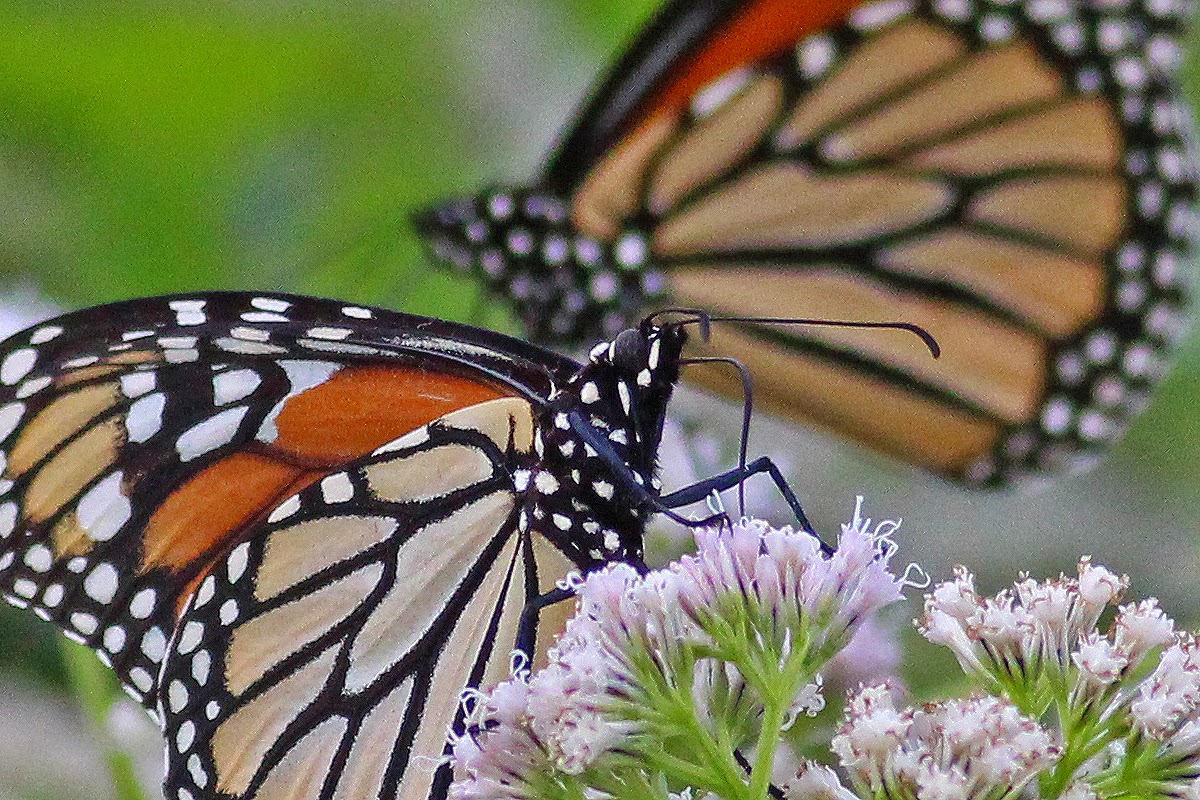 As fall approaches non-reproductive monarchs are born. These are the butterflies that will migrate south. They will not reproduce until the following spring in 2015. These late summer monarchs will travel hundreds and even thousands of miles to their winter grounds in Mexico and California. 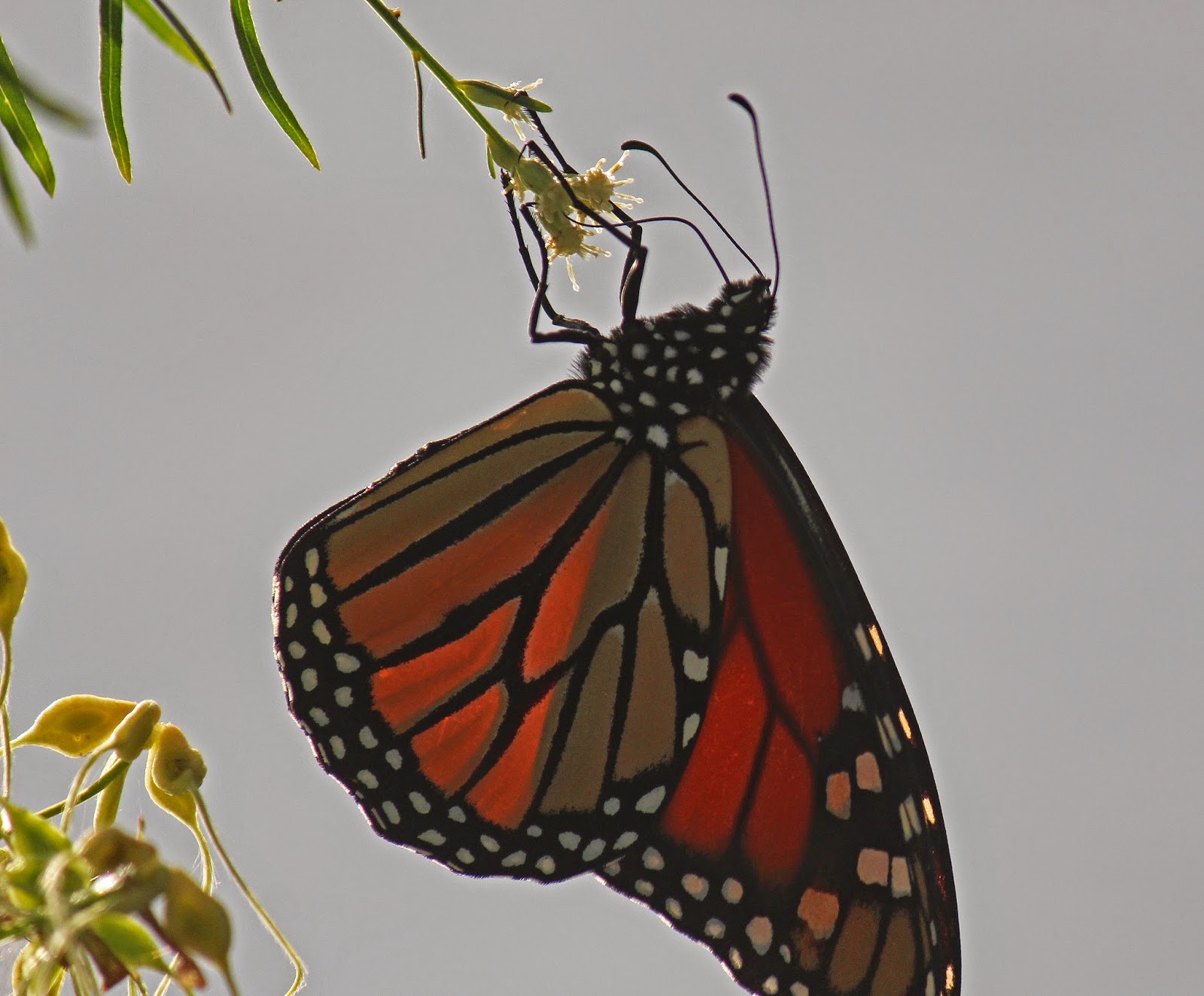 They store fat in their abdomens that will help them make the long trip south and will help them survive the winter. During their five months in Mexico from November to May, monarchs remain mostly inactive. They will remain perfectly still hour-after-hour and day-after-day. They live off of the stored fat they gained during their fall migration. 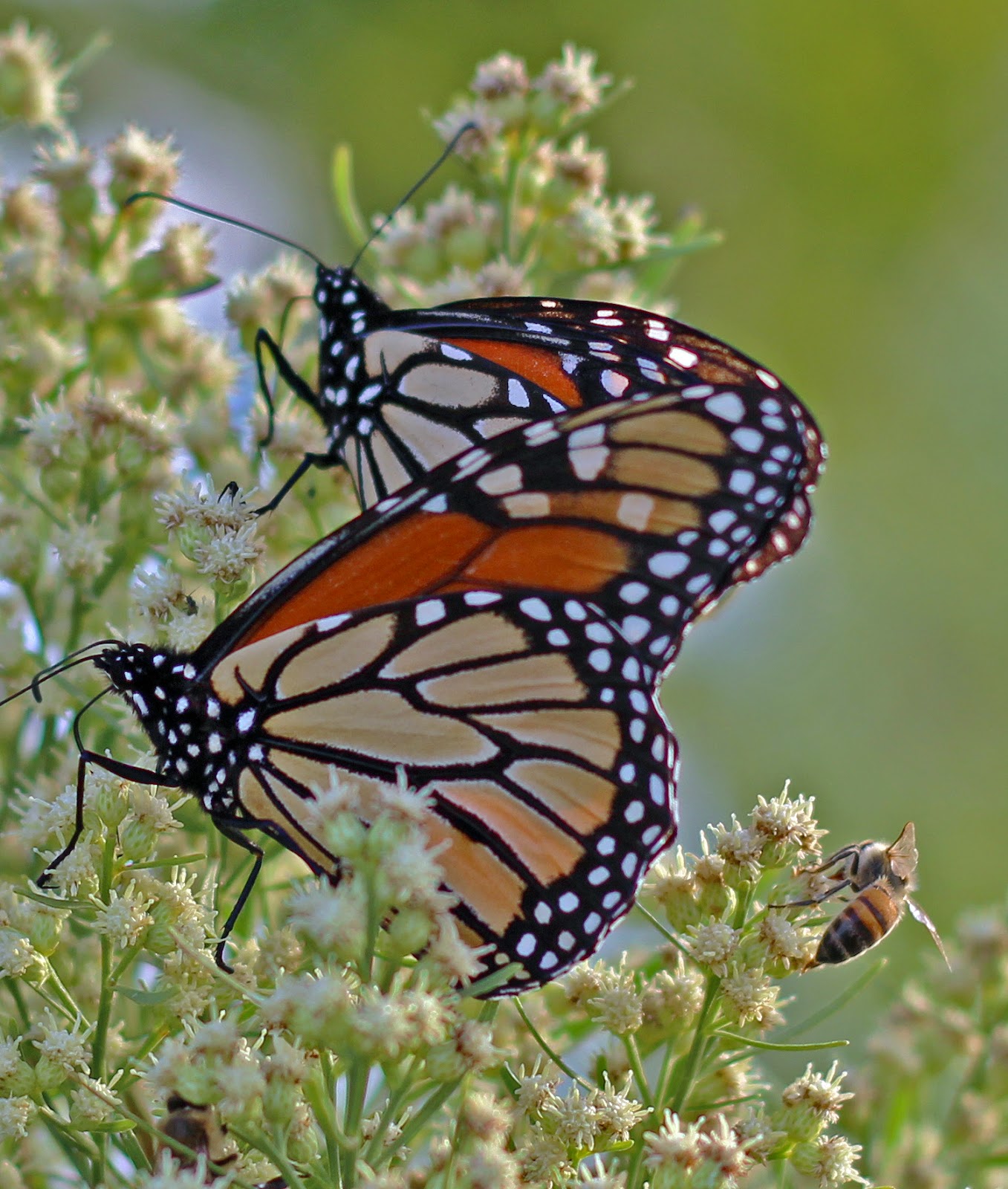 The plant they are feeding from in the photo above is known as Roosevelt Willow or Roosevelt Weed Baccharis neglecta . It’s a tall shrub with many willow-like branches covered with very dark green, linear leaves. After warm rains in late summer it produces a profusion of creamy white flower clusters which are followed by silvery plumed seeds that cover the plant with a white cloud. It grows from North Carolina to Arizona, and throughout Texas. Roosevelt Willow/Weed is one of the first plants to invade abandoned fields, roadsides and disturbed habitats. It is extremely drought tolerant, accepting wet or dry sites, and can grow in soils high in salt. The historical references of its common names purportedly come from the fact that after the great Dust Bowl, it was planted as a fast and easy way to revegetate the severely damaged soil.

The Monarch migration usually starts around October each year, but can start earlier if the weather turns cold sooner. They travel between 1,500 and 3,800 miles or more from Canada to central Mexican forests where the climate is warm. If the monarch lives in the Eastern states, usually east of the Rocky Mountains, it will migrate to Mexico and hibernate in Oyamel fir trees. If the monarch butterfly lives west of the Rocky Mountains, it will hibernate in and around Pacific Grove, California in eucalyptus trees. 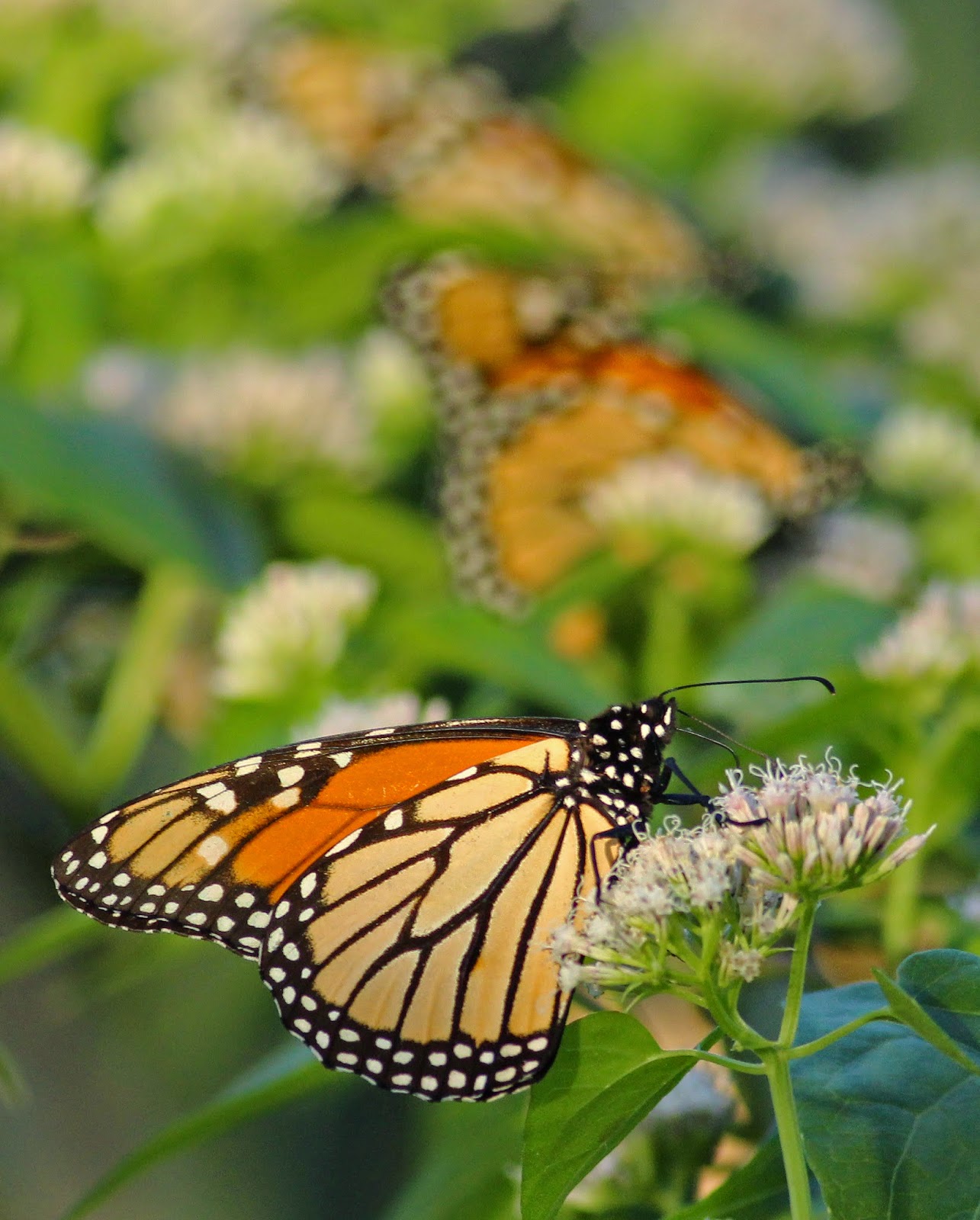 Monarch butterflies use the very same trees each and every year when they migrate, which seems odd because they aren’t the same butterflies that were there last year.  How the species manages to return to the same overwintering spots over a gap of several generations is still a subject of research. Some believe the flight pattern is inherited. Other researches indicate the butterflies navigate using a combination of the position of the sun in the sky and the earth’s magnetic field for orientation. 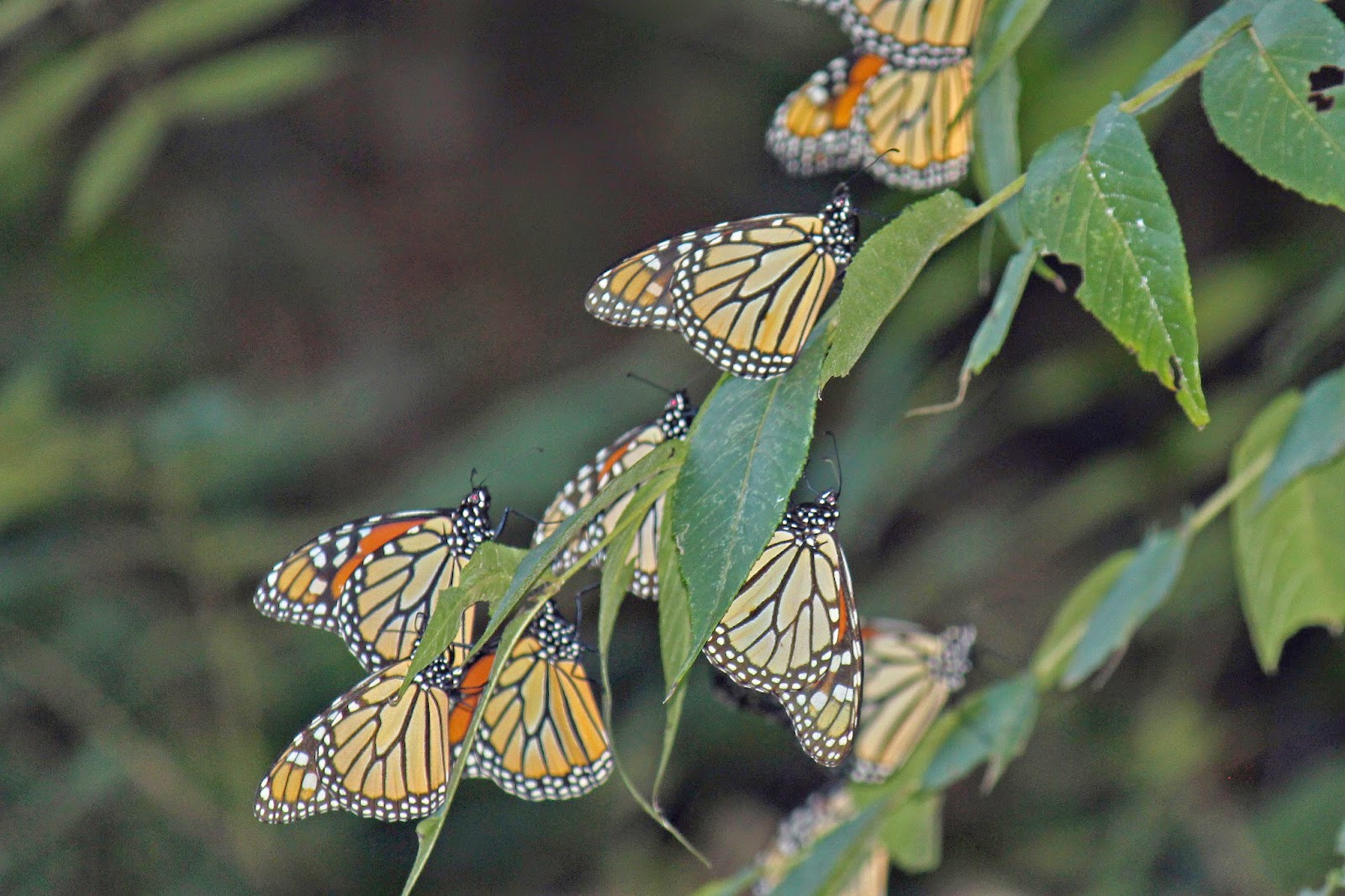 The Monarch butterflies migrating through Texas all seem to focus and funnel into a 50 mile gap between Del Rio and Eagle Pass along the US-Mexico Border. Here they have a clear route through mountain passes to the Mexican Interior and highlands.

When they first arrive at their winter locations in November monarchs gather into clusters in the trees. These butterflies congregate into colonies, clustering onto pine and evergreen trees. In many cases, they are so thick that the trees turn orange in color and branches sag from the weight. It’s a remarkable sight that attracts scores of tourists.

Saving The Future Of Texas Monarchs

The race is on to save what native Texas plant species can be salvaged from current surface mining activities at the Texas Horse Park. The local chapter of North Texas Master Naturalists has been flagging and removing scores of milkweed plants from this area with the hopes of transplanting them at Big Spring in the Fall of 2015. A great article by Roy Appleton of the Dallas Morning News can be found here http://www.dallasnews.com/news/metro/20140930-naturalists-dig-in-to-save-vegetation-in-the-great-trinity-forest.ece that chronicles the events to salvage what can be saved from that area.