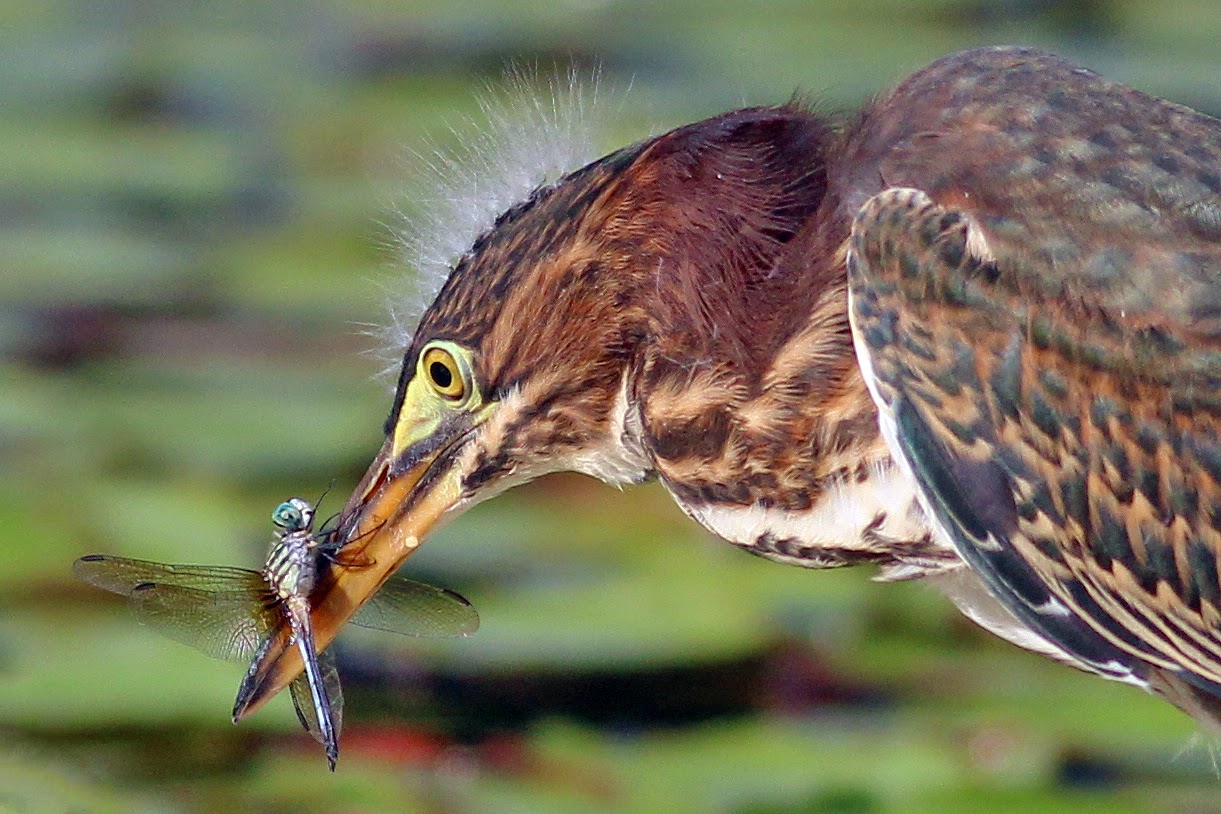 They are some of the most elusive birds to see on the Trinity River. Small in size at only 12-18 inches with the ability to blend into almost any background, the Green Heron is one of the most difficult birds of summer to spot. 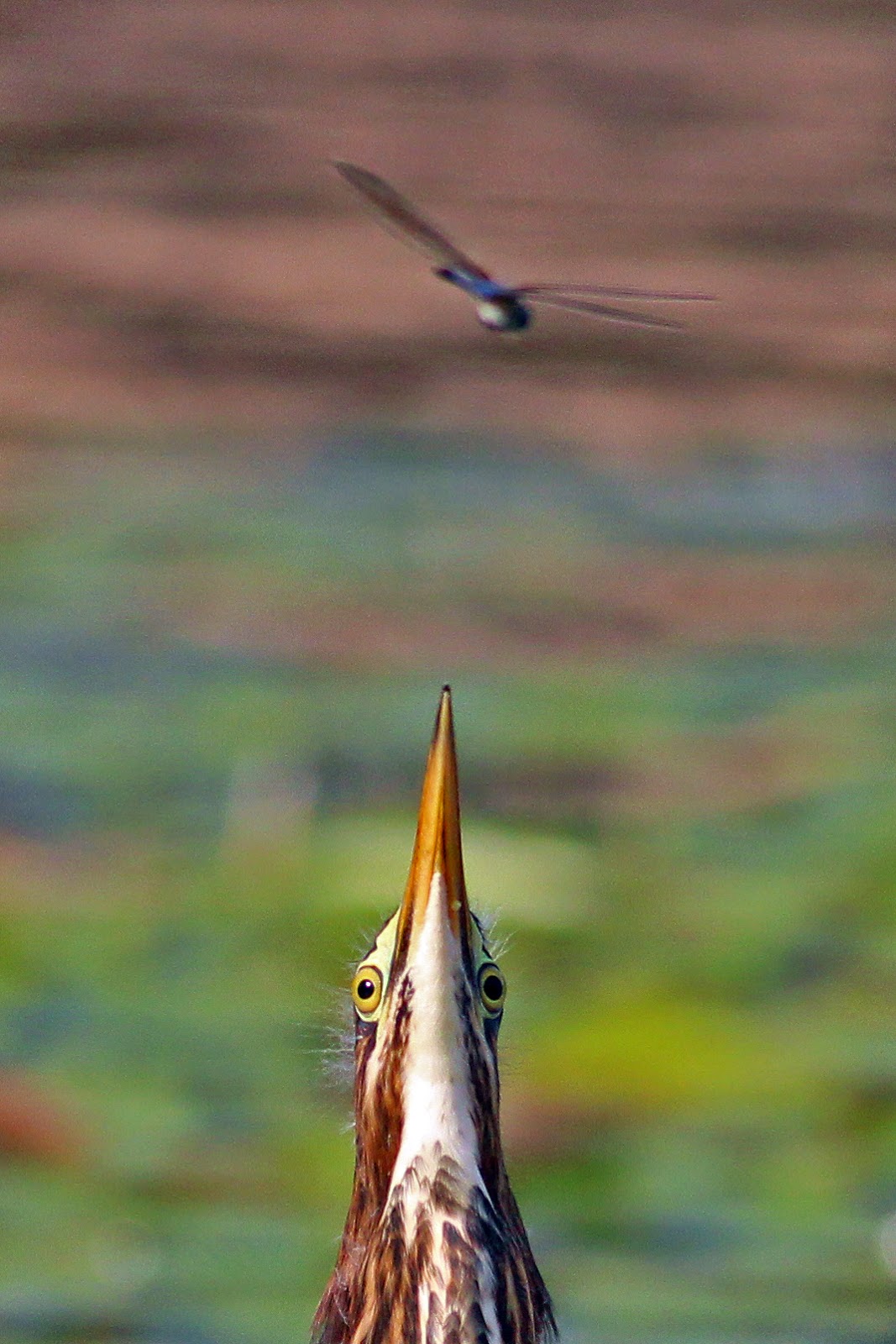 The Green Heron haunts many of the places humans would never dare go. The swamps, backwaters and impossible flooded reed lined shorelines of unnamed ponds and wetlands that lie within the river basin. Interwoven with rings of poison ivy, greenbriar and loose sand these marshy pond holes are the hidden lifeblood that drives the mid-summer species of birds that reside in the Great Trinity Forest. 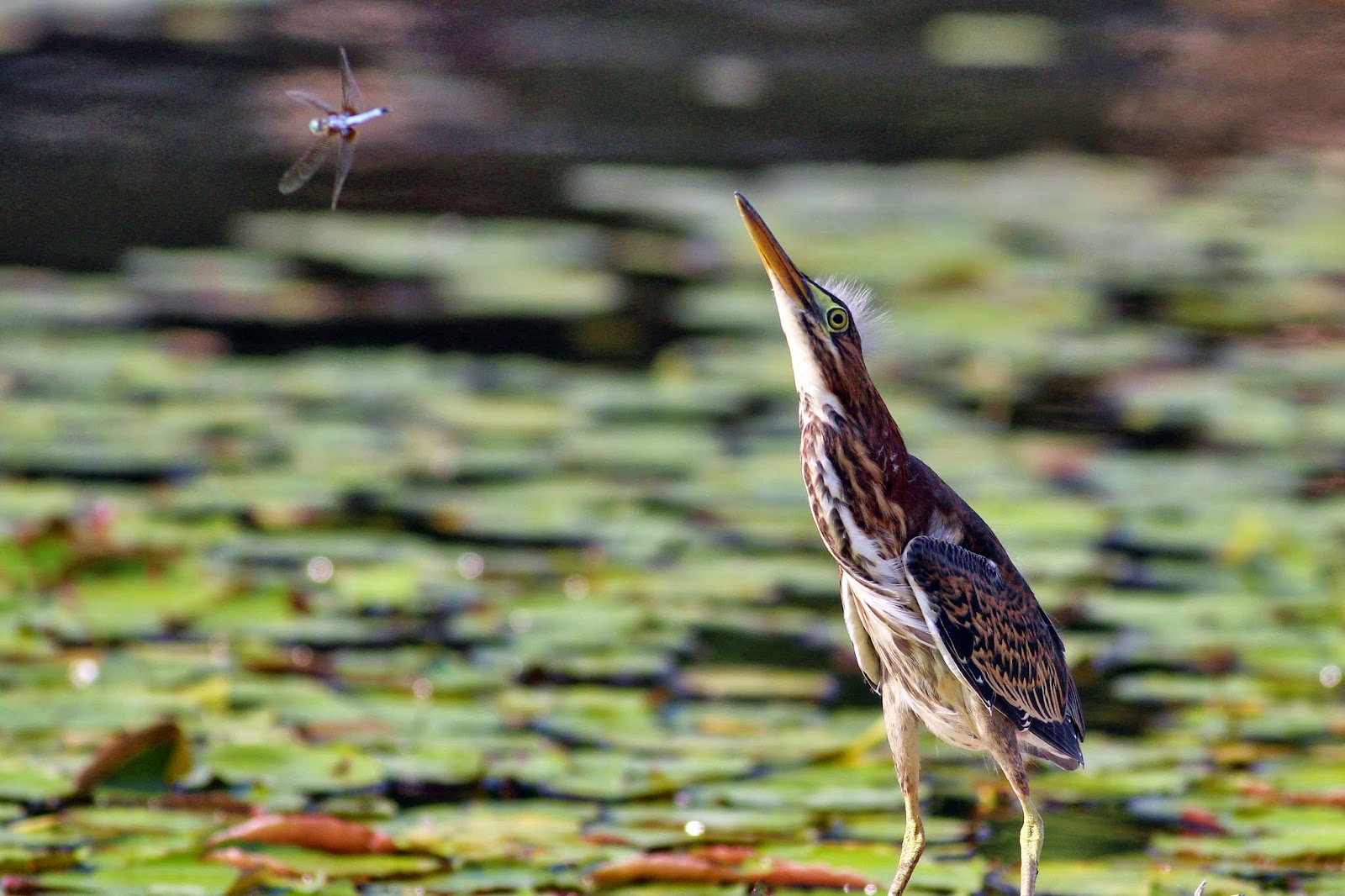 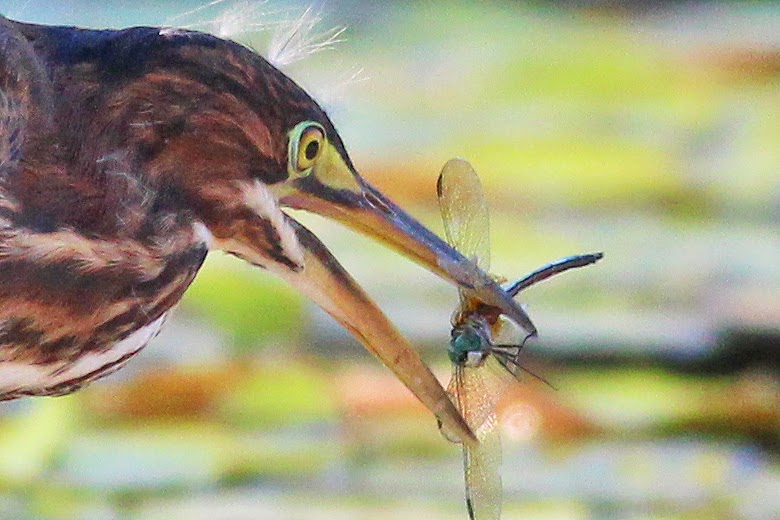 The photos in the post feature a group of three juvenile Green Herons in August 2014 who allowed the rare chance to creep close and observe their hunting and fishing behavior.

Over the course of a few evening visits spanning a couple weeks the young birds go from clumsy young birds trying to catch food on their own…to well honed fishers of water and hunters of mid-air. 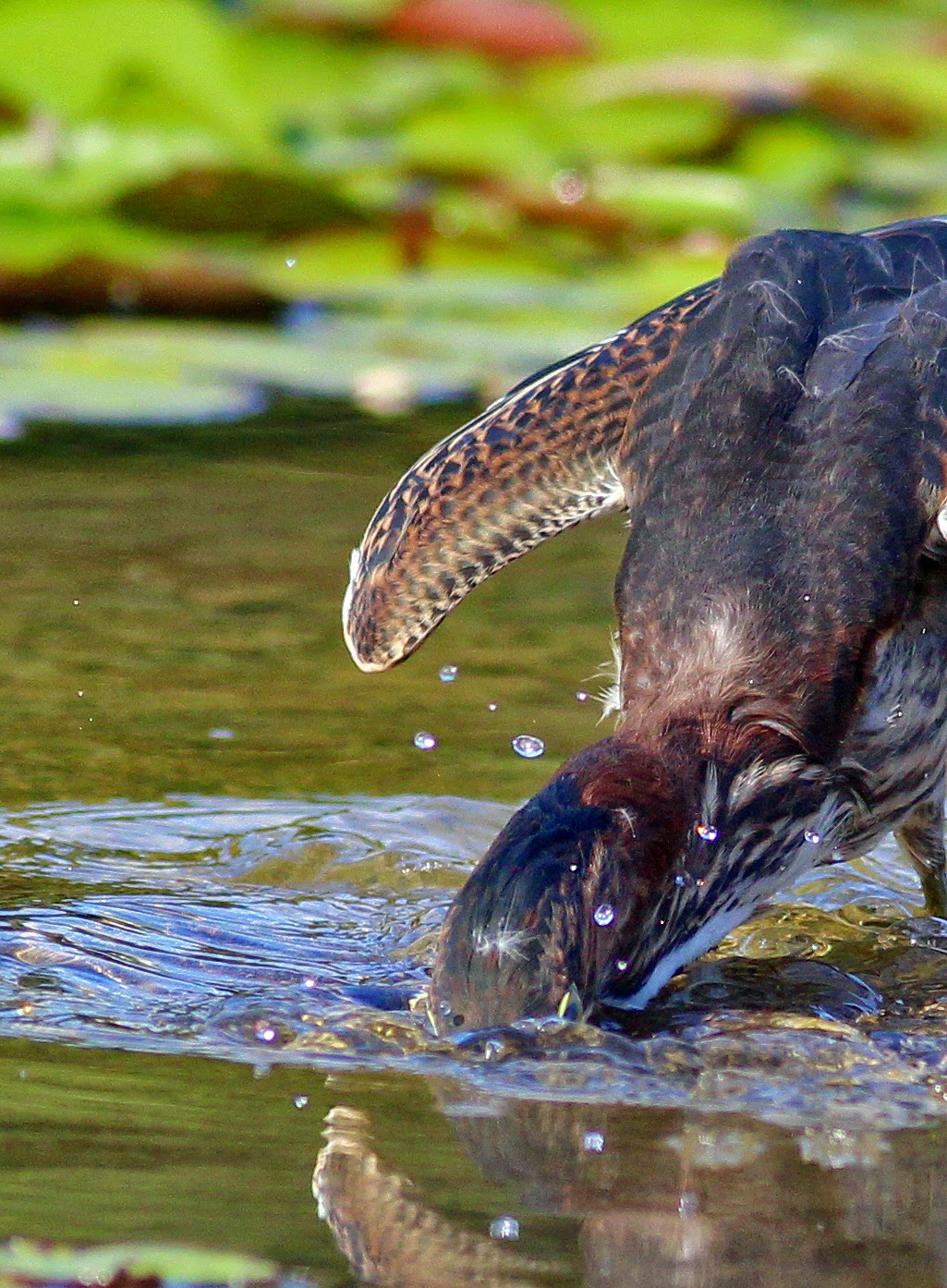 The birds seemed to keep a schedule and hunted for food during the time of day when sun’s rays turns all it touches into gold. A great time to see one of the all time great hunters stalk its prey by silently standing at the edge of the water with its neck folded back on its shoulders….then quickly lunge into the water and grabs or stabs its prey with its spear-like bill. 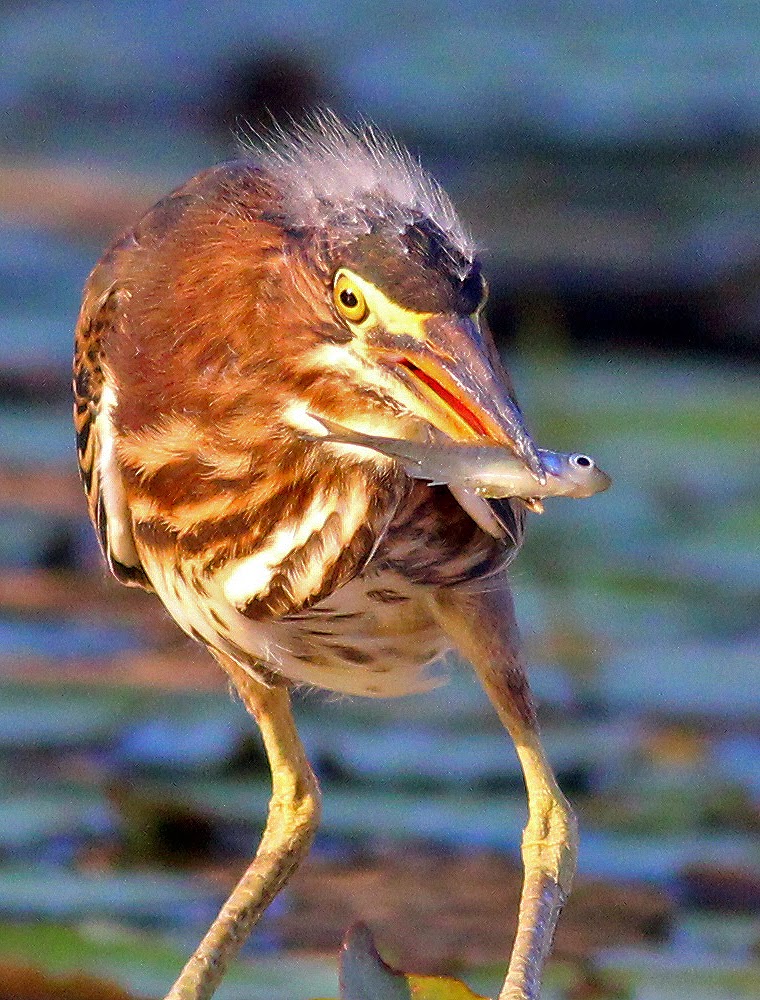 Like the intelligent American Crow, the Green Heron it is a wary and venturesome bird, blessed with sufficient intelligence to discriminate between real and imaginary dangers and often making itself quite at home in a wide range of food rich environments.

Those who pay close attention to birds often notice the hardwired traits of many species exhibited as rigid and unbreakable instincts among birds. A rare number of species break that mold where they can adapt to their environment, observe and overcome challenges. Seems that the Green Heron is at the top of that game, going places and doing things other birds lack the brainpower to accomplish. 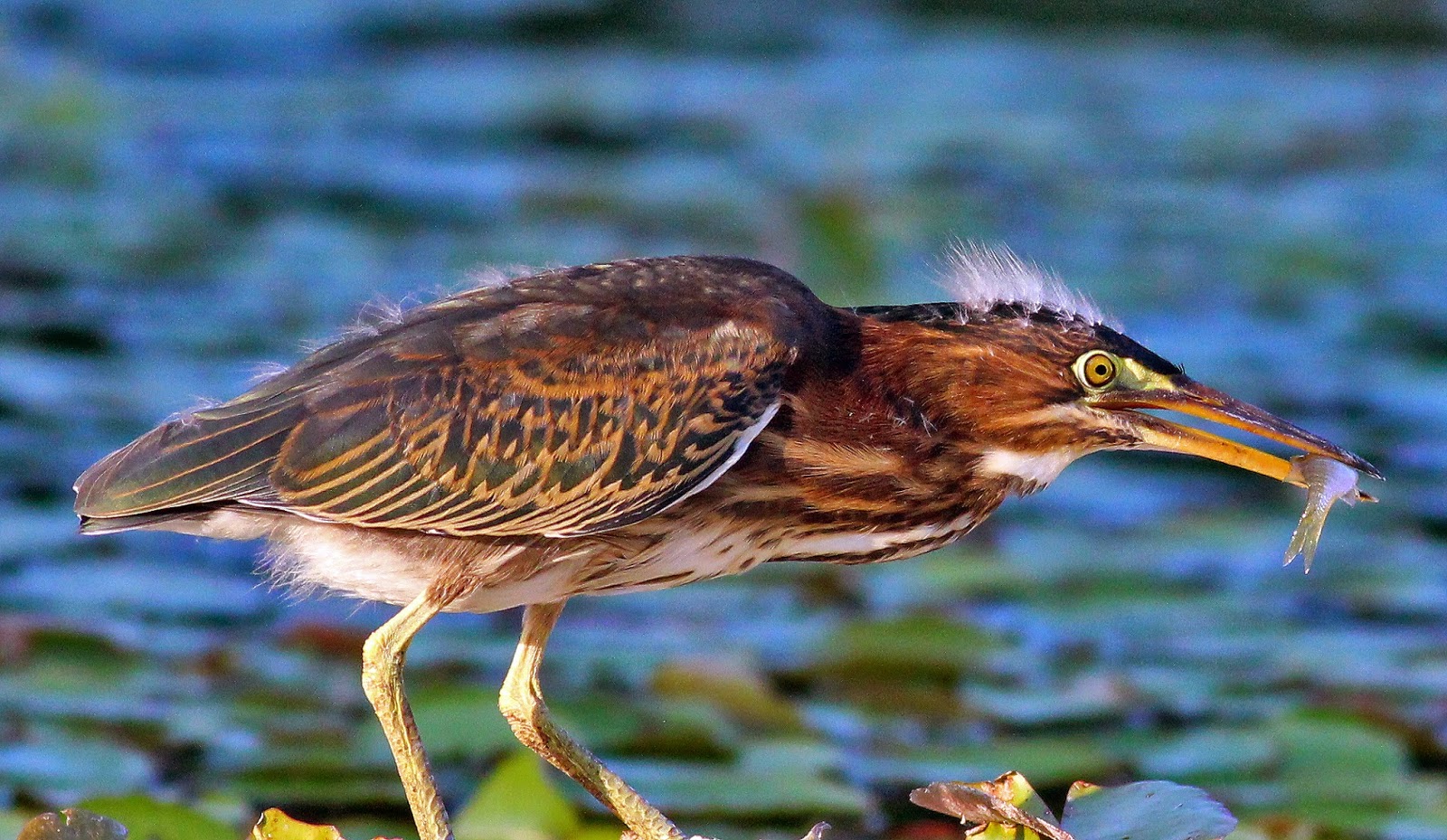 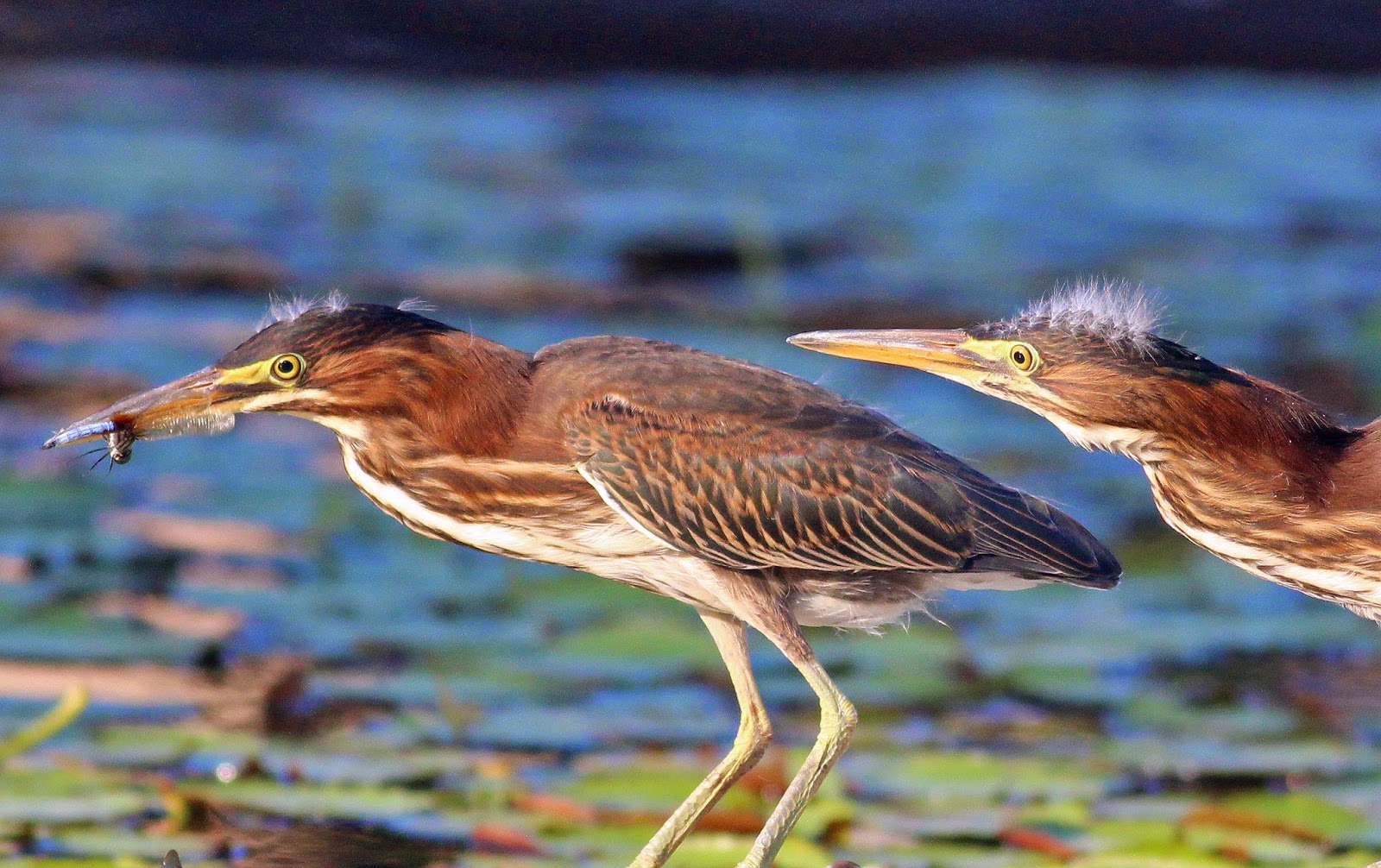 The Green Heron is part of a family of small herons that sometimes are considered one species. When pooled together, they are called Green-Backed Heron. When divided, they are the Green Heron, the Striated Heron, and the Galapagos Heron. The Green Heron Butorides virescens is a small heron of North and Central America. It was long considered identical with its sister species the Striated Heron Butorides striata, and together they were called “Green-Backed Heron”.

The Green Heron is a spring and summer resident to Texas, itbreeds in most of the Eastern United States from the Canadian border south to the Gulf of Mexico and west to the Great Plains, West Texas and Southwestern New Mexico.

The favored habitat of the Green Heron is small wetlands in low-lying areas. The species is most conspicuous during dusk and dawn, and if anything these birds are really nocturnal rather than diurnal, preferring to retreat to sheltered areas in daytime. Often found in the shade of nearby roosting trees, they only come out when large numbers of dragonflies were upon lilypads.

Green Herons are common in North Texas, but they can be hard to see at first. Where larger herons tend to stand prominently in open parts of wetlands and ponds, Green Herons tend to be at the edges, in shallow water, or concealed in vegetation. A quiet approach to Green Heron habitat and a scan of the brushy banks can often yield a glimpse of a small, hunch-backed bird with a long, straight bill staring intently at the water. 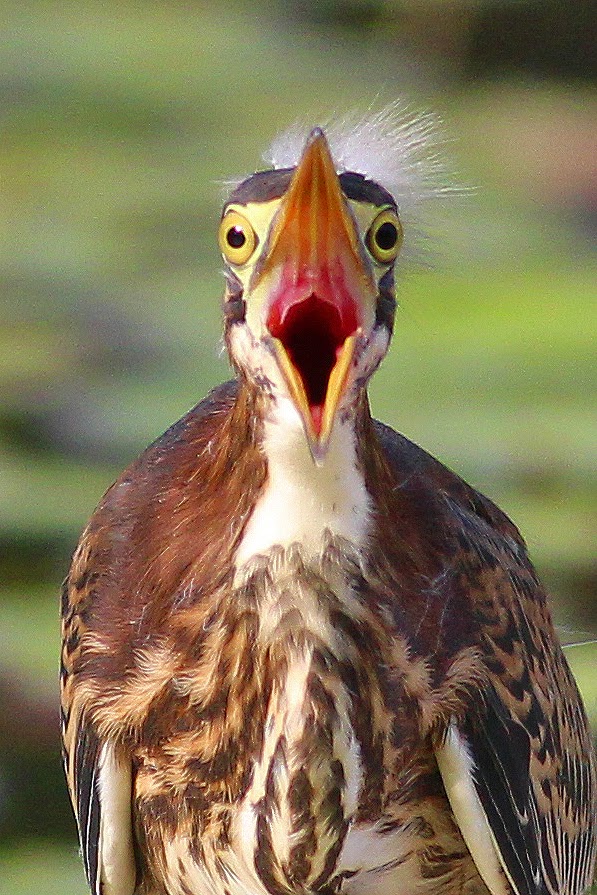 The downy young green heron is scantily covered with “drab” down, thickest on the back and longest on the crown. The color varies to light gray on the underside and to “hair brown” on the crown. The juvenile plumage is acquired in the usual heron sequence and is complete before the young bird reaches the flight stage, when fully grown.

The males and females are distinguishable even in the juvenile plumage. In the young male, in August, the crown is solid, glossy, greenish black, the sides of the head and neck are solid creamy beige, the chin, throat, and neck stripe are yellowish white, spotted with black and the back is solid, glossy, dark green.

The wings are the same color as the back, but the lesser coverts are edged with beige and the median and greater coverts are rounded (not pointed, as in the adult), edged with pale buff and have a triangular buffy white spot at the tip of each feather.

The young female differs from the juvenile male in having chestnut streaks in the crown and having the sides of the head and neck streaked with chestnut, buff, and dusty color.  In both male and female, the juvenile plumage is worn during the fall and early winter, without much change until they partially in late winter.

Green Herons typically stand still on shore or in shallow water or perch upon branches and await prey. Sometimes they drop berries, insects, or other small objects on the water’s surface to attract fish, making them one of the few known tool-using species. This feeding method has led some to title the Green Heron and closely related Striated Heron as among the world’s most intelligent birds. They are able to hover briefly to catch prey too but seem to be firmly planted on terra firma when hunting.

The lighting speed at which they can elongate their necks makes for some difficult photography. With such speed catching one grabbing dragonflies from thin air is a difficult proposition. It is all over with in less than a blink of a human eye. Dragonflies themselves are some of the most agile insect fliers and to have both super fast species fight it out makes for some tough shooting.

The most common feeding technique for the Green Heron is to stand in a crouched position, horizontal to the water surface, with neck and head retracted. They stand still for long periods of time before changing sites. Standing is often interspersed with slow walking in a crouched posture in the water or bordering vegetation. Herons use their feet to cause potential prey to move and then capture them. They may also dive from perches head first into deep water, becoming submerged very briefly.

Green herons are carnivorous, mainly eating fish and invertebrates. They are opportunistic foragers with a broad prey base, depending on the availability of species present. They exploit superabundant food resources, such as the dragonflies seen here. Their invertebrate diet includes a wide range of things from frogs, tadpoles, earthworms, dragonflies, damselflies, waterbugs, grasshoppers, and crayfish. Some of the many fish eaten are shad, sunfish, catfish and perch.

The birds in the photos here were eating many tadpoles and small frogs at the time but did not photograph well do the smallish size of the prey. The Green Heron’s repertoire of hunting down wayward dragonflies is far more interesting and entertaining. 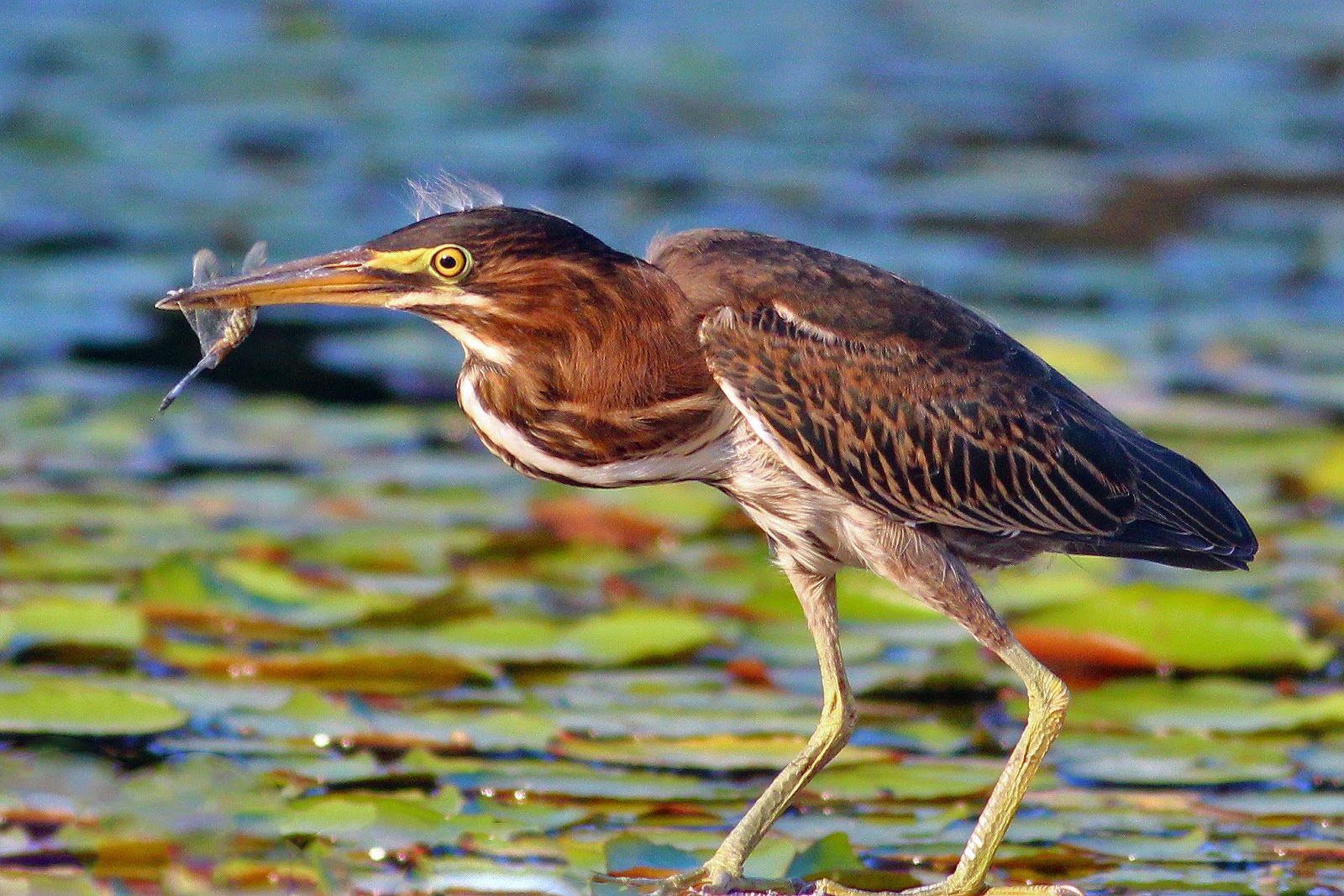 The least employed hunting technique used by the Green Heron is seen below, a flush and herd technique where the heron plops into deeper water then drives bait fish and tadpoles into shallower water for easier hunting. The Green Heron prefers water not more than 3-4 inches deep at most.

It becomes readily evident in drier years like 2014 the importance of the permanent wetlands that exist along the Trinity River. These secluded spots afford the establishment of high quality rookery sites with abundant food supplies that can lead to successful nests year after year. Without such places the biodiversity of the Great Trinity Forest is severely hampered and sterilized.