Liz Fernandez, Director of Trinity Watershed Management, photographs a portion of the burned fifteen acres of the Great Trinity Forest in the Big Spring Conservation Area, July 25, 2014. Currently under investigation as an act of arson.  Stark contrast to the area as it looked less than two months before during the height of the wildflower bloom.

A Brief Summary Of The Fire
Word of the fire spread quickly. First noticed by a Dallas Police Department helicopter in the early afternoon of July 23, 2014. The police on the scene relayed that Air One the police helicopter observed four different burning areas. Dallas Fire Rescue was summoned to the scene and fought the fire till sunset.

Arson investigators arrived late in the day and began an investigation into the cause of the fire. Sitting in one of the most remote parcels of land inside Loop 12, human visits to the area are thought to be rare. Behind a series of locked gates and private property frontage on a nearby road, access to the site is difficult. We all hope that a cause can be determined.

If it was arson, we all hope that the party responsible is brought to justice and prosecuted to the limit of the law. It is quite unsettling to all involved that something like this occurred. Not just the fire itself but that firefighters risked their own lives fighting the fire.

By my estimate, the fire consumed about fifteen acres. Twelve acres in the City of Dallas owned Great Trinity Forest and another three acres to the north owned by Richard and Paula Pemberton Hill.

At right is a map of the extent of the fire damage. It was contained on the north and south by Bryan’s Slough. On the north end the fire stopped at the edge of a large swamp area which extends all the way to Bruton Road.

To the south, the fire traveled in the Texas Horse Park property moving south through the woods and down an ONCOR ROW.

The fire was stopped at where Bryan’s Slough crosses from east to west under the powerline ROW. Dallas Fire Rescue worked this area too, a number of small caliper trees mostly species of ash and cedar elm appear to have been either burned or scorched in this area.

Between the northern and southern ends of the fire sits the Big Spring conservation area. A special place tucked into the woods.

The Fire Scene At Big Spring 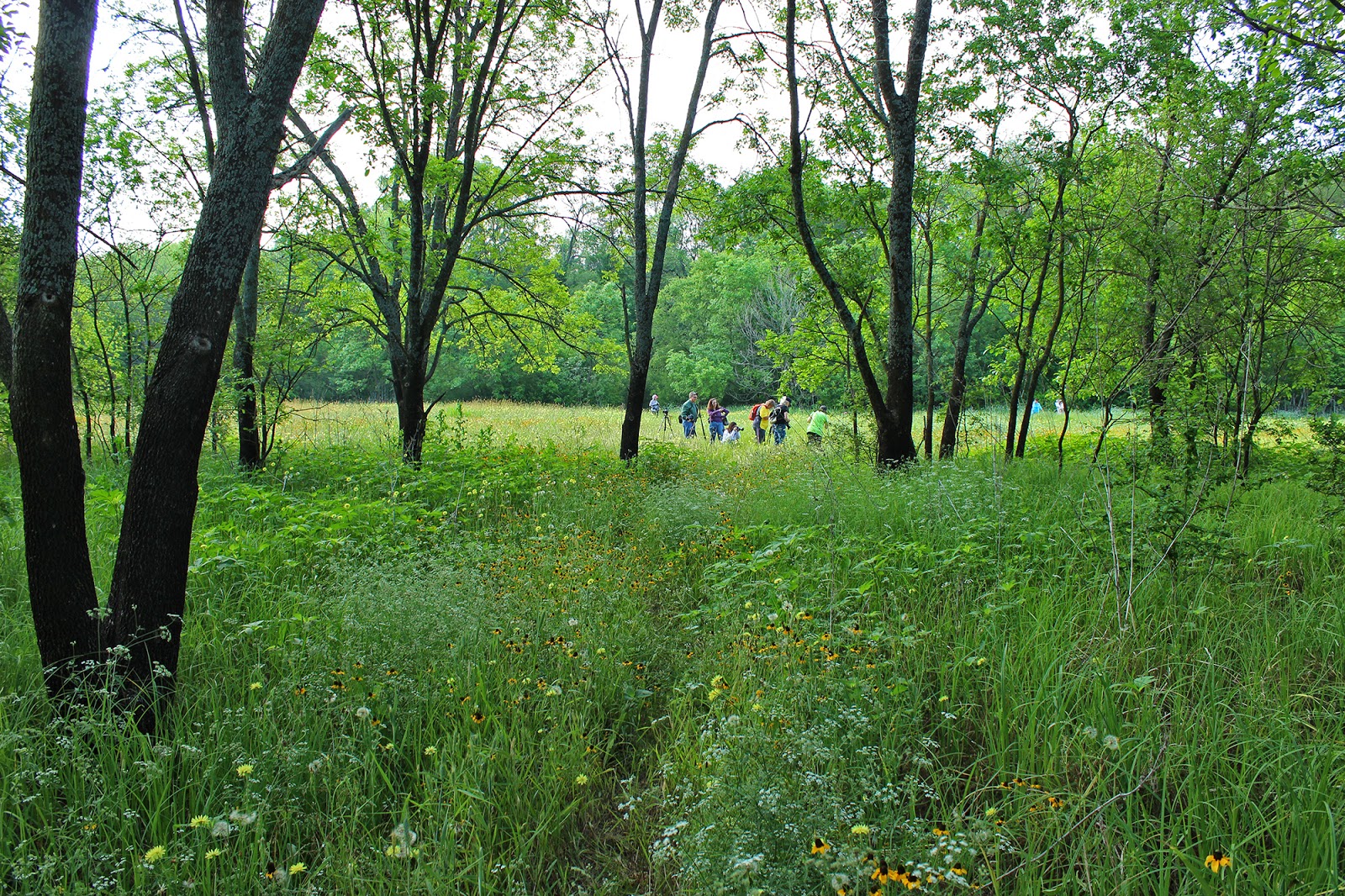 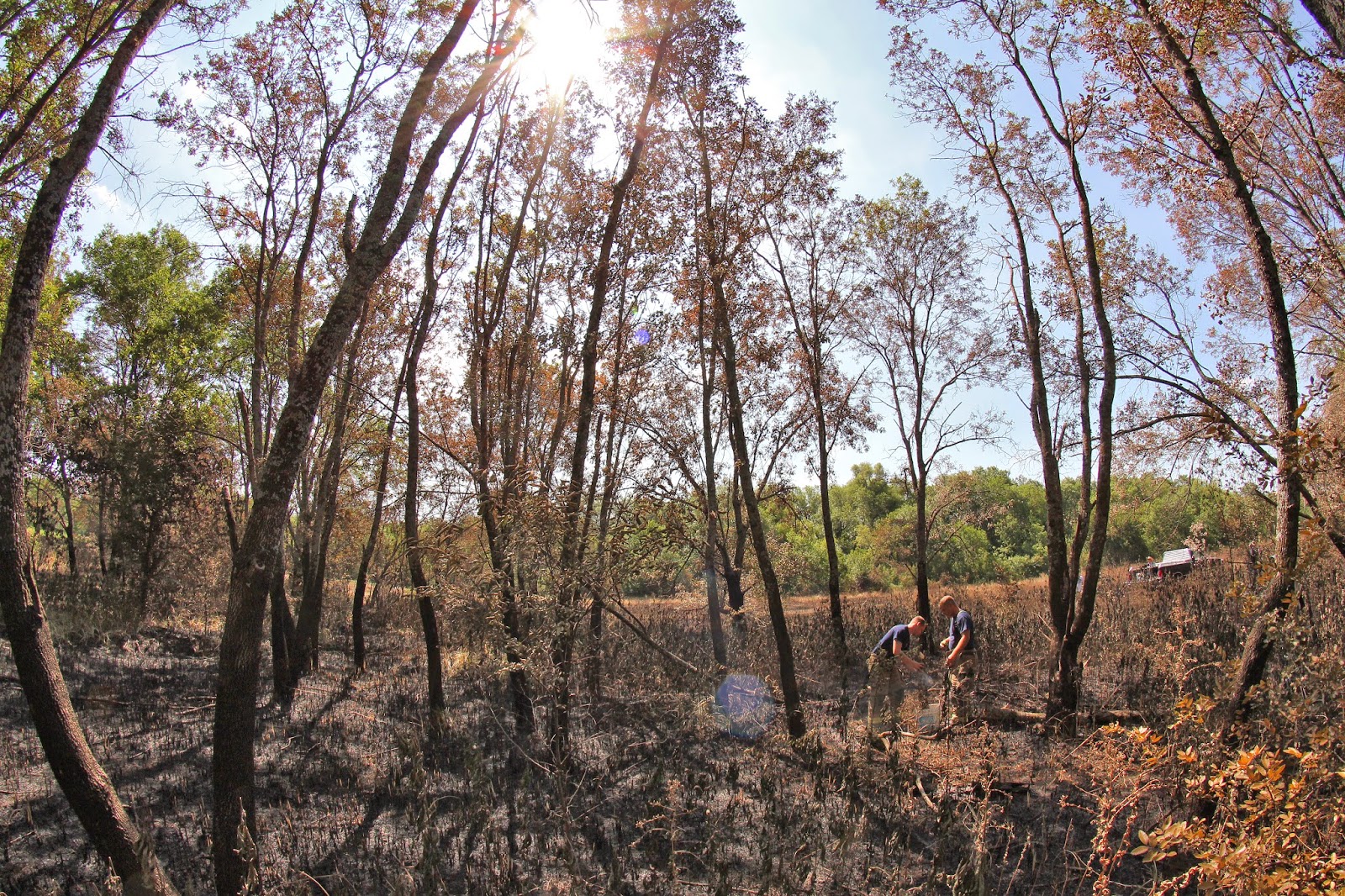 The disparity of the fire scenes when viewed through photos in before/after makes one cringe. Taken less than sixty days apart the first photo shows members of a Meetup nature photography group at Big Spring. The lower photo taken in almost the same spot shows two firefighters from Station 34 working on the hotspots in the treeline west of the coneflower field.

These photos were all taken on July 25th two days after the initial July 23rd fire. Hotspots remained in the woods to the west where the fire seemed to burn much hotter than the open field to the east. Initially, we were all there to observe the first managed mowing of Big Spring’s upper buffer zone as part of a newly drafted management plan for the conservation area. As mowing commenced many of us went to look at the fire damage.

By 10am, the wind started kicking up from the south some and inside the treeline the slow smoldering embers in the larger downed trees puffed to life.

In the interim between the fire department’s arrival, TPWD Biologist Brett Johnson and several others fanned out into the woods identifying all the hotspots ahead of time. This reduced the amount of energy and valuable time on the part of the firefighters once on scene.

It’s the acrid smell, lack of humidity and lack of shade that makes this area feel like something out of the underworld at the moment. No birds sing. No grasshoppers jumping under foot. No rustling sound of the wind. Inert. On a day when the temperatures were only 90 downtown at the 11am hour, it was 114 degrees in the field.

It is hard to believe the short term loss is counterbalance by the promised of exact scientific knowledge that this area will recover. On this particular day in the field were a broad collection of folks with science backgrounds who all remarked on how nature tends to recover from criminal acts like this. The smell and wholesale damage temper that line of thought. The damage just appears to look so terrible it is hard to find a silver lining.

What is lost is the groundbreaking work to some extent that was going on in this field by Jim Flood and Tim Dalbey. Earlier in the week it was discussed not to mow this area so that late summer and fall blooming species of plants could be identified. This area had been yielding many plants that had not been documented in Dallas County for decades or were absent from records altogether. It is a great sense of loss that the work going on here will be curtailed till another growing season.

Unknown is the extent of the damage. Poking around under the soil surface it appears that there is good moisture just under the surface and hopefully root systems and dormant seeds were not affected.

Mowing As Part Of A Management Plan

A year or more in the making, a rough drafted Big Spring Management Plan saw the light of day for the first time on the morning of July 25, 2014. Attended by employees of the Corps of Engineers,  Lewisville Aquatic Ecosystem Research Facility (LAERF), Texas Parks and Wildlife, City of Dallas Trinity Watershed Management as well as a host of citizens who have all worked very hard to see this day.

One man, Billy Ray Pemberton, has mowed this land for many years on his own dime and using his own equipment. For the last ten years it has been a near solo effort by him. The overall management plan should build upon his decades of work here and be used as a touchstone for the future.

In the winter 2013-2014 the Lewisville Aquatic Ecosystem Research Facility was contracted by the City of Dallas to develop a plan with citizen input for the aquatic and outfall aspects of Big Spring. This past week in late July, we learned that LAERF would also work on a mowing plan for Big Spring which surprised a few of us. Citizen input continues into August on that front. 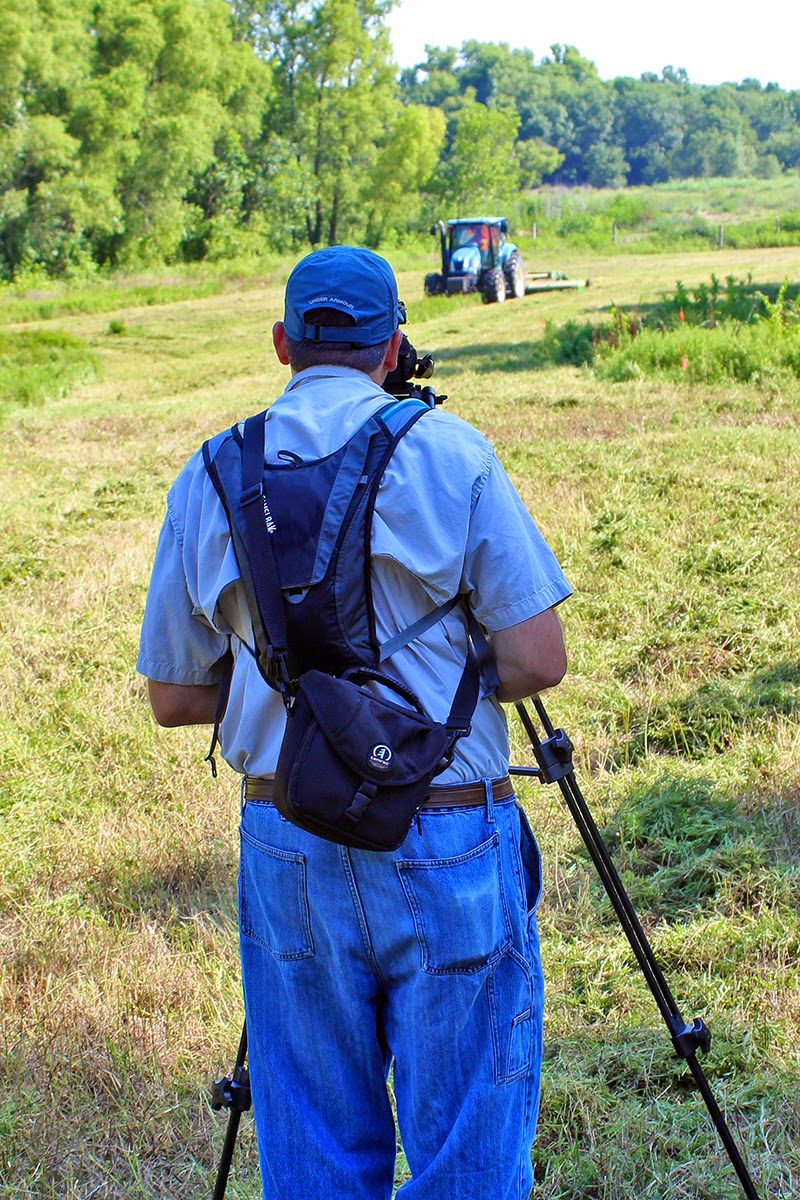 The management ideas for Big Spring will be adaptive and flexible inside the framework of what will hopefully become an official Dallas Landmark. The process began a year ago and is working through City Hall. Getting from here to that goal requires lots of planning and restructuring of how forested lands are managed.

One such component of that is mowing. Prescribed at one foot high, the bat wing mower from the City of Dallas made easy work of the wildflower zones and grassy areas above and below Big Spring.  See video below for a sample, mowing in the lower area near the spring outfall and the second part of the clip is mowing up near the lone mesquite tree on the terrace:

The management plan, still in draft form, allows for natural recruitment of self sowing plants like pecans, walnuts and other beneficial native species. Many of these trees are already 3-5 feet and height. They will help fill in existing open areas and spur growth of other species. Mulberry, Ironweed and Hibiscus are just a few of the other species here that will see leaps and bounds of growth in years to come.

Mowing distributes seeds(both good and bad) from plants. This emulates natural processes and often stimulates new growth the following year. It will be interesting to see how this fresh mowed area plays out next year.

Much more coming in the near future with how this area will be managed, maintained and open on a broader scale to the citizens of Dallas.