Wealthy is he who finds the silver lining in life’s unexpected vistas. That’s the beauty of the contrary nature found along the Trinity River. Photogenic places that belong in a calendar spread for a Texas Hill Country state park. There are a few on the river. Scattered here and there. Pocket places that you can show people and leave them speechless. Take a critic or a cynic of the Trinity River Project to McCommas Bluff and they have a change of heart. So large in scope are the bluffs that standing at the river’s edge on one end, you cannot see the other.

That vista, the relatively unchanged sight that man has viewed for thousands of years was forever altered in 2012.

You can read the title of this post a couple different ways. The bluffs are finished. I was fortunate to see the bluffs in their natural state before a Dallas Water Utilities Project created a permanent scar on one of the hidden gems of Dallas County.  What happened here should serve as a lesson. A lesson to never repeat such an unfortunate project.

McCommas Bluff is the only limestone bluff on the Trinity River. There are bluffs made of clay, sand and mud along the river but this one is the only limestone outcropping along the longest river wholly contained in the State of Texas. Registered as a Texas State Historic Landmark, the site was formally made a 111 acre Dallas County nature preserve in 1985. Part of the Dallas County Open Space Program it is a part of two dozen nature preserves in the county and open to the public.
Getting there: 1200 Riverwood Road Dallas Texas
Alternate address for secondary entrance: 7225 Fairport Road Dallas, Texas

Navigation of the Upper Trinity River

Since the founding of Dallas, many of the city’s leaders have dreamed of navigation on the upper Trinity River, but none of their attempts achieved lasting success. Fluctuating water levels and massive snags in the river below Dallas hindered early navigation. In 1866 the Trinity River Slack Water Navigation Co. proposed dams and locks for the waterway. Capt. James H. McGarvey and Confederate hero Dick Dowling piloted “Job Boat No. 1” from Galveston to Dallas, but the trip took over a year. In 1868 the Dallas-built “Sallie Haynes” began to carry cargo southward. Rising railroad freight charges spurred new interest in river shipping in the 1890s. The Trinity River Navigation Co., formed in 1892, operated “Snag Puller Dallas” and the “H. A. Harvey, Jr.,” which carried 150 passengers. The “Harvey” made daily runs to McCommas Bluff, 13 miles downstream from Dallas, where a dam, dance pavilion, and picnic grounds created a popular recreation spot. In 1900 – 1915 the U. S. Government spent $2 million on river improvements, including a series of dams and locks, before World War I halted work. A critical 1921 Corps of Engineers report ended further federal investment. Despite sporadic interest in later years, the dream of Dallas an an inland port remains unrealized.

The construction project overseen by Dallas Water Utilities began in August of 2011. The purpose was to protect a 72 inch water main that serves as a freshwater supply serving South Dallas, Cedar Hill and Duncanville. The original line was unfortunately built right down or within 100 yards of the Trinity River Channel making it prone to potential erosion issues. In order to protect the line, the Bluffs were to be destroyed, wholesale.

The footprint of the actual line is only 10-15 feet horizontally at most. I think any reasonable person would not have an issue with protecting a vital waterline to a million people. When that project quickly mushroomed into something larger than a football field it gave even hardened real estate developers I know accustomed to scraping pad sites, a sick feeling.

Gone first were the trees. All the trees were chopped down save one, a large juniper tree seen in the center of the photograph at left. Despite being worked around for a year, it is now absent from the finished project. I assume removed like all the rest. I went down to the site and photographed the rings of some trees that were chopped down in August of 2011. Along the bluffs were ash, post oak and bur oak. Some of these trees, based on their rings were at least 75 years old, some much older.

The point to draw from this is that all previous construction projects in the last century at McCommas Bluff, including those in the utility right of way, avoided chopping down these trees. Somehow, someway, someone decided not to take out the trees lining the bluffs. This time it happened and is irreversible.

Looking at the finished product of the waterline project, the vast majority of the trees including the two octogenarian aged trees seen at right, could have been saved. Nothing anyone can do about it now. It’s only hoped that there was some
food for thought in future projects that could have saved at least one tree, one blade of grass, something. 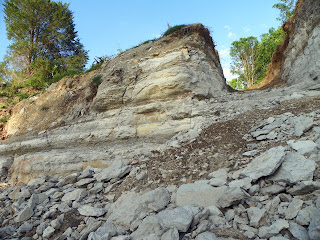 Not much happened with the site during the winter and spring. It was not until late spring that construction continued, punching large holes in the bluff to provide heavy vehicle access to the river below. I hold no ill will towards the construction company responsible for the project. They were given a job to do and did it according to the plans given. I do pause and give serious criticism to the city officials that green lighted this project. The city should have blocked off construction access to other parts of the preserve as well. Over time the construction area sprawled in size, destroying many of the fragile bluff top areas known for wildflowers in the spring. 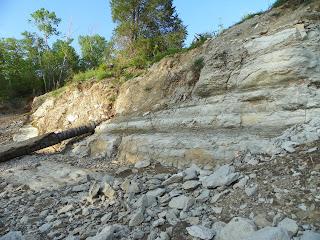 To the left you can see one of the exposed utility lines. This is not the larger 72 inch water line. The 72 inch pipe I assume is buried much deeper underground. The exposed pipe in the photo is almost made out of what appears to be cast iron and might have been wrapped at one time with an insulation material which has long since weathered away. This old pipe was always hard to photograph around since it stuck out so prominently from the cliffs. I have wondered why they left this old pipe in place, buried under the new waterline project. It now forms a prominent “hump” feature in the new sarcophagus along the bluff. 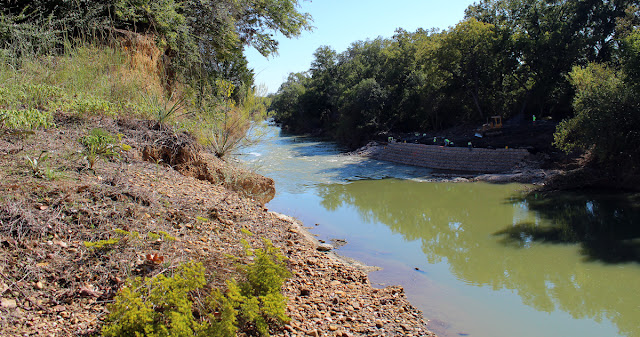 You Break It, You Buy It

One of the long term legacy issues from this construction is not the bluff face but the marred bluff top seen above. The construction zone slowly encroached across much of the preserve’s southern portion, consuming many of the prairie meadows and plants. The level top was used as a turnaround for heavy equipment, a toilet by construction workers and temporary dump for construction debris.

The native soil here is not blackland prairie clay, which was used to backfill the project. The correct soil is a sandy loam deposited eons ago on the Trinity Terrace. These alluvial sands still cover much of Southern Dallas County and provide a unique growing environment known as Post Oak Savannah. The dirt brought into McCommas Bluff does not fit this soil profile at all. If the county were to attempt rebuilding some native environment, 200 truckloads of this aggregate sand would need to be brought in to recreate the soil profile. Only then would the native species like Post Oaks, Bur Oaks, Ash thrive there. They need the moisture holding sand to live on the bluff tops.

It would seem that some sort of mitigation for tree loss is in order here. The amount of trees, foliage and plant species lost here is enormous and stretches far back into the preserve itself to the property line with the Bass family.

There are many residents along Riverwood Road enraged by what happened to the bluff top prairie. I often get an ear full from them when I stop to talk. Some are lifelong residents, lifelong fishermen of the bluff area. They cannot believe what happened.

Like a spreading cancerous tumor, poaching has entrenched itself into the bosom of the Great Trinity Forest. Both sides of the river face a widespread epidemic of poaching. The blind above was located not far from the construction area, just 1/4 mile from Riverwood Road on the right of way trail leading towards the Audubon Center. This particular blind is made from fabric panels and staked poles giving the poacher a field of fire facing west southwest. Odd about the location.

With all the ongoing construction at the bluff site and across the river it seems strange someone would hunt in this spot. For the last couple months, the construction contractor had round the clock armed security, one even boasted being armed with an AR-15 Bushmaster. I could not go back into the county owned public nature preserve during this time, I was told, due to insurance issues. So who was poaching back there and for what?

Ghost Of An Old Swamp In The Great Trinity Forest