It would be hard to find a better way on the autumnal equinox to conclude the last hours of summer than a hike along the Trinity River. A great way to spend some time with some old friends and meet some new ones. Exploring the homestead trails of Lower White Rock Creek and an historic spring that shares the same name.

Naturally, who better to lead the hike and historic walk around, than Mr Pemberton himself. One of the few men still turning a plow inside the city limits of Dallas, he is part of an increasingly rare breed of people you don’t see often in Texas anymore. Headstrong, self-reliant and driven with a purpose with the rise of the morning sun. He’s a philosopher for sure. It does not come out much when other folks are around but get him alone and out in his woods, the deep thoughts come out.

Last Sunrise Of The Summer Over The Wetland Cells

A morning visit to the Pembertons is usually a 2-for-1 visit. A double hike blended into one. The first is usually a quiet morning hike that begins on the other side of the river usually in the Wetland Cells near the Joppa Community or the Nature Preserve that shares the same name. Here the crescent shaped path of the Trinity and hill to the west parallels much the same as the biblical town of Jaffa, now known as Tel Aviv. The stories of freedmen building a town out of the bondage of slavery can also be seen in every facet of the communities spread oceans apart. Fascinating place and somewhat obscure.

To see the crescent shaped path of the Trinity one great place to check out is the “pyramid” feature located due east of Fellows Lane in Joppa. The top of this man made feature built several years ago affords a great view of the wetland chain from I-45 to Loop 12. Out of the flood plain, the half acre sized summit will one day host a picnic area I believe. 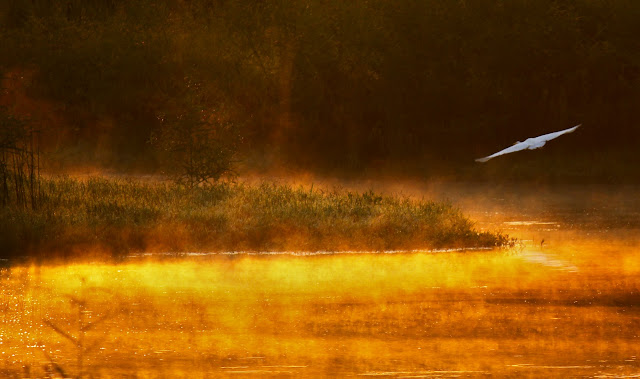 The water used in the wetland cell project comes mostly from the wastewater treatment plant upstream. It has no smell and I have been told that this water is actually cleaner than the Trinity River itself. Sitting above the Trinity River some 25 feet during normal river flow it only floods when the river experiences prolonged rain events. One interesting note about this place is the fog that seems to develop along the wetland cells even on warmer mornings. 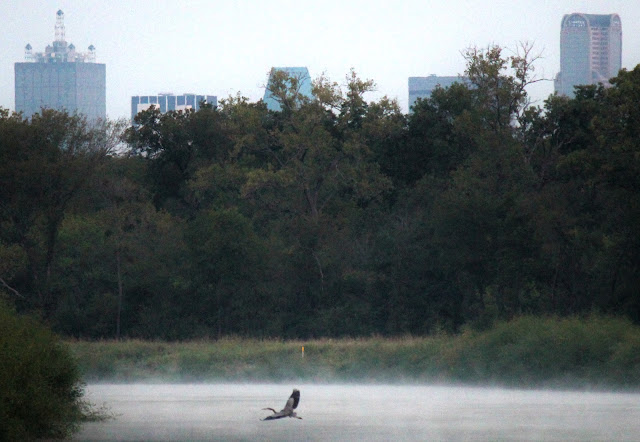 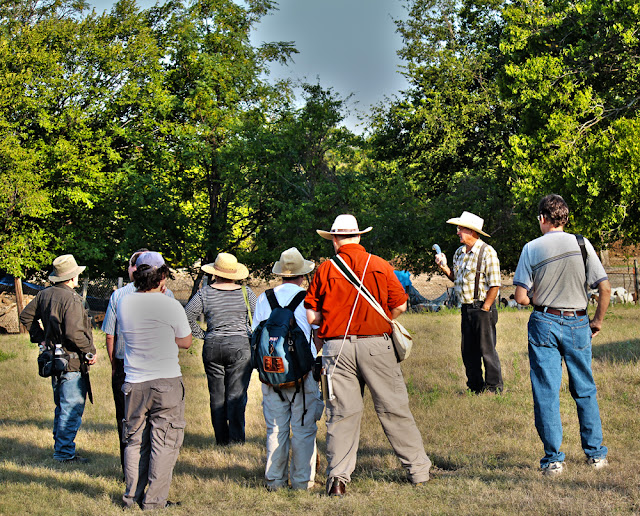 The equinox was a great day to bring together a group of people from all walks of life who are interested in the folks, flora and fauna that make the spring complex in Pleasant Grove. It was a great walk through of local history as told by Mr Pemberton seen above. The photo above was taken at Case Pemberton’s cabin site built in the 1880s. The group was just about the right size for such an outing. A great bunch of people I have conversed with via email over the last couple years and I was glad some of us could finally meet face to face. Some were members of the Dallas Historical Society and a member of the Sons of the Texas Revolution. A couple have even struck out on their own and done some of the Devon Anderson, Joppa and McCommas Bluff hikes mentioned here.

The last week of September marks the 169th anniversary of the signing of the Bird’s Fort Treaty which brought Sam Houston to North Texas. Signed on September 29, 1843. 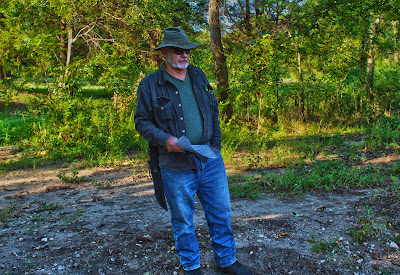 It was also a privilege to have local historian MC Toyer join the party. He is the definitive authority on Dallas history, cabins and pioneer genealogy in this part of Texas.

Mr Toyer, seen here standing at White Rock Spring gave a great talk about the background of the spring site, White Rock Creek and Pleasant Grove. So much history happened here on this spot that during our visit we did not get around to discussing the Native Americans who camped here until our return hike from White Rock Creek.

MC Toyer started his talk about the Indian campaigns and expeditions through this area in the 1830s and early 1840s led by General Edward Tarrant and Captain James Bourland. As a result, Bird’s Fort was built in present day Euless. From the fort, many veterans of these Indian campaigns who had seen the land, decided to settle the Dallas area using their 640 acre land grants appointed to them as war veterans. Land rich and cash poor, the Republic of Texas paid veterans for their service with land. The scrip was often called Toby Scrip, for Thomas Toby of the Toby and Brother Company of New Orleans, the chief scrip agent. During the republic era, 1,329,200 acres of public land was sold or used directly to retire debt.

The Beeman family from Illinois were the first to settle this area permanently. John Neely Bryan and others came and went, in and out of the Dallas scene to follow their fortunes in the California gold fields or real estate speculation elsewhere. The Beeman family stayed. Together as a family they owned large blocks of Dallas land holdings including much of what we now call the Great Trinity Forest.

Big Spring as the Beeman’s called it, was on the Big Spring Tract of the Beeman holdings. 320 acres in size this particular tract had two similar tracts nearby called the Prairie Tract and the Cedar Brake Tract. Each tract served a different purpose. One provided great grazing land and farming use. The Cedar Brake Tract provided a source of lumber which was scarce prior to the building of the railroads. 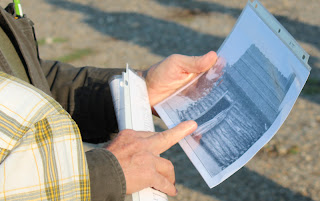 180 acres of the Big Spring tract was inherited by Margaret Beeman, wife of John Neely Bryan in 1856. The Bryan family lived here at the springs from 1867 to 1880.  MC Toyer brought along an interesting photo that he believes to be Margaret Beeman standing in front of her home at the spring site shortly after the Civil War. Mr Toyer brought the photo along to see if he could orient the old photo to the contemporary scene. The background did appear quite similar to the present day. Some gravel mining in the area has changed the slope of the terrace over the years so the area where the Beeman cabin was once believed to have stood looks similar but not exact. It would be fun to pursue this further. At the site, since a well was not used at the time, we thought back to how far someone would be willing to walk every morning for a bucket of water.

In 1880 Case Pemberton bought the Big Spring property from Margaret Beeman for $1000 payable in two installments, $400 in January 1882 and $600 payable in January 1883. Case Pemberton ran a dairy operation on his property until his untimely death in the early part of the 20th century. Case Pemberton like many dairymen would deliver milk to town in the morning. Rather than return with an empty wagon, he would fill it with ice, food and other items, then sell them in the afternoons at a small store located at the corner of Lake June and Pemberton Hill. His death came as a result of an armed robbery at his store. After his death, his property, known as Bryan Springs was divided up among his heirs. Mr and Mrs Pemberton live on one such portion of a parcel today.

It does not take much to get Mr Pemberton excited about showing off Case Pemberton’s farming equipment. One twinkle in his eye is all it takes to pull out his prized Corn King Hand Sheller. I found an old ad for one dating back to the late 1800s. I believe Mr Pembertons sheller is older than the advertisement. 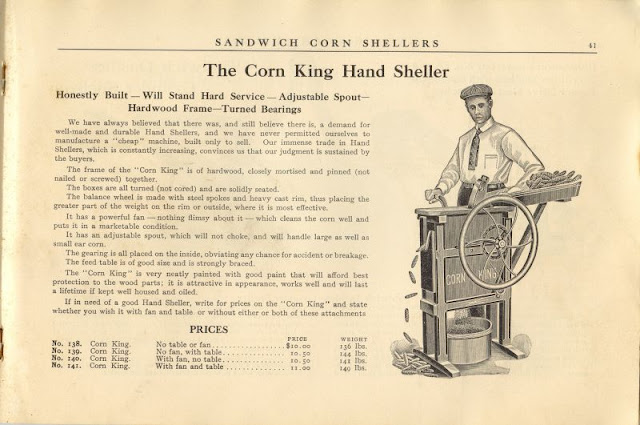 Looks like the guy in the ad bent over too far and shucked off the bottom half of his tie! You could spend all day just looking at this old farm equipment, things that were probably hauled in overland by wagon rather than rail.

Really easy to get sidetracked at the garage. Which is a good thing. One interesting heirloom after another comes out of it. A piece of cast iron, some old horseshoes, some blacksmithing apparatus. Each has a story to tell. I always try and make a little time to look at one or two of these old things on a visit. That little bit of time often turns into an hour.

Beyond The Spring And Down Into The Back Forty

Passing from the high terraced North Texas prairie to the river bottoms is marked by the famous Beeman Walnut Tree. Near the base about 18 inches up is a railroad spike driven into the tree in the year 1908 marking the high watermark of Dallas most historic flood. From this spike, still up on the terrace, one can only imagine the mile and a half wide flood ravaged river that stretched from this point clear to the freedmen’s town of Joppa to the west. 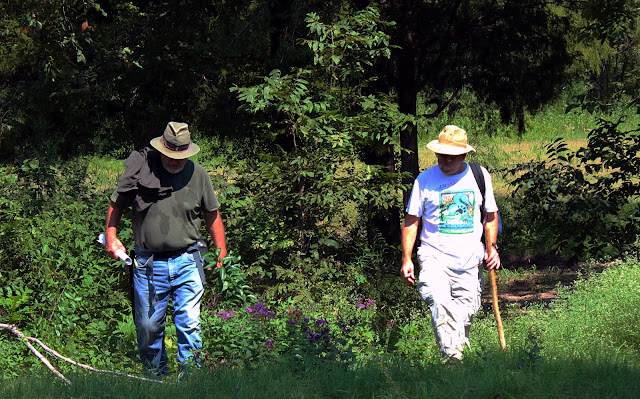 It’s here, down the slope and into the bottoms where the sounds of the city are completely gone. A dead silence where you can hear an acorn drop 100 feet away.

Down here distant bird calls can be heard a 1/4 mile away and an approaching breeze can be heard before it is felt.

Mr Pemberton has maintained the old family bridle path down to White Rock Creek for many years. It follows a series of old fence lines and water features before ending up at the banks of White Rock Creek.

Down here in this remote area the animal prints far outnumber those of people. 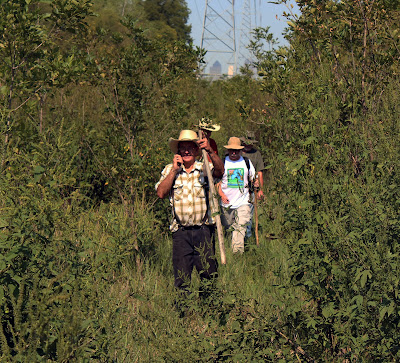 The hike here is an easy one from the spring to White Rock Creek. Seen in the picture at right with Downtown Dallas in the background, a companion route could be easily made from the existing Rochester Park / William Blair trails. White Rock Creek has a man made boulder crossing currently in place along the right of way here that makes for an easy dry hop-skip-jump across.

Below is a short clip of the White Rock Creek crossing looking upstream. Rochester Park is on the left, Billy Ray’s trail would be to the right.

I noticed that one part of the 2012 Bond Package up for vote in the coming November 2012 election is a proposal to build a 100 foot deep, 30 foot diameter storm drainage pipe which would drain much of East Dallas and Uptown storm water into White Rock Creek. The video below notes the outlet for the stormwater as the White Rock Creek Outfall.

I cannot find really anything about it online other than this recently posted Youtube video. It gives one pause about what lies in store for Lower White Rock Creek, the Great Trinity Forest and the historic places we visited in this post. It sounds like the floodwaters that originally would have entered the Trinity in the Mill Creek, Turtle Creek and Peak Creek drainages from Uptown through the Arts District, M-Streets, Baylor Hospital and Fair Park, would reroute through Rochester Park and Pemberton Hill.

I wonder where the outflow would be located. Scyene, Second and Bruton all have low bridges that are somewhat prone to flooding during heavy rains. Seems more likely that if an outflow location were selected it would be further south near US 175 or in Rochester Park.

Seems like an ambitious project to relieve certain areas of town from flood waters like Baylor Hospital’s emergency room. The cost will manifest itself where all this extra water ends up.

A special thanks to the Pemberton family for hosting this event. Their knowledge is something you cannot find in books, online or through a television. It has to be seen and witnessed for your own eyes to appreciate. SYOTT- See You On The Trail