Sharrows are what cyclists call them. Shared Lane Markers, Cycling Chevrons, Yield To Cyclist Markers, they go by many names. A symbol that resembles a bicycle under a roof, stenciled into the road. If you work in Downtown Dallas or frequent Deep Ellum you might have seen them spring up overnight on Main Street, Lamar or even MLK Blvd south of the Fairgrounds.

Dallas has an ever growing infrastructure of dedicated bike paths spread around the city but they all exist in fractured states separated by miles of roads in between. One way to band-aid these trails together is a connect the dots approach using painted icons on the pavement. In theory the stencils generate awareness for cyclists using the roadway. Some critics argue that riding in the road is already a right-of-way right for cyclists in Texas and that the stencils are not needed.

Riding these streets is nothing new. If anything its a throwback to over 100 years ago. One of the earliest bicycle shops in Southwestern United States and one of the first in Texas was Ludwig Rudine’s Rudine and Company bike shop at 2613 1/2 Elm Street in Deep Ellum. Ludwig was a horseless carriage mechanic by trade and transitioned into bicycles then motorcycle service. At the time, bicycles were a popular means of travel in Dallas. Bicycles outnumbered passenger vehicles for a brief period on the streets of Dallas in the early part of the last century before vehicles became more common. As the time, the city of Dallas barely even reached the Fairgrounds, Cedar Springs or even Lemmon Avenue. A bicycle was an easy and quick form of transportation. As the city grew, trolleys and then vehicles took over.

The plans are to build out stenciled marked streets in connecting loops through Downtown and out Main Street to Deep Ellum/Fairgrounds, another out Lamar Street. Looking around, so far the stenciling exists in the following places:

–Main Street from Lamar all the way through Deep Ellum to the southern terminus of the Santa Fe Trail at Hill Avenue. Getting to the Fairgrounds this way is still somewhat of a jump requiring a ride down Haskell, which is one way. A better route is to ride down to Exposition and Main, ride Exposition to Fair Park.

The goal here is to connect the Katy Trail with the Santa Fe Trail. Doing so would balance two trail systems that have loose ends hanging off to the south. Both are great multi-use paths that if joined together would form a spine of future bike paths.

The north end of the Santa Fe Trail terminates at a bridge over Winsted where it merges with the White Rock Lake Trail known as the SoPa, the Southern Pacific Trail. Like the Santa Fe and Katy Trails, this paved path was built in 2000 over an existing rail bed that once ran from Tenison Golf Course to Presbyterian Hospital. Given the 911 Marker Code “SPT” it will retain a different name than the newly created Union Pacific Trail currently under construction from Mockingbird to Northwest Highway.

This newly minted trail still under construction will meet with the Katy Trail Phase IV near the Ridgewood Recreation Center, then continue to the north up through Vickery Meadow. To the south it will tie into White Rock Lake near the Fisher Road Parking Lot.

–Katy Trail down Lamar to the Convention Center is another marked route. This is another decent route that opens up quite a bit once you pass the Convention Center. Headed out this way it’s only a five minute bike ride or less to the Santa Fe Trestle Trail. That route, which is unmarked would be Lamar to Cornith, south on Corinth to Riverfront(Industrial Blvd). Hang a left at the big plastic Longhorn.

–Martin Luther King Blvd south of the Fairgrounds is the first shared lane street in Dallas. The stencils were placed in April and May from the MLK entrance of the State Fair down to US 175.

I thought if there were ever a street that would see the most oil, bus tracks and road grime on it capable of removing stencils, MLK would be the road to do it. In the four or five months that the stencils have been in place they all still look brand new. MLK has a funky lane layout, almost a 60/40 percent lane separation which puts the driver side wheel directly over the stencil. So far, so good.

Heading out the south entrance of the State Fairgrounds the bike stenciling ends at US 175, a few blocks short of Lamar and the MLK/Forest Avenue/Cedar Crest Bridge. I’m not sure why the stenciling ends here but I think it should be extended to the approach of the bridge. The MLK/Forest Avenue/Cedar Crest Bridge has a great sidewalk across it and is the route I always lead bicycle groups across when visiting the Great Trinity Forest and the Standing Wave project.

I’m not a fan of riding down MLK Blvd. One of the few vibrant streets in South Dallas, the roads and parking lots are usually crowded with cars. I prefer Grand Avenue or Pennsylvania as better alternate routes headed out of the Fairgrounds. 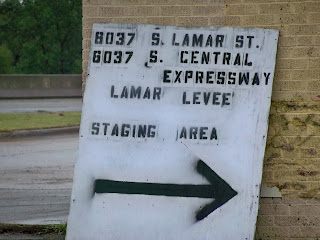 One new construction project that might make the Great Trinity Forest accessible from the State Fairgrounds area is the Lamar Street Levee Project. I have asked a few people if the final project will allow for recreation activities like hiking, cycling and horseback riding. I got a yes, a maybe and a hold your horses for answers.

Hard to see the signs that construction has started. Tucked in between the Tiger-Tiger Boozarama Liquor Store and the Chicken Shack is a new sign noting the construction entrance.

The Lamar Levee shown above will tie into the current Rochester Park Levee near Bexar Street and then run up the south side of the train tracks to the DART rail bridge near downtown. I have not seen much construction yet other than a fenced off staging area behind Tiger-Tiger on South Lamar and the test drilling site pictured below. 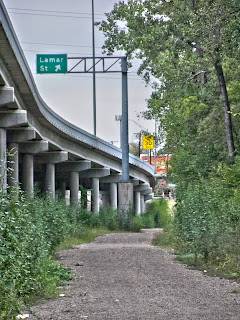 The drilling site sits east of the Highway 310 Bridge and west of the train trestle in Rochester Park. This sits just west of the historic old Miller’s Ferry crossing. The new road here cut into the woods just above the riverbank is not long just a couple hundred yards and serves as a test site for soils underlying the future levee site.

It has always been a problem getting around the industrial areas and metal recyclers on Lamar. If the levee offered a workaround the circus there, it would really open up Rochester Park/Blair Park to more people seeking recreation.

Birds of September — Tropical Bird Redux On The Trinity