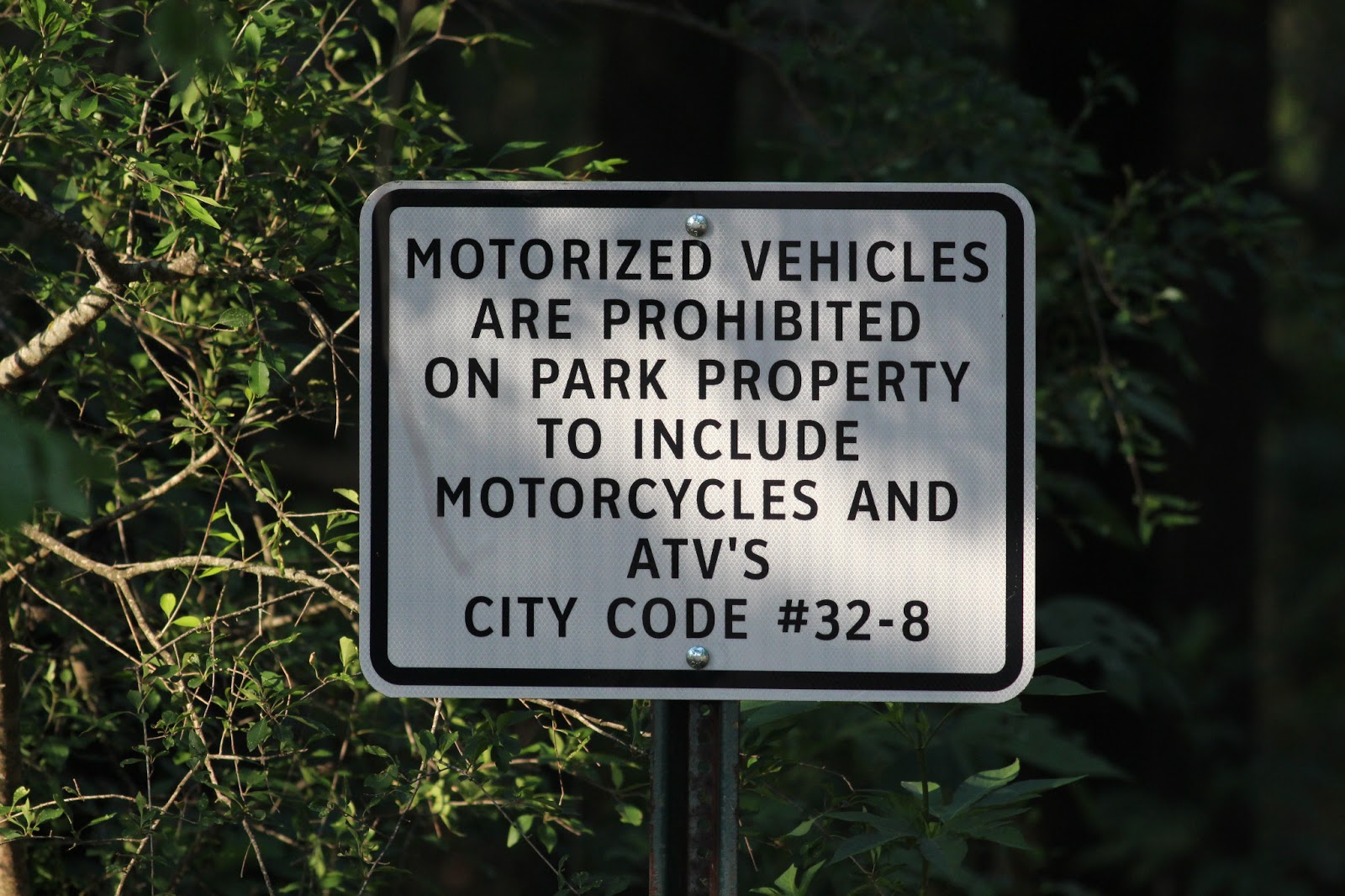 –1/3-1/2 mile of Concrete Trail and mixed surface trail around perimeter of pond
–2 mile Double track trail linking this park with McCommas Bluff Preserve(no motorized vehicles allowed)
–Horse Trail through woods a poorly constructed mud pit that loosely follows the Trinity River from the I-20 trailhead towards McCommas Bluff and peters out behind Lincoln Memorial Cemetery.

Across what is now the mid-west United States in the late 1830s and early 1840s, there was an over abundance of labor, scarcity of money and farmers were unable to sell crops for a good price at market. Nearly all citizens were engaged in trade and bartered for goods and services with little chance of turning a buck. The high rate of unemployment in the states like Illinois, Missouri, Iowa and Tennessee had people looking for new places to grow roots and build a new life. For many residents, Texas fit that bill.

Quite a few Americans got a good look at Texas real estate firsthand either through the service during the Texas Revolution or from the Mexican War a few years later. One such Mexican War veteran and Illinois resident was Allanson Dawdy. Born in 1826, he left home at the age of 20, in 1846 to join the United States Army under command of Colonel JJ Hardin. Men from all walks of life were brought together creating a volunteer army from laborers, farmers, blacksmiths, lawyers and doctors. They saw action at the famed Battle of Buena Vista against General Antonio Lopez de Santa Anna himself, in what has become one of the most well known battles of the Mexican War. Dawdy, a young man of 21 liked what he saw in Texas and after his military service planted roots here in Dallas County. His name, now misspelled as Dowdy became the namesake of one of the most well known roads in Dallas, Dowdy Ferry Road.

The parkland here was first settled by William Shelton in the 1840s, an Illinois veteran from the Mexican War. The bluffs carried his name, Shelton’s Bluff until shortly after the Civil War. In 1850, he married into the Dawdy Family who ran a ferry service on the Texas National Highway across the Trinity River downstream a few miles. Pronounced “Dowdy”, the misspelling took and Dowdy Ferry Road is now over the old Texas National Highway route.

Together only three families, Beeman, Shelton and Dawdy owned most of the land along the Trinity just south of what is now Fair Park to Hutchins, in what was then Nacogdoches County in the Republic of Texas. The McCommas family purchased the Shelton land after the passing of William Shelton. The name Shelton’s Bluff stuck through the Civil War, eventually changing names to McCommas Bluff on maps in 1880.

Illinois native Allanson Dawdy (1826-1901) came to Dallas County in 1847. By 1854, he was granted a license to operate a ferry at this site on the Trinity River, the southernmost crossing at the time in Dallas County. An important route for citizens living on both sides of the river, the ferry continued in operation until about 1880. Ferry charges included one dollar for a wagon with four or more animals, ten cents for a man and horse, and five cents for a person on foot. The first permanent bridge was installed at this site in 1888.

Now spelled and pronounced Dowdy Ferry, the road and bridges bearing the name form a wide arching loop from Pleasant Grove towards Hutchins. 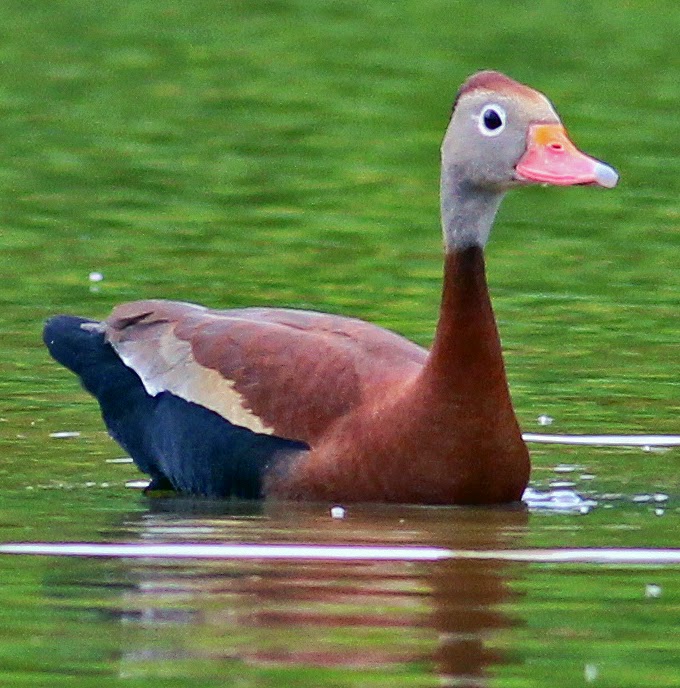 It’s a rare sighting for Dallas, tropical Black-bellied whistling ducks, also known as black-bellied tree ducks, are odd birds and an odd sight. Taxonomists categorize them closer kin to geese than true ducks. They don’t dabble. They don’t dive. They wade in shallow water with their spindly legs and use their long necks to bend over to graze on grasses and aquatic vegetation.

Beautiful in flight, these dark chestnut-brown birds have bright-white wing patches with a pinkish-orange bill and feet that hang behind them. Hens and drakes share similar patterns with a slight deeper contrast in color for the drakes. While flying, they can not be confused with the buff-colored fulvous whistling duck also found in the same regions – or any other duck, for that matter.

These birds are found in great numbers across Central and South America where, in some locales, they are referred to as “Cornfield Ducks” as they plague grain fields and are treated as such. In the US, their range is limited to the southern limits of the Gulf Coast states, though wayward birds have been found in northern states. Their population is actually expanding north and why they are now infrequent visitors to the Trinity River Bottoms. 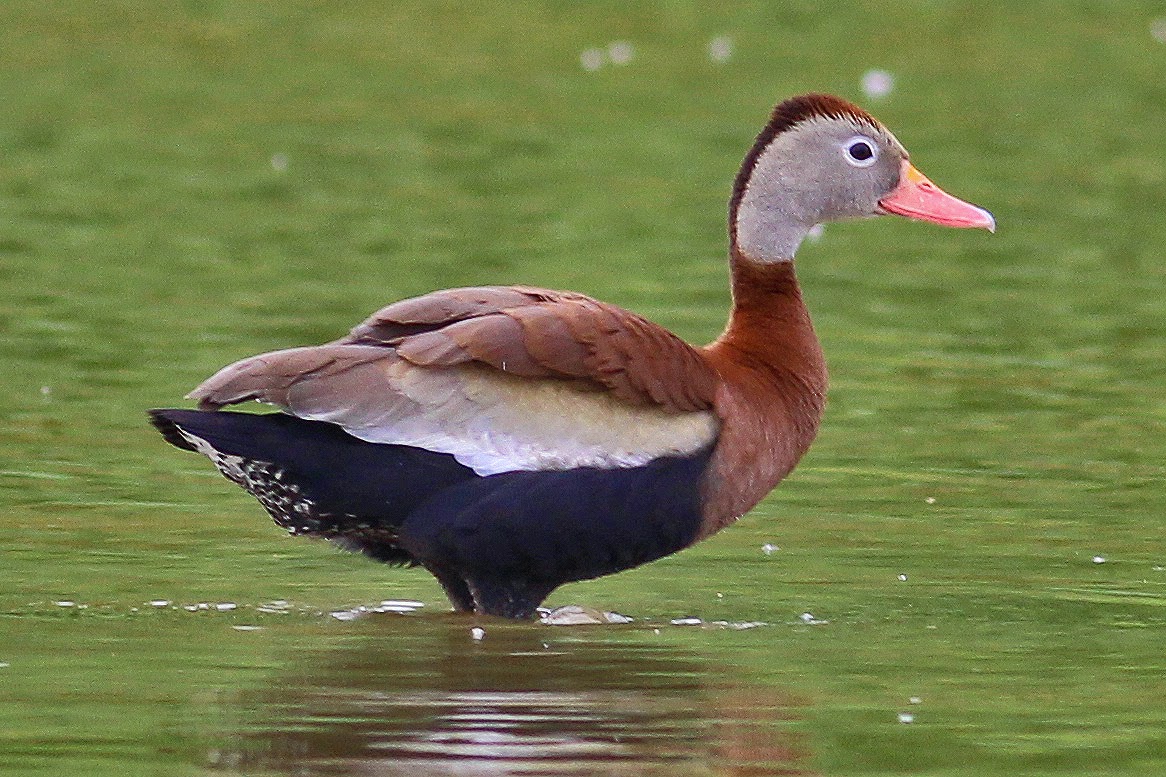 Whistlers don’t migrate, in the true sense of waterfowl, but they flock up in groups to travel back and forth across their range. As the moniker “tree duck” implies, they nest in holes of trees, and their webbed feet have needle-sharp talons to help them perch on branches. There’s also a reason they are known as whistling ducks. They are very vocal; their peeping whistling while in flight betrays their approach.

Another seldom seen bird in the DFW area is the Tri-Colored Heron formerly known as the Louisiana Heron. Up until several years ago their range was thought to be that of Southeast Texas, Big Thicket and the huge expansive swamps of the Gulf Basin. If you know where to look, you just might find one in the Great Trinity Forest.

The Tri-colored Heron is a medium-size wading bird named for its three main colors: bluish-gray, purple and white. Its head, back and wings are a dark bluish-gray. The back of the neck is purple. The belly is white. The Tri-color also has a narrow white streak with delicate rust-colored markings down the front of its neck. The eyes are bright red. The legs are pale green or yellow. The bill is usually yellow at the base and has a dark tip 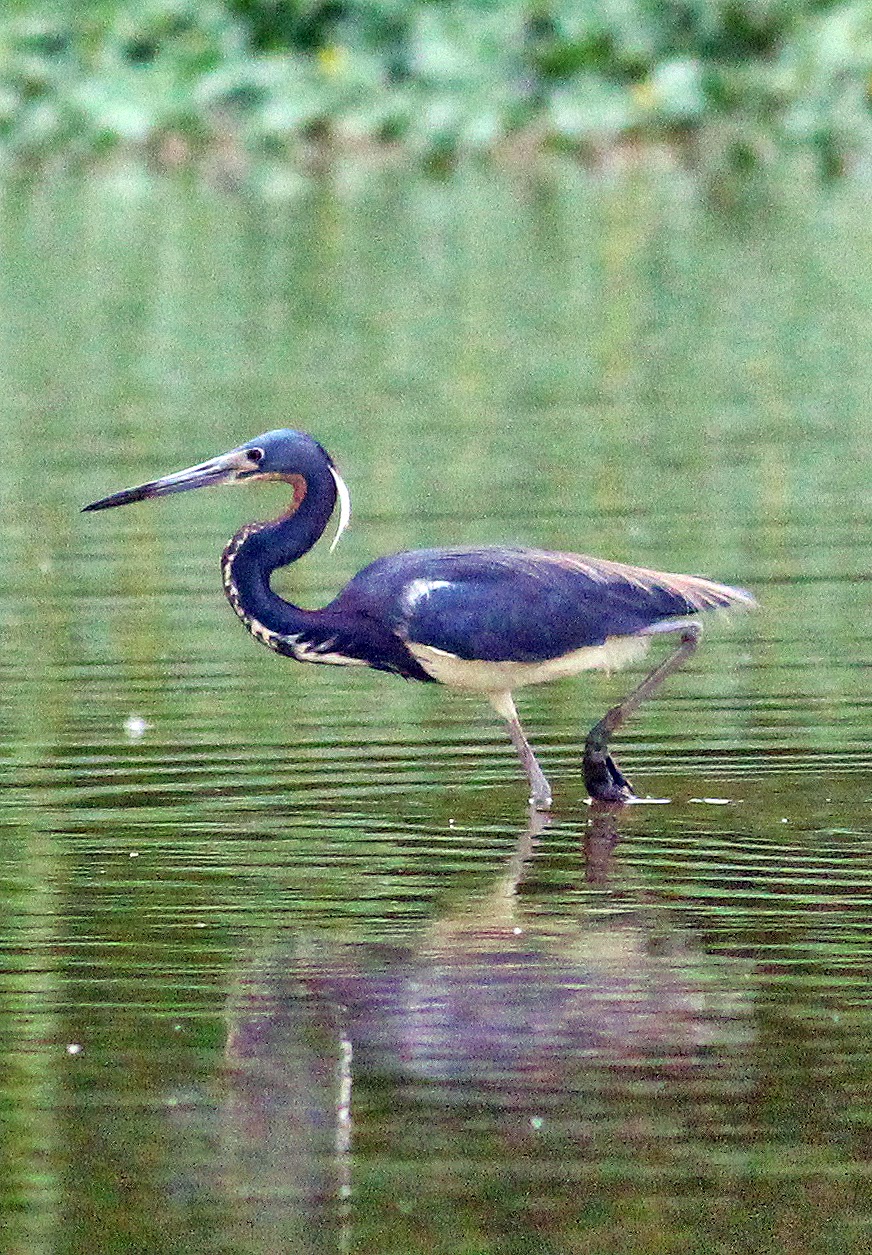 Foraging in open or semi-open wetland areas, the tricolored heron tends to hunt in deeper water than other heron species, feeding mainly on small fish but also eating insects, crustaceans and frogs. It uses a variety of hunting strategies, including standing still, patiently waiting for prey to come within striking distance, and a running pursuit with the head held low to the water and the bill stabbed at prey with an almost horizontal action

The Tri-colored Heron is more active than the larger herons. This bird does not patiently stand and wait when feeding. It walks through shallow water in a darting fashion, crouching and weaving as it moves along. Sometimes it raises its wings to cast a shadow on the water so it can spot its prey. It lunges and prances, then shoots its bill into the water to catch a fish or an aquatic insect.

Video footage of Tri-colored Herons feeding and nesting last year in Dallas, Texas just off the old river meanders near Inwood and I-35. The birds roosting here commute a short distance, about 1/4 mile to fish the ponds that line the floodway. 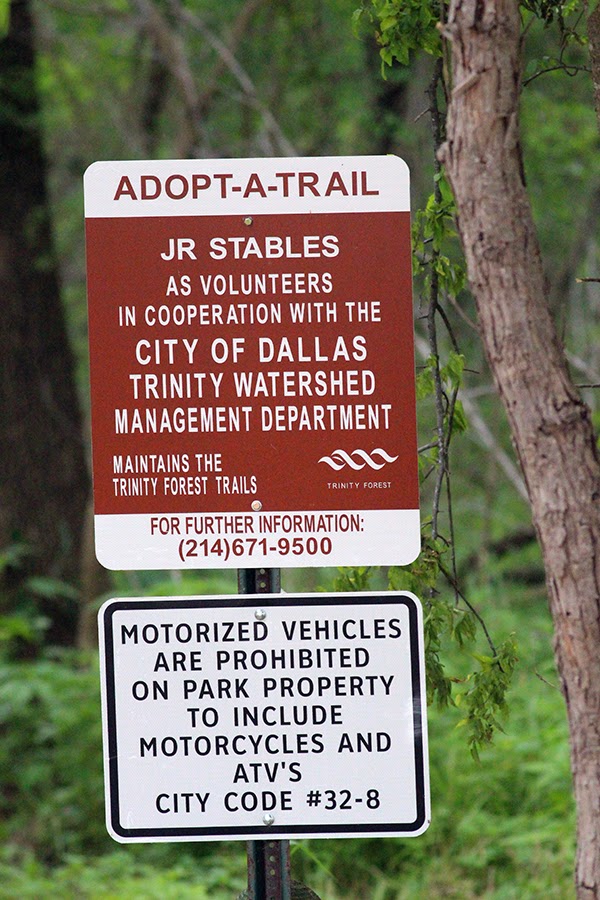 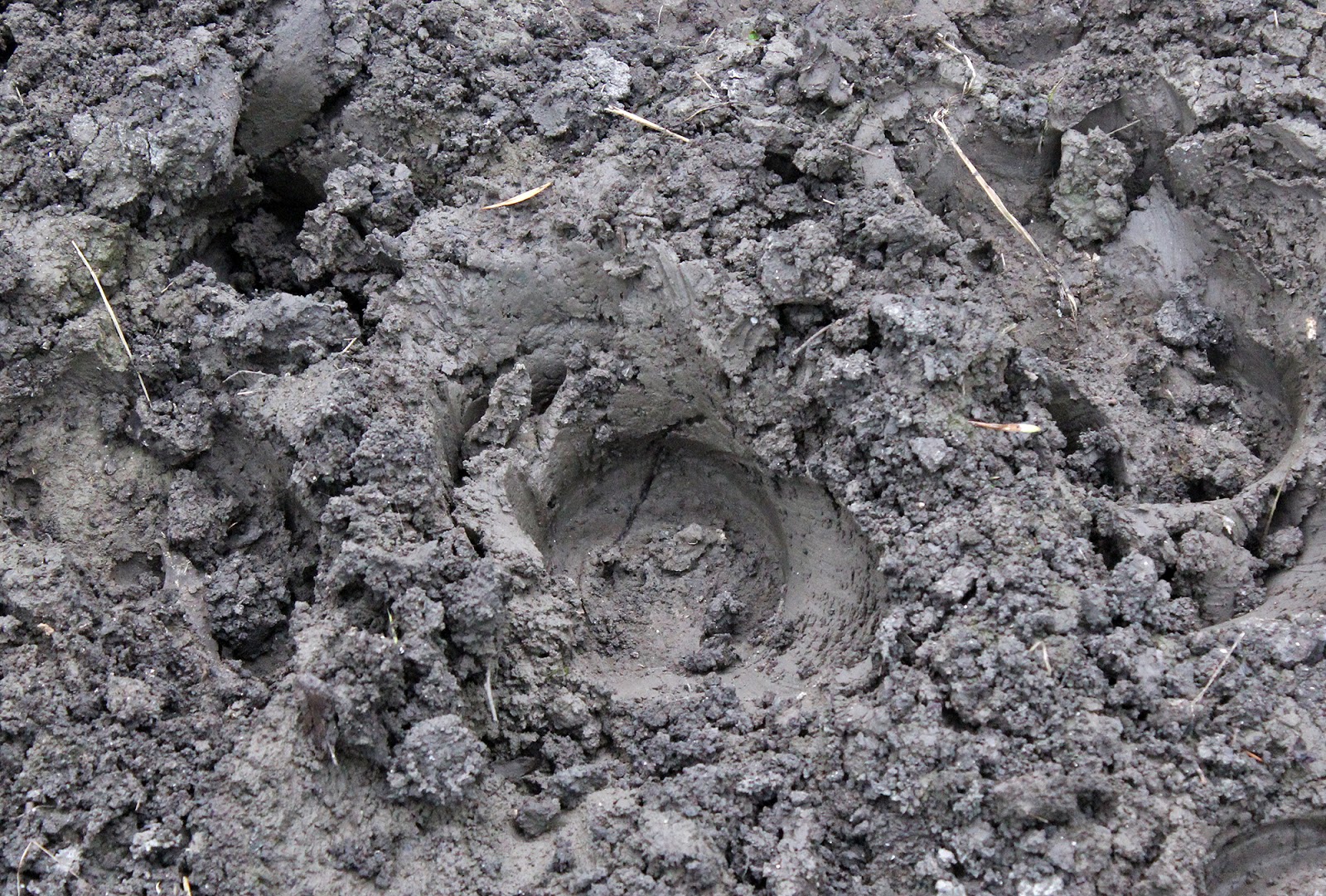 Much of the trail here is a scraped bulldozed path through the woods cut in the spring of 2013. Six to eight feet wide in most spots it’s about a mile and a half long. No formal signs exist and it loosely follows the Trinity River. From the parking lot the trail travels near due west till it reaches a high bank with a view of the mouth of Five Mile Creek. 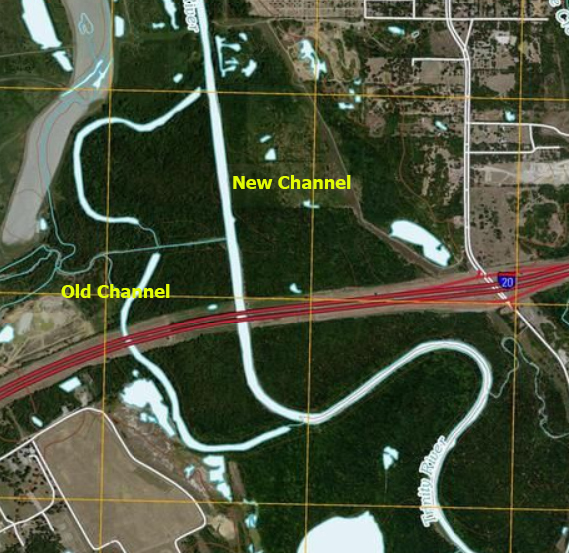 It sits off the “new channel” of the Trinity, a channelized section of river that was straightened in the 1970s for a planned inland barge route that never materialized.

The woods here are a rather remarkable stand of Ash, Pecan and some large Bur Oaks. The Virginia Wild Rye has just about gone to seed as of this writing in late May and will soon turn from brilliant green to a uniform color of khaki brown.

The trail itself was built slightly below grade. When scraped/bladed the trail was a natural depression which tends to hold water for extended periods. A year ago I remarked on my blog about the problem and thought one good overbanking flood or two would turn it belly up and ruined. Still waiting on that big flood.

Allanson Dawdy who founded Dowdy Ferry and many of the old pioneers never built horse trails and roads through this area for they knew that with any rain, the clay mud becomes an unworkable mess for weeks on end. The old timers picked the high ground, up in the sand and out of what we now call the hundred year flood plain. Old stories of hunters and fisherman in this area never mention horses, it was always traveled on foot.

Somehow we as modern day Dallasites forgot this lesson and as such created a problem with no good solution. Food for thought if anyone else has a hankering for building horse trails down yonder.

Out of the dozen horses at the park that day, only one ventured down the trail. The rider came back in five minutes and yelled “No Bueno” to the rest of the horseback riders. They were frustrated but understood that it’s not worth injuring your beloved horse on a poorly built trail. They hit the dirt road up to McCommas Bluff instead. 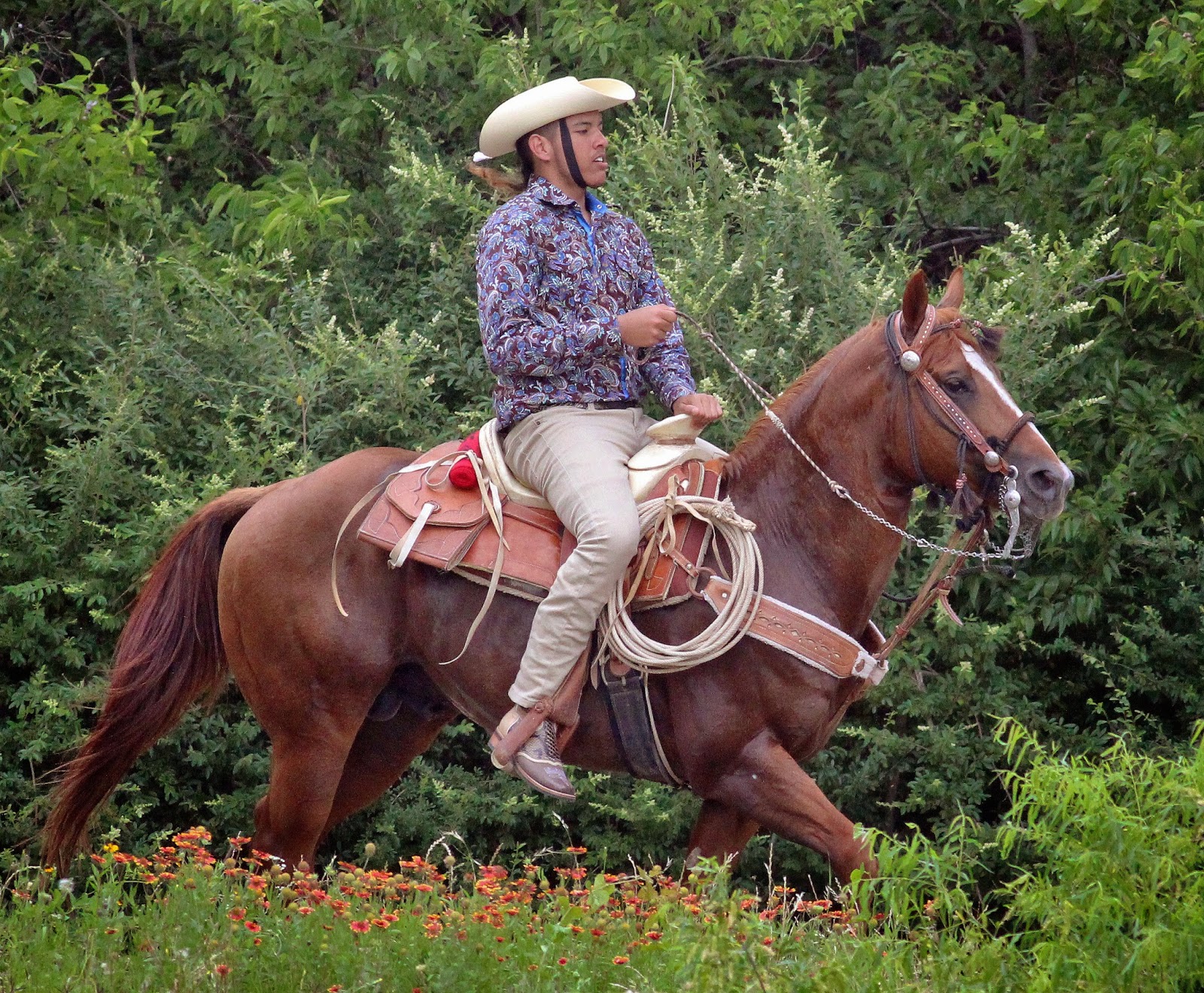 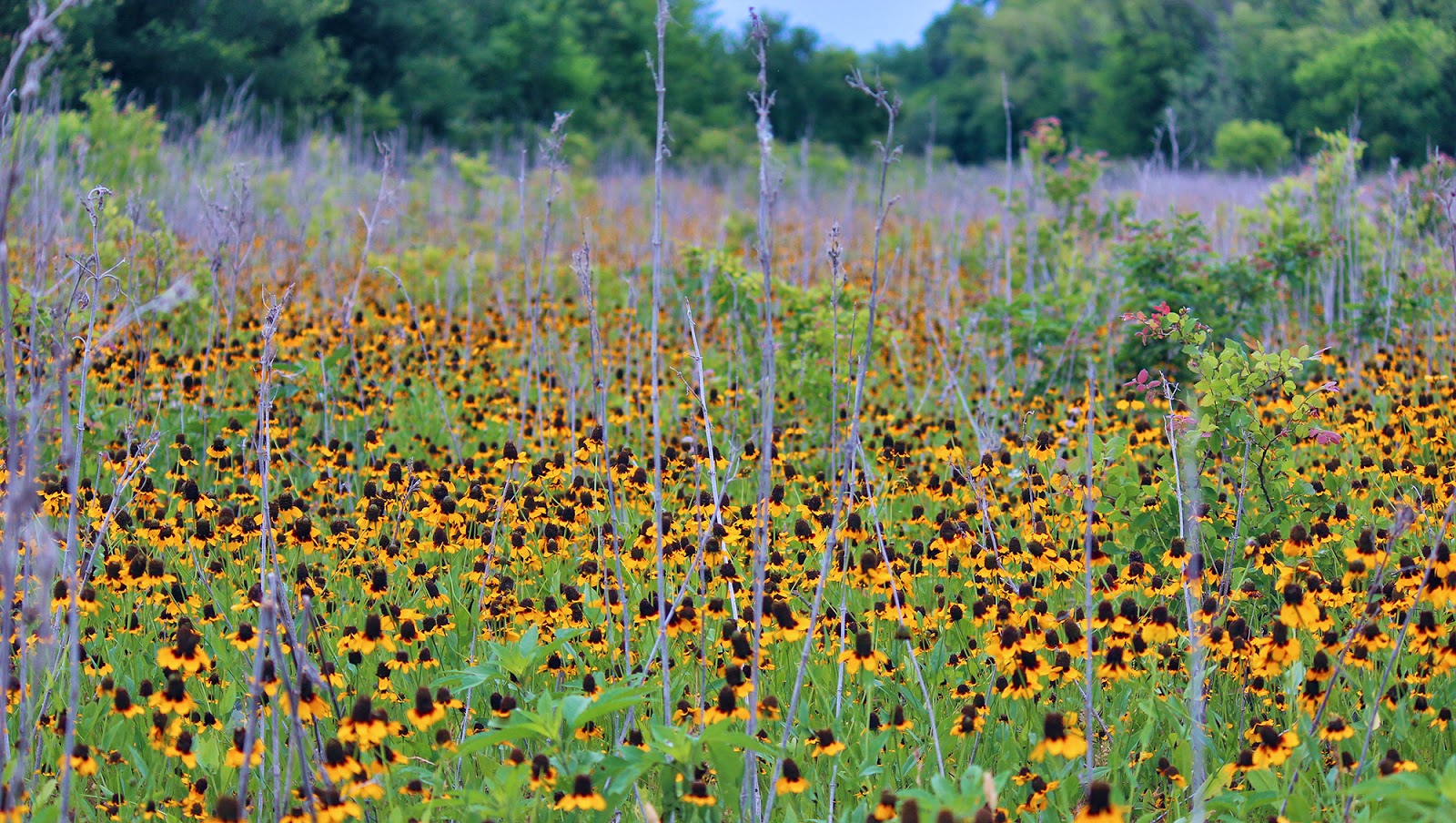 The road here is actually a right of way for a utility sewer line that sends sewage down to the wastewater treatment plant in far Southeast Dallas near the community of Sand Branch. 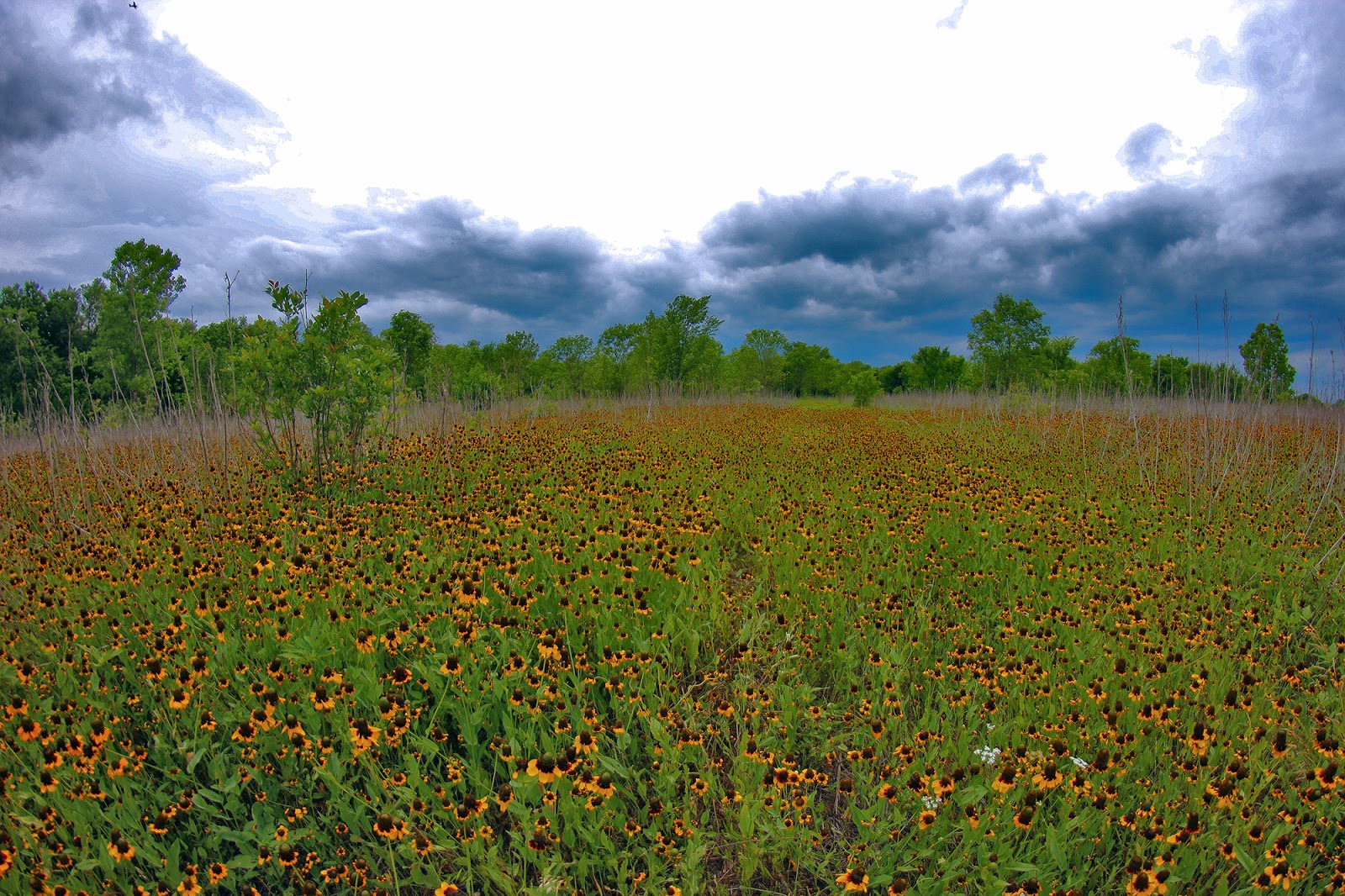 The open vistas of immense horizon-to-horizon coneflowers are an impressive sight this time of year. Soon the Giant Ragweed will takeover, growing to impressive heights of 8 feet or higher through this area. This same ROW if followed through McCommas Bluff Preserve will lead you across Elam Creek and will link up with Phase II of the Great Trinity Forest Trail just north of the pedestrian bridge across the Trinity near the Audubon Center.

Known by a number of common names, lemon beebalm is a 1-2 ft annual with unusual, tuft-like, lavender to pink, spiked flower heads. Each elongated spike is punctuated by whitish or lavender, leaf-like bracts. Several stems grow from the base and are lined with pairs of spear-shaped leaves.  Horsemint has a distinctive citrus or lemony scent when the leaves are rubbed or crushed

There must be at least 3-4 distinct subspecies of lemon bee balm aka Horsemint in the Great Trinity Forest. Some stands near Joppa Preserve are larger, rougher and nearly white, while others near Scyene Overlook have a deep purple appearance. The Dowdy Ferry Park is somewhere in between the two. All attract butterflies, hummingbird moths and bumblebees for the nectar.