The deepest part of the Great Trinity Forest lies here. One that is rarely if ever visited by humans. The lair of water moccasins, snakes hanging from trees, snorting feral hogs, spiders the size of your hand and chest high poison ivy. We were greeted by all of that fifty feet from the road. We had miles to explore beyond into the only known stand of palms growing in Dallas. A special and fragile place protected by impossible terrain and veiled secrecy on the location.

Dark. Even on the brightest of June mornings. The sun’s rays strain to reach under the double dappled canopies of mature pecans, walnuts and oaks. The exceptional experience is one that would one would think to be found afar from Dallas. Maybe Big Thicket or swamps on the Sabine hold such caliginous and musky spots. No. It exists inside the city limits. Fitting that such a place holds the most biodiversity in the Great Trinity Forest. One of the more unique species found here, an outlier species that defies the status quo is the Sabal minor palm.

The Sabal minor, the Dwarf Palmetto, is an understory palm generally occurring in low-lying, swampy habitats. Sabal minor occurs from Southeastern Oklahoma and Texas eastward to Florida and North Carolina. It is a wetland species that thrives in swamps, floodplains and backwater regions of the southeast where the land is often inundated by prolonged periods of water.

Three foot long flower stalks appear this time of year, covered with small, yellow-white, fragrant flowers  The flowers are followed by small berries that ripen August through October. The berries ripen from green to black on a branched cluster shorter than the leaves. Flowering and fruiting are not necessarily annual events, and some years see more abundant flowering than others. Even when flowering is abundant, fruit production is erratic; the causes are unknown.

Sabal Arecaceae constitutes sixteen species of palms that are distributed in the eastern woodlands and coastal plains of the Southeastern United States. Spanish explorers who landed on what is now the Gulf coasts of the United States immediately noticed the “palmito” or little palms growing everywhere. The “palmetto” name has since been applied in common names to these small palms. 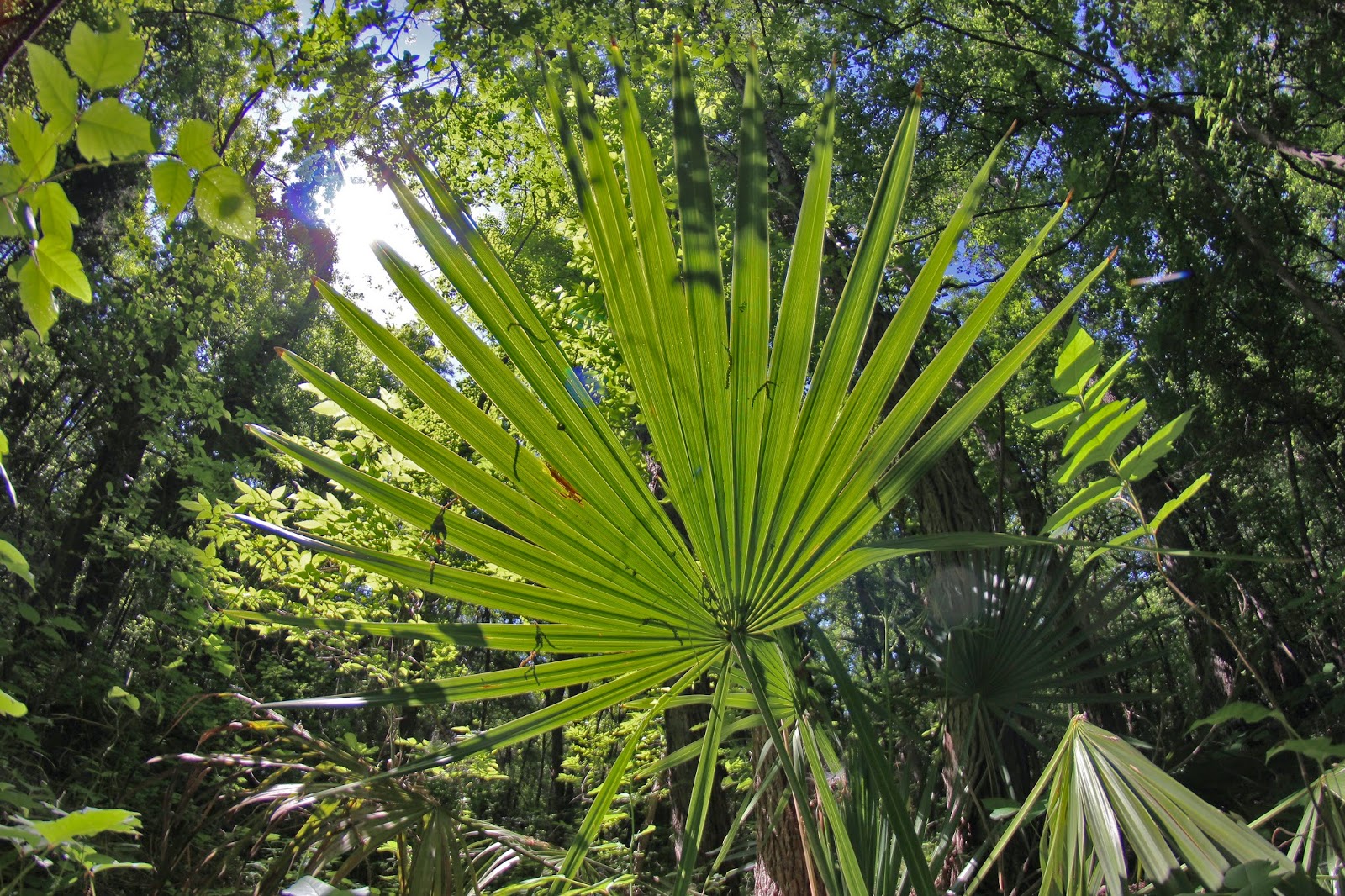 Sabal minor dwarf palmetto or swamp palmetto has a solitary subterranean(underground) stem and rarely seen above ground in North Texas with 4–10 dark green leaves. It is thought that the trunks are subsurface to aid in protection from freezing cold weather and frozen conditions. Hardier than many palms, these plants have endured countless cold snaps and ice storms that few of their southern counterparts will ever experience. These plants made it through some of the coldest winter weather conditions that North Texas has experienced in many years. The cold weather of December 2013 sent temperatures in Dallas into the near single digits for days. Cold hardy and the ability to thrive in extremes make the plants here a special and unique colony.

Years of fallen leaf litter, branches and storm debris cover the ground in this area. This type of wet and dark environment provides the ideal conditions for fungus species to thrive on the slowly decaying material.

A number of larger trees here have voids in them. Seen at left, a large honey bee colony has built a hive about 8 feet up in a cavity of a Bois d’ Arc tree. Many Bois ‘d Arc trees exist in this area. Tough and resistant to nearly all diseases, they can live centuries in the riverbottoms under ideal conditions. These trees prefer a slightly higher elevation just out of the immediate floodplain on slightly drier ground.

Other species of trees found in this area include pioneer species like ash and cedar elm.

The Red-bellied Woodpecker is a familiar year round resident of forests in the eastern half the United States  It is a bird of densely wooded lowlands and bottomlands, open forests and swamps. It too uses the voids and cavities of trees. The bee hive and the woodpecker seen in the photos here were taken within 100 feet of one another.

The goal for this hike was to push through the Sabal minor groves, ash bottom and pockets of heavy ragweed to reach the immense and large water bodies we hope will hold tropical wading birds later in the summer.

Lots of over banking events this spring have created ideal aquatic habitat and food for wading birds, snakes and frogs. Getting there requires wading through flooded aquatic grasses that are prime habitat for water moccasins and alligators. Called sedge, this aquatic grass in the lifeblood of environments like this.

In Texas, there are over 100 species of sedges and they are difficult to identify without using detailed botanical indexes. In general, sedges are perennial plants that resemble grass, grow in shallow water or damp soils, and can reach 3-4 feet in height. Sedges often grow in thick clusters called tussocks.

Submerged portions of all aquatic plants provide habitats for many micro and macro invertebrates. These invertebrates in turn are used as food by fish and other wildlife species (e.g. amphibians, reptiles, ducks, etc.). After aquatic plants die, their decomposition by bacteria and fungi provides food for many aquatic invertebrates. Sedges are considered good wildlife plants. Sedges are grazed by muskrats, nutria, and rabbits, while the seeds are consumed by waterfowl and small birds.

The sedge and willows break open into the bright brilliant light of a true swamp with beaver built islands, beaver slides, copses of willow studded islands and high tree canopies that line the water’s edge for hundreds of yards.

There is a certain recipe for attracting wading birds to bodies of water. The ideal conditions are lots of food, shallow water, good cover and a secluded environment from predators. This unnamed body of water meets all those criteria and more.

The difficult wading hike to make it here for a human is actually a great asset to one wanting to observe wildlife. Other bodies of water similar to this like Lemmon Lake in Joppa Preserve, require a long slow belly crawl across grass to reach the shoreline. Here, at this location, the dense treeline all but obscures a person for wildlife viewing up close.

High quality habitat like this is very rare in Dallas. It attracts birds seldom seem in other places in town. The area acts as an incubator for many animal species to raise their young, it was clearly evident that birds, especially the Yellow Crowned Night Heron had a nearby rookery.

Rough green snakes are typically found on forest edges near ponds or lakes. Although they are arboreal snakes, they forage in dense vegetation along pond and lake shorelines during the day. Nights are spent coiled in the branches of trees. Rough green snakes choose perches based on distance from water sources, height in branches, and thickness of the branch. 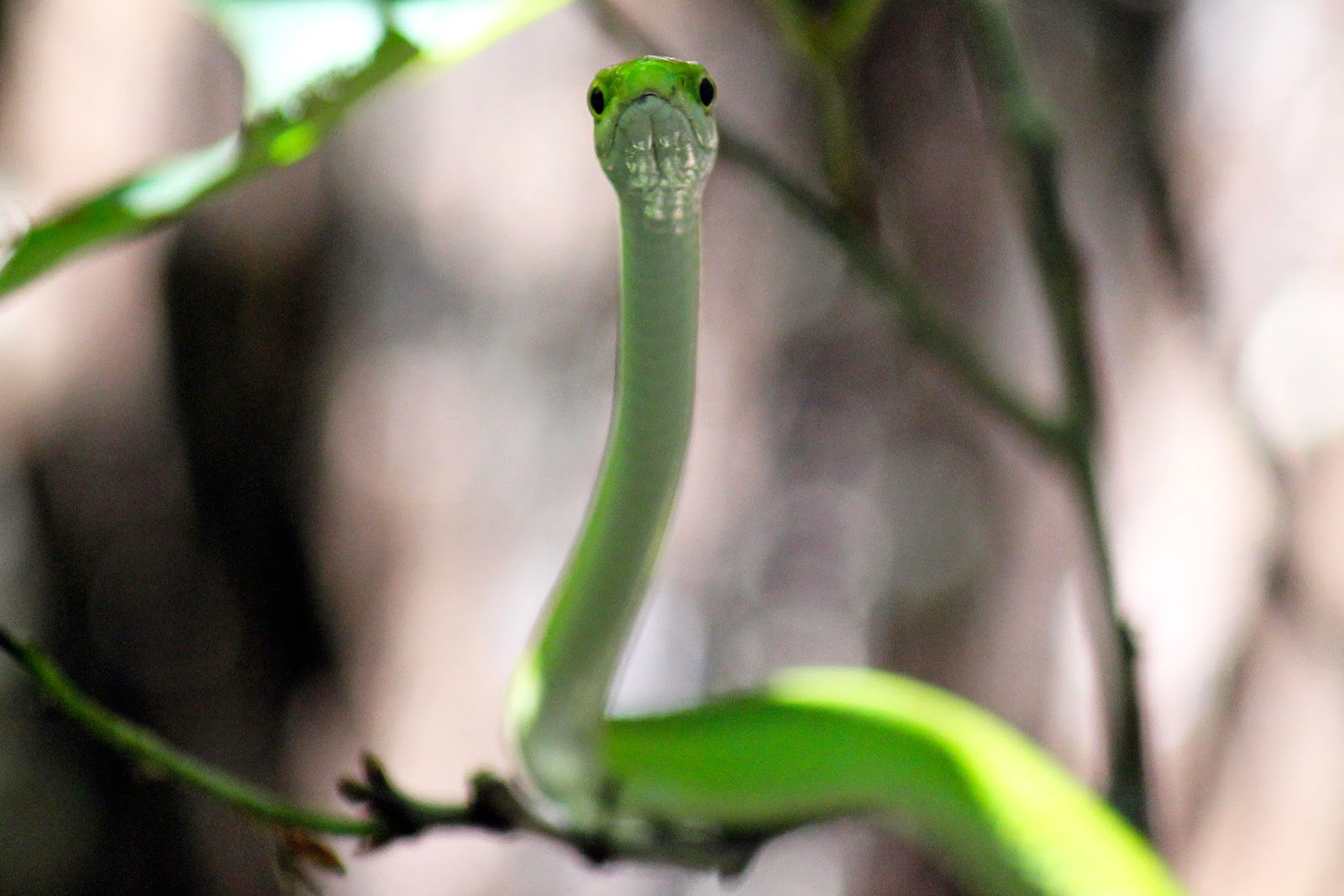 Some Birds Of The Swamp 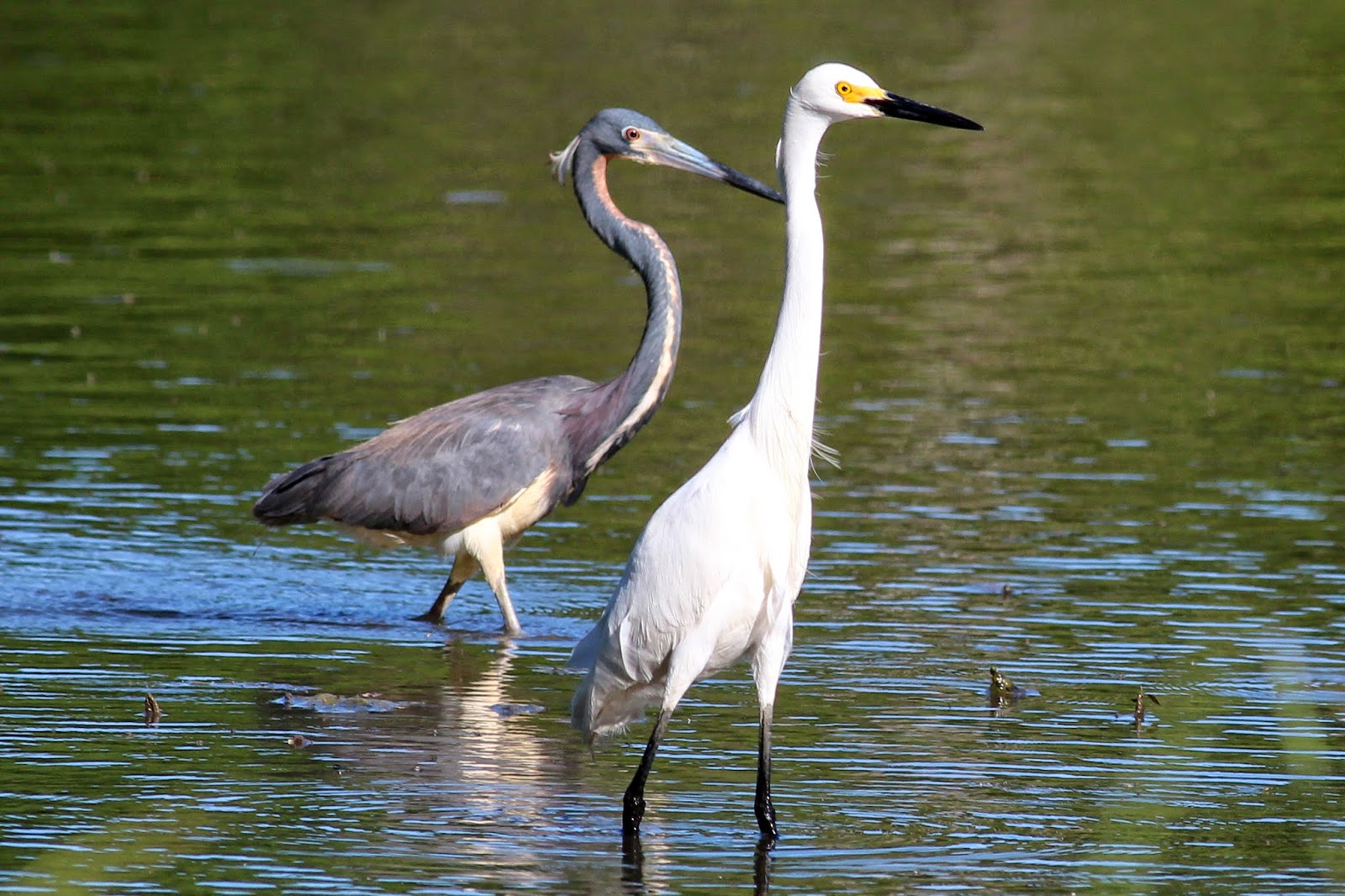 Three birds featured above, all wading birds of near similar size and height with all very different methods of catching prey.

Perhaps a decade ago, the sight of a White Ibis was a rare occurrence in Dallas. Same with the Tri-Colored Herons who, even today still exist on ornithological range maps as birds of the Gulf estuaries and Louisiana swamps.

This spot is so remote and so unexpected to have humans visit that we were able to spend a long length of time inside the shade of the trees observing not only the feeding habits of these birds but watching many of the birds fly directly over our heads and land directly in front of us, 20-30 feet away.

When foraging, the Snowy Egret walks upright with the neck slightly arched, and it flies strongly with deep wing beats, the yellow feet visibly trailing behind the body. It is an extremely vocal heron, particularly during aggressive encounters, when a characteristic “rah” call is emitted.The Snowy Egret will often shake their legs and feet, agitating the water and mud to stir up prey underneath.

The snowy egret is often confused with the juvenile Little Blue Heron (Egretta caerulea), but may be distinguished by the pure white tips on the wing feathers, the solid black bill and the bright yellow feet, which give the impression that the bird is wearing gloves.

The Green Heron is sometimes called the Green-Backed Heron. It is a smallish heron that is about the size of a large crow. It is a foot and a half to two feet in length. The Green Heron has a dark head with a small black crest. Its back and wings are dark gray-green to dark gray-blue. Its neck is rust colored. It has a dark bill and its legs are orange or yellow. Elusive little birds that are very hard to photograph in flight.

The Yellow-Crowned Night Heron is a migratory bird that resides here along the Trinity River in Texas  Unlike other night heron species, the yellow-crowned forages both late in the day and night. It forages much like other herons by wading through water waiting for its prey to come within striking distance. Also, unlike the great heron which many have seen standing motionless like a statue in many Texas waters, the yellow-crowned will stir up its quarry by wading briskly at the waters edge. With a quick dancing motion, the dagger like bill stabs its prey.  The prey of a Yellow-Crowned Night Heron normally consists of fish, frogs, grasshoppers, and occasionally snakes, but its primary diet is crustaceans. 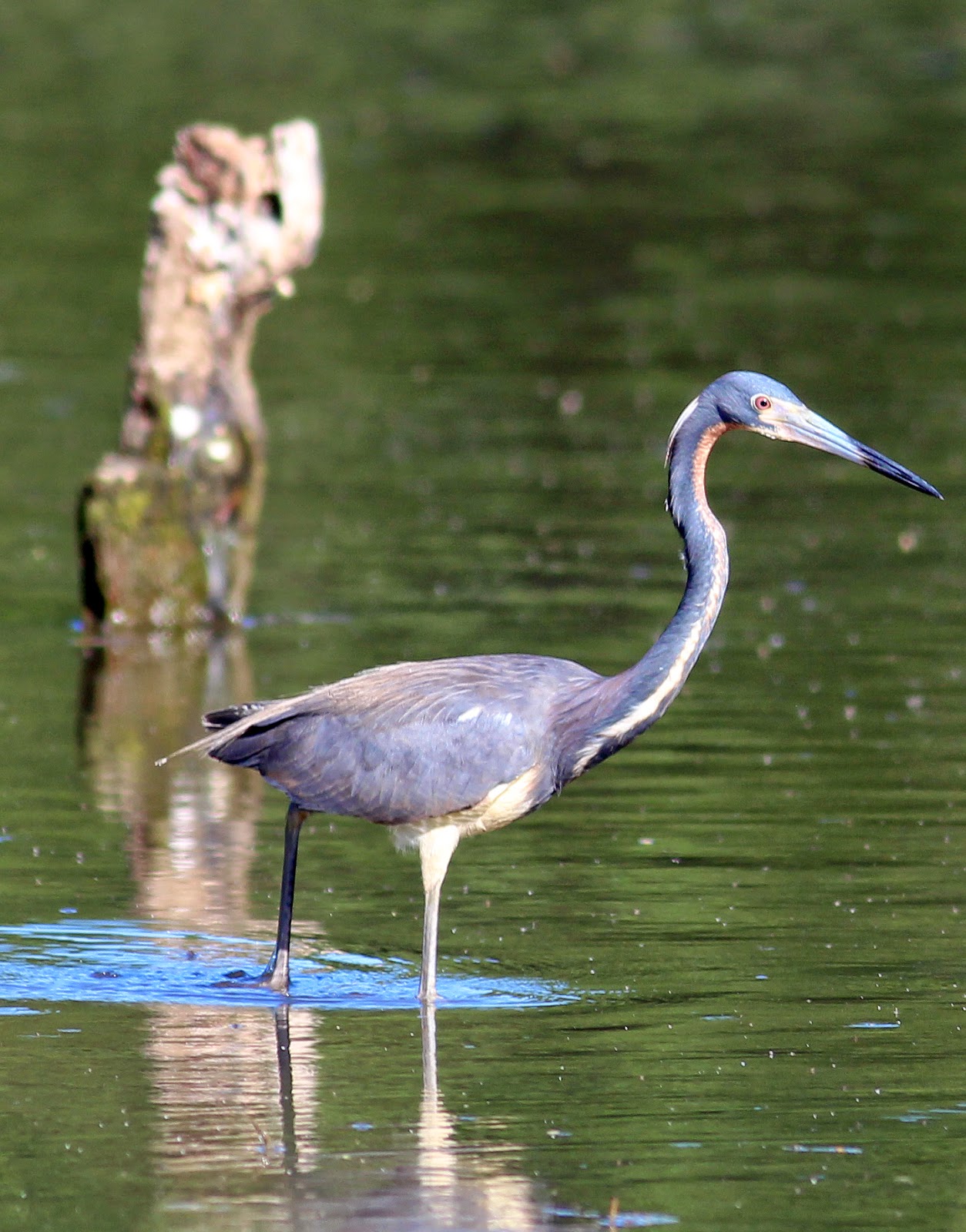 The Tri-colored Heron’s signature movements, aesthetic features and picturesque plumage draw it apart from the other birds. The Tri-colored Heron’s color is a slate blue/dark blue gray color. It has light greenish/yellowish legs and the color on the beak matches its legs. It also has a white stripe on its purple neck. The heron’s white belly gives it its unique identity. It is named the Tricolored Heron because of these three different shades. 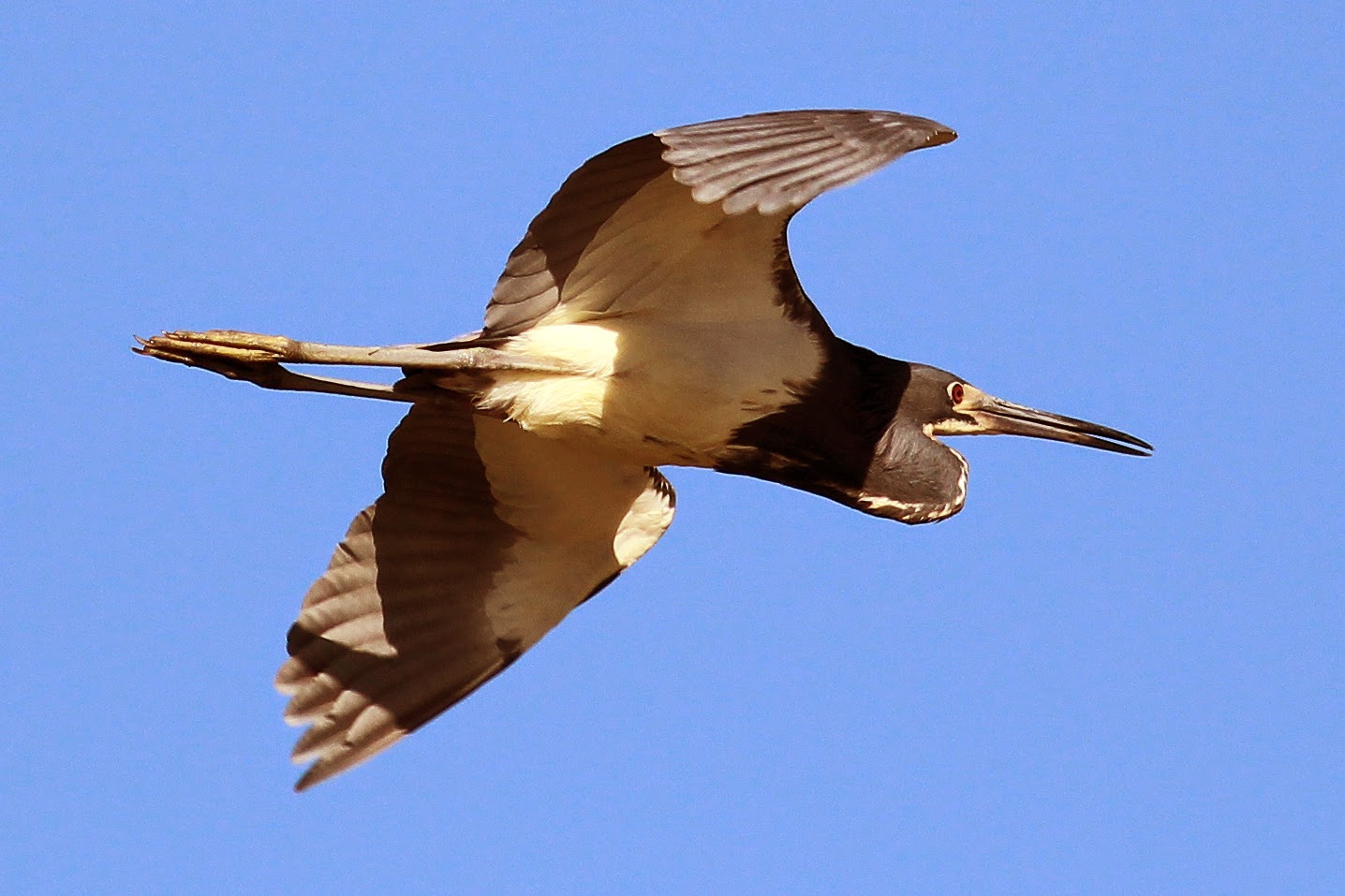 It is the only dark colored bird with a white underbelly in the heron family. The Tri-colored Heron usually measures a little over two feet in length and has a little over three foot wingspan.

Because they require shallow water for feeding, many white ibises are found in coastal, aquatic environments such as ponds and lakes or inland wetlands. White Ibises are primarily found in southern coastal regions of the Gulf states and during the summer and move inland after the breeding and nesting seasons. Called “dispersal”, the wading birds head inland from the coast in search of slowly drying ponds and beds. Because water depth is of the upmost importance for their feeding and reproductive behaviors, White Ibises may shift locations due to the rise and fall of water levels.