It was George Washington’s Birthday, February 22, 1912 that one of the most important events in Dallas history took place. The grand opening of the Dallas-Oak Cliff Viaduct now known as the Houston Street Viaduct. The whole city paused for an entire day to celebrate the opening. A two mile long parade wound through downtown Dallas, snaking it’s way towards the northern approach. A battalion of US Army horse drawn artillery led the parade. They promptly setup their artillery pieces along the river at the foot of the bridge and fired off a 21 gun salute.

The bridge itself was more than just another way to get across the river. It was the first permanent solution to crossing the flood prone Trinity in Dallas. It was also the first true permanent, all weather road link that joined Dallas and Oak Cliff.

The Houston Street Viaduct’s centennial is perhaps overshadowed in a literal and figurative sense by the newest bridge just upstream, the Margaret Hunt Hill Bridge. Exactly 100 years on, the excitement of the new Caltrava Bridge has muted one of the great milestone achievements of Dallas as a city. 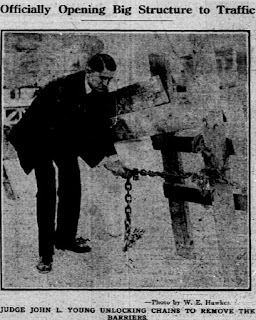 The Houston Street Viaduct was conceived after the devastating flood of 1908 separated Dallas from Oak Cliff for weeks. Many of the wooden and steel bridges of the time were wrecked in that flood, crippling commerce and travel across the river. At a cost of $621,000, the city approved bonds to build the new bridge. The bridge was designed by Ira Hedrick using a truss and arch design. The building material was locally available concrete mixed on site using water from the Trinity. Much of the gravel used in the concrete came from pockets of alluvial soil in West Dallas and around Fair Park. The bridge has over 50 arches, one of which is wider than the rest, about 95 feet. Through this channel the river flows. The wider arch section was designed for boat and barge traffic. It was originally designed for two lanes of vehicle traffic and two full sets of trolley rails. The rails were never installed. That’s why today, the configuration for 4 lanes seems a little off.
Like a Roman aqueduct, the Houston Street Viaduct should last another 100. There is a time capsule buried somewhere along the bridge that was supposed to be opened today, February 22, 2012. Maybe someone can find it and open it up at the next centennial in 2112.
The oldest structure still in place on the Trinity River is the old Santa Fe Trestle Trail. The stone bases of the bridge date from 1890, the bridge itself was installed in 1904. The blocks supporting the bridge were added at a later date to raise the bridge to the same height as the top of the levees, insuring that the tracks would never be underwater. It has taken the current contractor longer to retrofit the old bridge into a pedestrian/bike path than it took all the other construction on the bridge combined. 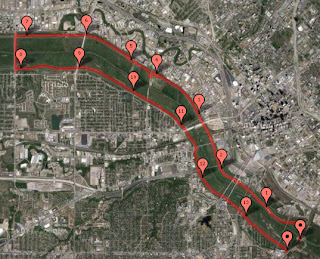 Hopefully the Santa Fe Trestle Trail will open soon. I understand a utility company needs to move some wires before that can happen. Once opened, a decent route on gravel exists from the Santa Fe Trail out to the old Westmoreland bridge and back. At 14 miles, it’s a decent distance for most people. Access can be made from some parking currently under construction or from the DART Station at Corinth and 8th. Disappointing to many people, myself included, that the Santa Fe Trestle Trail and Dallas Wave whitewater park have been shuttered for so long. Time to open it up…………… 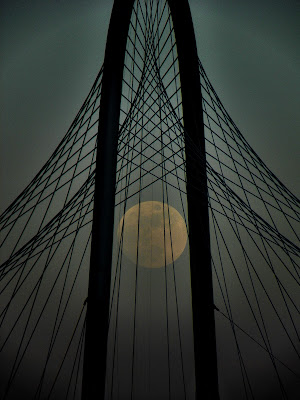