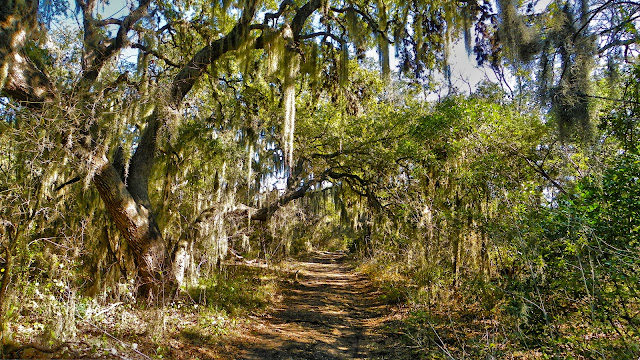 This is an epic to the historic, and still fresh in the minds of people, the mystic and fearsome Bois d’Arc Island a strip of land in the southern part of Dallas County, a couple of miles wide, and eight or ten miles long. Its area, up to recent years, was estimated all the way from ten to twenty times its actual size, because of the density of its timber and foliage, the game which abounded there, and the easiness of getting totally and irretrievably lost on cloudy days, or at night. –William Holford June 17, 1910

And that 102 year old article from the Garland News served as my only primer into the really strange world of Southeast Dallas County.

Here, the rules do not apply. What rules. No rules. No city politics. No laws. Welcome to unincorporated Dallas County. My previous visits to this part of the county were limited to a private gun lease on the river. I asked others what’s beyond the bend in the river? What’s on the other side? No one I know, knew. So I had to find out.

It was about the time the first European explorer laid eyes on North Texas that the Trinity River took an abrupt change of course. Cutting off a 14 mile stretch of the traditional stream bed for a more westerly course. The old riverbed became known as Parson’s Slough and the 22,000 acre area surrounded by the new and old river became Bois d’ Arc Island. 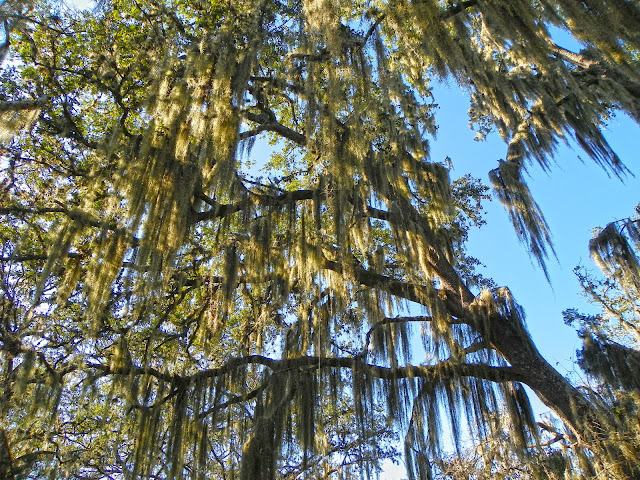 The map below from the turn of the last century shows the upper half of Bois d’ Arc Island. Goat Island Preserve would be due east of Wilmer on the map. 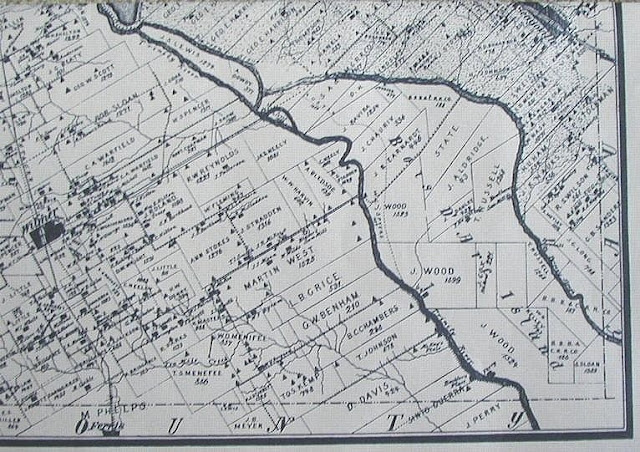 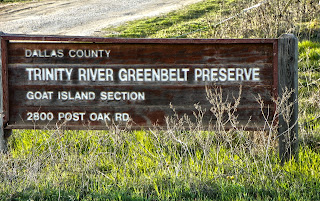 If you are planning a visit to Goat Island with the hope of seeing goats, keep driving! There are no goats on Goat Island. Two ways to visit. One is the preserve makeshift parking area located at 2800 Post Oak Road which is north of Beltline Road and East of I-45. The other is 4400 South Beltline Road. The Beltline Road parking can be done on the old approach to the Beltline Road bridge. Neither are really attractive options. Both the Sheriff’s Department and the Game Warden said it was OK to park on either approach to the old bridge.

Approaching the Post Oak Road entrance, you’ll notice the extensive gravel mining operations underway around the area. Much of the land is owned by Trinity Industries and they mine different sections of land depending on customer demand. Each area has a variety of soils or gravel sizes.

Talking to a few other people who have been to Goat Island, the first subject brought up is “So what in the world do you think is going on with that house?” 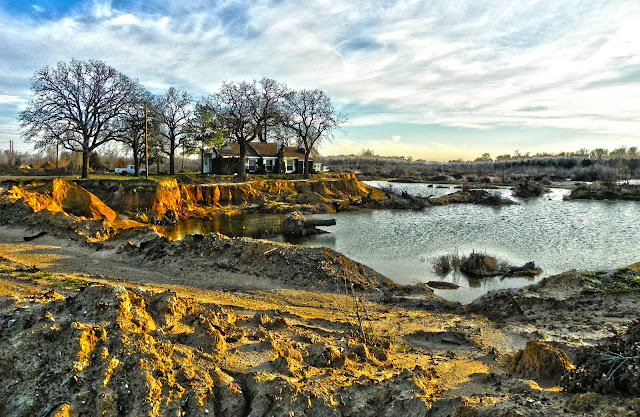 The house sits directly across the street from the Goat Island Preserve. Surrounded on three sides by heavy gravel pit excavation, it now sits on a postage stamp spit of land not much larger than the footprint of the home itself. It makes you scratch your head in amazement. A Sheriff’s Deputy I met down there as I was taking this photo said it was not surrounded on three sides, it was surrounded on all six sides. If there was such a thing. I wonder if the sands and gravels under the land there are really worth enough to allow something like this to happen.

Goat Island Preserve is comma shaped or like a kidney bean. It has a number of gravel and soft surface 4×4 roads and single track hiking/biking trails that meander through the woods from NW to SE towards Beltline Road. Some of the paths are on an old levee road built in 1920. 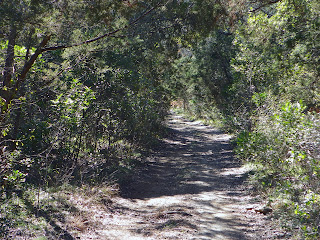 There might at one time or another been an actual working livestock farm here of some kind. I found a couple old concrete foundations near the Post Oak trailhead that were probably related to commercial farming of some kind. 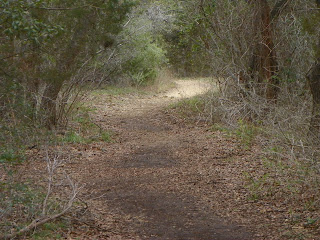 The trails vary quite a bit depending how close you are to the river. Some of the lower 4×4 roads stay muddy year round due to the high water table in the area. 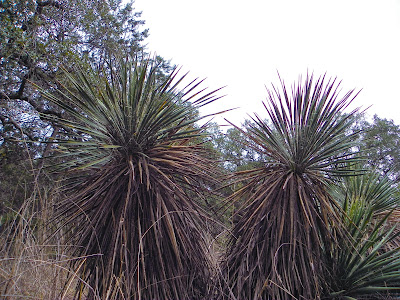 I think these are either Beaked Yucca or Blue Yucca plants. Standing about 8 feet tall among the live oaks and prairie that sit away from the river. While this area has always been in the formal floodplain of the Trinity since the last ice age, the new channel has carved through areas not associated with riverbank sedimentation. So you see yucca, live oak and other species that usually reside miles from the Trinity River bottoms. It’s more of a soil issue than anything else.

Below are some of the deer that live at Goat Island Preserve. The second set of deer in the video are on the actual Goat Island itself, in the river channel. Goat Island is about an acre in size. 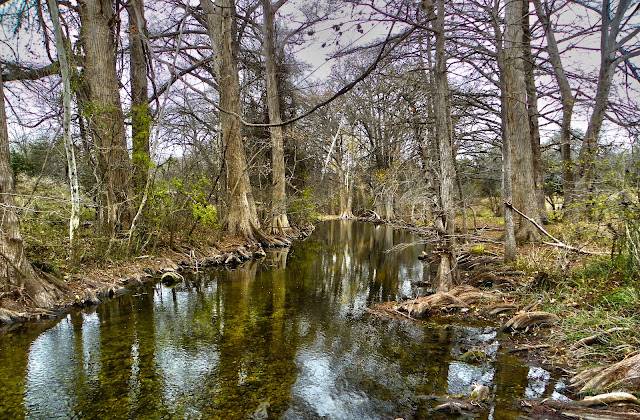 Parsons Slough was one of the finest fishing streams in Texas, probably, for many years. There were long, deep holes with gravel bottoms and crystal-clear water, and fish abounded there, until practically exterminated by dynamiters and netters. People went there to fish from all over Dallas, Collin, Rockwall, Kaufman, Ellis, and other counties, and for years, it was the hunter’s and fisherman’s paradise.–William Holford June 17, 1910 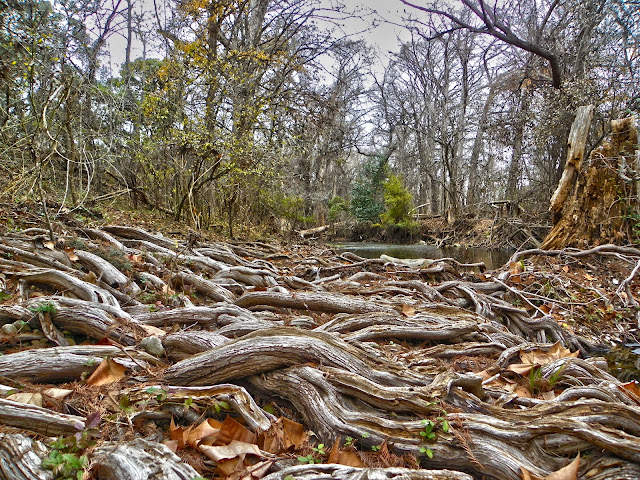 Thanks to a healthy dose of snooping around and a couple well worded formal letters I was able to check out a couple parts of Parson’s Slough that outsiders never get to see. Here the perched aquifers of the Trinity Basin are allowed to flow undisturbed over Ice Age gravels, crystal clear into small creeks and then into the slough itself. The clear water here is a combination of nature changing the river’s course and man making it permanent.

In 1911, the slough was permanently cutoff from the Trinity River near Goat Island Preserve. The same construction company that built Lock and Dam Number 2, built a concrete dam at the head of Parson’s Slough where it meets the Trinity. Twenty feet high and two hundred feet wide, the goal was to permanently send the river down the new channel rather than risk a flood putting the river meander back in the old. I have looked for that old dam. Now buried under dozens of feet of silt, I cannot find it. It sits near the outflow channel near the Southeast Wastewater Treatment Plant. Buried. Only during times of the very highest water flows would the dam become a spillway.

Combined with some levee projects in the 1920s, this left Parson’s Slough high and dry from the Trinity. It now serves as some of the very richest farmland in Dallas County. Much of which is owned by Trinity Industries for future gravel mining. Much of their property is easy to spot with the large “Blue Bird Farms” signs that are prominent over the entrances.

The water here percolates out of the ground like a coffee maker. Slowly. Over the old gravel. This slackwater zone probably allowed the Mary Phinney Saw Palmetto Alligator Slough to thrive. The old river route would have passed mere hundreds of yards from the palmetto groves. With the river’s change of course it allowed areas previously scoured by flooding to remain undamaged. 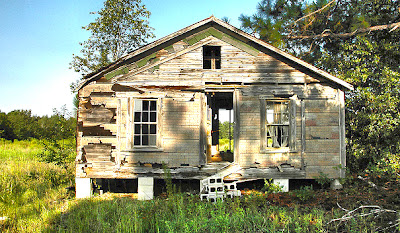 The clean water of the Trinity Aquifer and cheap land were a strong lure to impoverished African Americans in the early part of the last century. Sharecroppers and field hands, a group of sturdy people formed the community of Sand Branch south of Dallas and west of Seagoville. Here a man could dig a well for water with a hand shovel, finding fresh clean water not even twelve feet down. Without the restrictions of city ordinances, the residents were free to raise farm animals, crops and build housing as they saw fit. In the century since it’s founding, the residents have continued to live that way.

There are a number of odd socioeconomic headwinds in this part of the county. I’m not even sure how to describe the community of Sand Branch. If it were on the Rio Grande, you could call it a colonia. No running water. No sanitary sewer. No trash pickup. Some even lack electricity. I cannot believe in 2012 that people live that way in Dallas County. I cannot believe we let people live that way in Dallas County. I’m not passing judgment on the residents there. I have gotten to know a few over the past several months and they are making due with what they can. A rough lifestyle makes a rough person. I was not prepared for the abject, destitute poverty I encountered there. 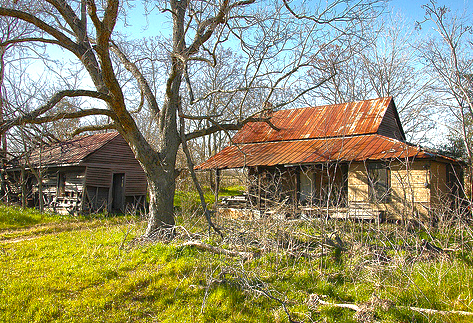 The sandy loam and easy to dig gravel that first attracted the residents of Sand Branch, proved to be the demise of the community. In the 1950s, a rapidly growing Dallas needed gravel and sand for concrete construction. The easy to harvest gravels of Sand Branch became the prime source. What was once a post oak savannah mix of prairies and bottom lands quickly turned into something that resembled a World War I battlefield. The reliable water supply became tainted with heavy metals and animal waste and rendered unfit for human consumption. The residents blamed the new wastewater treatment plant that shoehorned itself into to the north side of the area. Fair enough, although some of the blame can be shared with the residents who raise confined farm animals, pigs, in cramped conditions.

I was really interested in finding a way to the old Parson’s Slough Dam via Sand Branch. Bunche Street would get me within a couple hundred yards of it. I could never the dam though. Wandering around on some of the land, I was told to watch out for a herd of exotic Axis Deer that had taken up residence on the land to the south of Sand Branch. Sure enough I found them. Below is some video I shot of the herd:

Axis Deer(axis axis) also known as Chital or Cheetal are native to Sri Lanka, Nepal, Bhutan, India and Pakistan. They were introduced as an exotic game species here in Texas back in the 1960s. I was told this herd probably went feral off of a game ranch in western Kaufman County and wandered this way. Axis Deer are much larger than the native deer we have in Texas. They are donkey size. They really enjoy hot weather and breed year round. As a result, there are always smaller Chital around in the herd. I noticed several bucks in the group, with one larger one that commanded the center. There are over a dozen free ranging wild herds like this around the state.