In Dallas, you rarely find a place that wind, weather and woods are allowed to slowly dismantle. Usually bulldozers and backhoes do that work around here. Progress and paving usually gobble up old farmsteads around the county for new roads and development. There is a place though, tucked into the corner of the Great Trinity Forest where some of that old Dallas County farming life is preserved. It’s a place for lack of a better term, I call the Truck Farm. 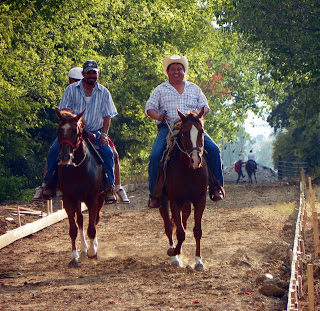 As far as I know, the trail through this old farm is the only soft surface trail on the south side of the river in the Great Trinity Forest. It was really just an old abandoned farm double track road that started to vanish with the passage of time. The rebirth of it came out of necessity for the horseback riders (inset left) who have used the Great Trinity Forest for decades.

The city is turning the old Simpson Stuart Road from a gravel access road into a hike and bike path that connects with the Audubon Center. The construction progress took a turn for the worse when the Water Utilities Department started on a project to reinforce a section of the riverbank very close to where the new Trinity Trail is located. They need the same acre of real estate for a little while before the final few hundred yards of trail concrete can be poured. Fair enough. In the mean time, in order to prevent vehicles from illegally dumping or driving into the park, the construction company built a berm across the trail(see below). Simpson Stuart Road is an attractive spot for illegal dumping given its close proximity to the McCommas Bluff Landfill. Errant trash haulers will often dump their loads along this block rather than visit the landfill. 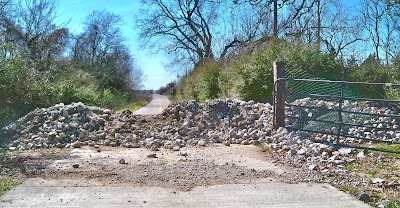 Lotta long faces when that happened. Late last fall, I stopped by the home of one of the guys I often see riding down there to ask why I have not seen his friends or horse tracks along the river. The berm he said. They were promised it would only be a few weeks. Well, those weeks turned into months. They are no closer to finishing now in March than they were in September, six months ago. Presented with a truckload of lemons, we made lemonade.

Knowing that there was an easy workaround just a couple hundred yards away, the old farm trail started seeing more use. 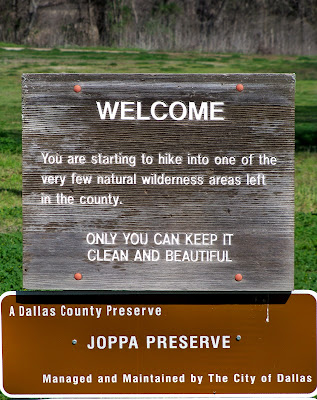 The trail itself has always existed. It was hidden from view when the Phase I of the Trinity Trail through Joppa was built in 2008. A bulldozer clearing debris pushed over a number of chinese privet bushes and dead tree branches into a pile in front of the trail opening, unknowingly blocking off access to the trail.

Getting that now dead brush pile out of the way, throwing away 45 old tires and some some illegally dumped roofing shingles, it all of the sudden became a trail again.

Disclaimer: The golden rule in city and county parks here is that you’re not allowed to cut brush or trim stuff without approval. I know that’s a big no-no. This was all dead stuff, deadfall and illegally dumped trash. None of what we did qualified under the umbrella of any restrictions regarding removal of vegetation.

I have taken a number of people back to this area over the last couple years. Frequent D Magazine contributor and Master Naturalist Bill Holston went with me last fall to this area and wrote a column about it Bill Holston Parched on the Trinity. His description of the old structures, the old dam and remote location are the same one discussed here.

Map: From the 5700 Simpson Stuart Road trailhead, travel north on the paved path about 150 yards till you see an opening in the brush. Trail is not long about 4/10 of a mile and rejoins the paved path to the east. It can also be reached from the Loop 12 Boat Ramp or River Oaks Park using the completed paved path through the Joppa Preserve Trail 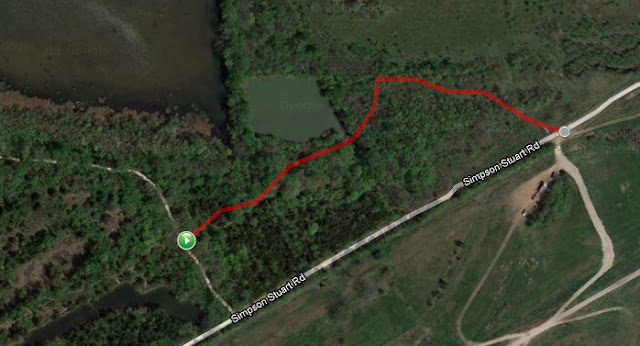 What in the world is a truck farm?

A truck farm is a small scale farm that produces a wide variety of fresh produce for sale locally. Many different crops and varieties are grown in contrast with larger industrialized farms that grow only one crop. A truck farm employs more hands on gardening techniques compared with large scale industrialized farming. Since production is small in scale, the market for the crops are usually local grocery stores, the farmer’s market or restaurants. One of the main customers of this particular farm was Safeway grocery stores. If you bought fresh produce from Safeway in the 1960s and 1970s in Dallas, some of your food came off this farm.

This area was investigated in an archeological survey pursuant to the Texas Antiquities Code and the National Historic Preservation Act as recently as 2001. Joppa Preserve contains three prehistoric sites and two historic sites. Previous surveys were done in the 1940s, 1970s, 1990s and in the 00’s. The prehistoric sites have yielded a number of artifacts including spear points, arrowheads, human remains and animal bones. I think the consensus is that the area between Little Lemmon Lake and Lemmon Lake was a prehistoric bison kill site of some kind. Some of the bison bone tested dates back to the same decade that work on Notre Dame began in Paris, 1163 AD. 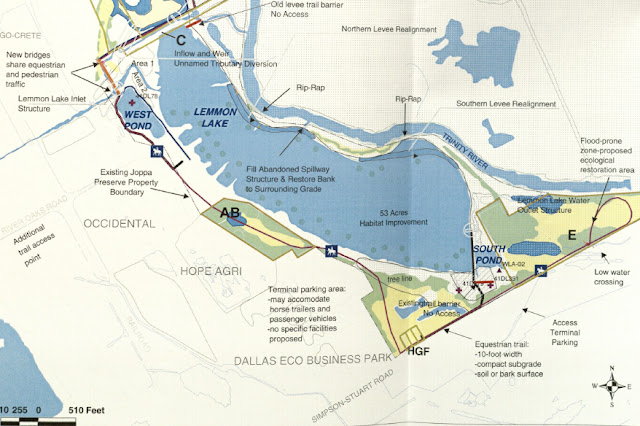 The truck farm area has a historic site built on top of a prehistoric site. Another case like Miller’s Ferry where humans seem to inhabit the same spot over and over again. A request by the latest archeological survey to dig at the truck farm site for prehistoric artifacts was shot down by the county. Whatever sits there, will remain there I guess.

The historic background of the site is a little confusing. The first deed on record showed that it was purchased in 1886 by former Confederate officers for a rod and gun club. In 1922 it was transferred as a warranty deed, part of the Harry Cox estate. It is believed that during the early 1900s a Japanese family farmed the land here. In 1902, Sadatsuchi Uchida a Japanese consular official settled thirty farming families in Texas from Japan. They were rice farmers and were attracted mainly to the coastal rice belt of Texas along the coast. The rice market cratered ten years later and many of the farmers moved into truck farming. It is thought that this farm in Joppa was one of these farms.

In 1921, Texas passed an alien land law forbidding ethnic Japanese from owning land. In 1940, only 458 residents were of Japanese ancestry in Texas. It was around that time that, according to the archeological survey, the Japanese were forced to sell their land. It was during that year, 1940, that a large internment camp was built in Seagoville, just down the road, for possible future use in a pending world war. That camp later housed 600. During this time from 1939-1944 it was owned by a JC Kelly who sold in 1944 to the Wulschleger family. The Wulschlegers ran the farm for many years after that. The Wulschlegers went on to supply fresh produce to many local customers including the Safeway chain.

I have been told by a few people that were former residents of the Floral Farms community that Japanese did live and farm this land. An intriguing mystery.

Above is an old sign I found a couple years ago, attached to a mangled mess of barbed wire fence that was balled up in a pile with trash when Phase I of the Trinity Trail was under construction. I threw it into the woods to save it from becoming trash and only recently dragged it back out. This sign was produced by McMath Axilrod at 620 Third Avenue in Dallas in 1945. It’s a steel sign with a porcelain finish. This sign was designed by John B McMath, chief engineer of McMath Axilrod. Mr McMath ten years earlier designed, constructed and installed the now famous Pegasus sign for Magnolia Oil Company for a National Petroleum Institute Convention in 1934. He also designed the porcelain and neon facade for the Lakewood and Inwood theaters. This old cattle ranching sign probably belongs in a museum. 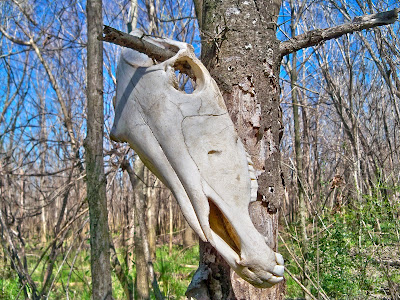 The trail itself meanders past a few old dilapidated shacks, a building foundation and some farm equipment. 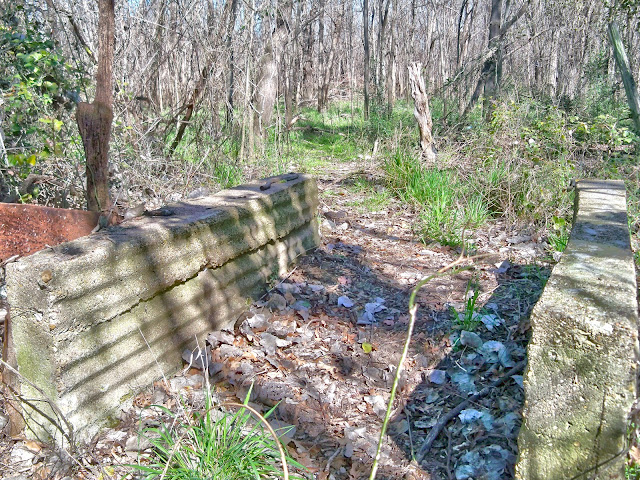 The trail passes through this concrete structure which I believe is part of an aqueduct system that gravity fed irrigation water to the crops. In the woods you’ll see sprinkler pipes elevated on poles in some spots, that watered the plants.

The pumphouse still has pump mounts but lacks any of the old equipment inside. Looks like someone more recently, within the last 20-30 years built a right handed bench rifle rest inside of it…and must have taken a turtle as quarry at some point. 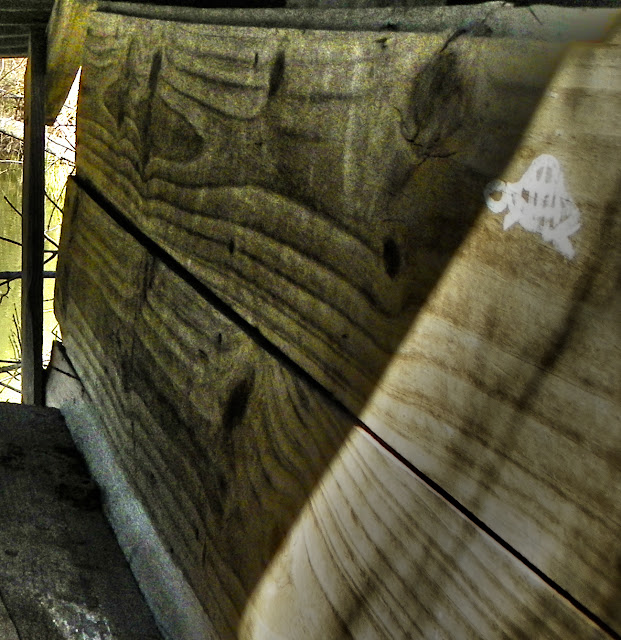 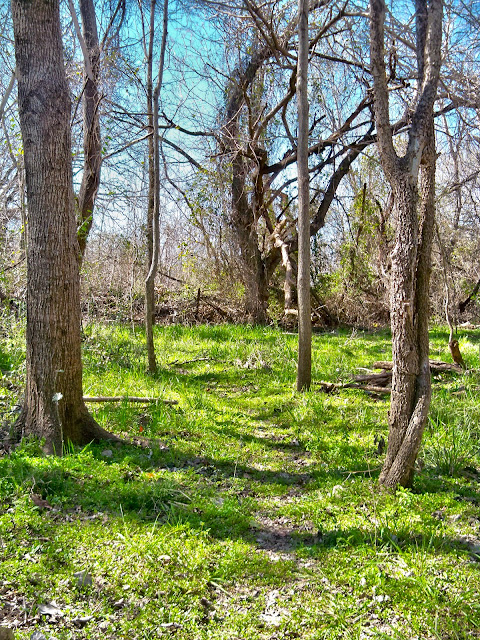 Potential of a trail across the Lemmon Lake Dam 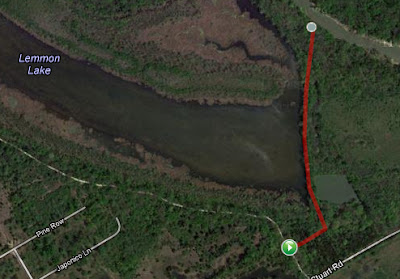 A secondary idea for a future trail would be one that branches off from the same spot, across the Lemmon Lake dam road to the Trinity River. As of this writing in early March, Lemmon Lake is full to capacity, 200 acres of lake and flooded timber. A trail using the route outlined above would not be underwater even during wet periods. The base of the road on the dam is pea gravel, a near all weather surface. The roadbed looks just like the video clip below, filmed in 1967 at Little Lemmon Lake in Joppa Preserve: 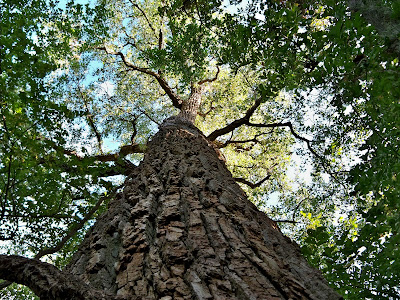 On the backside of the dam is what is listed in the Big Tree Registry to be the tallest tree in Dallas, a cottonwood, shown above. So tall that you cannot see the top of it from the base.

It’s a great little trail and serves as a welcome change from the now common miles of concrete trail underfoot. Hopefully, it can maybe someday be turned into more of a formal trail where people can learn about rural farming in Dallas during the last century. Given the close proximity to the trailhead and Eco Center, it would be a great site to bring school age children to educate them on farm life.