Daytime temperatures soar well over one hundred degrees in Dallas during early August. The chance to encounter some of the larger animals living in the Great Trinity Forest really drops off as a result. Down to a near zero chance of seeing one. Rather than a traditional 4pm Saturday visit to the river, I went down at 4am instead.

Planning a little ahead of time, I knew that the full moon would rise over Dallas after sunset and set the next morning at 9am. From 4-6am it would be near it’s height bathing the woods in a shadow pattern similar to that of the summer sun. Far enough away from the city lights, the moon casts bright vivid light, clear enough to read a newspaper or in my case walk without a flashlight.

Finding toads and frogs is easier at night than in the daylight. Using their calls coupled with a brief red-eye flash from a camera, one can see the glowing eyes of a frog bounce back.

The Great Trinity Forest has a variety of frogs and toad species. In addition to the Green Tree Frog, there are species of the Leopard Frog(both Plains and Southern) and the Texas Toad(both Texas and East Texas Toad).

My resident go to guy on herpotology, Michael McNair is still on the mend from being struck by a car in May and just recently released from the hospital after spending almost 40 days in Baylor’s ICU. He would know more about these amphibians off the top of his head that I would know scouring wikipedia for their ID.

Bioluminescent fungus goes by many names, Will o’ the Wisp, Foxfire and Fairy Fire to name a few. The rotted falling logs around the oldest portions of old growth forest along the Trinity host the fungus among the detrius of the forest floor. I have found it after sunset in a number of places on the Trinity but only in areas above the 100 year floodplain or not subject to prolonged submerged periods.

Scientists are unsure as to why some species of fungus are bioluminescent. One possibility is that the faint glow attracts insects, which proceed to disperse fungal spores. Thus, in the case of fungi bioluminescence may serve as a form of reproductive assistance.

Parade of the Pigs

I have been able to find the same feral hog sounder this spring with pretty good success. Knowing where they are and when they are active lets me follow them at a distance with ease. The trick has been the daytime heat. When the weather gets too hot, they are not active until after dark. That poses a problem seeing them in the high grass they enjoy.

The result is below, filming a 19 pig sounder parading across a mudflat well before dawn.

It was so dark that the pigs did not even spot me, standing out in the mudflat, in full view. It’s fun to watch them crossing the mud, all in a line, wary of the dark around them at that early hour. Pigs have excellent senses in the smell and hearing department but have really poor eyesight.

The mud serves as a historical record, a guestbook of who and what has been through the area. All prints lead to the water holes. Pig, coyote, fox, raccoon and bobcat. I placed an HD camcorder at one of these waterholes the evening before hoping to catch some unattended views of wildlife before sunset. Not much happened as the sun set. It was some hours afterward, maybe 10pm that some kind of violent explosion of stomping, snorting and ruckus occured. The sound was crystal clear, the video was black as black can be.

Dawn’s early light at around 6am with a 6:40am sunrise is an interesting time when the light is about as strong from the moon as it is from the sun. The cool blue of the moon mixing with the reds of the rising sun mix into some interesting colors on the horizon. 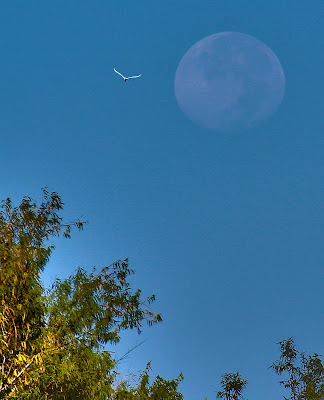 With the rise of the sun and setting of the moon it was time to head over towards Little Lemmon Lake to rendezvous with Dr Tim Dalbey for a look into some River Otters and Spoonbills that had been sighted there earlier in the week. Drawing a blank, he showed me around Roosevelt Park, Bruton Bottoms and Oak Creek on a driving tour, scouting out areas to explore in the future. I’m excited about what might lie up that way, vast out of the way sloughs, wetlands and swamps. We came across a dead beaver on Bruton Road, probably killed by a vehicle within the last few hours. Moving it off the road, it must have weighed well over 50 pounds and appeared pregnant. Some reckless driver killed it for sport from the looks of things.

Before making our way back to where I had parked, we swung by a potential pre-historic Indian site and a set of historic outbuildings. Walking down the trail only 100 yards we encountered this nice young healthy 6 point Whitetail Buck. 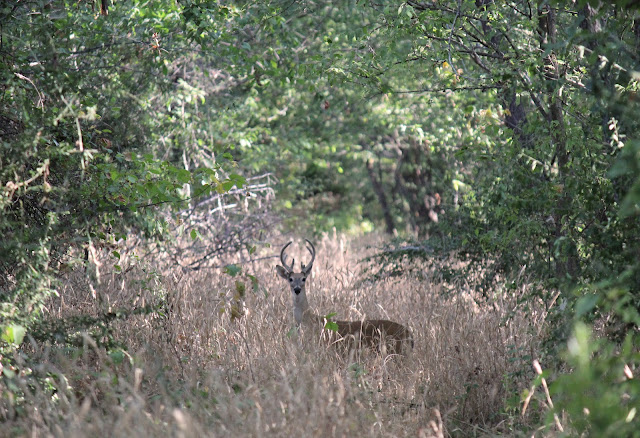 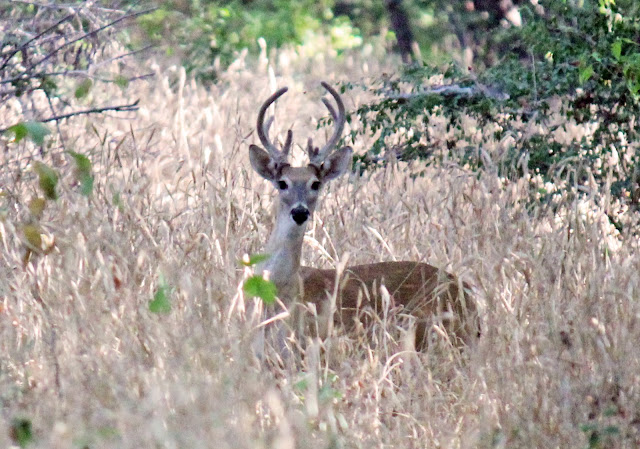 Twilight Over The Great Trinity Forest