A sighting of Roseate Spoonbills in North Texas is a rare and special occasion. Their occurrence as a casual summer visitor to the Great Trinity Forest has not been well documented so seeing one, a pair, a few or a baker’s dozen is special.

Spoonbills, which share the same pink plumage and long twiggy legs as flamingos, are actually members of the ibis family. Generally smaller than flamingos, roseate spoonbills grow to a height of 32 inches with a wingspan of 50 inches, have shorter necks, and longer, spoon-shaped bills. They are found along the south Florida coast from the Florida Keys north to St Joseph Bay, with some populations in northeastern Florida and along the coasts of Texas and Louisiana. The worldwide population is only 175,000 with 30,000 living in North America. Whittling down that number further, many of those 30,000 live in Florida, the Caribbean or along the Gulf Coast. It is estimated that there are 5,500 breeding pairs in the USA. I wonder seeing 18 individuals here in Dallas, what percentage of the Texas population away from the coast this represents. I imagine many fly up from south of the Rio Grande and are not breeding in the US during the spring. 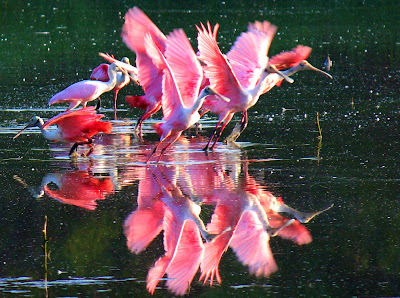 Roseate Spoonbill populations were reduced to only 15 pairs towards the end of the plume trade era through the early 1900s, but numbers expanded following legal protections and enforcement of conservation areas. Current threats to the species are not well understood, but degradation or loss of habitat due to coastal development, hydrologic alterations to wetlands, and reductions to important prey sources are of primary concern. Like other wading birds that depend on fragile estuaries and wetlands for foraging and breeding, Roseate Spoonbills are at risk of exposure to persistent contaminants such as heavy metals and pesticides.

Getting up close to these wild birds is a trick unto itself. To really get close, to really insert yourself into their environment requires getting among them before dawn. In late July, that is before 5:30am. The photo above was taken around 6am on July 28th in the pre-dawn, a half hour before the sunrise. Many of the birds seen here were still asleep, others were beginning their early morning preening ritual. Most of that white bird mass population are Wood Storks. I stopped counting after 300 Wood Storks and would put the number closer to 400 that morning.

Photographing these has been quite a challenge. I can only compare it to duck hunting and turkey hunting in degree of difficulty. Getting close to these Trinity River birds is harder than any hunting I have ever done. A real challenge. So quick to take flight if they sense a predator.

The reward for the early wake up, near insane stumble through the moonless woods and dressing up in clothing to resemble a breathing bush…is seeing the sight above. The Wood Storks sleep at Lemmon Lake, leaving at first light to roost elsewhere for the morning. Having hundreds fly around, a few at first, followed by dozens, followed by hundreds at a time is really something to see. Not knowing I’m bunkered in the thick grass, they fly directly overhead, close enough that I could reach out and touch them if I felt like it.

Getting along the shore early means that I’m there before the morning dew or fog develops. The Wood Storks leave before the misty fog rolls in across the lake. It’s short lived as the first rays of the Texas July sun nuke the fog in short order. Left behind after the daily Wood Stork exodus are egrets and herons of every species native to Texas. Name it, it’s there. From Reddish Egrets to Green Herons, it’s there.

Resembling something like a free range Amazonia exhibit at a zoo, the colors and sounds intensified as the sun rose. The smell of the peat-mud lake bottom, the snap of the porpoising alligator gar and the grunt of distant pigs in the grass add a 4th dimension to it all.

Below is some video footage of the Roseate Spoonbills at Lemmon Lake and a good close look at a White Ibis eating a snail.

The Roseate Spoonbill is the only spoonbill species that inhabits the western hemisphere. The species is a resident breeder in South America, generally east of the Andes, and coastal areas of Central America, the Caribbean, and the Gulf of Mexico. Mangrove islands and occasionally dredge-spoil islands are the preferred nesting habitat for the species. 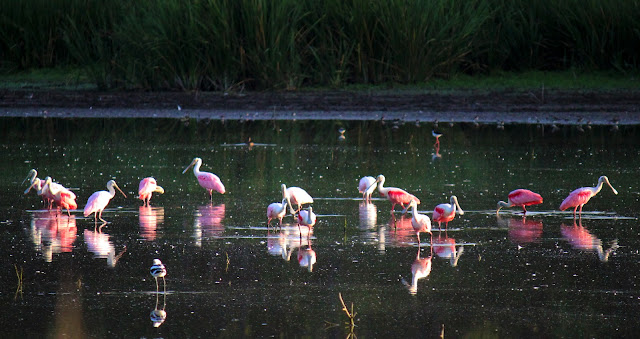 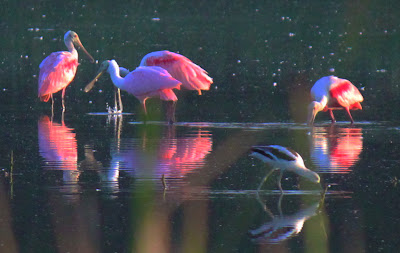 Spoonbills require dense concentrations of prey to feed effectively. They feed in water no higher than their knees by sweeping their bill from side to side. When the highly sensitive bill bumps into minnows, crustaceans or aquatic insects, a series of nerves along the tip trigger the bill to snap shut and engulf the prey. 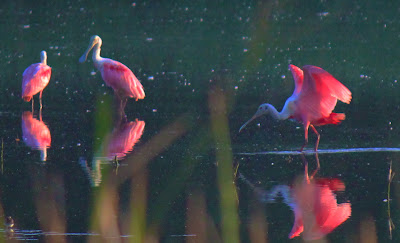 Bastille Day With The Swamp Coyotes