I imagine if we could crawl inside Governor Rick Perry’s head at night and see his deepest and darkest nightmares it would look something like the photos and video in this post! A pack of coyotes on a bike/jogging/nature trail. His Coyote Special Ruger .380 would find itself winchestered out of ammo in short order on the Trinity Forest Trail.
Urban and suburban coyotes are often feared here in Dallas due to a general misunderstanding about how they behave. The local TV media does not help coyotes much with sensationalized stories of coyotes terrorizing neighborhoods. If a dog or cat goes missing in the far suburban reaches of the 972 area code, a coyote seems to get the rap. And airtime on TV. Almost as much as whatever iphone is coming out next. Or Tony Romo’s rib.

Fact is, unless you run across a rare hybrid coydog(half coyote/half dog), your average pet dog will outweigh it by a handsome sum. Coyotes are built for lean, efficent travel. They often range 5-7 miles in a 24 hour period and need a lean build to maximize the calories they consume. Unlike their wolf cousins, coyotes are omnivores meaning that they will eat just about anything.

The coyote pack photographed in this post is comprised of two adult coyotes and their two offspring. For lack of a better term they are mom, dad and two siblings as best I can tell. Coyotes usually mate for life and will usually stick together throughout the year. Juveniles will usually break away from the family pack around November here in Texas and venture out to find a new home range. Mortality of a coyote litter is quite high. Coyotes have an average litter of 6-10 puppies with only two making it through the first year.

VIDEO
Below is some video of the coyote pack taken in the late afternoon/early evening October 15, 2011 near the Joppa Preserve trailhead in the Great Trinity Forest.

There seem to be two varieties of coyote – runners and non-runners. The majority of coyotes run if you even begin to look their way or change your path. I’m not sure if running from humans is a learned trait, but I think every coyote who has ever been shot at or had his mate shot is a runner from that point on. I’m sure running is conducive to longevity. Here in this part of the Great Trinity Forest, the coyotes are non-runners. They casually ramble along keeping you at a distance. If you approach them, they simply leave or get far enough away. They are curious and seem to enjoy watching people as much as you do them.

I know some of you reading this have mountain biked with me down here in the past, where around sunset the woods around Lemmon Lake turn into a coyote symphony in every direction. Usually we only get a glimpse of a coyote through the brush or a brief sighting as it turns tail. To get a good view of the coyote pack in the video above I loosely followed them from the dried bed of Lemmon Lake through the horse trails at Floral Farms. I had an idea that they would probably emerge from the woods where the Great Trinity Trail starts on Simpson Stuart Road near the Eco Park campus. Sure enough, they came across like clockwork. In the video you can see how they are casually moving south into the McCommas Bluff landfill property. They eventually crossed a flood control berm and down into a basin. They came back a few minutes later and just chilled out in the grassy field beyond the fence. 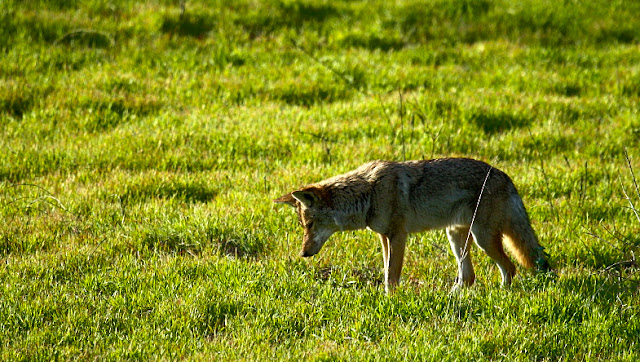 The coyote above was actually hunting grasshoppers (sorry to burst your bubble about the fierce predator lying in wait for Red Riding Hood). It was doing one of those 4 legged pounce acrobatic maneuvers.

This summer when Lemmon Lake dried up, I was able to see through footprints what kinds of animals fed on the decaying fish that perished during the drought. The coyote tracks were only around the carp, buffalo fish and catfish. They did not touch the numerous alligator gars. The feral pigs ate the gar.  So it seems while they may gnaw on whatever they come across, they do have a gag boundary on the distant horizon. One that they even turn their nose up at.

Seems to me that the only way animals like these can become a nuisance is if people feed them or are careless with their pets. Watching them in their natural habitat one can see they are just screwing around and take advantage of opportunities when the world serves them up on a silver platter.

One rare example of life imitating art on this stretch of road is that this is the same area frequented by a Greater Roadrunner.

Just like the coyotes hunting grasshoppers on the edge of the trail in the first clip, the Greater Roadrunner in the clip above is doing the same thing. There is a gentleman who spends quite a bit of time sitting on this closed piece of road in his Jaguar, reading his bible on the weekends. He said he goes down there to keep the roadrunner company. Next time I see him I’ll have to ask if he has seen any ACME delivery trucks dropping off any dynamite, anvils or rocket powered roller skates for the coyotes.

Construction continues on Phase II of the Trinity Trail from the Audubon Center to join the previously completed Phase I. New signage has been installed recently and landscaping is going in. I think that until the 72″ Water Main project is completed that the trail will not be finished on the south side of the river. It looks like the stretch from the Audubon Center to the new bridge will be open soon with the rest open months later. The heavy construction to repair the riverbank looks a long time from being finished.

Whitetail Deer of the Trinity River Forest in Dallas

Autumn Frost and Fog — A Walk To Joppa And Beyond