Autumn Frost and Fog — A Walk To Joppa And Beyond

The last weekend in October proved to be a great time to visit the Great Trinity Forest in South Dallas. With the slow change of seasons from summer to fall complete, coupled with some recent rain and a strong cold front, the river bottoms entire complexion changed. Gone are the over summering birds of the tropics that fly from the Amazon to spend their summers here. The calls of the endangered Wood Stork, the Roseate Spoonbill and the Ibis are replaced by birds from the Arctic Circle. The Cormorant, Coot and Northern Shoveler now call it home.

This particular visit marked a number of firsts. The first frost of the season for the Great Trinity Forest. The first time I had visited the area before dawn. The first time I had gone down there sans mountain bike. I have mountain biked down there over 100 times but this marked my first true hike there. Meeting me for the hike was Bill Holston. Bill is a fellow SMU alum, noted Dallas attorney and frequent contributor to The Dallas Observer, D Magazine and KERA. He is also a Texas Master Naturalist and a walking-talking field guide on native flora and fauna here in Texas. 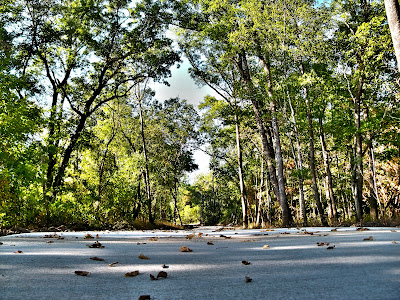 Ground fog carpeted fields nearby as we entered the forest and crossed the river. On the bridge we spotted a hawk and a Crested Caracara roosting in a nearby dead tree on the south bank of the river. The Crested Caracara, often called the Mexican Eagle, is the national bird of Mexico and is depicted on their national flag. I saw one or two here last winter. Here the largest trees are native pecans. Old as time itself.

Leaving the fenced confines of the Trinity River Audubon Center you enter a part of Texas few people ever visit. Nestled between the Trinity and a swale lake, the area rarely sees humans. As evidence, the recent rain, the damp and sometimes muddy trail yielded scores of animal tracks. Coyote, bobcat, raccoon, deer and feral pigs.

The fog was really spectacular. Drifting in and out of the trees, Bill would stop and remark on different species of oak and ash trees. The areas closest to the river were never logged or farmed and can be considered old growth. Few pockets actually exist in Dallas and this is one of them. Many of the same trees seen in 2011 can be seen in 1936 aerial photos.

I think Lemmon Lake is one of the most unique settings in Dallas. Every time I go there I see something new. On this morning a fog had developed on the now dried lake bed, what some could even call a playa. We got there as the sun was rising over the trees, quickly burning off the fog bank. In the photo above, the fog bank is about 1/3 of a mile away. The large trees ringing the shoreline kept the fog intact in the shadows till the sun rose high enough to burn it off.

When Lemmon Lake went dry this summer it left many animals high and dry. The alligators and turtles left in exodus to the river beyond. The fish and shell animals stayed behind. Plenty of freshwater mussel shells on the surface of the lake bed. I discussed the drought and the effects on Lemmon Lake in an earlier post.

Lemmon Lake might be one of the oldest lakes in Dallas. Older than White Rock Lake, Bachman Lake, Exall Lake and the now long gone reservoirs that once served as the municipal water supply for Dallas on Turtle Creek. A victim of obscurity and an unreliable water source it can go dry in times of drought. I have seen plans where the Corps of Engineers might try and re-water Lemmon Lake using water diverted from the Wetland Cell project upstream. Just north of Loop 12 is the Trinity River Wetland Project. The chain of lakes get a portion of their water from the wastewater treatment plant just upstream. The water has no smell. You would never know it was treated wastewater. Below is a clip of what the wetland cells looked like at dawn on October 30th. The water slowly flows from one cell to another using a series of gates and shallow aqueducts.

The pond above sits directly south of Lemmon Lake. About an acre or two in size it maintained a near constant size all summer. We guessed it must be fed by a spring of some kind since the larger lake to the north went dry months ago. The southwest side of the small pond has a small collection of dilapidated cabins and outbuildings in severe disrepair. The detritus and old trash around the buildings suggest they have not been used in many decades. This structure could have been part of the Floral Farms or Joppa Freedman’s Community at one time.

The river always makes for good conversation especially when you come across others on the trail. I always ask others what they have seen and where have they been. This particular morning they had seen five deer. Then warned us about the pigs. One of the men said he once saw 50-70 feral pigs at one time in this area.

Funny, I actually know the dogs better than the guys on horseback. Other than the white dog wearing the chopped down Mexican rode belt for a collar. The rest of the dogs are all related. The rusty red colored dog is the mother, the rest are her still growing puppies. I think they must be 4-5 months old now.

How to get there

Joppa Preserve and the Great Trinity Trail can be accessed from 3 main trailheads with another currently under construction at the Trinity River Audubon Center.

Phase I completed in 2010 can be accessed via trailheads at the Loop 12 Boat Ramp, River Oaks Park and Simpson Stuart Road. I have previously discussed the details of Phase I in an older post:Great Trinity Trail at Joppa Preserve

Phase II which is still under construction on the south side of the Trinity can be accessed from the Trinity River Audubon Center property. I have discussed it previously in older posts: Great Trinity Forest Trail and Bridge . Construction is still ongoing around mile 2 noted on the map above. Open pit excavations and heavy machinery for a bank erosion control project. As a result the area should be avoided until construction is finished. When complete the trail there will rival that of River Legacy in Arlington. Note: The Trinity River Audubon Center closes early 4pm on weekends. They lock the main gates shortly thereafter. If you park at the Audubon Center, make sure you are back by 4ish.

For those more adventurous consider leaving your car behind and make the trip from Downtown Dallas, the Katy Trail or even White Rock Lake. You can even start at Bachman Lake and make a 50 mile roundtrip out of it to I-20 and back. GPS mapping data for that trip is here.

Many people have yet to realize so many of the trails and projects interconnect, if purely by accident. With the construction of the new bridge near the Audubon Center dozens of miles of unused trails are now open.