The winter and spring rains of early 2015 has brought an ocean of green growth to the Great Trinity Forest. The magnitude of growth the forest has not seen in several years due to drought. The flora and fauna of the woods have responded, signaling a new year of promise. Each spring sunrise seems to illuminate another inch of growth overnight. 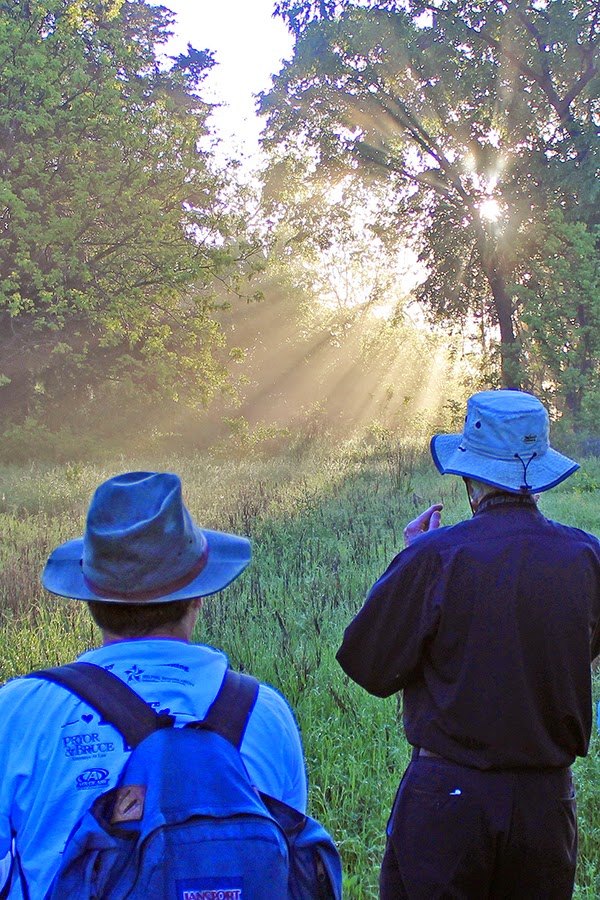 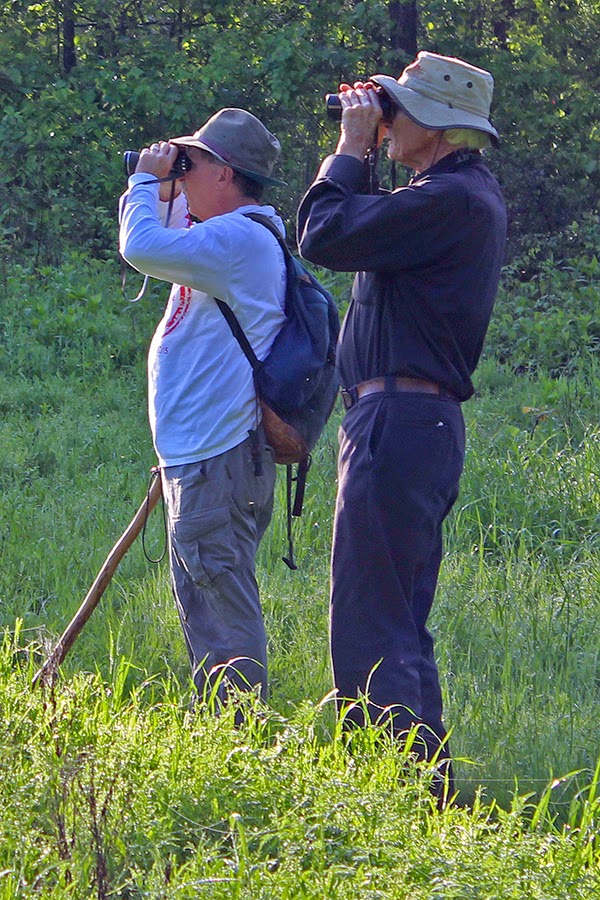 It is on of those fine spring mornings one can pursue the wild birds of the Trinity. In this case the brightly colored White Eyed Vireo population at a place called Big Spring in the Great Trinity Forest. 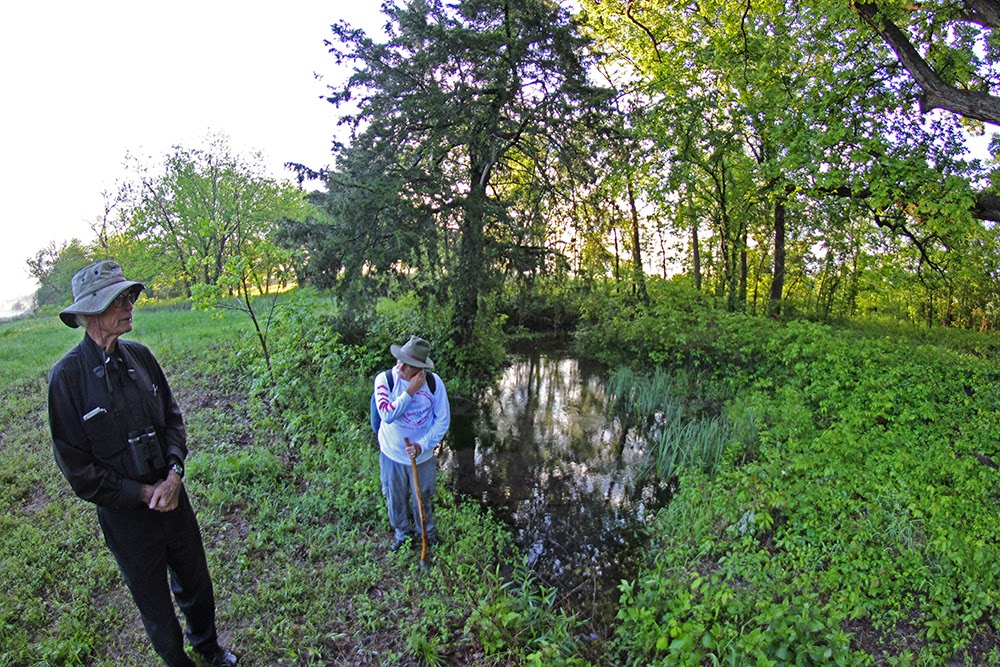 The story of Dallas County’s vireo population runs through the recorded sightings and observations of a South Dallas Catholic priest. His name is Father Timothy Gollob of Holy Cross Catholic Church. 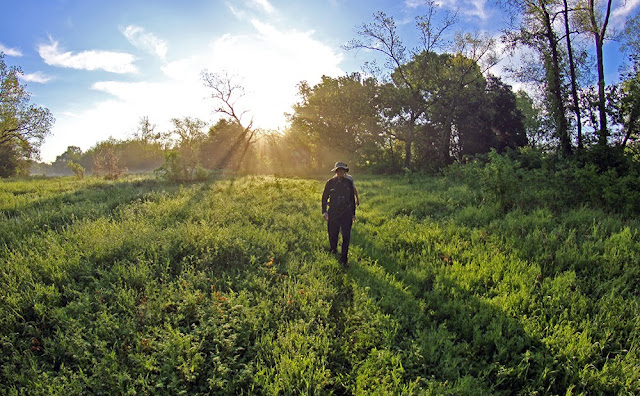 Father Timothy Gollob has been telling the story of the Trinity River for over a half century through his extensive bird observations. If there were a search for the man alive who knows the most about vireos in Dallas, it would be Father Tim.

His parsonage sits just west of the river bottoms only a minute or two drive from Joppa. It is there in the cooling atmosphere of early evenings where one can often find Father Tim with his field glasses walking the woods.

The Wood Storks, Roseate Spoonbills and Egrets all have been documented by him. On casual walks with Father Tim, he has mental notes about where the resident chickadees like to spend their mornings and evenings. Where the buntings feud. The favored nest sights and perches of the tanagers.

The body of his work in birding observations is overshadowed by his lifetime of service as a Catholic priest where he is known as one of the greatest humanitarians ever to call Dallas home. Ask around. He work is inspirational to many in a challenged part of Dallas where life does not often come easy.

Father Tim learned much of his birding craft from ornithologist and late University of Dallas Professor Warren M. Pulich. Pulich is considered the first resident professional ornithologist in North Texas. In the 1960s he authored the Birds of Tarrant County and later The Birds of North Central Texas. His groundbreaking work specialized in species like the rare Golden Cheeked Warbler. As Professor of Ornithology at the University of Dallas he led the way with many pioneering bird collection projects, many of which were obtained from bird strikes on high towers at Cedar Hill. Often accompanying Pulich was Father Tim.

Warren Pulich and Father Tim Gollob did extensive surveys and observations of vireo populations in the 1950s-1970s. Many of those observations were for the Black Capped Vireos of Dallas County in the southwestern portions of Dallas in the cedar ridges and woods there. The habitat was largely extirpated and with it the loss of habitat for that species of vireo. That species of vireo now resides on the endangered species list and is very rarely seen in North Central Texas. If there ever were a Dallasite you would want along to look at vireos it would be Father Tim…..

Hiking along this fine morning are one of Father Tim’s close friends and lifelong parishioner Jeff Lane. Jeff’s family has a multi-generational relationship with Father Tim’s church. Jeff Lane has performed a number of volunteer roles in the Great Trinity Forest and Trinity Corridor. Working in his free time with the county, he has kept many of the levee areas mowed at Goat Island Preserve and in the past mowed in areas around Joppa Preserve to keep trail access open.

Also joining along are Bill Holston and Scott Hudson. When Scott is not hiking on the weekend he can be found running one of the local municipalities environmental services departments. Below Father Tim and Scott Hudson listen for the identifying call of an Indigo Bunting. 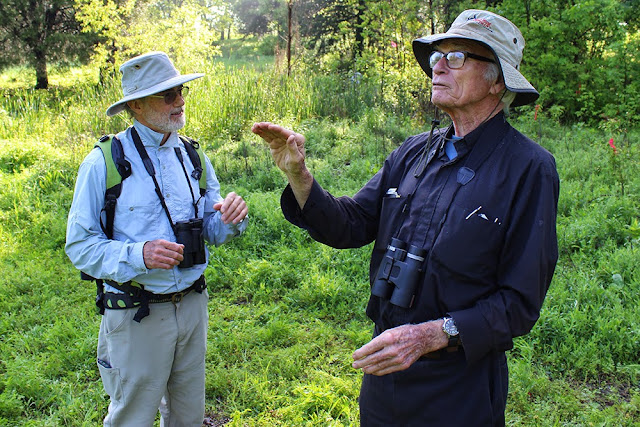 Bill Holston earlier this spring was recognized by Southern Methodist University with their 2015 Distinguished Alumni Award for Public Service
https://www.smu.edu/News/2015/law-daa-19march2015

About fifteen species frequent the United States. These are all members of the genus Vireo, and some of them have a wide range, only equaled in extent by some of the warblers. The name vireo signifies a green finch and is from the Latin word meaning “to be green.” The body color of nearly all the species is more or less olive green. A fitting hue of a bird to look for on a lush green morning. 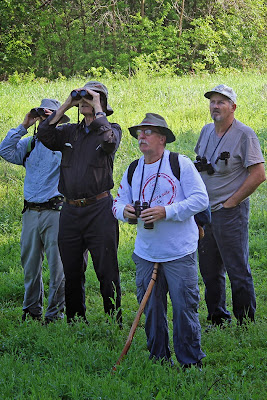 The vireos form a varied and interesting family — the Vireonidae, which includes about fifty species.
All are strictly American and the larger number inhabit only the forest or shrubby regions of Central and South America.

Insects are the principle food taken by this species of vireo, and especially Lepidopteran (butterfly and moth) larvae.

The White-eyed Vireo is a foliage gleaner, and it forages deliberately with short hops or flights. Most of the food is taken from leaves, and after a food capture, the bird will usually perch and swallow. An interesting behavior is the repeated flogging of large caterpillars on a branch before eating.

In migration and during the early days in the breeding season, males sing to attract mates, usually while perched high in a tree. It is at this time they are easiest to observe. Males vigorously defend their territories, while females are tolerant of others sharing the same area. Males often use the same territory from year to year, and older males arrive on the breeding grounds before young males. Females wander from territory to territory and eventually choose a mate and then a nest site. The pendulous, cup-like nest is attached to a Y-shaped horizontal branch a few feet off the ground in dense vegetation. The Big Spring vireo calls loudly, pronouncing rather proudly that he has the best territory in town.

Up to twenty five songs are predominate in the White-eyed Vireo population in the United States. Each individual has a repertoire of about a dozen songs, only males sing on the breeding grounds. Both sexes sing on the wintering ground to defend territories. Singing is believed to be learned behavior, with young birds adapting the song set of their father. White-eyed Vireos repeat an individual song type multiple times before switching to another song, and the order of songs appears to be random from one singing bout to the next. 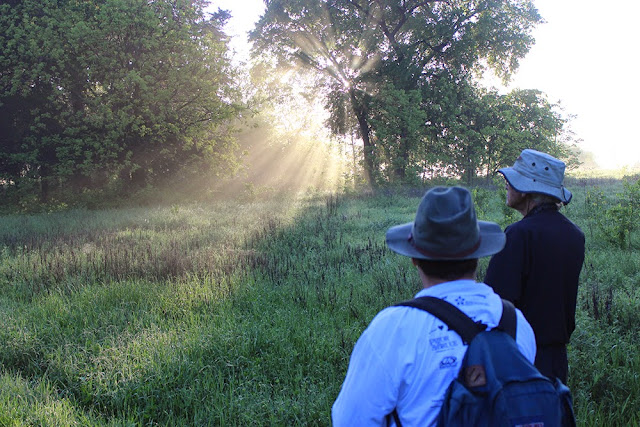 Our hike started on the high terraces of Pemberton Hill on an early morning after a heavy night of rain and thunderstorms. The rain, dew and fog made for a rather wet experience in the high grasses. 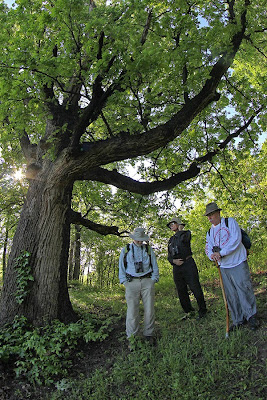 The topography of the land here steadily drops 50 feet in elevation over the course of a quarter mile which winds up at the site of Big Spring, a natural and free flowing spring at the boundary of Trinity Terrace sand deposits and the floodplain proper. It is an idyllic place.

A spot where it takes very little imagination to see the fondness generations of Native Americans, explorers and pioneers had for the place. It continues even today in contemporary times as people look for a connection to things natural and unspoiled.

As we dip farther down into an older forest the sounds of the song birds begin to erupt. The distant calls of Indigo Bunting, Painted Bunting and the more familiar Mockingbirds. It is here in this treelined transition zone between upland and bottomland where so much biodiversity can be seen. 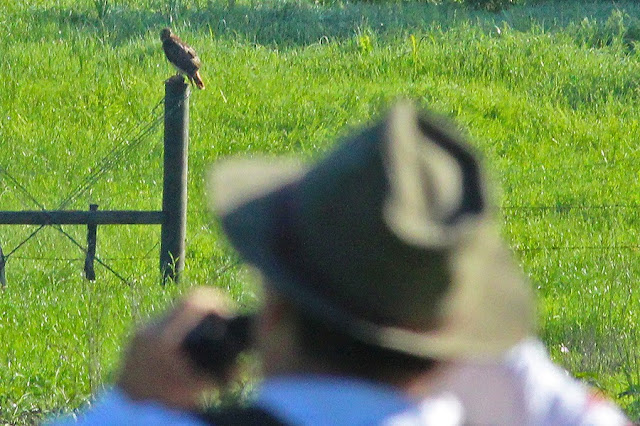 In the distance a Red Tailed Hawk stands perched on a fencepost casually eating a squirrel. Hawks usually fly away with prey when encountering humans, this hawk spent over an hour lazily nibbling on the squirrel. 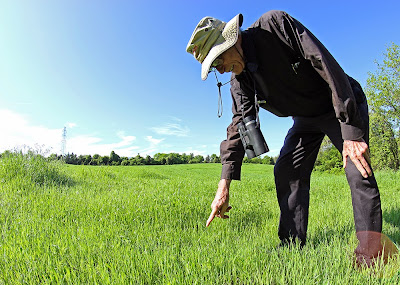 The trees, grasses and the wildflowers have formed a reciprocal community here fostering an environment of tremendous bounty. With the addition of heavy rains and flooding, the Great Trinity Forest is primed for an excellent late spring and summer of increased wild bounty.

As we walk from the flooded bottoms near the confluence of White Rock Creek and the Trinity back up the hill Father Tim is quick to point out the ladybugs afoot.

The rains are renewing a land parched for years. Talk of great things to come and a hopeful summer filled with the wild observations and sightings that make Father Tim Gollob and the little vireos he knows so well a treasure of the Great Trinity Forest.