It’s the Flood of 1957. Carbon copy of a large scale drought buster that quenched thirsty North Texas and ended years of sustained drought. To the month, to the week of the month, to the day of the month and even the river height are near duplicates to the inch. It is often hard to convey relevance to many when it comes to this place. Maybe there are not many around anymore who recall what the Flood of 1957 brought, the lessons learned and why you don’t mess with the river.

In order to gain such appreciation to take a place for granted one needs to talk about what is present in the landscape, what is absent or what has been absented. No one told a man named Wallace Jenkins that. No one sat him down in the 50’s drought when he decided to plant 500 acres in the bottoms near the mouth of White Rock Creek and the Trinity.

His ranch headquarters stood where the recent Texas Horse Park was constructed in 2013. Jenkins was so furious that his crops were ruined by changes in flooding that he ran for and won a seat on the county commissioner’s court. The whole of his effort was directed at flood protection and mitigation from changes in riparian flooding in the rapidly urbanizing watershed upstream. 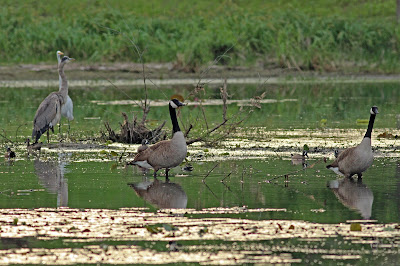 It was the flood that led to the bankruptcy of Riverlake Country Club in what we contemporary Dallasites now call the Great Trinity Forest. Backed by big sports names like Mickey Mantle, funded by well connected Dallasites with braggart attitudes of controlling a piece of river bottom spilled across the pages of the Dallas Morning News of yesteryear in paid advertisements. The river smashed that idea to pieces. Over and over again.

That old golf course was bought for flood control in the last decade. Gone are the sand bunkers, manicured greens and the clubhouse. The ghostly cart paths remain intact. Portions of a levee built, rebuilt, fortified and left behind still exist.

Where the water goes once it leaves the confines of the Trinity Levees in Downtown is a complete mystery to so many. It is cringe worthy reading others thoughts on what happens to the water, impact on new construction and the often untold stories of South Dallas residents who live without flood protection. Large technological dreams of concrete are stalking the river which will ever change the hydrology of not just the Downtown area. The water flow will accelerate and scour the Great Trinity Forest in ways no one has yet to imagine.

A Mexican Eagle on May 24, 2015 is the only living thing seen across the horizon. Across an angry chain of river raged swale that was once golf course across from Joppa. Standing on a pile of clearcut tree trunks admiring the view of a bend in the river. A bend that the freed slaves who founded the community here referenced a similar bend in the Old Testament. A bend that Moses and his followers found when freed from bondage. 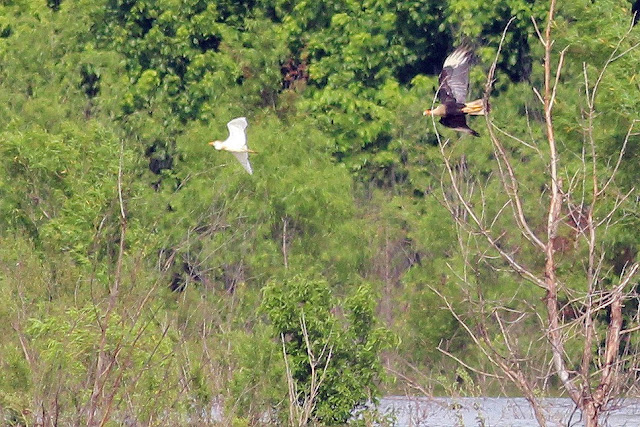 Many Dallasites have never seen an eagle outside of a zoo. Fewer have seen one in Dallas. Fewer still have seen one chasing down killing another bird in aerial combat as the photo sequence above shows at Cell G in the Lower Chain of Wetlands.

The flood waters are not high enough to build an ark but in some places the animals are lining up in twos. At Joppa Preserve pairs of Black Bellied Whistling Ducks line up and feed among the flooded shallows of the ever rising Trinity whose channel is some 3/4’s of a mile away. Black Bellied Whistling Ducks are an uncommon site in the Dallas area. Many experienced birders don’t have them checked off their bucket lists for the county. Here, in South Dallas they can be seen with some regularity in the summer and early fall. 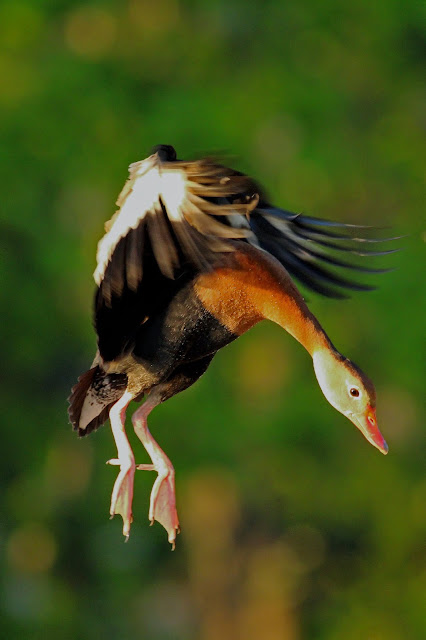 Birds like the Black Bellied Whistling Duck which hails traditionally from the corn belt of Mexico has been drawn in Aztec and Mayan art on their temples for centuries. The Mexican Eagle also known as the Crested Caracara has been depicted as an ancient symbol in sacrifice and even adorns the current flag of Mexico.

These birds exist here as summer residents yet rarely documented. The reason is that traversing this land, this river, this river bottom turns away all but a few. The long winded stories about personal safety have a ring of truth to it. Throw in high fast moving water and the number of people visiting such a place whittles down to about zero. Visit this place and you will have it to yourself. 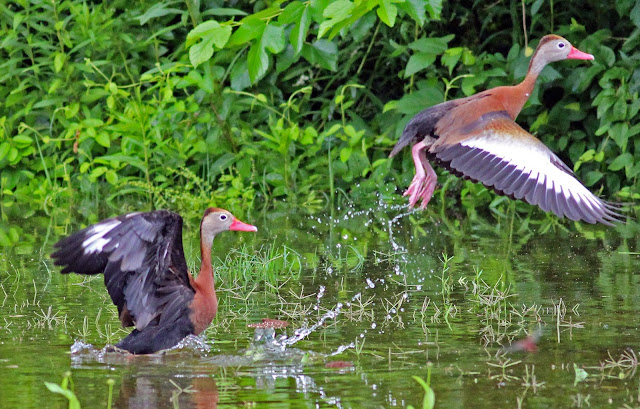 Getting into these spots is less than straightforward during dry spells. The adventure of making your way into the unknown and untouched masterpiece of nature here is one that people crave yet few know it exists in their own backyard. 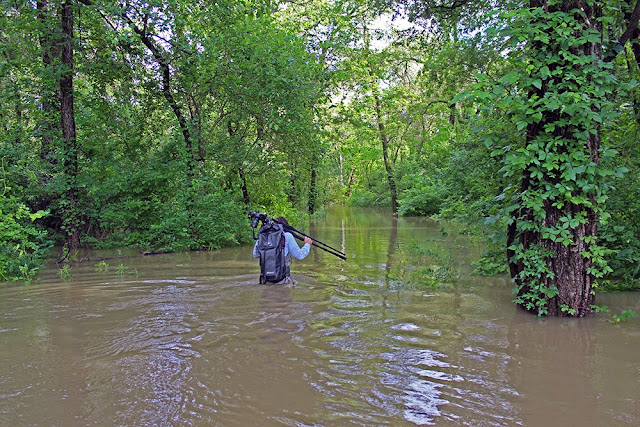 The few who do know these places well are folks like Sean Fitzgerald a well known and popular professional photographer based out of Deep Ellum in Dallas, Texas. His website http://www.seanfitzgerald.com/ has photos from all over the world. Quite a few are from garden spots across Texas like Big Bend, Blackland Prairies and the Great Trinity Forest.

Making headway across water neck deep with delicate camera gear is a tough chore to accomplish in dry weather and very tough in high water. One false step and the camera gear can be ruined in an instant. The risk is worth the reward when the weather, light and wind cooperate to allow for sights so stunning that a camera cannot capture the intense color and beauty.

This is the Great Trinity Forest. The wild open lands inside an urban metropolis of millions. A complete fluke of a gift left behind untouched by people for decades. To be here at this spot, at this time under sunset perfected light is something I wish all decision makers could see with their own eyes.

Seeing such a place would change their perspective and prejudices of such a place. It will make anyone second guess their ideas of blight and trash in South Dallas. It is a beautiful place of water, wildflowers and wildlife that cannot be equaled upstream or downstream.

As the light begins to soften and the sun begins to set the real true colors of a Texas spring take shape. It is the magic hour for photography when the sky comes to life. 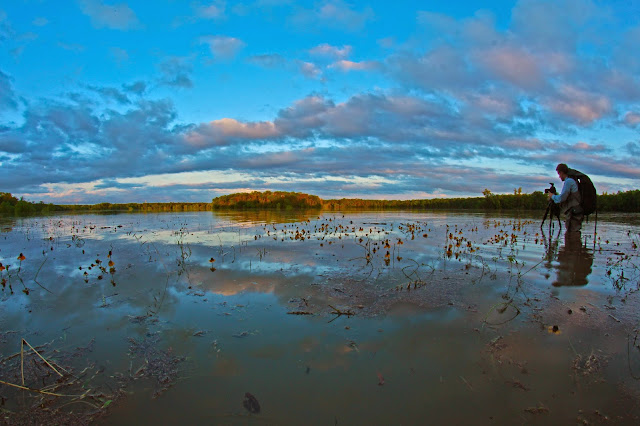 These sights are only temporary. As the river rises and crests it is soon surely to fall. A brief period of inundation that spreads nutrient rich silt, aquatic life and plant seeds into new areas. The harvest of such a flood comes months from now as the water recedes and brings forth a new beginning to the ecological cycle of the Great Trinity Forest. 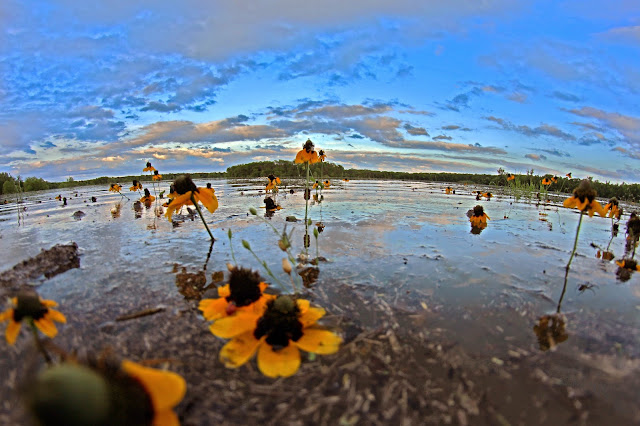 Canoeing The Elm Fork of the Trinity River