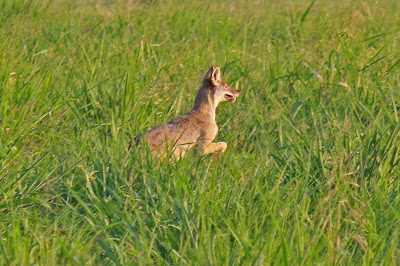 It’s a scene out of rural Texas. A coyote jump-hunting cottontail rabbits on a sun-soaked evening as the sun begins to set. A predator versus prey game that plays out countless times in a day across the state.

The work done here by the coyotes is one of pride and pleasure. You can see the smile on their faces as they jump from one clump of grass to another rousting a hiding rabbit from one hiding spot to the next.

The pancake flat grassland here is not one of a far flung rural farm, it sits in the heart of Dallas within view of the Old Red Dallas County Courthouse and almost underneath the Margaret Hunt Hill and Continental Street Bridges.

Coyotes are highly adaptable and can survive in urban areas as long as food and shelter requirements are met.  In urban areas coyotes will feed on almost anything including garbage, pet food, small cats and dogs, and other wild animals such as rodents, skunks, raccoons and birds.  Coyotes typically hunt alone, however they may hunt in groups when food is abundant.

These particular coyotes have been here a number of years. I can recall the night shift watchmen during the Margaret Hunt Hill Bridge construction comment on the coyotes who casually made their rounds in the evenings. The coyotes have learned that the day shift of construction workers would toss their lunch scraps around the job sites under the bridges. The coyotes here patrol the sites in the early evenings, going from one work site to the next. 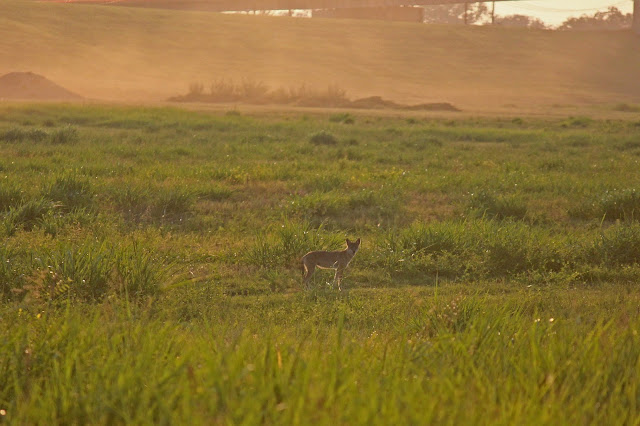 Coyotes sightings this close to Downtown Dallas are rare only because so few visit the area.  In areas where they are hunted and trapped, coyotes are extremely wary of humans.  However, in urban areas where they are less likely to be harmed and more likely to dis-associate people with danger, they simply give humans a wide berth.

You are more likely to get attacked by a swarm of killer bees than bitten by a coyote.

2013’s Renewed Promise of a Trinity River Trail in Downtown

The look of open fields and a sea of grass might look different in the near future. Just this past week there was news from City Hall of a renewed promise for building trails inside the levees near Downtown Dallas. More can be read about the details in an article by Robert Wilonsky in the Dallas Morning News here: http://cityhallblog.dallasnews.com/2013/08/dallas-has-a-new-alignment-for-long-planned-trail-along-the-trinity-river-and-now-it-actually-runs-along-the-river.html/ 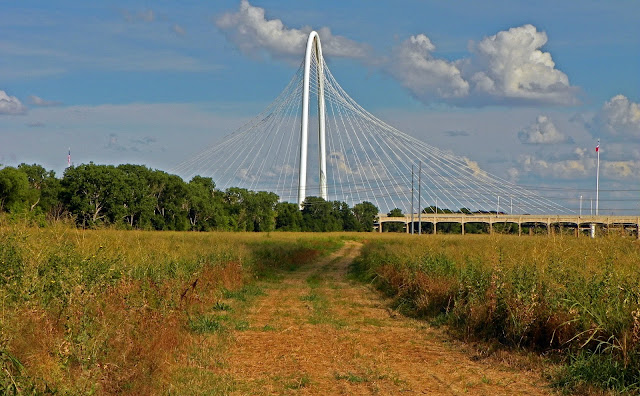 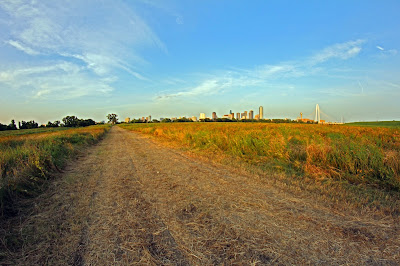 Currently a dirt road already exists, cut late this spring that serves some unknown utilitarian purpose. Most likely in bridge construction or pipeline maintenance of some sort.

Quite a few people ride the new dirt roads down here. They are 90 degree, perpendicular off-shoots to the older levee roads and give a unique perspective to the river.

One of the gripes of the levee road access is that it never gets you to the river. Separated hundreds of yards from the trees and river bank, the river itself always seems like a distant mirage.

The 2011 Trail Idea
This is not the first try at a trail between the levees. Many may recall a plan headed up this time of year in 2011 by city councilpeople Angela Hunt and Scott Griggs. Their simple idea was to build soft surface trails near Downtown Dallas inside the floodway.

Known as the Trinity Trail Project, it actually became a reality for a short time. The details of that are here http://teambetterblock.com/blog/2011/08/26/trinity-trail-project/. I actually rode the miles of trails cut inside the levees. That was a well thought out and unfortunately temporary path. I think those involved in that effort can see the fingerprints of their hard work in the new project. The local mountain bike group DORBA purchased a tow behind mower for that project, one that was never used. It is headed to two new projects on the Trinity River at Goat Island Preserve and Riverbend Preserve in Southern Dallas County. Those new trails, will use that mower than never saw use between the levees. 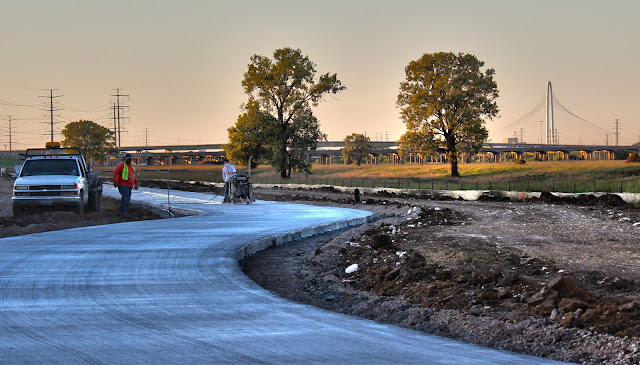 In late October of 2012 a concrete bike trail, technically a road, was built from near the Corinth DART Station at the Santa Fe Trestle Trail due west along the base of the levee stopping just east of the I-35 Bridge. Taking only a week to build, this ribbon of concrete replaced a dirt access road.

I guess the trick is how all these new trails can be built with years of upcoming bridge work and construction. Currently, in the summer of 2013, the bridge work for the I-30 replacement bridge, the Margaret McDermott Bridge.

When the first Santiago Calatrava Bridge was under construction, access anywhere nearby was quite difficult due to the large construction footprint. I imagine that the new Calatrava bridge might even be larger in scope due to the width of the I-30 replacement.

Given the number of construction vehicles, concrete trucks and semis trying to make the grade in and out of the levees, it was a real trick to navigate it on a bike.

With so many bridges currently under construction, closed for repairs or having trolley tracks installed, riding from the north side of the Trinity to the south on a bike is a real pickle at the moment.

The Houston Street Viaduct, Continental Street Viaduct and Sylvan Avenue Bridges have long been the most well traveled routes for cyclists and runners between Downtown Dallas and Oak Cliff. Presently all are closed. That requires using a makeshift lane on the Jefferson Street Viaduct to cross the river. Access from that bridge is somewhat limited to the river levee trails itself, requiring a double back on a closed road at the moment. Hopefully that improves soon with the winter 2014 opening of the Sylvan Avenue Bridge.

Fireworks Over Dallas — Megafest Summer Finale Over The Trinity River