Fireworks Over Dallas — Megafest Summer Finale Over The Trinity River

I suspect many a Dallas resident was bumped out of bed in the wee hours of September 1st 2013 by the rumbling concussion of six inch firework shells. The loud sounds of course were slightly unadvertised and I imagine caught many unaware. The fireworks were associated with the conclusion of Megafest, a conference attended by some 50,000 people from 40 nations organized in large part by TD Jakes pastor of the Potter’s House, Joel Osteen and Oprah Winfrey.

Fireworks fired inside the levees with a backdrop of Downtown Dallas are somewhat rare. I imagine it might be another couple years before another one, maybe a dedication event for the yet to be constructed Margaret McDermott Bridge replacement for I-30

Video of Fireworks Show in conjunction with the Megafest Conference in Dallas Texas, midnight hour September 1, 2013, in the Trinity River Bottoms

The venue for the fireworks was Trammell Crow Park on the Trinity River. Located on the north bank of the Trinity River between the Sylvan Avenue and Continental Ave Bridges in Dallas. Currently, both bridges are closed for construction making the once popular Trammell Crow Park an isolated and hard to reach place. You cannot drive there. It’s either a very long walk or mountain bike ride in. Travel by bicycle really is the best way to get around down here. Without worry of where to park, one can easily travel along the levees and floodway without fanfare.

Filling the void of an empty park are the native wildlife who seem to always take advantage of less peopled areas on the Trinity River. The ponds, shallow pools and occasional flood waters of the Trinity River in this area afford wading birds a great place to feed. Seen in the photos here are birds of the night, the Black Crowned Night Herons. With large eyes and a low profile, they agitate the mud drawing prey to the surface. 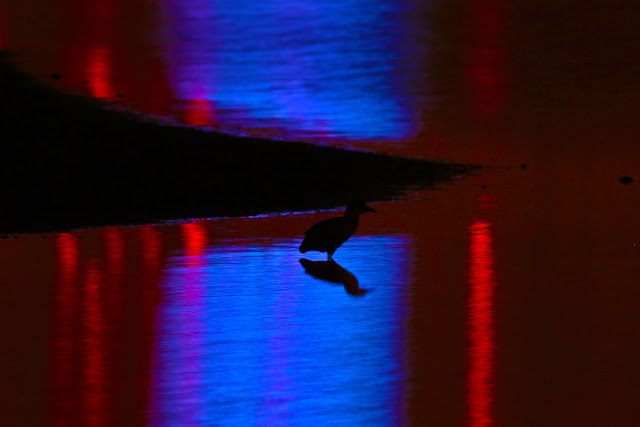 The mile distant Reunion Tower provides an ever changing color reflection on the water here, making for an interesting backdrop.

The fireworks were billed as a finale to an 8pm-10pm concert at the American Airlines Center. The pyrotechnics were planned to start at 10-10:30pm. Given the circumstances, dependent on the conclusion of a concert the fireworks did not start till after 12:30am. 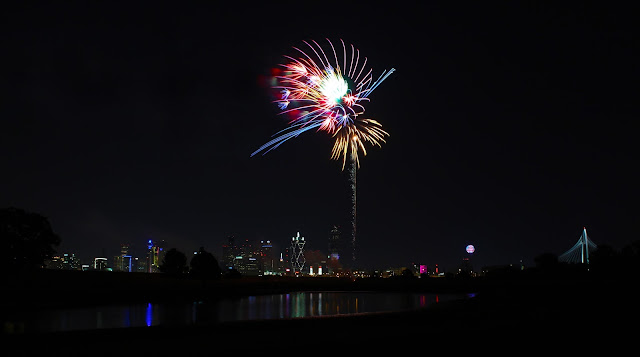 The brief show lasted under ten minutes. It had a variety of shells and a parachute shell of some variety that slowing drifted north with the slight southerly breeze. 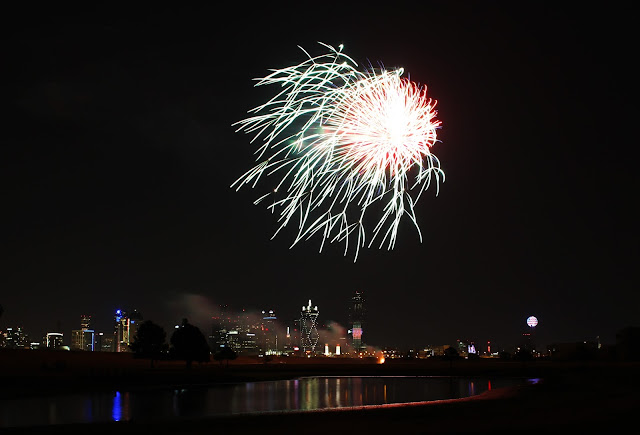 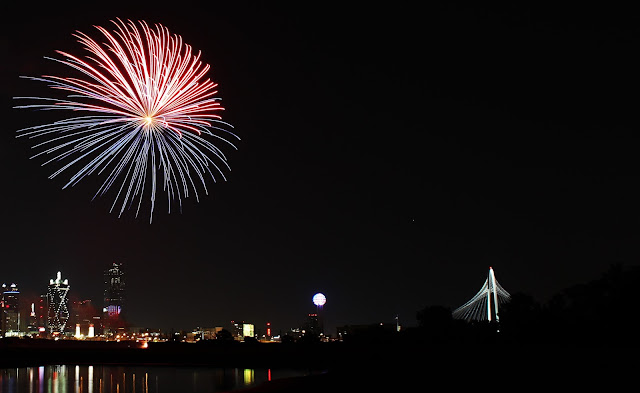