It was an early summer Thursday, June 26, 2014 to be exact that marked a significant moment for one of the most imperiled wading birds in the world, the Wood Stork. A mere thirty years ago, biologists said that by the year 2000 the Wood Stork would be extinct from the planet. It was on that Thursday, Sally Jewell, Secretary of the Interior announced the down listing of the Wood Stork from “endangered” to “threatened,” finding that the birds, which breed only in the Southeastern United States, no longer face imminent extinction.

Wood Storks were protected in 1984 under the Endangered Species Act after the birds had declined from approximately 20,000 pairs in the late 1930s to 5,000 pairs in the late 1970s, largely due to draining and development of wetlands. After the Wood Stork was designated as endangered, work began to preserve and restore wetlands and protect nesting areas. According to the US Department of Fish and Wildlife the most recent three-year population average ranged from 7,086 pairs to 10,147, however, the five-year average of 10,000 nesting pairs identified in the recovery plan as the target for delisting had not been reached.

The change in designation by the U.S. Fish and Wildlife Service marks an important step toward full recovery but will not reduce the species’ legal protection. Some believe political pressure by golf course corporations and homeowners associations pressured the move from endangered to threatened. The rigid enforcement protections for the birds and their habitat remain in place despite the change in designation.

About The Wood Stork Mycteria americana

Few Dallasites have ever heard of a Wood Stork. Only a handful of even experienced birders have even seen one.

Wood Storks (Mycteria americana) also called the Wood Ibis are large water birds that stand 4 feet tall and are the only stork in North America. They have wingspans as wide as 5 1/2 feet. They are mostly white, but have a black tail and many black feathers under their wings. Storks are related to ibises, herons and flamingos. Adults have no feathers on their head and neck, so the black skin underneath shows. This makes wood storks the only tall water birds with black, bald heads. Since they have no muscles attached to their voice box, they are very quiet birds.

Both nature centers have sightings of Wood Storks off and on from the 4th of July till August. The Wood Storks move around between feeding and roosting zones so they are not round-the-clock residents on any given day. You can call ahead and check for sightings. Both locations have confirmed sightings in 2014.

Wood storks use the massive beak as their source of food gathering.  The feed in water no deeper than their beak and catch a variety of things in their bill which they then toss their head back and swallow.

This technique is known as “grope feeding”.  This because the stork does not use vision in food collection, but instead does everything by touch. 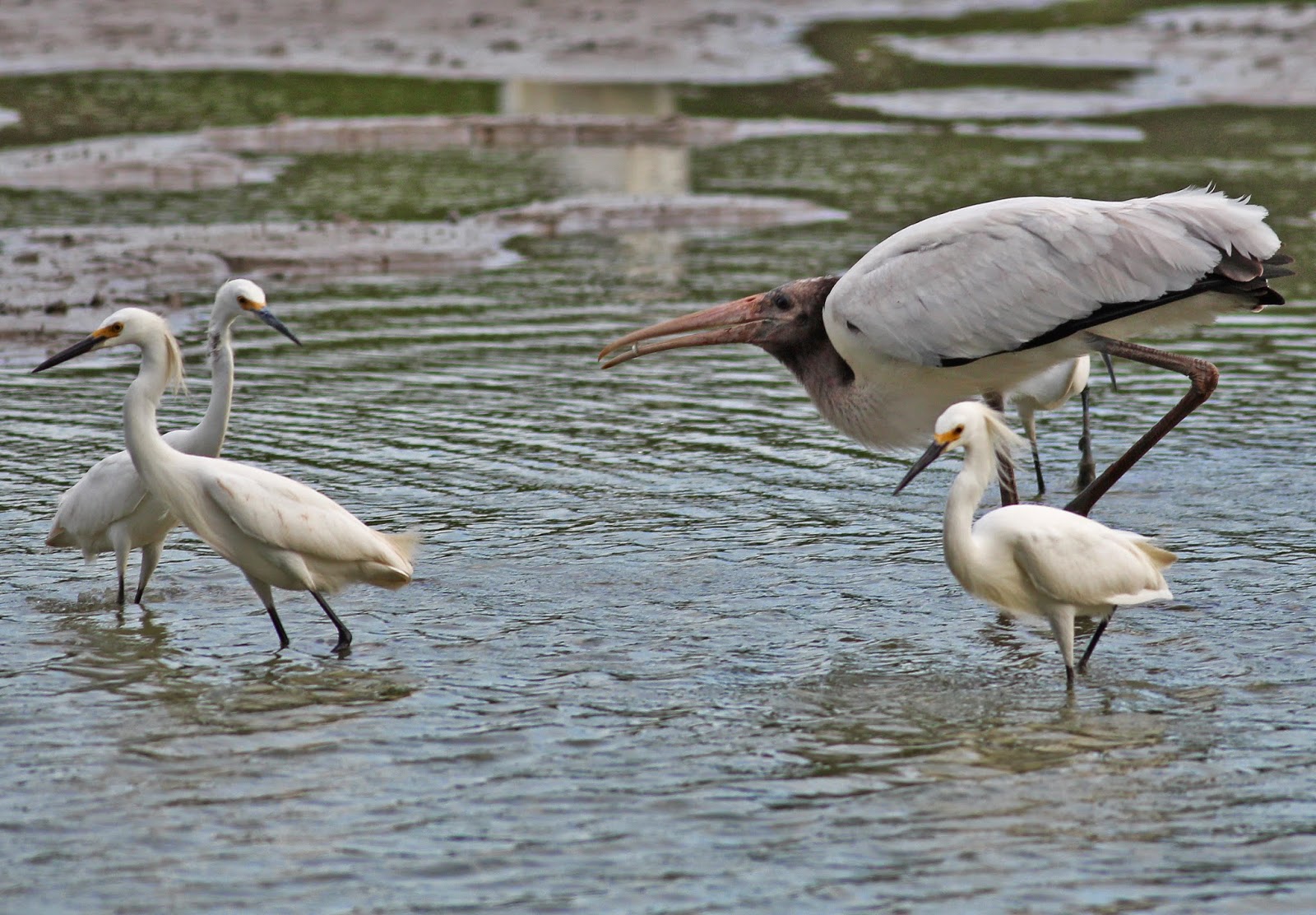 The reflex of the bill after it touches food is thought to be the fast of any reflex in the vertebrate world. When it feels a fish, the stork can snap its bill shut in as little as 20 milliseconds—an incredibly quick reaction time. 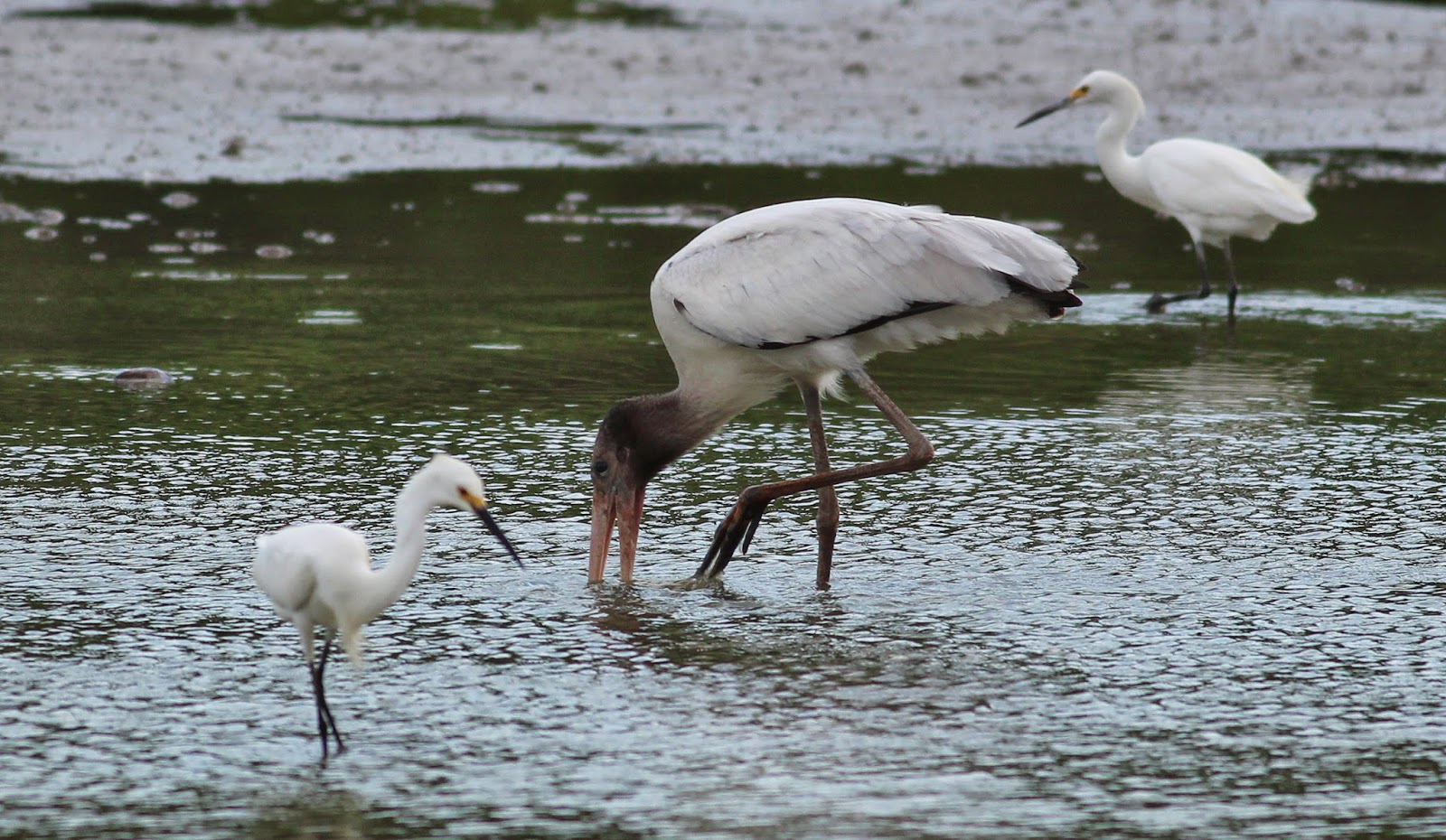 Their diet has been known to consist of fish, crayfish, salamanders, tadpoles, shrimp, frogs, insects and an occasional snake. Storks also use their feet to stir the bottom when collecting prey.  This technique startles the food from the vegetation into the beak. Some think that the water turbulence caused by this action simulates the water movement of a feeding frenzy, and can attract fish to become prey.

The seabreeze fronts that start in the Gulf of Mexico push northward during the daylight hours. They track roughly up the Trinity River from the Gulf of Mexico to about Corsicana. If they are long lived fronts they can make it as far as the Dallas area with a pronounced gulf smelling breeze and cool humid laden air. Most evenings, like the photo above illustrate, the storms make it to Navarro or Ellis Counties.

Spring 2014 came in late, cold and dry for North Texas, third year in a row. Dry years stacked on top of one another start changing the look of things down here on the Trinity. Ponds and small lakes don’t hold as much water or none at all. Those water bodies that do have some depth to them go dry in June rather than August.

The weather might be late but a few brave Wood Storks ventured into the Great Trinity Forest weeks ahead of years previous.

In years past, especially in 2011 and 2012 there were many overbanking events with the Trinity River that filled Little Lemmon and Lemmon Lake. These events created ideal habitat for Wood Storks which gathered in the hundreds seen here in 2012

And of course the African safari like backdrops of wild pigs wading across Lemmon Lake with well over 100 Wood Storks and hundreds of other wading birds in the lake:

The past half century has borne witness to dramatic changes in the quality and quantity of wildlife habitat. Throughout the United States, Mexico and South America, wetlands continue to be drained and filled, forests cut and fragmented, and grasslands developed for construction. Other less intrusive land use practices like golf courses have upset the natural balance as well.

http://www.dallasnews.com/sports/golf/headlines/20121129-city-att-smu-plan-championship-golf-complex-in-southern-dallas.ece
From the article written by Bill Nichols and Rudolph Bush “Suhm and Rawlings pledged that the Great Trinity Forest will not be disturbed by the golf course development. The land for the course will be limited to the bare landfill property.  “They won’t be doing things in the forest. No taking down trees. They will be planting trees,” Suhm said.”

One could take a guess as to whether or not those were sincere promises now.

Many of these habitat changes from natural woodlands to managed groomed greenspace are not what they appear. While forest and woodland cover in some areas has actually increased, the quality of those habitats compared to the original woodlands may not be similar at all because of changes in vegetation composition and artificially abundant predator populations.

Without some heavy tropical systems brewing in the Gulf this summer, the habitat for wading birds will be quite scant in the Great Trinity Forest. The moonscaped clearing of the Great Trinity Forest and landfill areas for the golf course will impact the wading bird habitat that use the pocket ponds in that area during the height of the summer months. Perhaps it will be a permanent change.

The rare places left inside the city limits of Dallas that attract such wildlife seem to be in real peril from planned development. These smallish ponds and drying beds are the real endangered species of note. Oh so rare and important to so many species of birds, the world over, who seek out the water here for habitat. It would be a tremendous loss to the city as a whole, we would all be poorer for it, if the planned development here impacted the wildlife in any way.

Where does a federally protected threatened species fit into the mix remains a cloudy picture.

Wildlife, both fleet footed and on the fly, use the Trinity River as a main artery of travel from the parched uplands northwest of Fort Worth, clear to Trinity Bay on the Gulf of Mexico.

The Wood Stork that we see in Texas, moves inland after nesting along the Gulf of Mexico during the spring. The birds seek out shallow drying ponds and water bodies where concentrations of fish exist in great numbers. A reverse migration of sorts that when seen through human observed reports read like a ten mile march up the Trinity every day from May through July.

The easiest way to track movements of Wood Storks or any migratory bird species is to use Ebird, a google map based website http://ebird.org/ebird/map/ which allows the user to search for specific species, locations, dates and years that birds have been spotted. 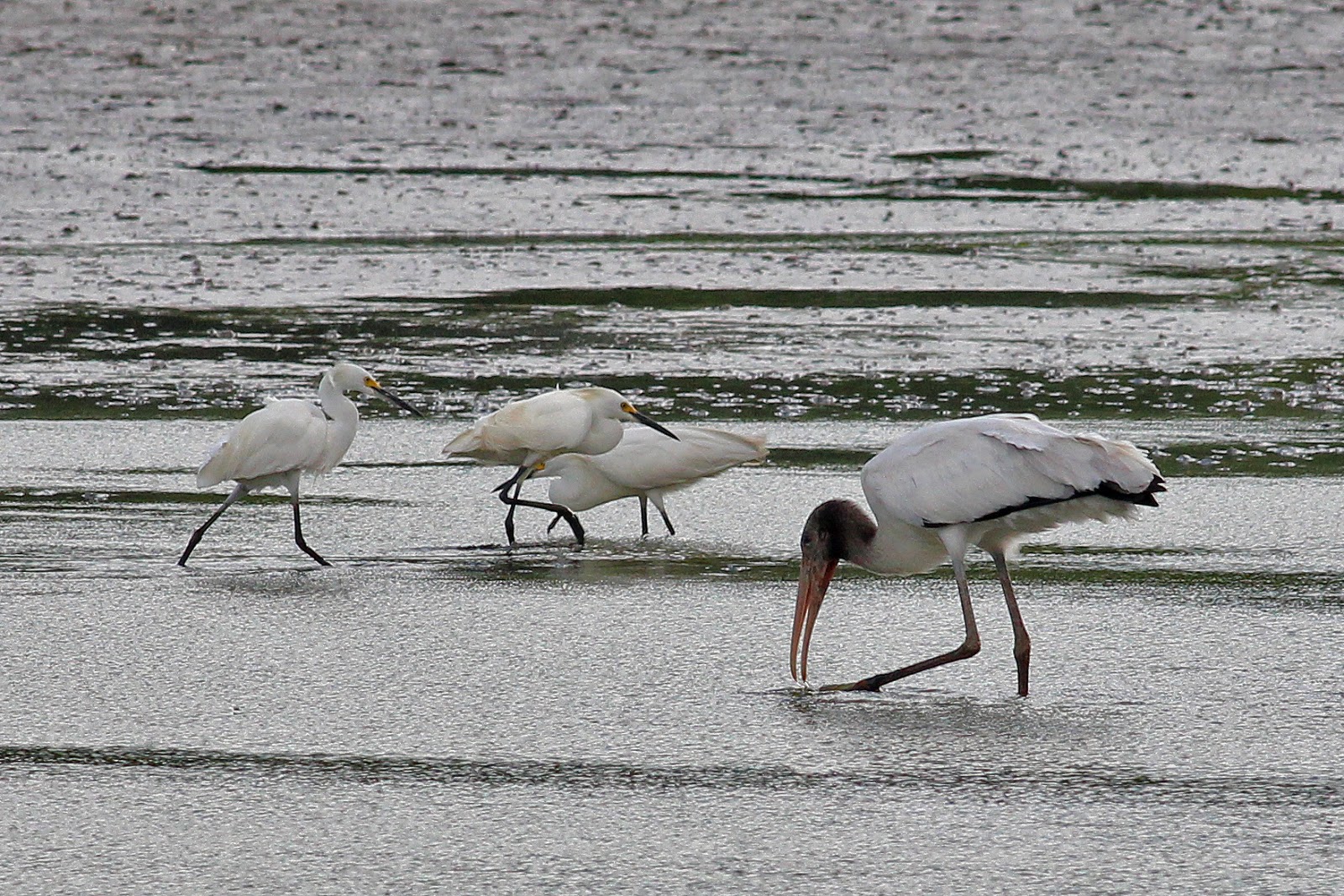 Wood Stork migration and dispersal has likely been this way for hundreds or thousands of years, a route implanted upon the DNA of the species who frequent the river. Wood Storks are most likely no exception to that process. Many of us humans were not born into the intimacy of our natural environs, using tools like Ebird gives us the ability to see the ebbs and flows of the natural world transformed into data we can understand. 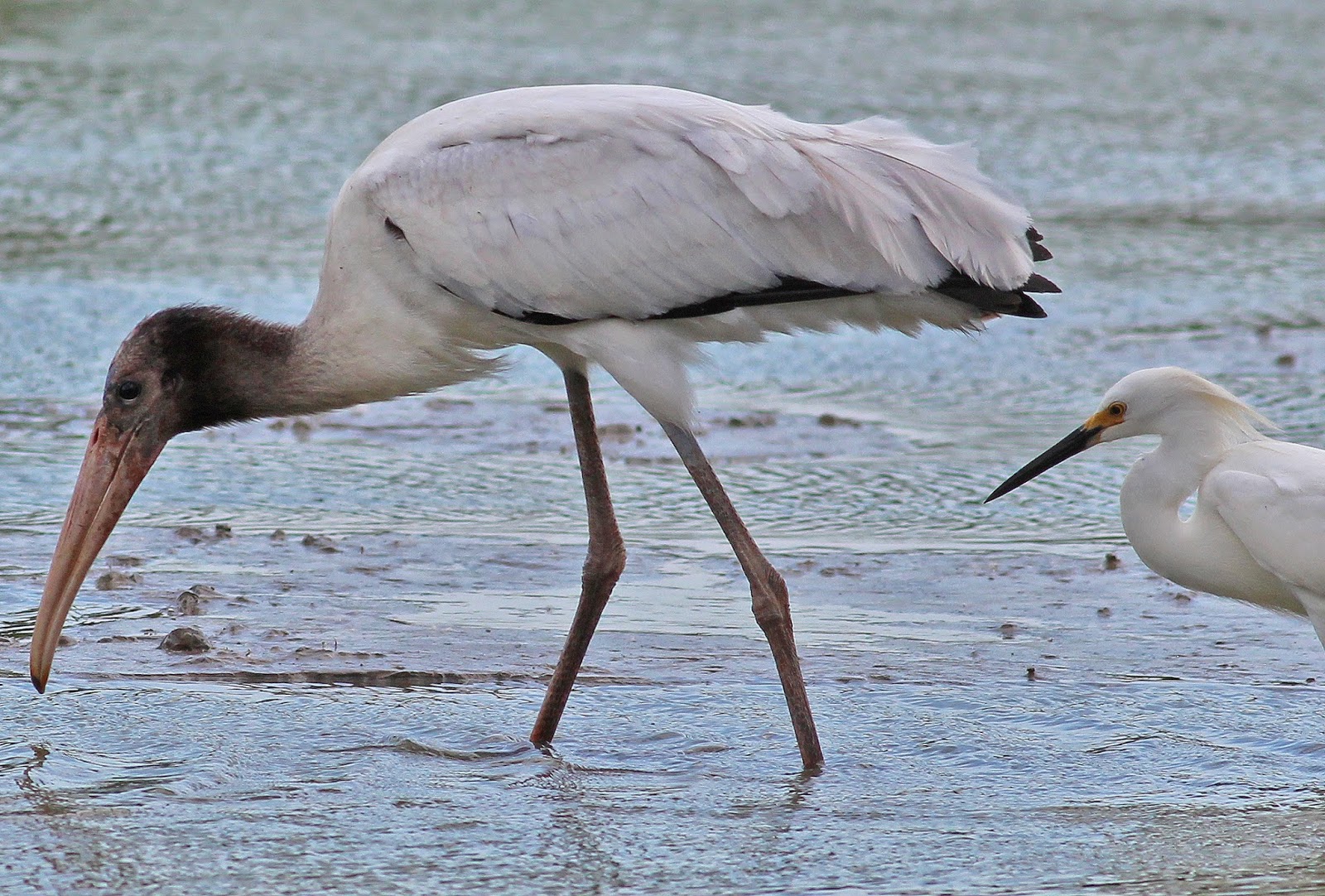 As mentioned earlier, Wood Storks have a unique feeding technique and require higher fish concentrations than other wading birds. Optimal water conditions for the Wood Stork involve periods of flooding, during which prey (fish) populations increase, alternating with drier periods, during which receding water levels concentrate fish at higher densities coinciding with the stork’s nesting season.

The Wood Stork, Bald Eagle and many other species of migratory birds owe their current existence in the United States to the determined, last-ditch efforts carried out under the legislative milestones of the Endangered Species Act. Attempting to pull species back from the brink of extinction can be an expensive and contentious proposition. 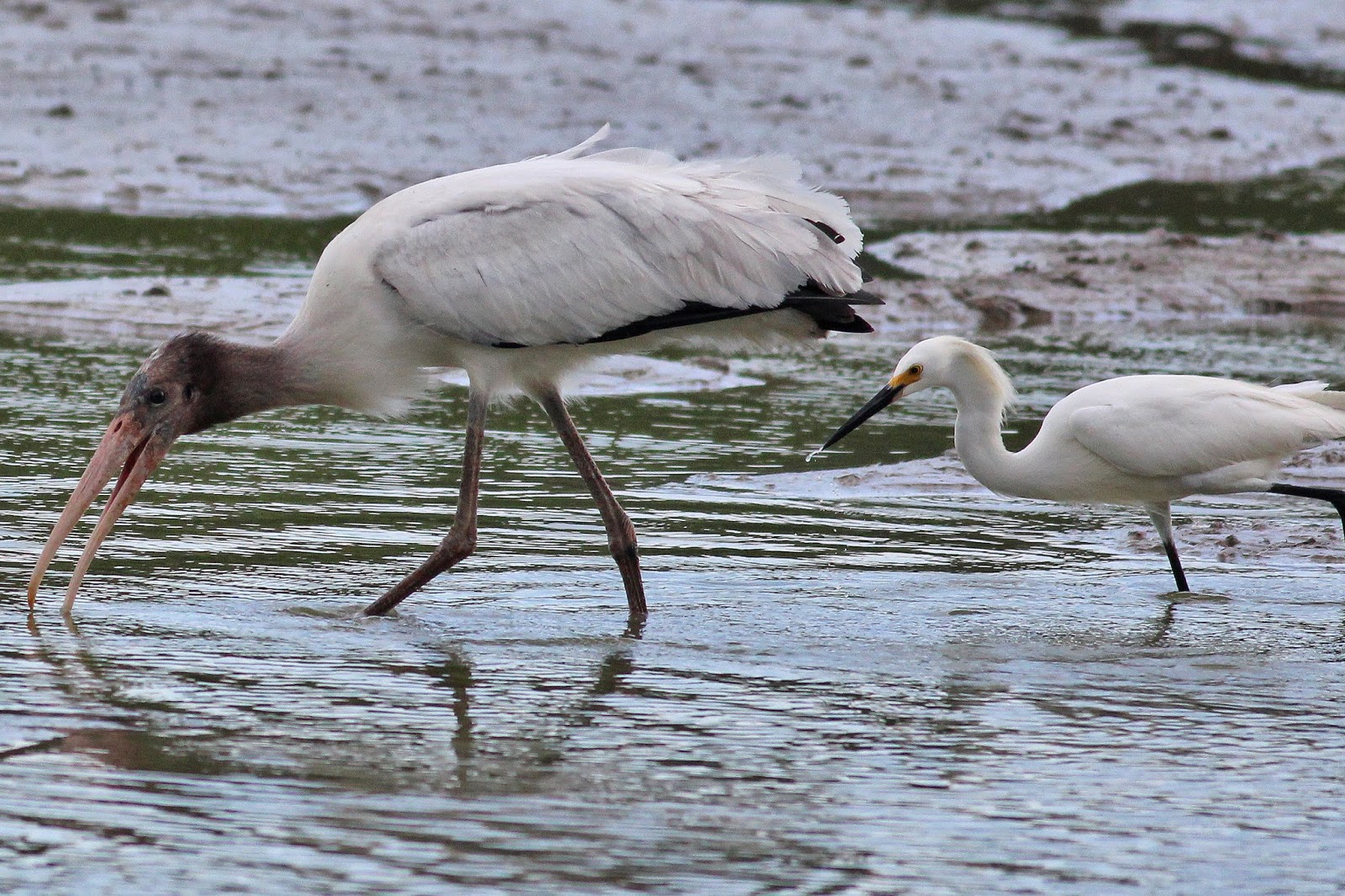 Even today, despite considerable conservation gains in the past few years, many challenges still threaten to drive species away from healthy populations, and onto the endangered species list. There are many cheap and smart ways to increase habitat for these type birds in the Great Trinity Forest with no impact on planned “World Class” amenities as they are called for the area. Money can buy a lot of things, almost anything, a Wood Stork and their free will to call this neck of the woods home is not one of them.