Dawn on the longest day of the year lights the eastern sky well before 6am, the earliest of early sunrises. The solstice fell on a Saturday in 2014 a day chosen to venture into the large wetlands and swamps beyond Big Spring in the Great Trinity Forest. Most people avoid such areas full of high water, snakes and dense vegetation. A difficult hike and wade through some of the harshest topography in Dallas.

Jim Schutze who writes for the Dallas Observer referred to this area as “Nature Post-Apocalypto” in a 2012 article entitled A Bushwhacker’s Guide To Dallas. A part of town that was left to be forgotten due to the high floods that came with every storm in the watershed.

The goal for this hike was to push north from the relative serene nature of Big Spring and hike northwest through some great swamp country, under 175 and up into an area Tim Dalbey calls Bruton Bottoms. A mass of felled timber and ephemeral wetlands that make for some very tough going.

Getting there is a little bit of a trick from Big Spring. We needed to cross some private property owned by Father Richard Hill and his wife Paula Pemberton Hill. They were kind enough to grant us access across their property towards Bryan’s Slough, Oak Creek and White Rock Creek. That land and many of the adjoining parcels were part of the larger Edward Case Pemberton farm that was purchased from Margaret Beeman Bryan, the widow of John Neely Bryan founder of Dallas.

It would blow away most long time Dallasites and natives to know that places like this not only still exist but the fact that they exist at all. Dallas as a city gave up on this land many decades ago.

For the last forty years, the area fell into extreme neglect. The grid of old streets served as a favored illegal dump for cars, tires, shingles and the occasional human. During those forty some odd years of abandon, the outer areas of this bottom land began to heal. Trees slowly began to take root, old farmed areas went to seed, then weed, then tree.

Roosevelt Heights sits just a hair above three creek intersections on a small peninsula rise of land running north to south bisected by US 175. In the southern half, large wetlands sit on either side of the peninsula. In the last half decade these swamps have gone bone dry no later than mid June. The water height and impoundment is determined by rainfall and to a larger extent by beavers and their engineering of dams in the area.

Roosevelt Heights is named after President Franklin D Roosevelt and his New Deal programs that are believed to have spurred development of low income housing in this area. Reading up on the background I think most of the Roosevelt Heights area was developed in the post war boom of the 1940s at a time when Dallas saw an influx of skilled African American laborers from East Texas. The epic drought of the 1950s in Dallas allowed home construction in areas well within the 100 year flood plain. Unaware for years that their new homes were in peril when normal rain patterns returned.

Roosevelt Heights grew in the interim. A population of less than a thousand, three churches, two grocery stores, hair salons and a sundry store or two. It was a real community. That came to an abrupt 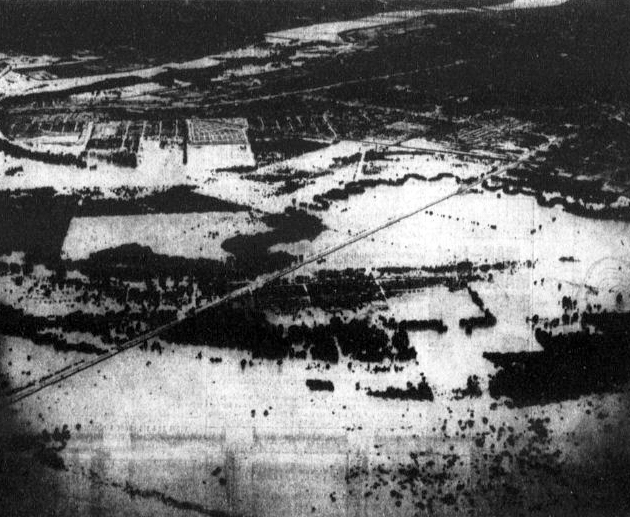 The 1960s brought flood after flood to Roosevelt Heights. The flooding was magnified by new levee construction upstream and urbanization of former farming lands.

The result was not a devastating flash flood but a backing up of flood water from the Trinity into the White Rock watershed. In the early 1970s, talk began of flood control improvements. Rochester Park was earmarked for a levee and Roosevelt Heights was bought out by the city. In the lower section of Roosevelt Park, the last homeowners around 1973. North of US 175, one homeowner, at last check, still resides today.

Masters of Construction and Engineering — The Great Trinity Forest Beavers

The beaver pictured here came to check us out and see what we were up to. Friendly in every way, it approached within twenty feet or less of us and watched us with great interest. Perhaps it had never seen a human before and wondered what we were.

Once among the most widely distributed mammals in North America, beavers were eliminated from much of their range in the late 1800s because of unregulated trapping. With a decline in the demand for beaver pelts, and with proper management, they became reestablished in much of their former range and are now common in many areas.  Beavers are found where their preferred foods are in good supply—along rivers, and in small streams, lakes, marshes, and even roadside ditches containing adequate year-round water flow.

In areas where deep, calm water is not available, beavers that have enough building material available will create ponds by building dams across creeks or other watercourses and impounding water.  Beavers dams create habitat for many other animals and plants of Texas. In winter, deer frequent beaver ponds to forage on shrubby plants that grow where beavers cut down trees for food or use to make their dams and lodges. Raccoons, and herons hunt frogs and other prey along the marshy edges of beaver ponds. Migratory waterbirds use beaver ponds as nesting areas and resting stops during migration. Ducks often nest on top of beaver lodges since they offer warmth and protection, especially when lodges are formed in the middle of a pond. The trees that die as a result of rising water levels attract insects, which in turn feed woodpeckers, whose holes later provide homes for other wildlife.

Beavers have constructed large and complex sets of dams through the bottoms here, keeping much of it flooded through one of the driest spring seasons on record in Dallas.

Their tireless work has left large sections of the woods here submerged for most of the year, forming great habitat for ducks, wading birds, aquatic insects and fish. The water is quite clear and in some spots has a hard bottom suitable for careful wading.

Sedge grasses in large pockets like the one above provide critical wetland habitat for dragonflies, crawfish and in wet seasons fish. These sedge patches are often overlooked by many but perform a critical role in establishing biodiversity in the Great Trinity Forest.

Alligator weed Alternanthera philoxeroides is a perennial plant native to South America and often forms very dense stands or mats that make shoreline access difficult in the Great Trinity Forest.The water loving aquatic stems are hollow and can be single or branched. Leaves are opposite, long, elliptical or lance-shaped up about an inch wide and half a foot long with a prominent midrib. Often roots develop at leaf nodes. Soft, whitish hairs are found in the leaves. Single flowers are small (about 1/2 inch in diameter) white, fragrant clusters of 6 to 10 florets, borne on long branches (to 3 inches). The flowers resemble those of white clover. A single seed develops within the fruit.

When alligator weed invades waterways it can reduce water flow and quality by preventing light penetration and oxygenation of the water. It can also reduce water bird and fish activity and cause the death of fish and native plants. Alligator weed mats create a favorable habitat for breeding mosquitoes. Alligator weed is also difficult to control and such is prohibited from owning.

At first glance one would wonder how hibiscus could naturally grow in Dallas wetlands. The second question is who planted them? The answers are that they are native to North Texas, have always grown here and thrive naturally just as they have for centuries in this special swamp. These plants go by the name Halberd-Leaved Rose Mallow due to their distinctive shaped leaves that resemble a medieval battle axe sword called a halberd. 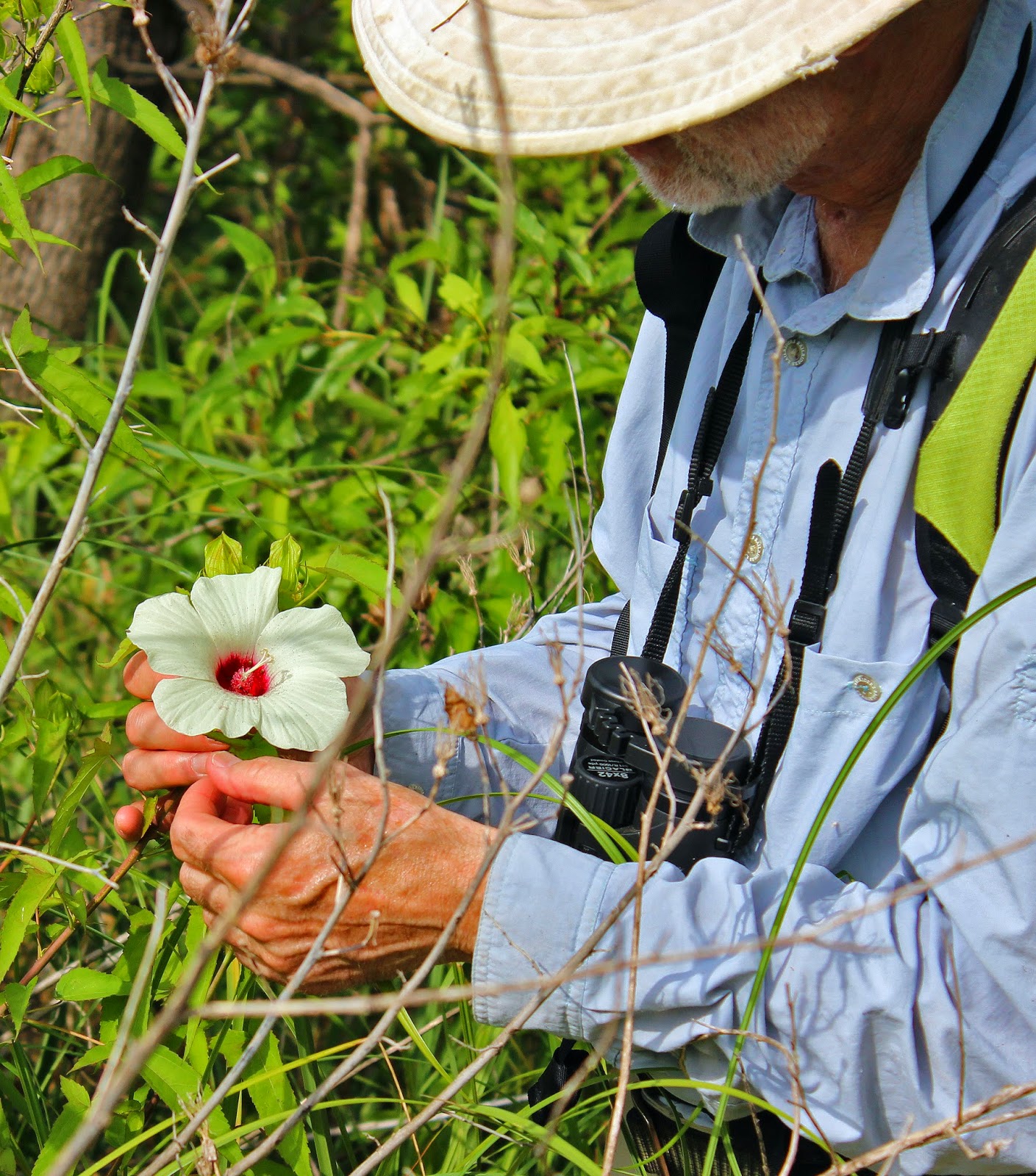 The Halberd Leaf Rosemallow is commonly known by its Latin name Hibiscus laevis. Sometimes it is also called soldier hibiscus. The “militaris,” “soldier” and “halberd” parts of its various names allude to the similarity between the shape of its leaves and the lance end of a medieval pole-ax called a halberd. The leaves have pointed tips and a broad, deeply lobed base with a silhouette similar to a double-headed ax. Unlike many hibiscus family members, the Halberdleaf rosemallow has smooth leaves and stems.

Each plant grows upright, reaching a height of 3 to 6 feet. Each five-petal blossom grows out of a leaf axil, the point at which a leaf joins the stem.

Hibiscus blooms emerge from the bottom to the tip of the stem. The Lady Bird Johnson Wildflower Center notes that the flowers may bloom from May to November, depending on the region. In the Great Trinity Forest they bloom only in the mornings from June through October. The blooms will stay open longer on cloudy or rainy days.

Many volunteer hours are now being put to good use in studying the flora and fauna of Big Spring and the immediate wateshed. Continuing the great hands on management plan developed by Billy Ray Pemberton plus the added knowledge of many experts will help keep the aesthetic of the place going for generations to come. It will also allow many of the plants that were traditionally mowed to flourish and bloom out for years to come. Big Spring has a number of  native hibiscus growing on the conservation and future landmark footprint. They should be blooming in the next several weeks.

As we walked back to Big Spring, in the far echoing hollow we could hear the faint yell of Master Naturalist Jim Flood and Geoarcheologist Tim Dalbey who had been conducting a weekly plant census. Horse trading field notes, Jim Flood pointed out some unique specimens of plants he had gathered for further study. A couple days later, he reported that one of the plants had not been seen in Dallas County for a very long time and was originally first documented by none other than famed Botanist and La Reunion Colonist Julien Reverchon. An important find.

As we learn more about Big Spring, what makes the woods tick, how the swamp and wetlands connect with Big Spring as an ecosystem we can begin to paint a picture of how special this part of Dallas is and something that should be forever preserved and protected.