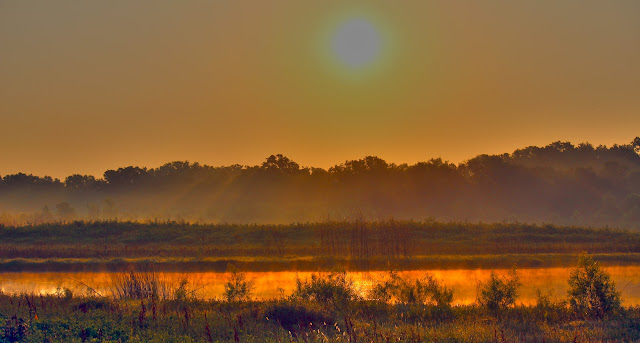 The sun rises early in June. Before 7am it climbs above the Trinity River in Dallas quickly burning off the fog and dew that built up the night before. The early morning is a special time to be on the river and one that few people experience. Myself included! 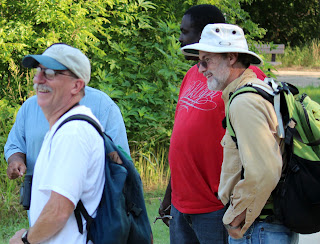 Joining me at the Loop 12 Boat Ramp are a pair of guys with whom I have hiked with before, Bill Holston(left) and Scott Hudson(right). The photo to the left was taken on the Great Trinity Forest Trail at Little Lemmon Lake. The fishermen in the photo were giving a detailed explanation of the snakes(really big ones) they had just seen minutes before. It was hilarious. Everyone laughing and having a great time. I always run into great people like this in the Great Trinity Forest. Everyone seems to have a funny story to tell.

This early morning portion of our hike was a great lighthearted walk up the Trinity River Wetland Cells near the community of Joppa. The early Saturday morning hike was a primer to a more serious mid-morning hike later in the day which will be in another post.

There is always something special about making fresh tracks in the early morning dew. Two days after a rain with the soil still damp in places we were the first humans to travel up this way in at least a few days. The only tracks we saw were that of coyote, fox, feral hog and beaver. Sitting in the middle of a metropolitan area I’m still amazed so few people visit.

An early morning visit gives one a better look at some of the noctural birds of the river. Below are some of the birds we saw in more or less chronological order moving from Loop 12 north up towards the Union Pacific trestle. 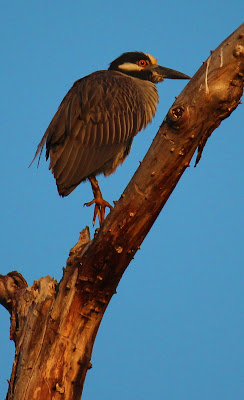 The Yellow-Crowned Night Heron (Nyctanassa violacea) The yellow-crowned night heron forages for food both in the day and at night. Most of the yellow-crowned night heron’s diet is made up of crustaceans like snails and crayfish. It sometimes eats fish, eels, mussels, frogs, tadpoles, aquatic insects, snails, and small snakes. It either stands and waits for its prey to swim by or wades in the shallow water and slowly stalks its prey. 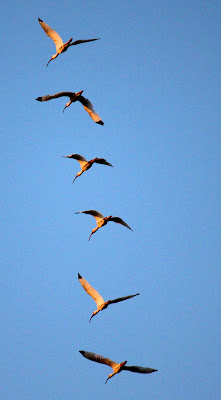 The White Ibis (Eudocimus albus). Highly sociable in all seasons, the White Ibis roost and feed in flocks. White Ibises fly in lines or V-formations, with several quick flaps followed by a short glide. When groups wade through shallows, probing with their long bills, other wading birds such as egrets may follow them to catch prey stirred up by the ibises.

Until recently the White Ibis was an uncommon sight here in Dallas. From late May through September they are now easy to spot along the wetland cells and in the shallow evaporating lakes that dot the Great Trinity Forest.

I always look skyward when these formations fly over. Often mixed in with the White Ibis are White Faced Ibis and Glossy Ibis which are much a rarer sight in the DFW area.

The Tricolored Heron (Egretta tricolor). This one had us stumped. I’ll be the first to admit I know very little about birds and count on people like Bill and Scott to fill me in on what flavor of bird we are looking at. Thinking this was a juvenile bird of some kind we moved on. I emailed Jim Yancey a local bird expert around White Rock Lake. He replied that it’s a Tricolored Heron which is usually a coastal bird. Unique to see here inside the city limits and quite a treat.

The Indigo Bunting (Passerina cyanea) Bill and Scott heard the call of this bird from afar and identified it as a bunting but we never saw it. I blindly aimed at the far tree it was calling from and hoped it would appear in a photo. Sure enough it did. They guessed Painted Bunting, in this case it was an Indigo Bunting.

The male Indigo Bunting is a rich, deep blue all over, but may appear dark and blackish in poor light. A popular memory-phrase for the song of the male bunting is “fire-fire, where-where, here-here, seeit-seeit.” Indigo Buntings frequent forest clearings and second-growth habitat in the East and Midwest. These are small finch size birds and probably more often heard instead of seen. This bird might have a mate and a nest north of the Linfield Road dead-end(about 300 yards) between the wetland cell and the Trinity River.

The Great Egret (Ardea alba). The great egret is the symbol of the National Audubon Society and represents a conservation success story. The snowy white bird’s plumage made it popular quarry in 19th-century North America. Great egrets were decimated by plume hunters who supplied purveyors of the latest ladies’ fashions. Their populations plunged by some 95 percent. Today the outlook is much brighter. The birds have enjoyed legal protection over the last century, and their numbers have increased substantially. This particular individual is a common site on this roost and around the shore of this particular cell. I have photographed in numerous times in the last year or two near the Union Pacific trestle.

The Redwinged Blackbird (Agelaius phoeniceus). A common site here in Dallas this time of year, these marsh loving birds perch high on weeds, branches and limbs making their boisterous call. The bird in the photo above is perched on a branch near the Fellows Lane gate and dam. Downtown Dallas serves as a background. 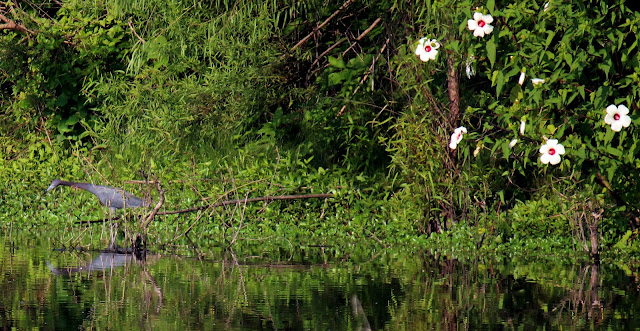 There is post-breeding dispersal to well north of the nesting range, as far as the border between the US and Canada.  The particular Little Blue Herons pictured here are at Honey Springs near Joppa. The hibiscus plant to the right is a bit of an oddity and something I have never noticed before. My guess is that it was planted when this area was part of the Sleepy Hollow Country Club. 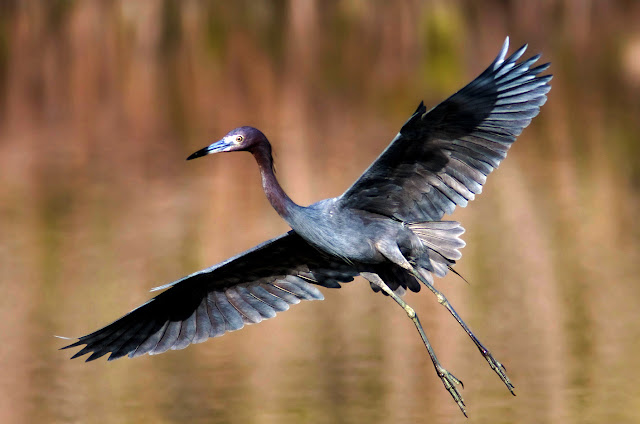