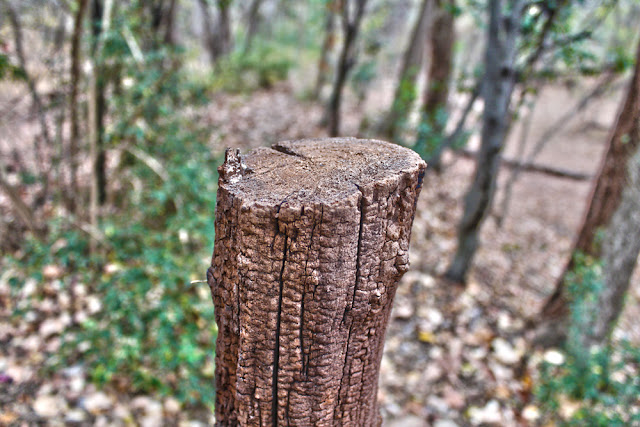 There was a time when the barbed wire hung here enclosed the finest Swiss milking cows in all of Texas. The native wild rye grasses produced perennial champions of best tasting milk contests twenty years in a row at the State Fair. The Bois d’Arc fenceposts are the only addition to the Great Trinity Forest that old dairy left behind. Standing as silent sentinels for over a century they have weathered every storm and flood Dallas as a city has seen. In the dust bin of history these needle in a haystack old fence lines on White Rock Creek serve as testament to a time when this wild land was briefly tamed for a different use. Given half a decade the river took it back.

For The Price Of One Hundred Million Dollars
In late 2012, talk has been of taming the bottoms here once again for new uses. Promised world class facilities sure to rival that anywhere else in the known universe. 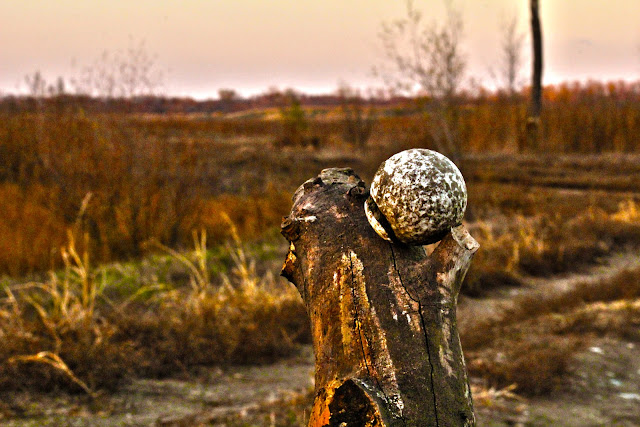 Many millions of dollars were spent to remove the old world class facilities from our memory. In an age old folkloric motif modelled on the story of Shechem, past mistakes were seceded back to the river never to be used again. An effort that Roman general Scipio Aemilianus Africanus who is heralded as salting Carthage would be proud of. So complete in dismantlement than only random fossilized golf balls remain.

The social and economic headwinds blow strong through this part of Dallas. The payoff of big ticket revitalization projects in the last ten years have yet to trickle down to the most important beneficiaries. The residents. I hear their frustration. Some of it is heartbreaking.

The promise of a brighter future is all one can hope for in a place many have written off as hopeless. The razing of Turner Courts and the new replacement taking the same footprint are met with guarded caution. We’ll see.

For The Price Of A Roll Of Flagging Tape

The river not only reclaimed that 36 hole golf course near Joppa but also the trail on the opposing side of the river. Erased. The Bois d’Arc Trail through Rochester Park(newly named William Blair Park) roughly follows the path of these old fenceposts down the west bank of White Rock Creek. The roughly mile and a half long trail eventually terminates at the confluence of White Rock Creek and the Trinity River on a knife edge briar patched peninsula.

The undulant course of White Rock Creek slowly fights it’s way through the last mile of Trinity River Bottom, hesitant to give up it’s own water to the larger river beyond. Following the bank along the creek here is a maddening chore even for the most dedicated hiker. The ever thickening greenbriar thickets block travel through many of the sharp turns and suggests traveling at a fifty yard distance beyond.

The river reclaimed this trail in 2012. A series of large flooding events in the early part of the year coupled with little human use vanished the trail. A previous visit nearly a year ago is chronicled in a previous post here: William Blair Park The Perimeter Trail The GPS data for that hike is still relevant and can be found on the Garmin website Perimeter Trail and Miller’s Ferry. Coordinates 32.734445, -96.739459 Google Map for Trailhead

The low frequency of trail traffic coupled with the flooding events have obliterated the eastern half of the trail system. It’s not a bad thing. Nature took it back. In many cases neglected trails often fall into disrepair and erode. This leads to more problems. The Trinity River simply overgrew these trails. Hiking their shadow is still easy although the trailhead is now very hard to find.

Finding the trailhead in 2012 is not as easy as it was in 2010 when the above photo was taken. The grasses have since reclaimed the trail and the flagging tape has long since faded. 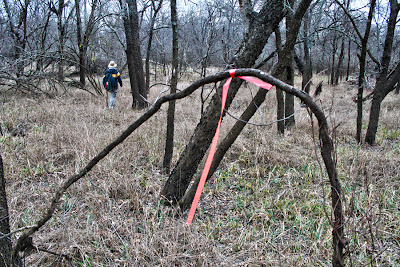 Same spot in the woods as it looks in 2012. In an effort to make the hike more accessible I brought a roll of flagging tape along to remark this route. The route is not hard to follow keeping the creek to the east and within sight making ones way cross country in dry weather is a pleasant walk. Subject to flooding and prolonged drying periods this is a great trail in drier winter weather. 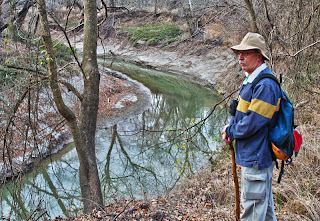 Perhaps the only man made trail marker on this route is a fiberglass post, pointing towards the direction of White Rock Creek’s mouth. If one were to make a left instead of a right, the route leads out on an omega shaped bend in the creek which can mislead some.  In the future, this easterly route might serve as a worthwhile link to White Rock Spring which lies some distance to the east from this spot.

The banks are very steep here and finding a crossing point has proven difficult. I’m sure there is a good ford crossing along the creek in this stretch but I have not pursued the goal of finding one.

The novelty of walking down White Rock Creek free of fences and flood debris is one that few experience. The walk is quite easy and would be an acceptable place to bring dogs and children along.

Reaching the trail junction of the Bois d’Arc Trail and the Buckeye River Trail the less trodden path takes one out on a peninsula formed by the mouth of White Rock Creek joining the river. The greenbriar vines are quite thick here and sure footed steps are required to insure safety from the steep drop offs on either side. This was also trimmed back on the recent trip there and should now be more manageable.

The elevated view from the peninsula is worth the hike. A view few will ever see. 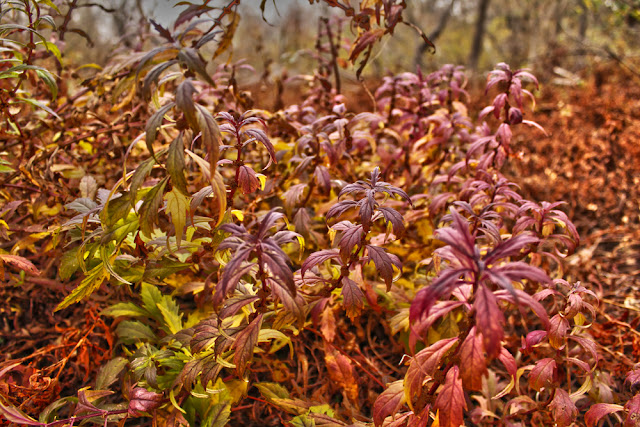 The trail from the mouth of White Rock Creek towards the Buckeye Grove does not meander far from the Trinity River. Passing some of the larger Bur Oaks, Pecans and Cedar Elms that were once used as shade trees by the milking cows of Metzger’s Dairy.

The trail constricts as it approaches the Buckeye Grove. Surrounded by several acres of thick Chinese Privet the Buckeyes might be hard to spot this time of year unless one knows what to look for. The Buckeyes annually bloom in the middle of March and are often some of the first spring flowers on the Trinity. A must see. 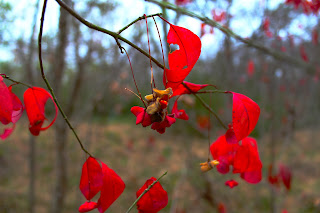 This time of year, around Christmas, the Eastern Wahoo Tree makes it’s own color on the river. Known as “The Burning Bush” the brilliantly colored leaves and seed pods offer some color in what is an otherwise muted winter setting. The tree of note is just north of the Buckeye Grove and can be easily seen from some distance through the woods. 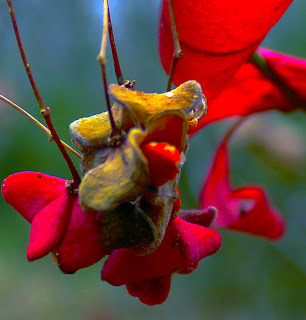 The unpaved Buckeye Trail eventually links up in this area with a concrete trail built several years ago to accommodate those visitors needing ADA access. How someone with a wheelchair or hoverround rascal scooter can negotiate the climb over the levee to access the concrete trail beyond remains a mystery to me.

Before being bulldozed and paved over, the old natural surface Buckeye Trail was a great hike. Gated by a grove of cedars at the entrance the trail opened up into a nice long walk peppered with trees to the river.

The once open and canopied view of the old Buckeye Trail is now somewhat blocked by Giant Ragweed that grew up on their side of the trail after bulldozers cleared a large swath of forest for a 6 foot wide path. The latest plans from the city envision a similar trail, called the AT&T Trail near a future planned golf course bearing a similar name. That trail if built using the same construction standards as the Buckeye, would remove over half a million square feet of virgin hardwoods. Unlike the former grazing areas reclaimed by the river, the AT&T Trail would run through an area never logged or farmed. Something to think about. 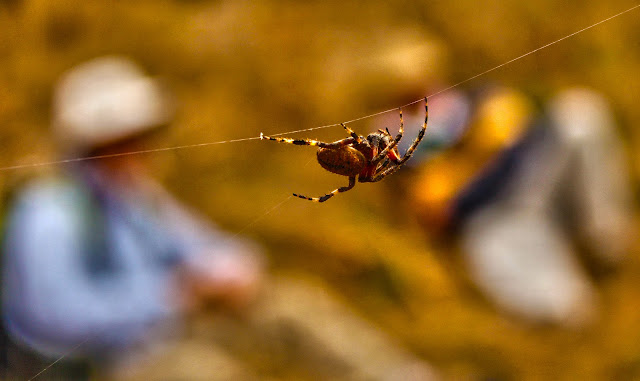 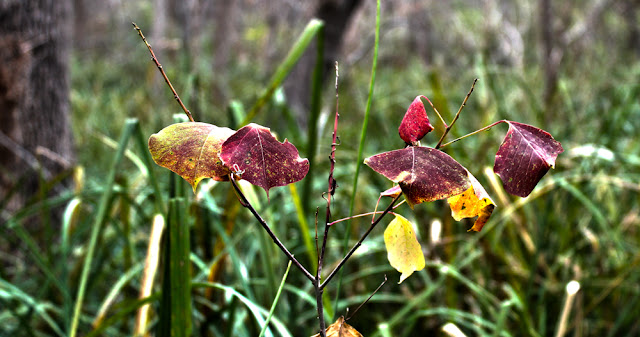 For The Price Of A Cup Of Tea 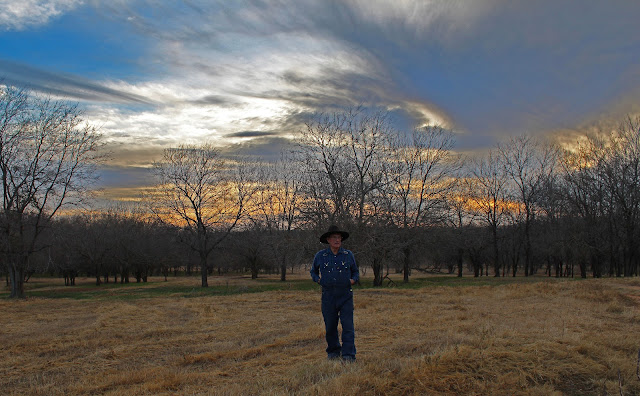 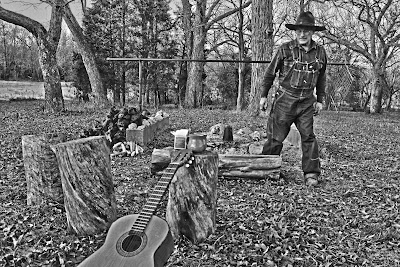 Last season’s corn cobs for fire starter. The historic June hailstorm’s dead fall limbs for fuel. An old guitar. A box of tea. A slow to heat coffee pot that gives you enough time to stump chat about the land, the weather and next year’s crop. The simple pleasures in life that have no price. 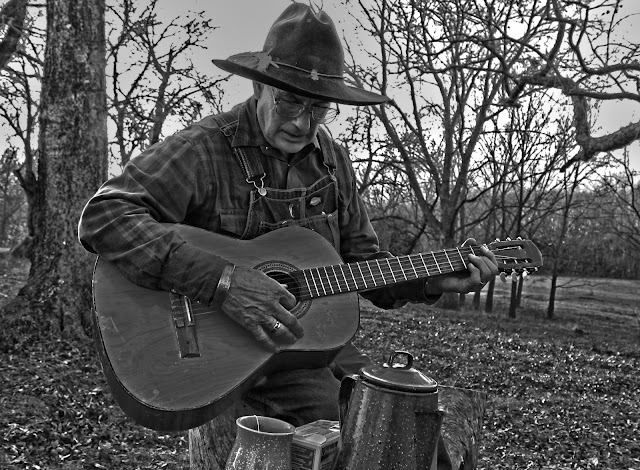 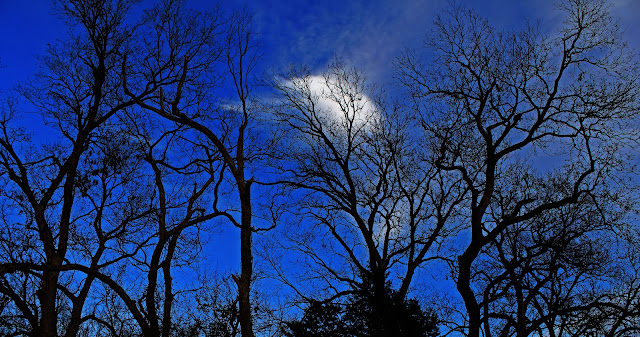 Under a grove of pecans and walnut trees that have fed man and beast alike for centuries Billy Ray Pemberton sits with his bible, guitar and mug; strumming songs of yore and songs he wrote himself. Subjects range from the land, his friends and thoughts on the world that surrounds him. Soft spoken in conversation, his true storytelling is done through his guitar. The richest man in town.