Ducks as a general rule are so uniform is size, shape and coloration that it is impossible to tell one member of a flock from the next. In the world of birds the ones that attract the most attention are usually the ones who become the target of prey. Bred out over countless generations the genetic differences are muted to the point that all birds to humans or predators look identical. It is a rare sight to see a bird with different coloration. 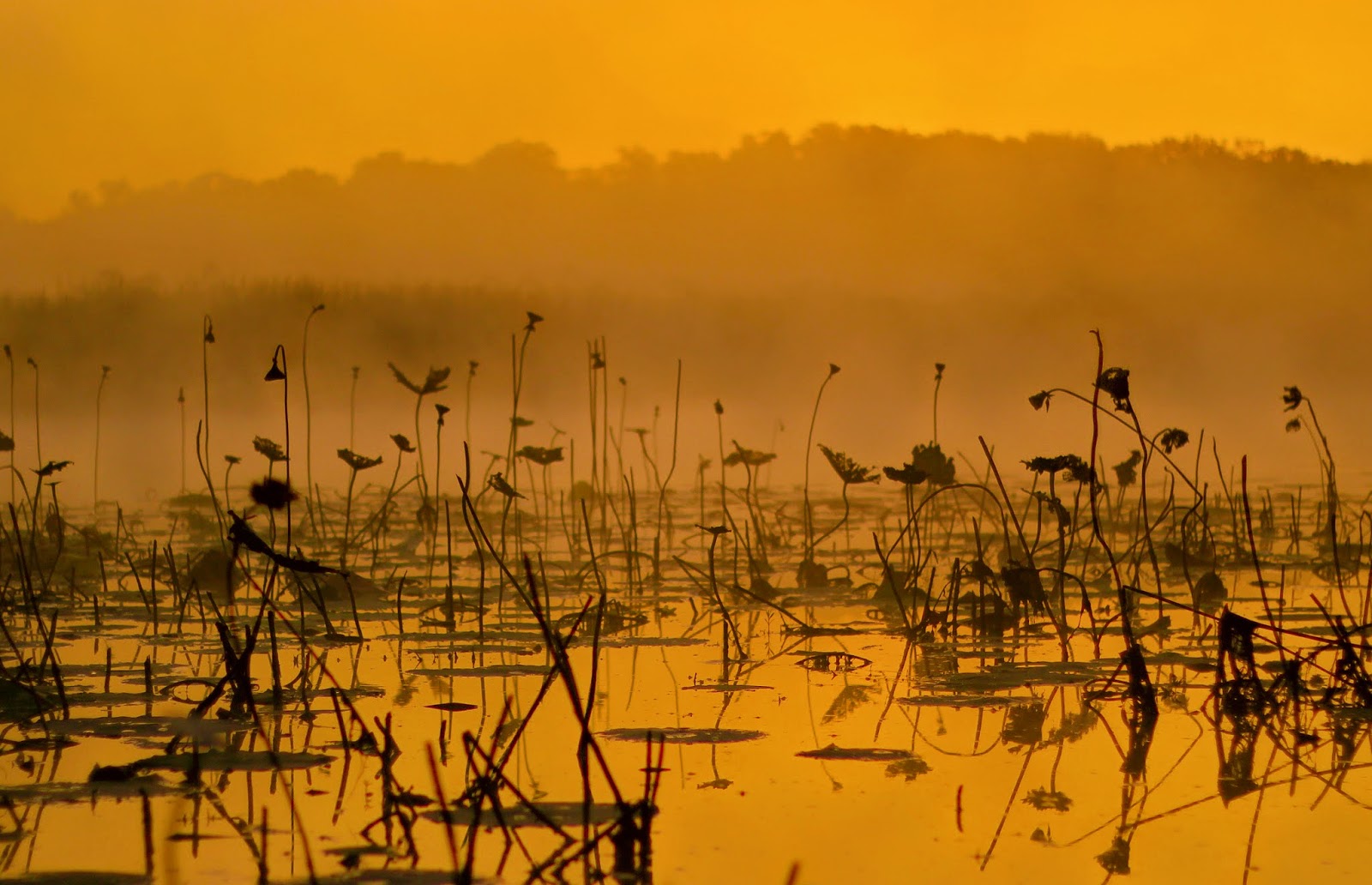 It is here, far from prying eyes and the chainsaw’s song where one can find the seldom seen birds that fly through North Texas on their way to the Texas Gulf Coast.

Many use the Trinity River as a highway of sorts, the fairly unbroken swath of greenbelt stretching from roughly Bridgeport to Trinity Bay. Redhead Ducks are one such species that migrate through this part of the state to the Gulf of Mexico in what is known as the Central Flyway.

Biologists on the Texas Gulf Coast estimate that a large percentage of the North American population of Redhead ducks overwinter on the coast. Of those it has been estimated that less than 4 percent of the female Redheads can exhibit a relatively obscure form of what appears to be leucism unique to this species.

In leucistic birds, affected plumage lacks the color pigment called melanin due to the cells responsible for melanin production being absent. This results in a white feathers, unless the normal plumage color also comprises carotenoids (white/yellow coloration), which remain unaffected by the condition. Although leucism is inherited, the extent and positioning of the white coloration can vary between adults and their young, and can also skip generations if leucistic genes are recessive.

This condition is quite different from albinism and in regards to Redhead ducks and might be more of a rare feather plumage of the species rather than true leucism. Confused? You should be!

Very little is known about how some Redhead hens develop their white feathers. Other species of pochards which are diving ducks like Scaups, Ring Necks and Canvasbacks do not exhibit the same coloration differences. The rarity of such a duck yields very few photographs on the internet. 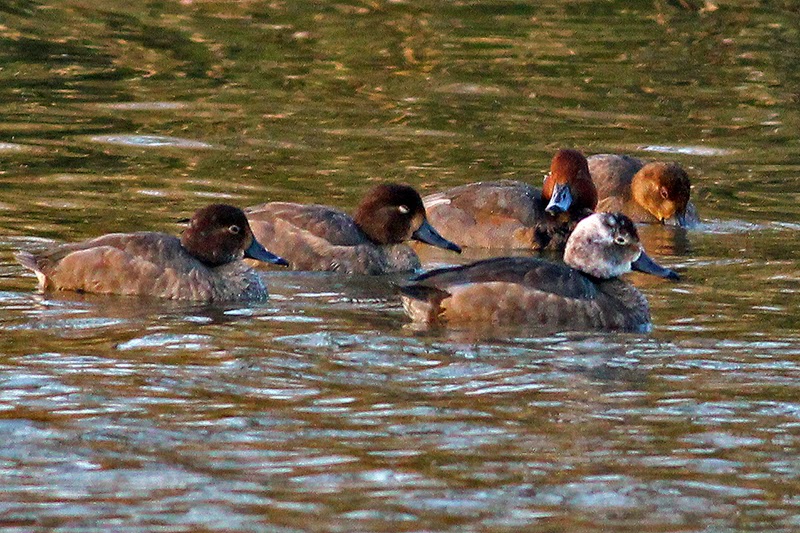 The Redhead Aythya americana is a diving duck and a member of the pochard family of ducks. It searches for aquatic vegetation in muddy shallow areas of water. Inhabiting in shallow freshwater lakes, ponds, marshlands and coastal waters in the summer months in Canada it migrates to the Gulf Coast for winter months. In both locations it may eat mollusks, aquatic insects, and small fish.

The typical Redhead is 18-21 inches in length with a wingspan of 29-31 inches. It has a rounded head and a grayish-blue bill with a black tip. It has grayish-blue legs and feet and a gray stripe on its wings. The male has a copper brick colored head, a gray back, and a black breast and rump. The female is a grayish-brown on her back, sides, and wings. She has a lighter grayish-brown belly. 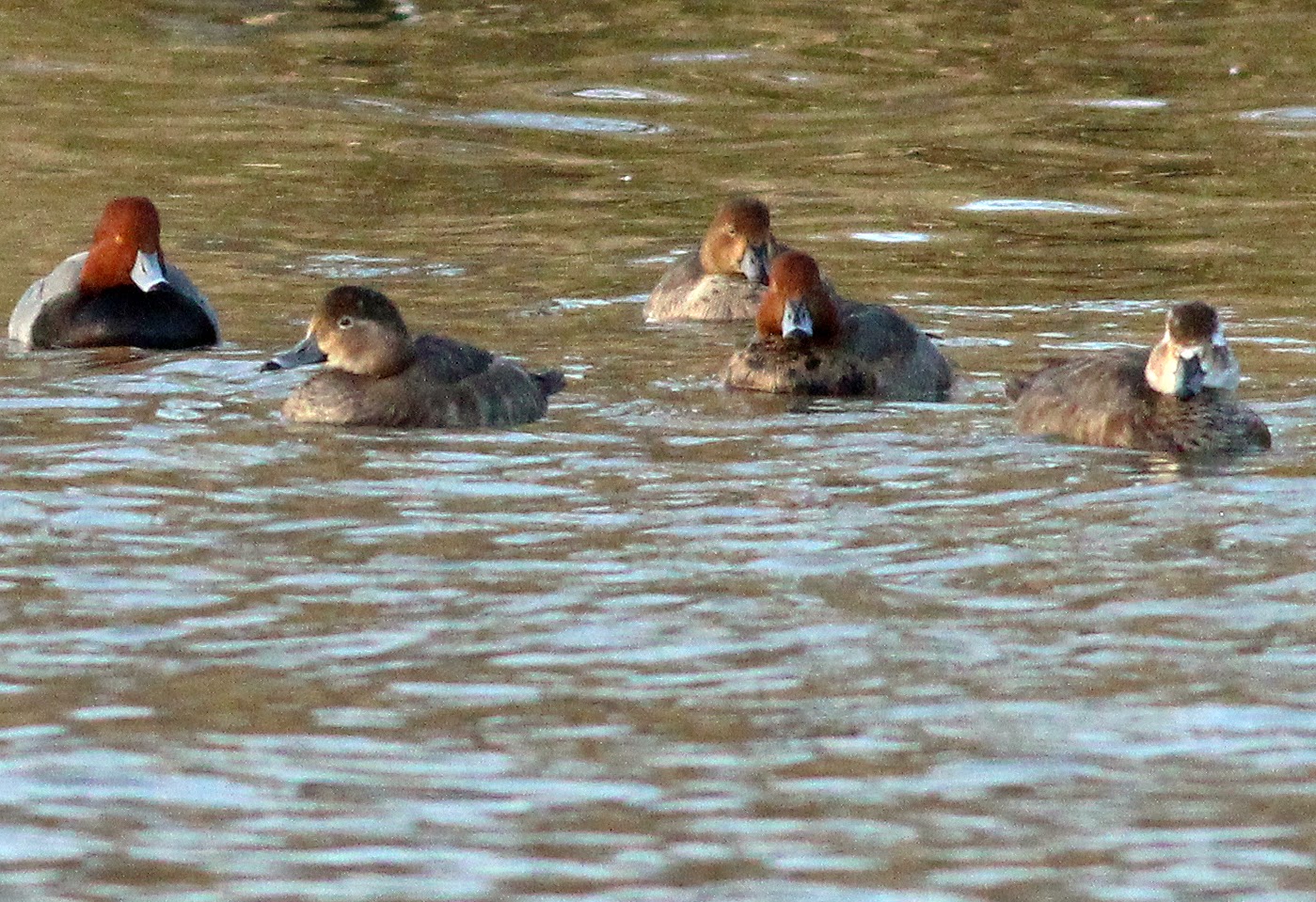 Like most diving ducks, the redhead’s legs are set back on its body to help it swim and dive. It is awkward on land, and it has to run across the water to take of in flight. The male has a cat like meow-like call, and the female makes a squawking sound.

The rare sight of such a colored bird like a white headed Redhead is a cherished opportunity to highlight the need for true wetland preservation in Dallas County. The diversity of Great Trinity Forest animal and plant life depends on these prairie pocket hole ponds for their habitat. Being drained and repurposed for development at an alarming rate reduces the quality of the river as a whole.

Autumn Fall Color at Scyene Overlook And Beyond