Autumn Fall Color at Scyene Overlook And Beyond

The prolonged drought in Texas coupled with early frosts have brought a different kaleidoscope of color to the Great Trinity Forest’s Piedmont Ridge in 2014. The orange and red hues of the oaks on the thin soils commanding the view of the ancient White Rock Creek Valley are as spectacular as ever. The pecans, walnut and ash trees wilted quite quick in retreat due to early cold. Their traditional mustard yellow hued leaves are absent this year replaced by earth toned browns.

2014 was a rather short and dry growing year in the Great Trinity Forest. A very cold and bitter winter of 2013-2014 stretched into April with cooler and drier than normal temperatures. The result was a late spring with a muted wildflower bloom.

Further into the season, the lack of rains manifested itself in fewer fruit and nuts on area trees seen in the pecan and oaks that dominate the landscape.

As recently as 4-5 years ago there was a spiderweb of trails in the park system here that allowed first time users to easily navigate to points of interest and overlooks. Those trails are quite overgrown or blocked by dead fall now. The epic October 2, 2014 storm that struck Dallas also hit the northern Great Trinity Forest head-on. Many trees on the terraces weakened in the drought fell, shed branches and limbs in the wind.

Getting to this area is quite easy. Bounded on the north by historic Scyene Road and the south by Lake June one can get here from US 175 or I-30 quickly from Downtown Dallas.

2300 Jim Miller Road Dallas Texas
Best parking will be found near the address above or at the parking lot for the Grover Keeton Golf Course across the railroad tracks.

When maintained the Lower White Rock Creek Trails are comprised of a roughly 3-4 mile(depending on route) soft surface trail network spanning three different City of Dallas Parks. JJ Beeman/Scyene Overlook on Scyene Road, Grover Keeton Park which includes Piedmont Ridge Trail and Devon Anderson Park south of Bruton Road. Many of those trails are hampered by blowdowns and overgrowth this year. First time visitors might not be able to find the unmarked entrances.

The climb to the high points and overlooks of the hike are still visible. Start in the Oak Creek drainage near Grover Keeton. One can start hiking this section of trail either from the right field foul line of the softball field at Gateway Park or on the west side of the DART Tracks at the Grover Keeton Golf Course where a Gateway Trailhead marker exists on the far north end of the parking lot. The Grover Keeton Trailhead in the golf course parking lot is overgrown but the sign still stands. 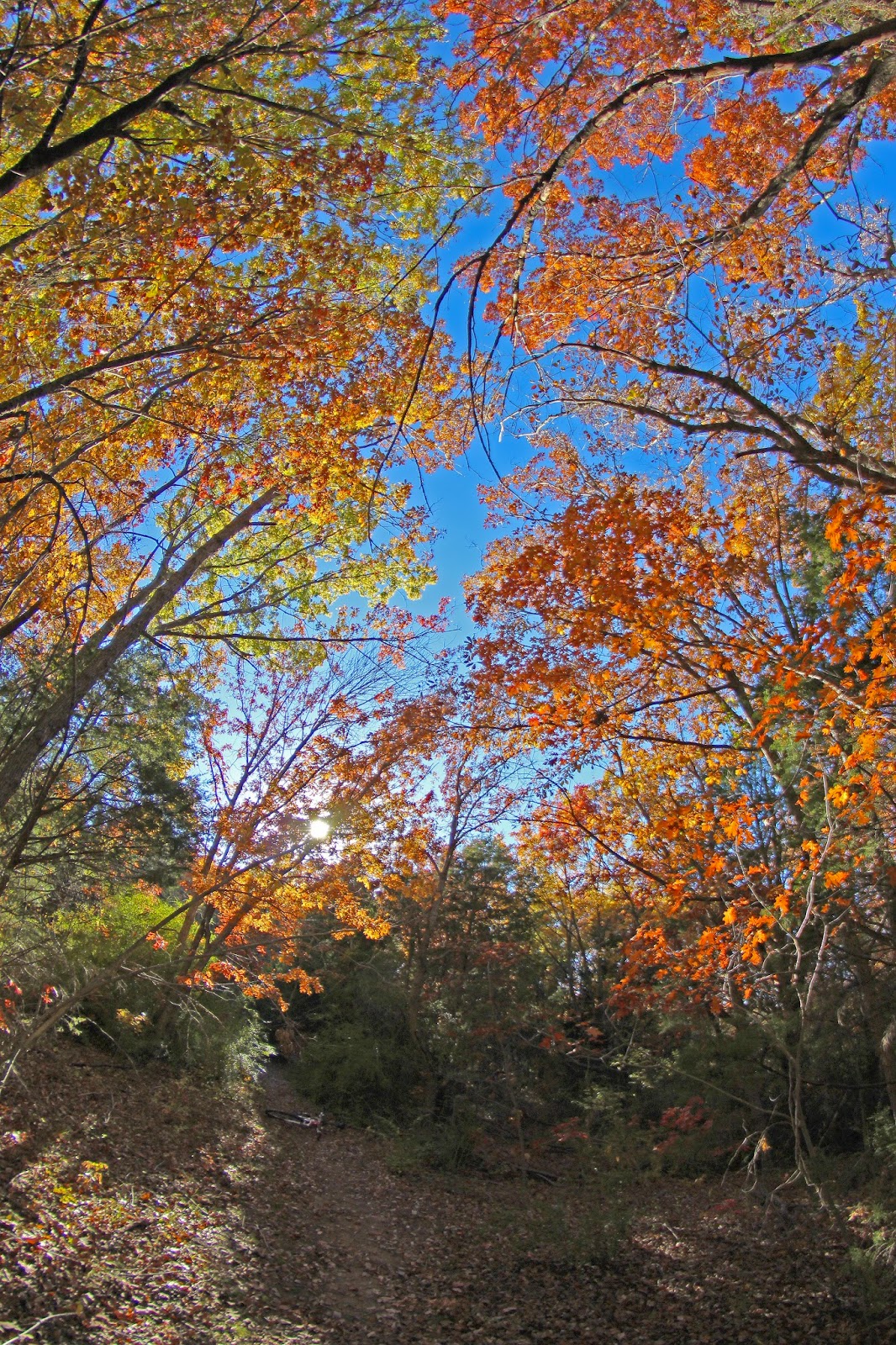 The trails are comprised of a random mix of paths with no clearly defined start or finish. Over the last couple years, trail maintenance has fallen off and as a result some of the sections might be a puzzling adventure to find. The trails are all still there just more faint in appearance for a novice visitor.

Oak Creek has a great influence beyond the escarpment here. It becomes a fundamental component to the lifeblood of the Great Trinity Forest by providing slow moving water that funnels into an area around Roosevelt Heights. The area is core habitat for beavers and otters who have large populations down there. Oak Creek also picks up the outflow of the natural spring Big Spring before joining White Rock Creek in Rochester Park.

The trail up to Scyene Overlook is a confused jumble of poorly built old trails and equally poorly built newer ones that were designed to mitigate past problems. Having been here dozens of times, even I still get turned around trying to take the right path up. 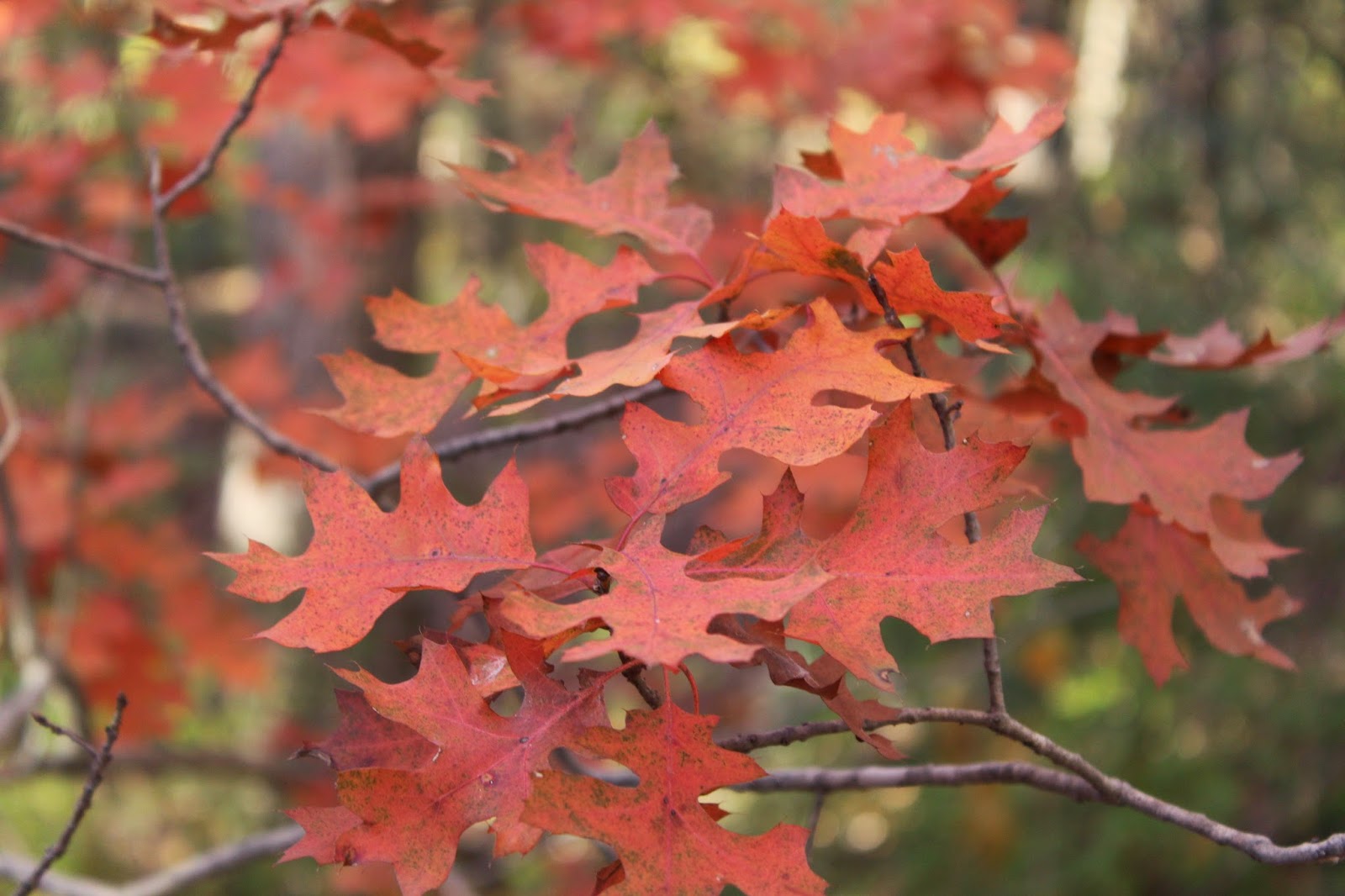 Best advice is head northwest from Jim Miller @ Grover Keeton Golf Course and head towards the higher points seen in the distance. Just keep heading towards Scyene Road and follow the more worn trails. You’ll hit some dead-ends and loops that double back. Chalk it up as fun.

Scyene Overlook is named for an old frontier settlement two miles east of the overlook named Scyene. The town center was at the present day intersection of Scyene and St Augustine roads . The name “Scyene” is a play on the ancient Egyptian town named Scyene an old frontier outpost on the east bank of the Nile. Around 500 BC, the same time the Book of Ezekiel references the ancient Egyptian town of Syene (Aswan), some ancient Native American left behind a Gary dart point(arrowhead) here on the bluff.

The knot of trails all approach Scyene Overlook from the southwest. Encountering fence posts, pickets and erosion control in a few spots the trail winds around to the northwest and eventually the north side of Scyene Overlook.

A thin veneer of soil noted as the Eddy Brackett sits atop the high ground in this area. This soil was once common in a belt that stretched through Pleasant Grove, East Dallas and Lake Highlands. Paved and developed long ago very few places still exist to find these plants. 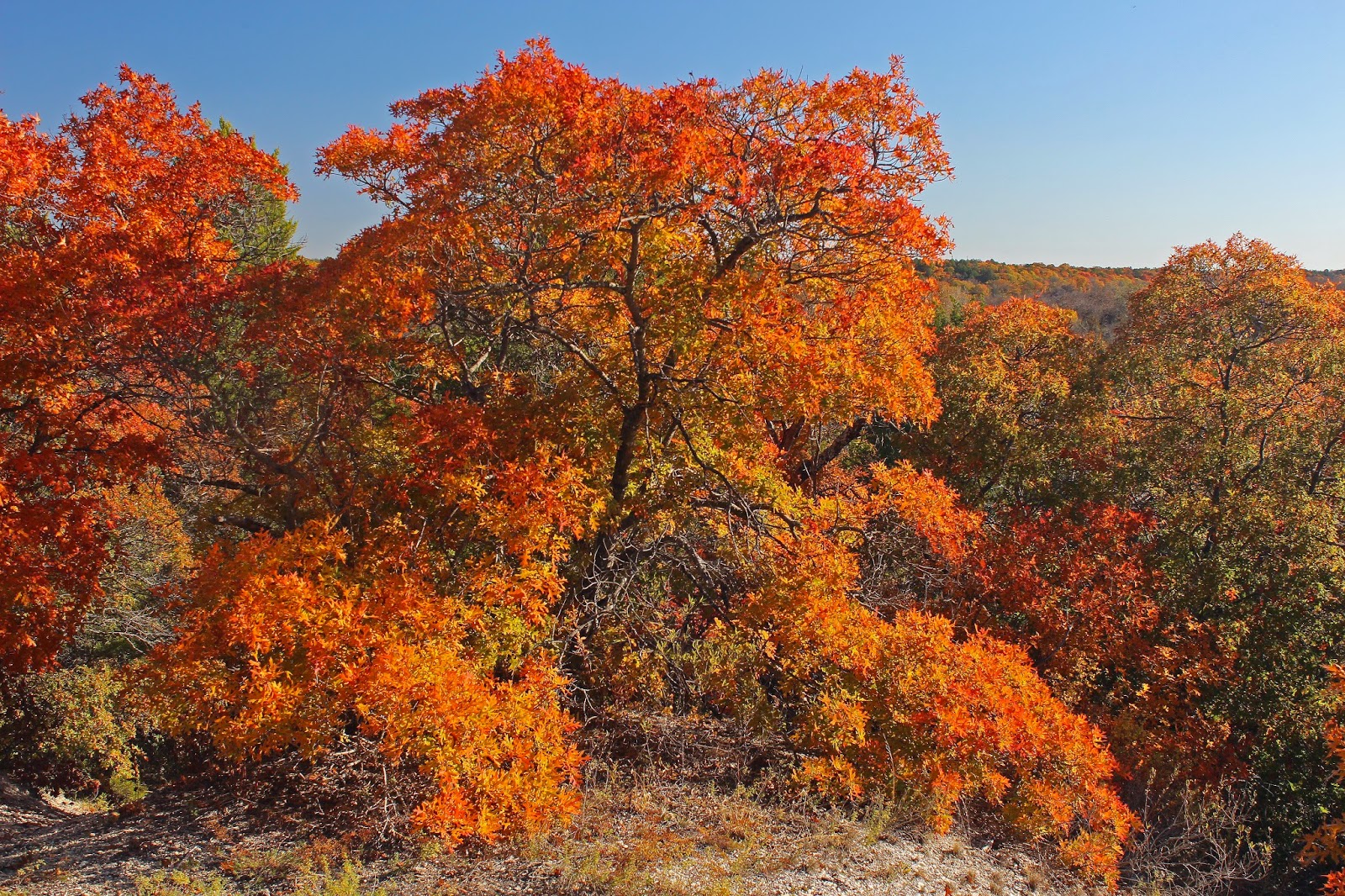 The focal point this time of year is of course the Red Oaks along the escarpment. Along the White Rock Escarpment through Dallas to San Antonio there are hybrids of Texas Red Oak Quercus buckleyi (Q. texana) and Shumard Red Oak, Q. shumardii. Smaller in size than most Red Oaks we Texans know so well, these trees thrive in alkaline soils and are very drought tolerant. 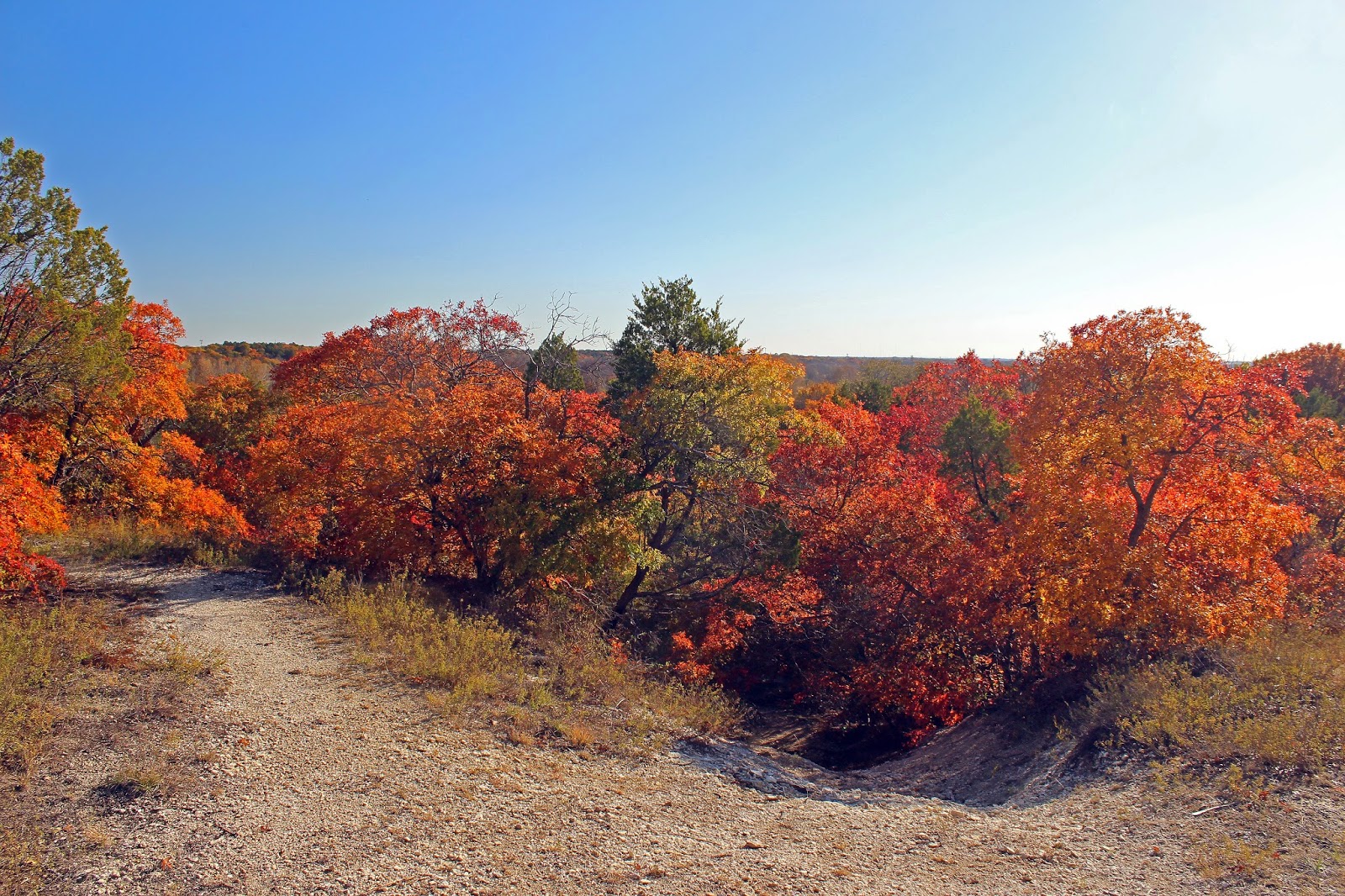 There is a close relationship between Texas Red Oak and Shumard Oak. This has caused many botanical classification problems. The two trees may be listed as two separate species in some manuals, while some list Texas Red Oak as a variety of Shumard Oak. 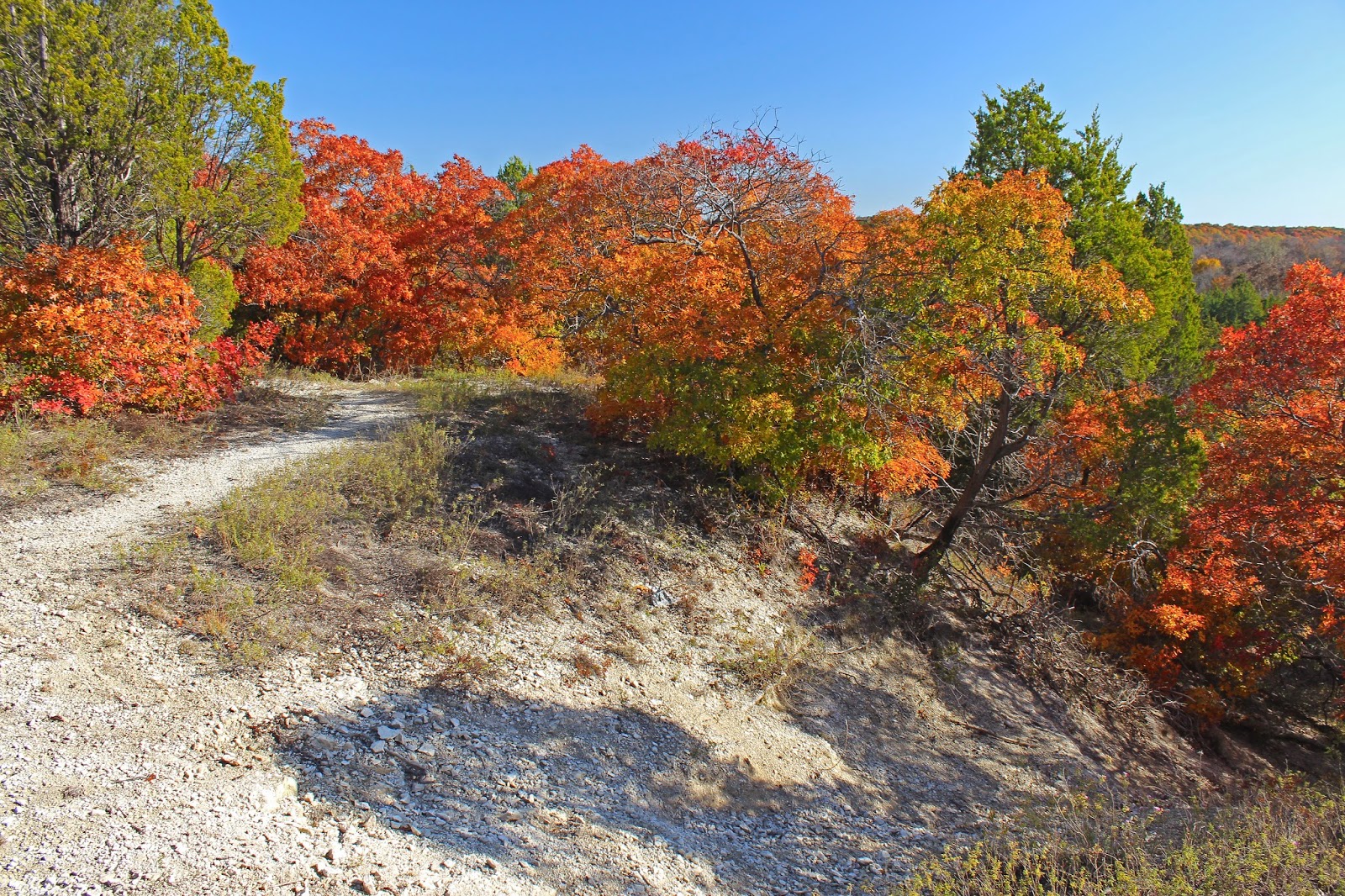 The colors that the trees exhibit in the Texas fall are a sight to behold. Using a polarizing filter in some of these photos takes the white shine of the leaves off and brings to true color of the leaves out. The intermittent sun and cloud cover changed the coloration of the trees from one minute to the next. 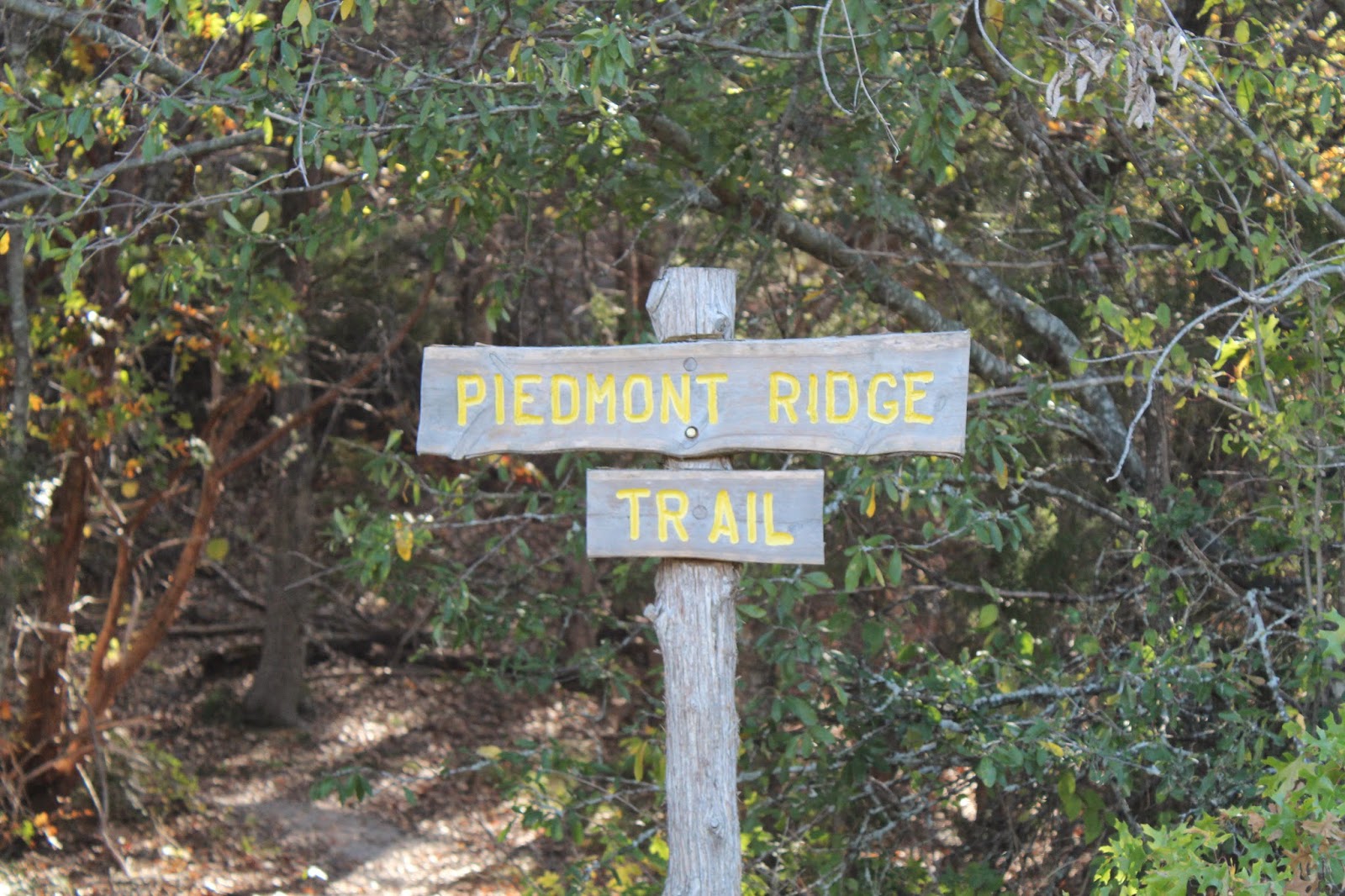 Piedmont Ridge is slightly higher than Scyene Overlook. The long ago built trail along the topographical high is reached by navigating back across the Scyene Overlook escarpment across the driveway entrance of Grover Keeton. Heading south with Jim Miller on the left and the DART tracks to the right, one will find a trailhead kiosk and trail entrance.

This is an easy section of trail to hike since much of the distance is atop the ridge. Some short and steep switchbacks climb quickly onto a level topped ridge with a set of cedar hewn benches roughly 2/3’rds of the way towards Bruton Road.

Beyond Bruton Road is yet another stretch of trail that has all but gone to seed. A lack of use, poor design and no maintenance has led to a trail that is treacherous in places and difficult to navigate if one has never been there before. The better trailhead to access this area is the southern anchor of the once existing trail.

Southern Trailhead at Devon Anderson
1700 Eastcliff Dallas Texas
This entrance is on the southern end of the trails. The City of Dallas actually wrongly installed the city park sign for Devon Anderson Park here, the sign reads “Devon Cr”, assuming Devon Circle as the name of the street. Park at the wrongly installed sign(hey I called them about it and they never fixed it) and head back into the woods where a playground area once stood due west. Pick up the trail and head north.

The southern entrance is the best spot to start if one has never been here before. The issue parking other places to the north is that one will not be able to pick up the trail south of Bruton Road. Better to head from south to north, noting the southern Bruton entrance.

Up until recently at the first trail junction there were a couple trail signs noting the Comanche Storytelling Place to the south 1/10th of a mile and a scenic overlook some 1/4 mile to the north.

The Comanche Storytelling place serves as a prominent anchor to the southern end of the trails here. Beyond are steep root strewn gullies that lead nowhere to the south and west. The Comanche Story Telling Place at Devon Anderson Park has been identified by the Comanche Nation as a sacred holy ground. The Comanche nation tells us that the natural limestone shaped amphitheater was believed to have been used by Native Americans in the area prior to European settlement.

To the north the trail built here running towards Bruton has become a problematic source of accelerated erosion. Built substandard in areas the path vectors water in ways that are detrimental to the slopes and benchcuts upon which it was built. The result is a rugged piece of trail not by design but by lack of design. The blowdowns and trees across the trail are numerous from the October storm. As a result I would not recommend it for hiking.