The Texas Buckeye Tree Aesculus glabra var. arguta makes for one of the earliest and best shows of color in the state. The Great Trinity Forest holds prime examples of these species many in a special grove inside Rochester Park. 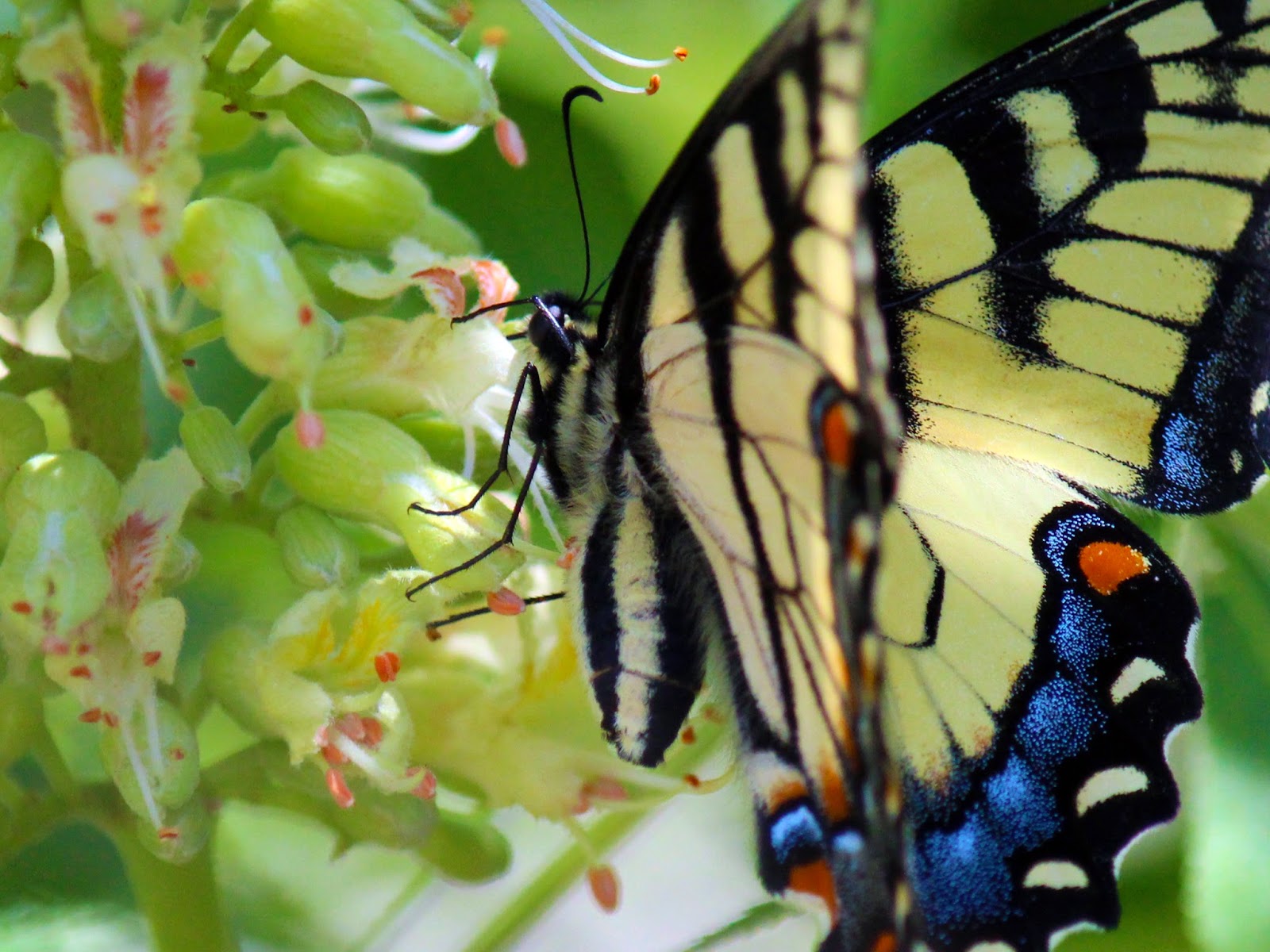 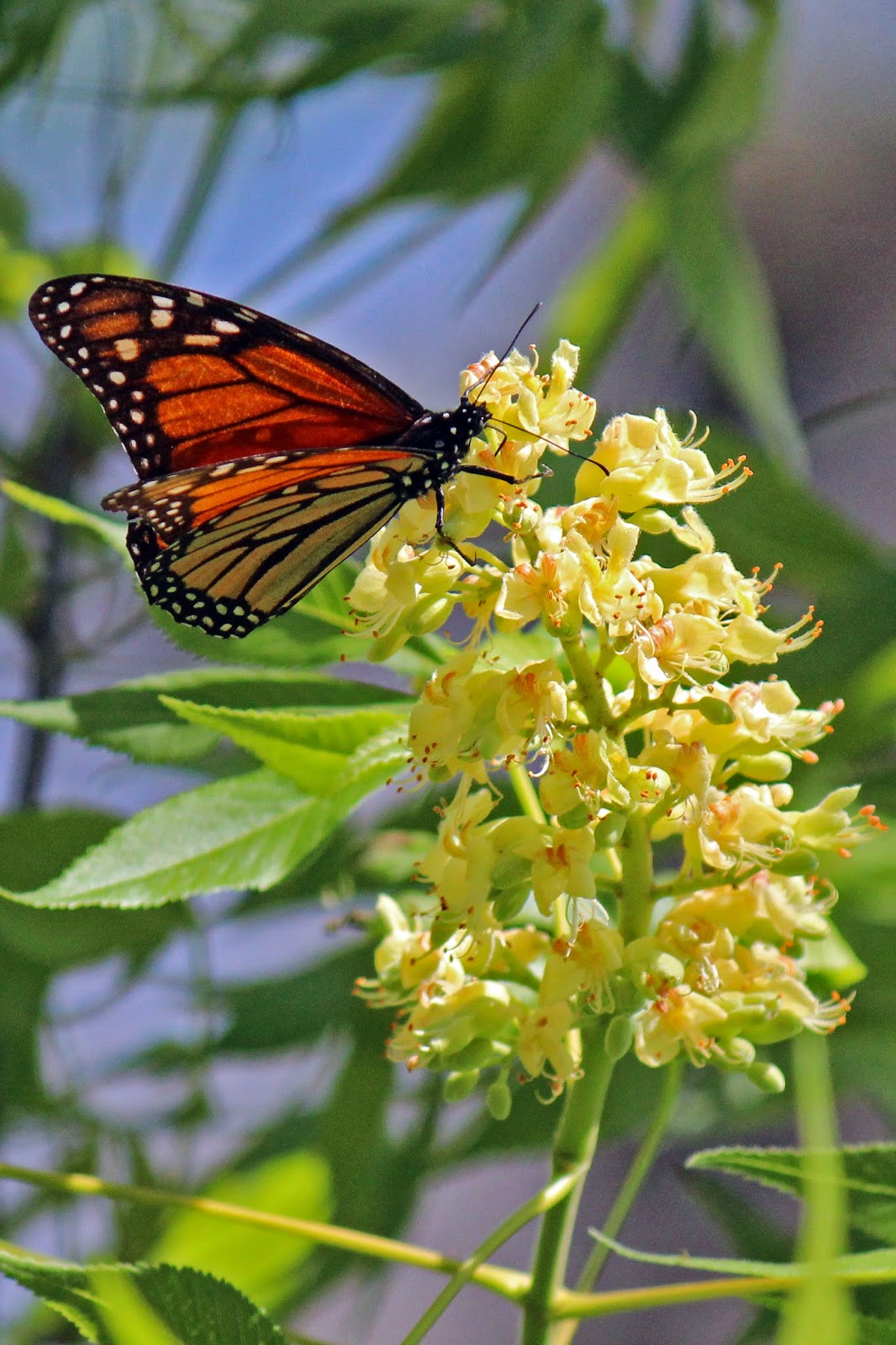 Coinciding with the annual bloom of these trees is a free walking tour hosted by Master Naturalist Jim Flood. His website http://www.texasbuckeyetrail.org/ has details on guided hikes the second and third weekends of March 2014. Jim Flood’s 2014 Buckeye Hike Schedule.

These hikes in particular are really the only formal scheduled guided hikes inside the Great Trinity Forest that I’m aware of and only occur once a year. For those interested in learning more about the Trinity River, Great Trinity Forest and background on the area, this is the hike to take. 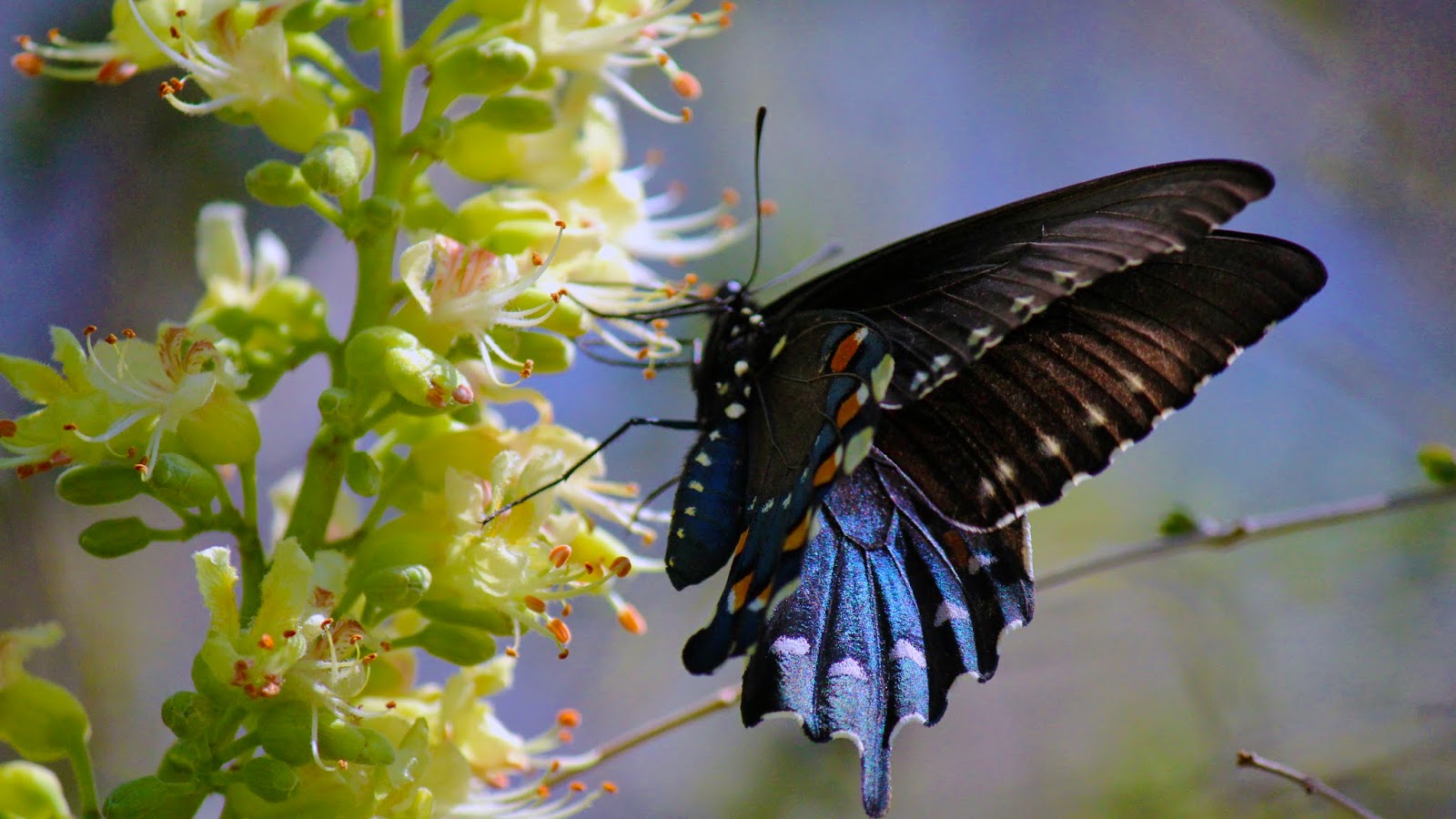 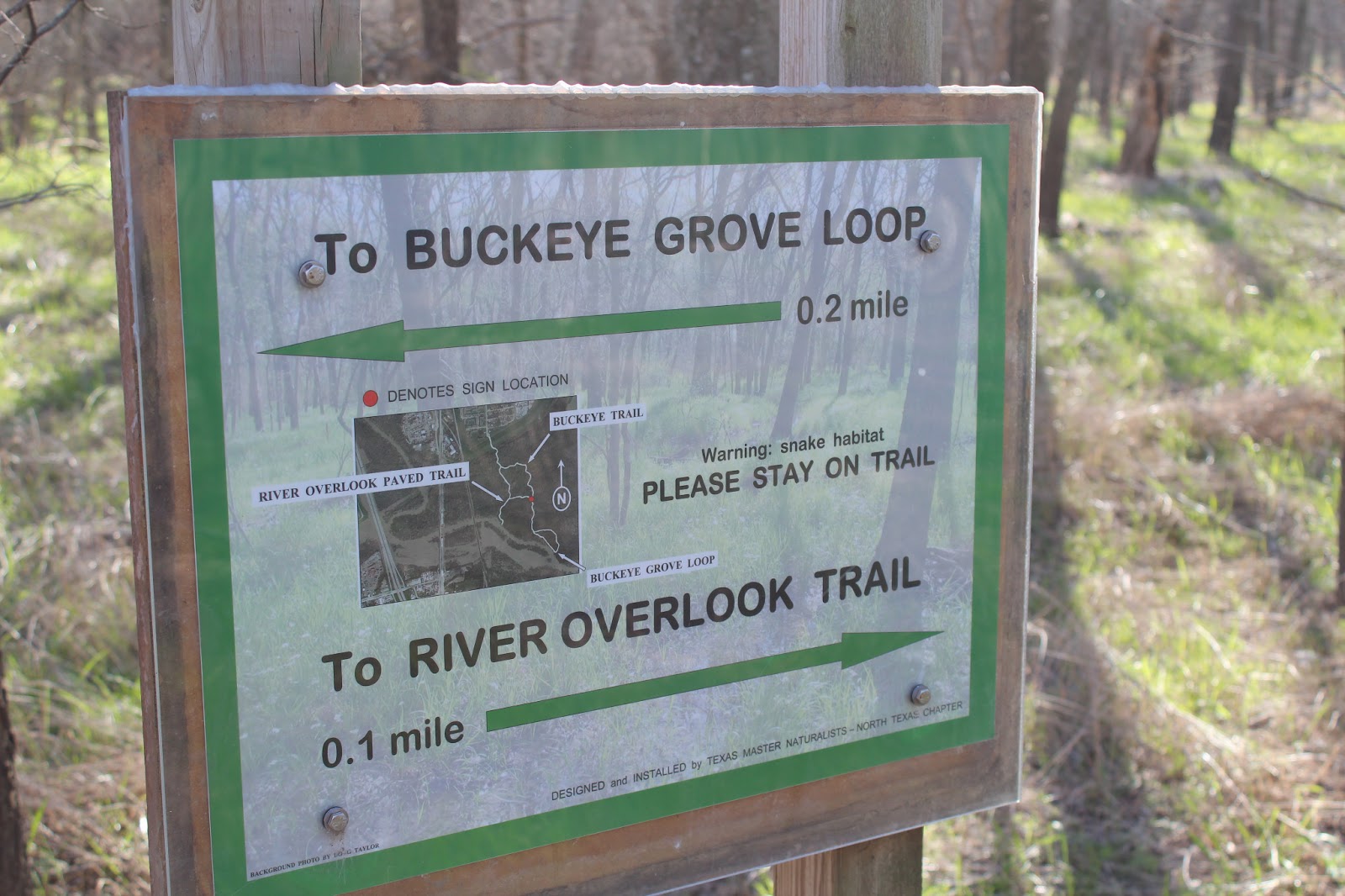 Trail Beta: Bexar Street dead ends at the Rochester Park Levee, a small pavilion and trailhead kiosk are there. Cross a small ditch, up and over the levee, a decomposed granite trail surface leads to a concrete ADA compliant trail beyond. On the concrete trail, there are a series of round plaza areas with sandstone rock benches. Plexiglass/wood signs note the trail intersection to the natural paved path to the Buckeye Trail.

The distance from the parking area to the Buckeye Grove is about 1/2 a mile one-way and makes for a 1 mile round trip. Trail is easy to walk, flat and other than a couple small tree trunks on the trail is easy to walk. What is called an 8 to 80 trail, anyone 8 years to 80 years could walk it alone.

From the Texas Native Plants Database: Texas Buckeye has palmately compound leaves with seven to nine (sometimes eleven) leaflets, vs. the five leaflets of red buckeye. The flowers are creamy white to light yellow, appearing in terminal clusters after the leaves appear. The fruit, a leathery capsule with blunt spines, has one to three large shiny seeds. The seeds are known to be poisonous, and it is possible that all parts of the plant are as well. 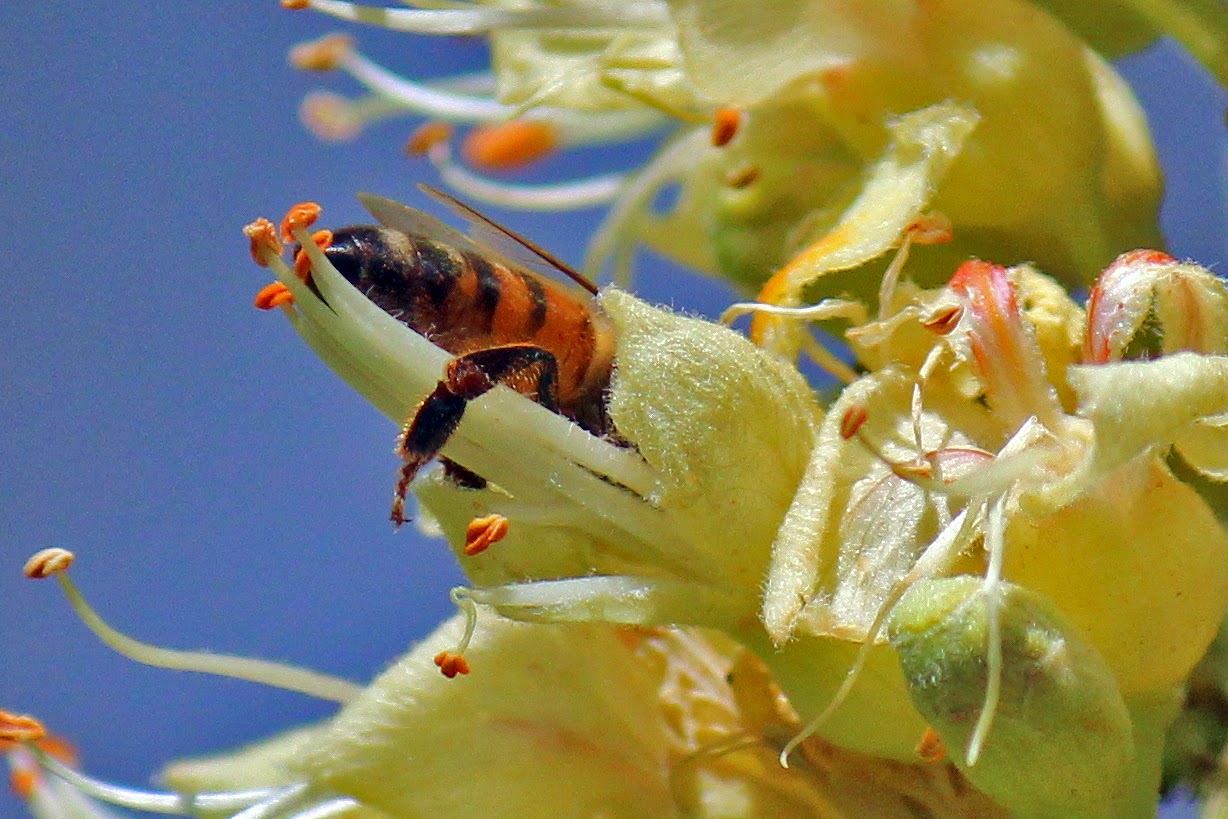 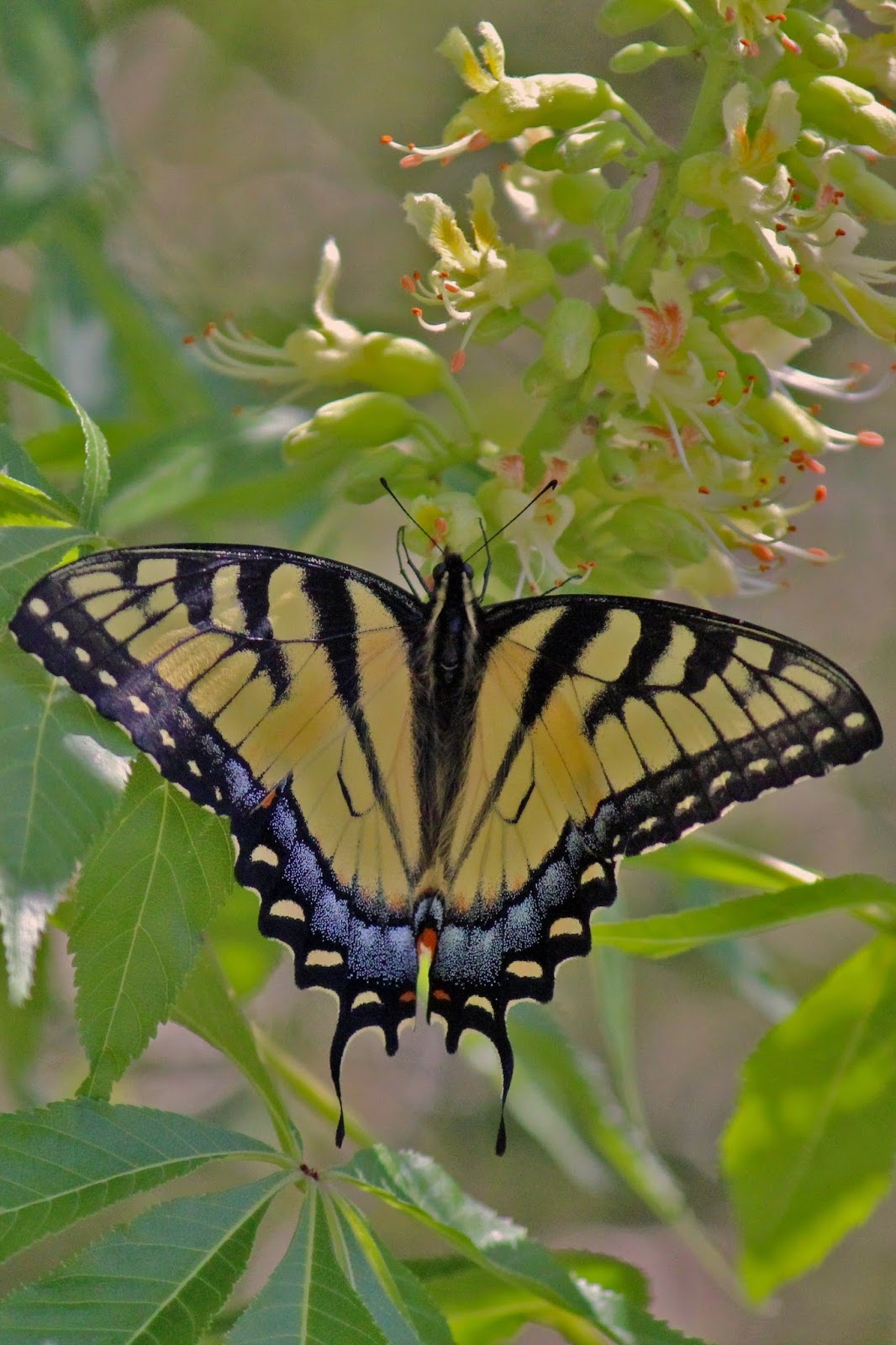 It tends to prematurely drop leaves in hot, drought situations, due to leaf scorch and fungal diseases. Usually a small shrub or small tree, Texas buckeye reaches its largest size (more than 40 feet) in the hard limestone of the central Edwards Plateau, although it also occurs in the northern Blacklands, Cross Timbers and Prairies, Pineywoods, and Post Oak Savannah.

The botanical name for the Buckeye is Aesculus which was taken by the Swedish botanist, Carl von Linne from “Aesculapius,” the name of the mythological Greek god of medicine. 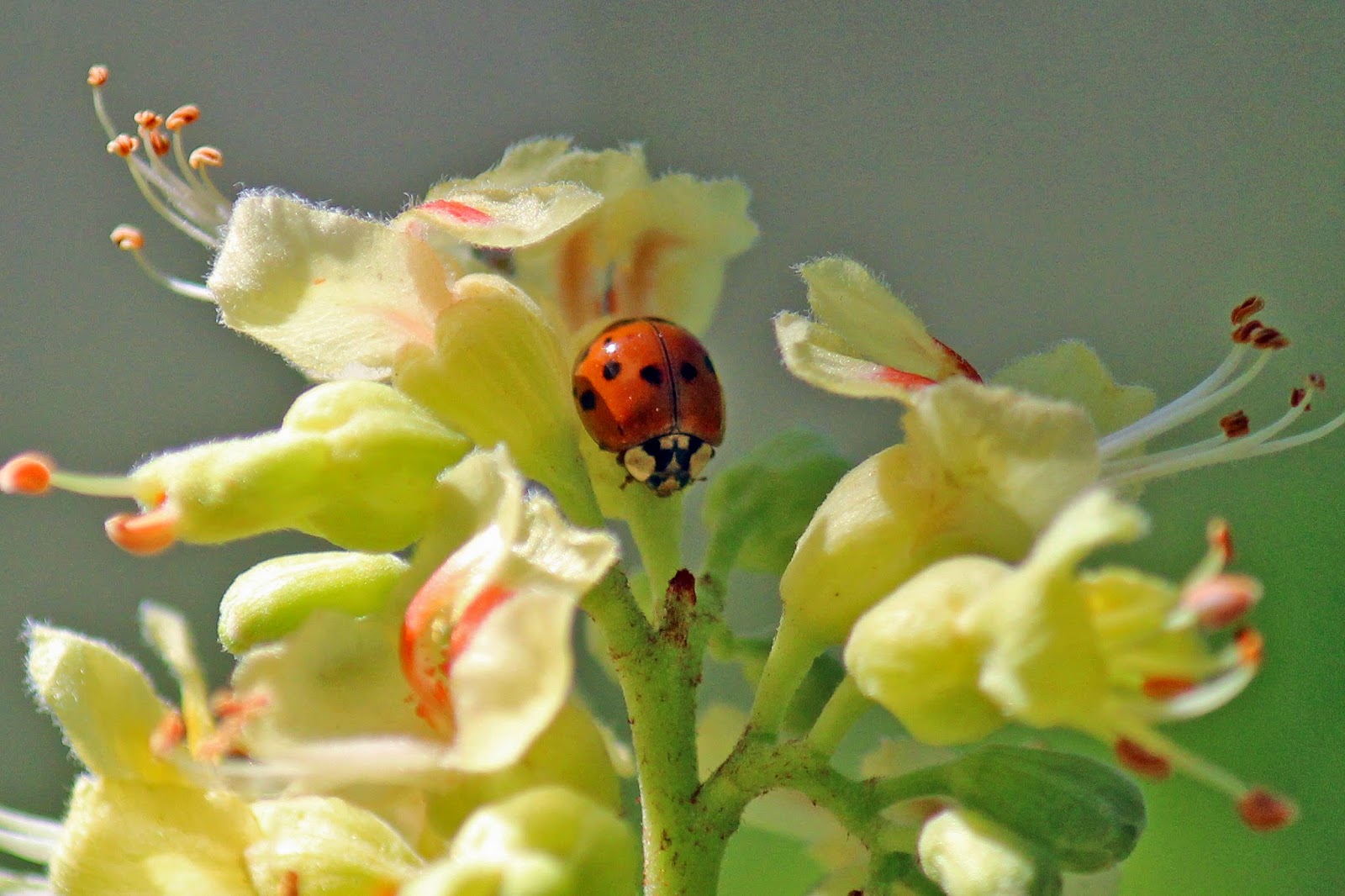 The seed nut of a Texas Buckeye is glossy and chestnut-brown in color. It is velvety smooth to the touch with a lighter circular “eye.” It is contained in a spiny, two-inch hull and is set in five palmately compound, five inch long, deciduous leaflets. The leaf formation has been described as “praying hands” by poet Albrecht Duerer. The seeds and bark are slightly poisonous and bitter tasting. 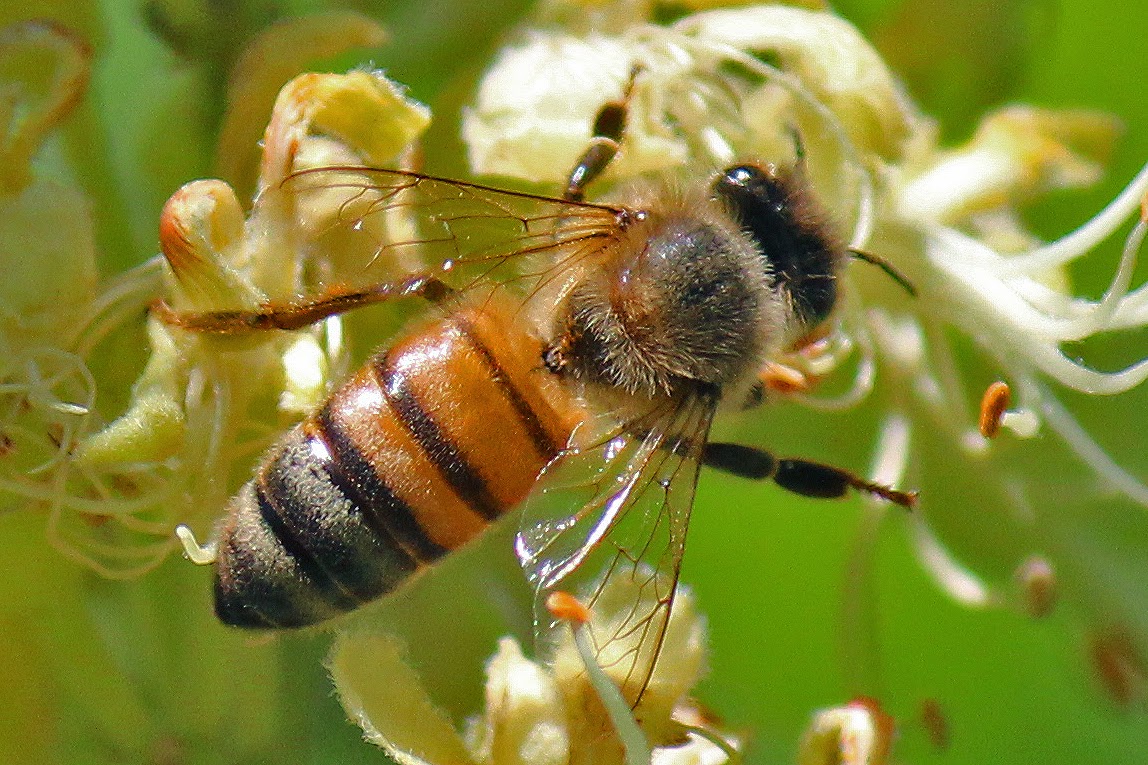 The insects love the pollen and nectar of the Texas Buckeyes here in the Great Trinity Forest. One of the earliest flowering plants, the feeding frenzy on sunny days is a sight worth the walk.

If one comes around sunrise or sunset the sighting or at least the sounds of the mating Barred Owls can be heard in the vicinity.

The Barred Owl Strix varia is a non-migratory year round resident of Texas. Often called the Hoot Owl by many or misidentified as a Barn Owl, the Barred Owl is named for dark vertical stripes/bars contrasting on a white chest. At close distance, another signature marking are the dark brown eyes.

The Barred Owl is the only North American owl without a yellowish eye.  Most active after sunset, the Barred Owl is considered nocturnal but can also be seen and heard during the day during mating season. The birds feed on a variety of small animals including mice, rats and squirrels.  Distributed widely in the Eastern half of Texas they prefer large mature woodlands, marshes and stands of old growth trees.

Birds other than raptors frequent this area where the attraction is shelter, cover and proximity to food. A keen eye can often find bird nests in the most unlikely of places like the nest above, which is about the size and construction for that of a Robin.

Back History On The Land

Much of the land where Rochester Park/William Blair Park now sits was once a dairy farm.  Joseph Metzger, a Swiss immigrant and the founder of Metzger’s Dairy, crossed into Texas holding his only possessions in a pack above his head while the Red River was at flood stage in 1875.

Metzger proceeded to Dallas where he tried farming in the community of New Hope (Mesquite/Sunnyvale) in Dallas County. Not experiencing much success in that endeavor, he later worked for Chris Moser, one of the Southwest’s first dairymen. In 1889 her rented a farm in the vicinity of North Carroll, Haskell and Ross Avenues where he began his own dairy with the purchase of 40 cows and a horse drawn milk wagon. 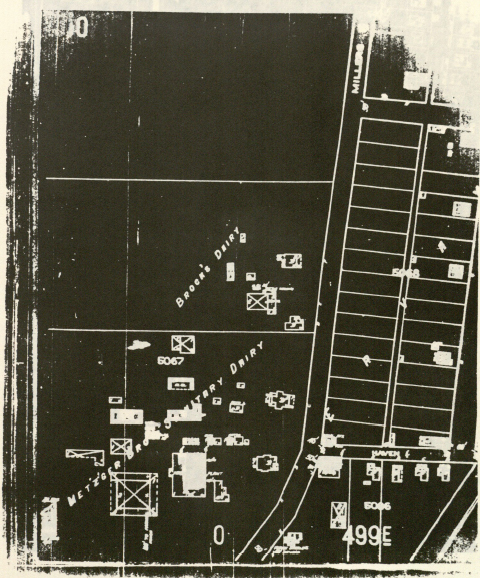 In 1893 Metzger began purchasing land within the old John M Crockett survey for the purposes of relocating his dairy. At that time 64 acres were purchased less 1.8 acres which were to be used as the county road known as Miller’s Ferry Road. Thus began a succession of street names(later Holmes Street and Hutchins Road) for the street now known as Lamar Street. A deed dated February 28, 1893 and filed the same day describes the land as extending from west of the railroad to the river. Metzger continued to acquire parcels of land until 1904. After all purchases were made, the farm which became the home of Metzger’s Dairy contained 159.6 acres. 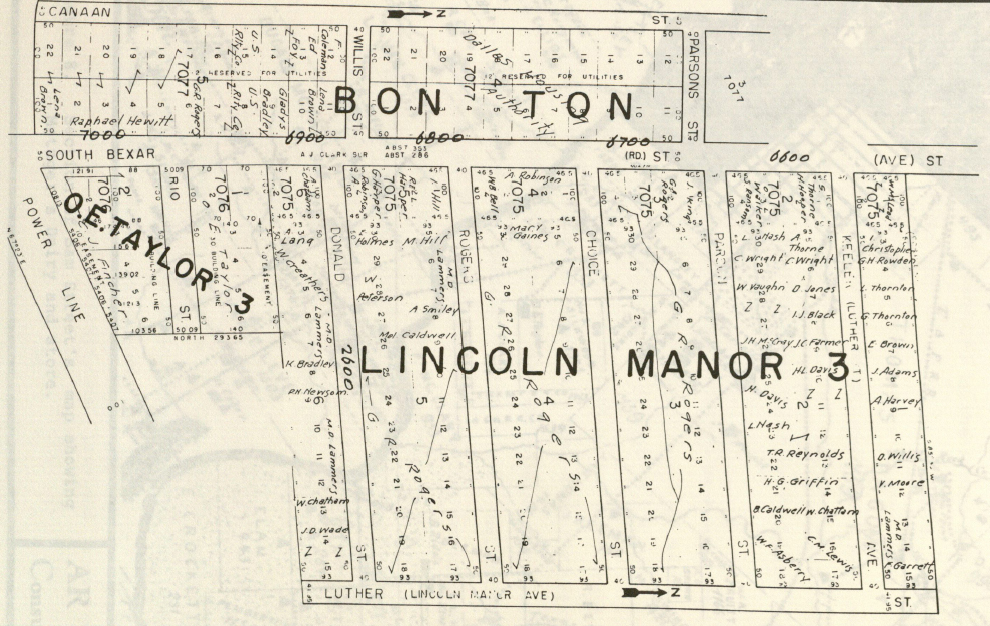 Metzger’s dairy flourished and by 1909 was purchased by Joseph Metzger’s sons Carl and David. In 1922 it was listed in the Dallas Directory as Metzger Brothers Sanitary Jersey Dairy. At the time the dairy was considered the largest and most modern in Texas. The first Dallas dairy to use glass bottles. Following World War II, the rapid expansion of Dallas led to an expansion of the facilities. The Metzger family involvement ended in 1984 with the sale of Metzger Dairy of Dallas to Borden.  This area is more recently noted for the large cache of Indian artifacts and Indian burials on the site. Seven sets of Indian remains have been found here. There are an estimated 34,000 Indian artifacts still at the site spanning thousands of years of human occupation. It has been nominated by a team of professional archeologists for inclusion on the National Register of Historic Places.

Some interesting things to see beyond the Buckeye Trail. Hiking through heavy brush and upstream one will find themselves on a rather remarkable bend in the river known as Miller’s Bend. Site of the old Miller’s Ferry. Far removed from the city yet still bracketed by freeways in the near distance resides one of the largest trees in Dallas, the Miller’s Bend Bur Oak.

Bur Oaks, especially those that grow to soaring heights love water. On the Trinity River in Dallas, large Bur Oaks spared the ravages of logging can be found in old meanders, streambeds and even next to a freshwater spring like Big Spring. In the quest to learn more about Big Spring and the environs around it, science has taken us abroad to look at other similar springs, rock outcrops and in this case another huge Bur Oak.

12′ 7″ circumference on the tree with a 48′ crown spread to the northwest and 57′ to the ESE. Pretty big tree and uniform in size and appearance with an estimate of 65-70 feet in height. That all translates into a roughly 151″ circumference and roughly 105′ crown spread.

For reference and comparison the Texas A&M Forest Registry lists the champion Texas Bur Oak at 218 in. circumference or 5.78 ft. diameter, 81 ft. in height, with 105 ft. crown spread from Tarrant county recorded May of 2006. This tree is in Benbrook I believe.

The the DFW Big Tree registry notes the largest Bur Oak recorded as on the Trinity River is 223″ in. circumference at 69 ft. in height with a crown spread of 84 ft.

The Miller’s Bend Bur Oak stands among these and bests the largest trees to some extent. It’s a long lost cousin of the Big Spring Pemberton Bur Oak which resides just a mile or two away.

The Path Less Traveled and Trails That Cease To Exist 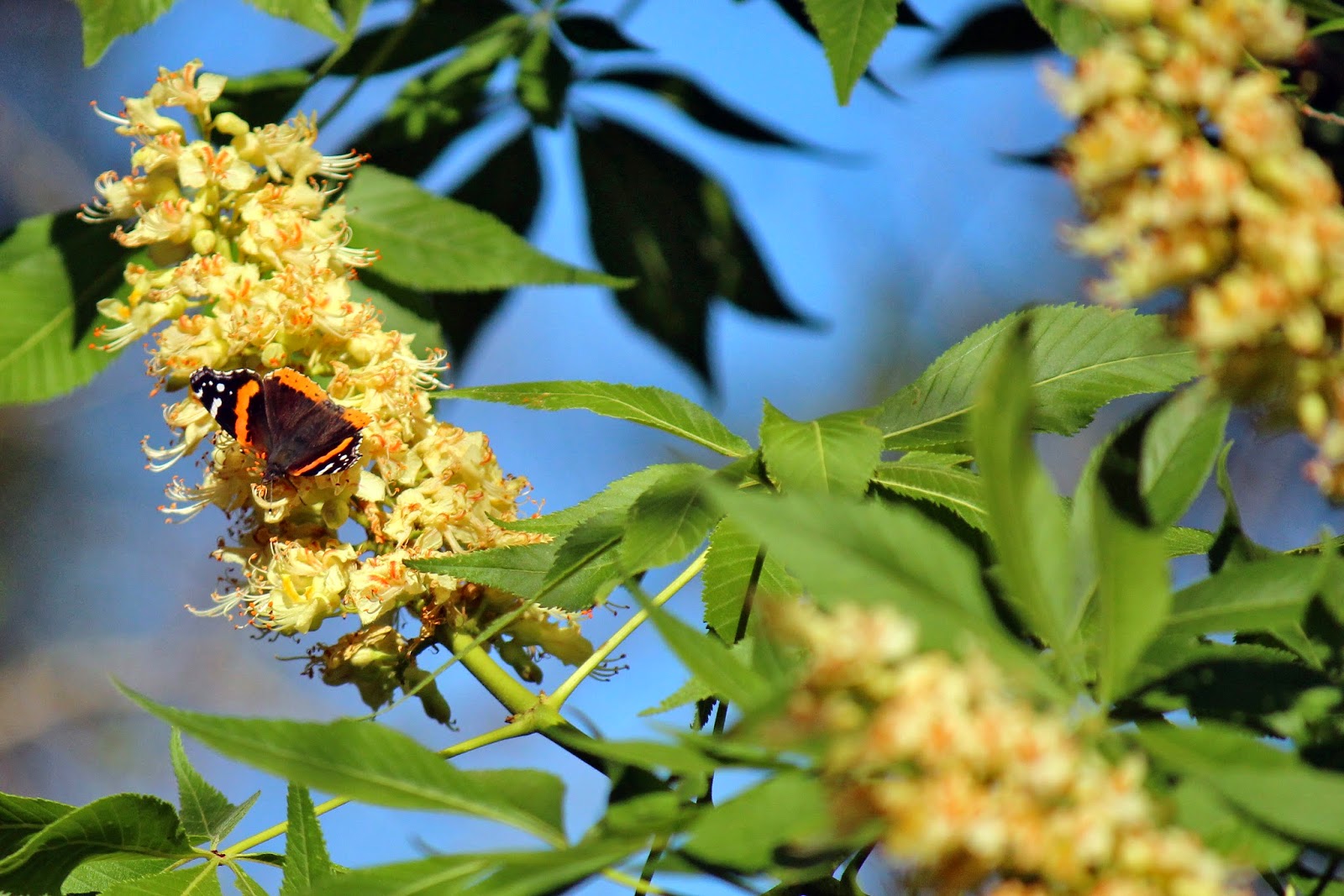 Other less formal undefined trails (not part of the Buckeye Trail tour) lead away from the Buckeye Trail. One in particular that loosely follows the Trinity River to the mouth of White Rock Creek. Below is the most complete map I have of trails in this area. Based on my own GPS data.

The trails that once followed the Trinity River and White Rock Creek to the confluence of the two water bodies, sadly, no longer exist. While the Buckeye Trail is maintained largely through the sole work of Jim Flood, his area of responsibility is the Buckeye Trail and maintenance of the Buckeye Grove.

Seen in the map above, the heavy red marked trail still exists and can be easily walked. The fainter trails in a maroon color no longer exist. Very little can even be seen of them even in winter. The trail tape has faded away or degraded enough that the path can easily be lost in a snap. It’s gone. If there were interest in ever reconstituting the trail it would need to be done from a square one, total rebuild. Other trails like Devon Anderson Park to the northeast a mile or so suffered a similar fate, built and quickly abandoned.

It’s still a nice walk through here. It just requires cross country hiking, a couple wrong turns and some head scratching to figure out. No harm, no foul for letting it go back to seed. It’s a teachable moment for the future, one that can be used as an example and learned from.

McCommas Bluff Preserve — Up Elam Creek Without A Paddle