It’s the last weekend of a Texas winter. In these parts we call it Windter. An extraordinary breezy time of year punctuated by the last throws of Arctic cold blue northers and strong southerly warm breezes off the Gulf.

Spring has sprung by now, slowly but surely. The lack of heavy winter rains has not left behind large stands of clover and early spring grasses on which many ranchers here in Southeast Dallas County rely on for livestock forage. It’s a muted slow moving spring this year. The woods are thirsty.

With the pre-dawn skyline view of Dallas rapidly fading in the rear view mirror down 175 the goal is Post Oak Preserve south of Seagoville. A five to ten minute drive from the highway loops that ring Dallas, down into the old Post Oak Savannah that straddles the Main Fork and East Fork of the Trinity River.

Location: 1600 Bowers Road Seagoville Texas
Directions: From Dallas, take US175 south to the Seagoville Road/Kaufman Street exit. Make a right turn(south) on Environmental Way which turns into Bowers. The public parking for Post Oak Preserve is across the street from the DISD Environmental Learning Center. 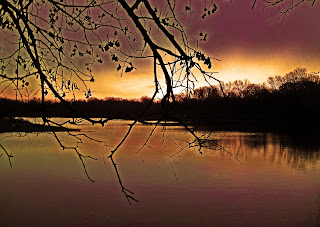 Opened in 1993 the Post Oak Preserve is one of the largest Dallas County Preserves at 334 acres in size and features a 12 acre man made lake situated in the center of the property. The rolling terrain is punctuated by a small unnamed creek that bisects the preserve and feeds the lake. 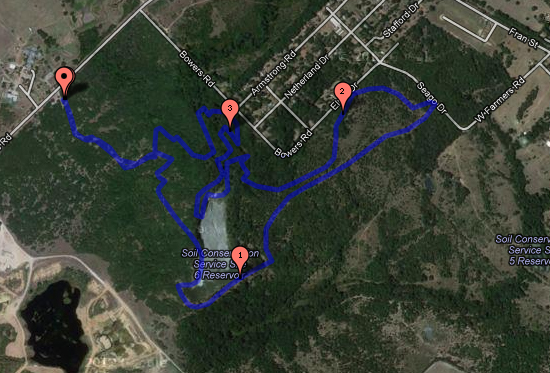 Points of interest are at the 1, 2 and 3 mile marks on the map. The route constitutes a matrix of all three trail types mentioned previously including moderate bushwhacking between mile 2 and 3. 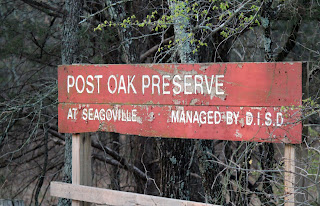 The story behind the creation of the DISD Environmental Center is an interesting one. The center began in the 1970s, housed in a set of old buildings and barns which served as an outdoor interactive science lab for DISD students. The new facilities replacing the old were built in the mid-1990s as the result of a somewhat anonymous six million dollar donation stemming from an illegal dumping verdict.

A record fine was imposed by the Texas Water Commission in 1991 against Dal-Tile for a dozen years of dumping hazardous, lead-contaminated waste into two gravel pits in far southeastern Dallas County. The fine was the largest ever levied for environmental dumping by the state commission.

Dal-Tile, which used compounds containing lead to manufacture glazed ceramic tiles, was required by law to send contaminated wastes from the manufacturing process to special landfills but, according to the state investigation, dumped the material for 12 years, 1975-87, in pits that were not specially licensed for such purpose. State investigators also found that Dal-Tile used waste oils on nearby farmland for dust abatement, failed to notify the state it had discharged industrial solid wastes into water, and failed to keep records of the waste and file annual reports.

Dal-Tile the company was not the only entity held responsible, a federal grand jury indicted Robert Brittingham, Jr., and company president John Lomonaco on 17 criminal counts, including conspiracy to dump hazardous waste. Brittingham was found guilty in 1993, fined $4 million, and sentenced to five years’ probation, which he began fulfilling with 15 hours a week in community service by financing and operating a $6 million lead-abatement program for Dallas. The total cost of the fines and dumpsite cleanup came to $16.5 million.

The DISD center at Post Oak Preserve was born/funded from that unfortunate episode. The new campus replaced the old dilapidated and cramped buildings that once sat on the site.

A large 12 acre lake serves as the centerpiece of Post Oak Preserve. This particular lake was build in the 1960s using federal and state money for soil and water conservation. The 1950s weather in North Texas was punctuated by a decade long drought cycle that left Dallas County in desperate need of water. Long term plans for increasing water supply, reservoirs and conservation led to a series of public works projects, one such being this lake. 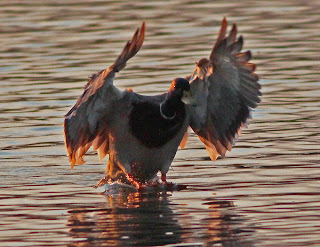 This creek eventually feeds into Parson’s Slough. The slough is one of the largest oxbows on the entire Trinity River. At one point in the past, within the last thousand or maybe even five hundred years ago, the Trinity ran within a couple thousand feet of Post Oak Preserve. Whether it was a large flood or log jam, the river jogged from it’s traditional more easterly course to one much further to the west. The rich bottom lands and gravels left behind have served nature and man alike for centuries. Great fishing and hunting to be had in this area. 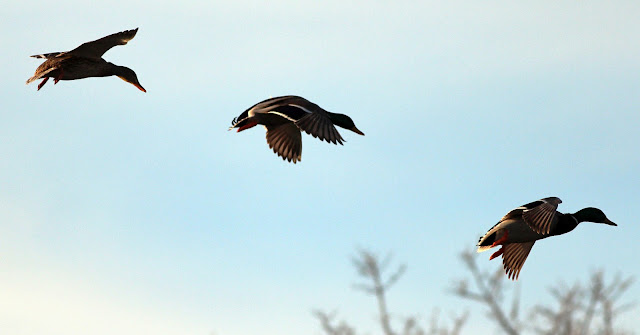 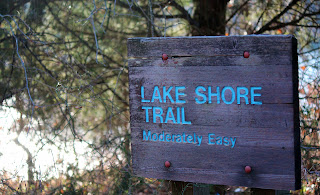 Fisherman’s detritus along the shoreline suggests there are fish in the lake. The water is remarkably clear for a DFW area impoundment most likely the result of the sandy soil, high water table and lack of flooding from the nearby Trinity River. 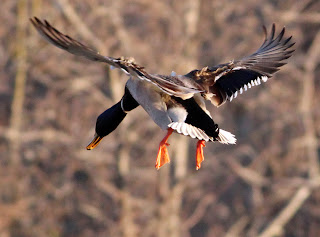 The formal Lake Shore Trail is a little over 1/4 mile in length and begins at a picnic area on a small bluff overlooking the lake. It runs the west side of the lake before double backing upon itself to the asphalt trail. This short trail affords access to informal trails that stretch along the east side of the lake dominated by a high earthen dam.

The dam has a sloping backside to it and has seen heavy recent rooting by feral pigs. On this particular trip one feral hog in the 150 pound range was seen northeast of the lake.

The lake serves as a great magnet for waterfowl. It appears that they spend their nights somewhere else and move into the lake at daybreak to feed.

Hunting is not allowed on the preserve and rules are strictly enforced. 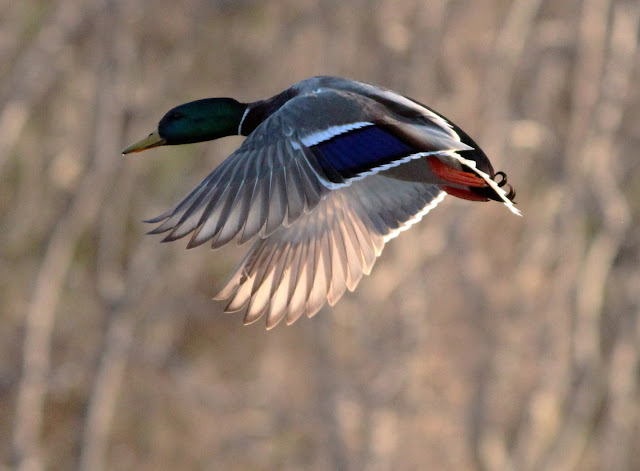 Trout Lilies — The Western Part of the Preserve

Post Oak Preserve is most well known for the large population of Trout Lilies and Coralroot Orchids that bloom along a small creek just upstream from the inlet with the 12 acre lake.

The western half of the preserve is forested along a creek and is easy to reach using the asphalt trail and the Wee Folks’ dirt trail that branches from it. Here the understory thins out in contrast to the greenbriar thicketed shoreline of the lake just out of view. Oak, cedar, ash and pecan dominate this lowland area.

It should be noted that the trout lilies have a very short flowering and growing cycle, only ten weeks in length. A mid-march visit left only a few blooms to see. Many of the trout lilies in Post Oak Preserve have yet to reach full maturity, which takes seven growing seasons. In the coming years the number of flowering plants should increase many fold as a result. Veer left from the asphalt trail 1/4 mile to see the trout lilies.

A series of wildlife viewing blinds have been built along the creek here, roughly 3 feet high and 20 feet in diameter. They give commanding views of the woods up and down the draw in which the small creek runs. Large amounts of deer scat in this area suggest a healthy Whitetail population forages in the woods here. 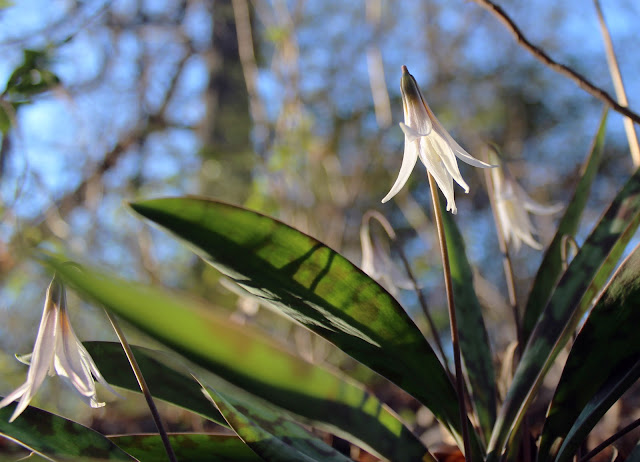 Moving east of the lake the formalized trails are non-existent and the preserve opens up into an open prairie environment dominated by stands of native prairie, cedar and cactus. Only the first hundred yards from the lake or the trout lily area are dominated by greenbriar(thorn thickets) before opening into more open ground. 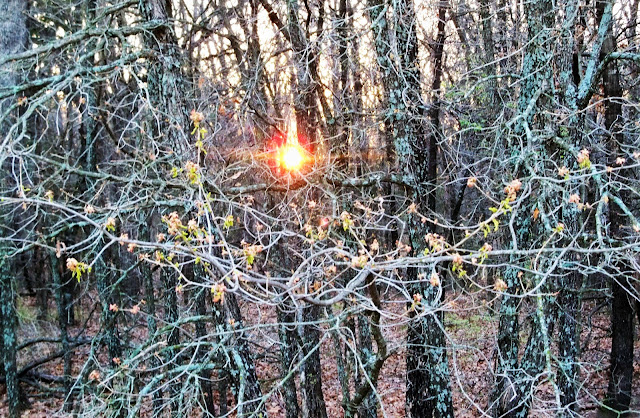 Once out in the open the namesake of the preserve, the Post Oak Savannah become apparent. The post oaks form brakes and meadows inbetween over sandy soil that is rare for Dallas County. The Post Oak Savannah once stretched from East Texas into East Dallas. Very few examples are left, this is one.

If you have the eyes for it, a wanderer can pick up the faint trace of an old dirt road which leads up to a ranch gate on Seago Road.

Seago was the original name for Seagoville, name taken from the town’s founder T.K. Seago(1836-1904). He platted and developed the town just up the road from here on 200 acres at Kaufman Street and Old Seagoville Road now called US 175. The old highway was once called Kickapoo Trace, used by Native Americans, pioneers and eventually settlers moving from East Texas into the Three Forks of the Trinity area, now called DFW. 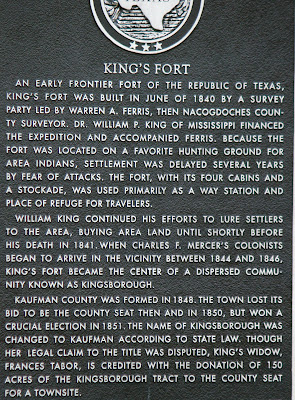 Matter of fact, if you drive just five minutes further down the road and claw up out of the river bottoms to a bluff, you’ll find the old site of King’s Fort, built when Texas was her own country. A commanding view of the Trinity Riverbottoms below it sits up high enough to see Downtown Dallas on a clear day.

It was from here that many of the famous surveys of Dallas County began in 1840 only to be turned back by fierce Indian encounters.

Travels from here have been well documented by men like Warren Ferris as told in Land is the Cry, Warren Angus Ferris, Pioneer Texas Surveyor and Founder of Dallas County and Edward Parkinson’s accounts of travel with President Sam Houston and his Treaty Party Expedition to Dallas in 1843.

A worthwhile stop if you find yourself headed to First Monday.

Getting back to the preserve……

Some of the trees along the old dirt road here were most likely dumped, planted or volunteered themselves before the old gate blocking access was secured to the preserve. A couple examples of non-native trees like the cherry tree above and some Bradford Pear testify to that effect.

The dominant flowering tree here at Post Oak Preserve is the Texas Redbud Cercis canadensis var. texensis. A harbinger of spring, many old timers use the blooming of the redbud as a signal to plant crops or grab a fishing rod during the Sand Bass runs up area creeks.

Fruticose (spore-producing) and Foliose (leafy)lichens on  a branch of a tree in the Post Oak Preserve. Lichens consist of a photosynthetic and fungus partner, either an alga or cyanobacteria, and can live in harsh environments where neither partner could survive or reproduce alone. This is a Golden eye lichen (Teloschistes chrysophthalmus).