The shortest days of the year in North Texas usually signal the peak residency times of overwintering migratory ducks for this part of the Trinity River Basin. 2013 saw a very slow start to the migratory fowl from Canada and northern tier states due to a prolonged cold spring and summer that slowed nesting and hatchlings.

Sure enough the birds made it to Texas. It was really not until the heavy late 2013 rains hit North Texas that an abundance of wintering ducks made it into the Lower Chain of Wetlands. Many of the ducks are dabblers who surface feed and prefer flooded areas to forage.

The photo above shows Wetland Cell G in the Lower Chain of Wetlands taken by David Mimlitch this winter. Click the photo to enlarge. At 33mb in size the detail is quite good. It was taken a couple hundred feet above Loop 12 looking north. To the left of the photo sits the Joppa Community on a slight rise. To the right is the Trinity River channel which sits some 30 feet in elevation below the chain of wetlands in the center. If you enlarge the photo and follow the slight depression of White Rock Creek to the north, one can see White Rock Lake on the far horizon.

The Lower Chain of Wetlands sit on the former site of the Sleepy Hollow Country Club. The private golf course was bought out by the government for the Trinity River Corridor Project, a joint venture between the Corps of Engineers and the City of Dallas for flood control. The advertised flood prone golf course was removed citing the frequent water topping events. Oddly, a new golf course, the Trinity Forest Golf Course and future Byron Nelson host will be built just hundreds of yards away across the river. Go figure.

Been twenty five years since the last big spring floods knocked the bottom out of South Dallas. When that happens again, which it will, the destruction will be absolute. The water in the photo above would be about 55 feet deep in mid channel on the Trinity, two miles wide. The water depth at the old Sleepy Hollow Country Club would be twenty feet deep on much of the course.

It’s when the Wetland Cells overbank and ooze across the flat tracts of land here that the majority of wildlife moves into the area. I have always hoped that some shallow wading bird areas would be developed for the lower chain of wetlands. As it stands now, the birds can only fish when the water is up.

There would be far more diversity in the cells here if large sections were allowed to flood on a permanent basis rather than the rare heavy rain event. 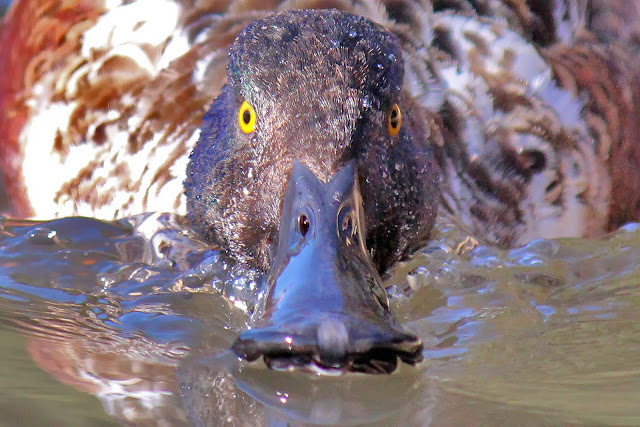 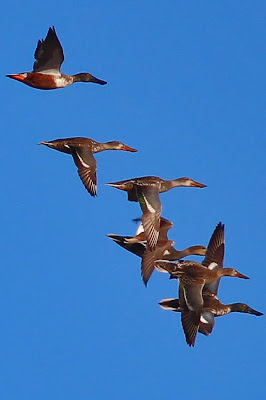 One of the most common birds seen this time of year in the chain of wetlands is the Northern Shoveler. The Northern Shoveler is also one of the most unique due to its large shovel-shaped bill. Male shovelers have green heads, a white body, rusty-red undersides and black wings. Females have mottled brown, black and white feathers and a blue patch on their wings.

At first glance, someone not familiar with the great variety of ducks that spend fall and winter in the Trinity River may consider a Northern shoveler (Anas clypeata) to be an odd-looking Mallard. Males of both species have a distinctive bright green head. However, the similarities end there.  A male Northern shoveler will sport a white breast with brown sides with both white and mottled brown areas on the back. 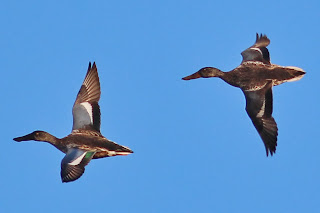 The shoveler also flashes a bright yellow eye to compare with the Mallard’s dark eye. Additionally, at 19 inches long, the shoveler is a bit smaller than the 23-inch long Mallard.

To many observers, the most striking feature of the shoveler is its very large spatulate bill, which almost looks something like a shoehorn. The shoveler uses this large bill to skim the water for food as the bird swims along in its preferred habitat of marshes, ponds and other shallow bodies of water.

As is typical of female ducks, the female shoveler has a quite non-descript plumage of mottled brown. This plumage allows the female to camouflage itself while on the nest. This is especially important for ground-nesting birds with long incubation periods.

The Northern Shoveler is the most widespread and abundant representative of a closely related group of ducks that have a spatulate bill. The other three species of spatulate billed ducks reside in the Southern Hemisphere and have presumably descended from the northern species.

The Northern Shoveler has an almost circumpolar distribution in the Northern Hemisphere, and migrates long distances to winter in the Southern United States, Mexico, Africa and Southeast Asia.

Most of the shovelers seen here in North Texas spend their summers in Northern Canada.

In the winter they form pair bonds and this time serves as formative in the relationship between the male and female pair prior to breeding and nesting thousands of miles to the north. 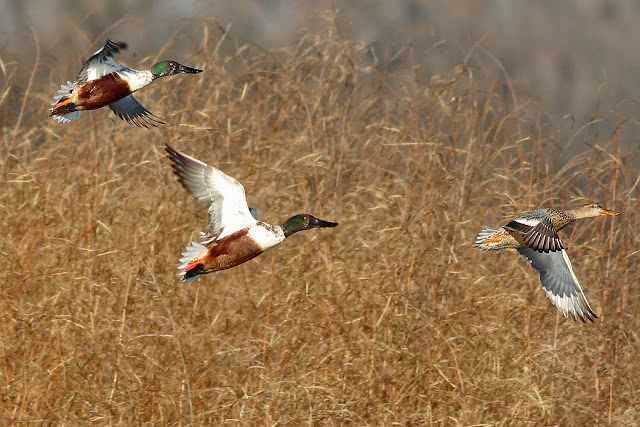 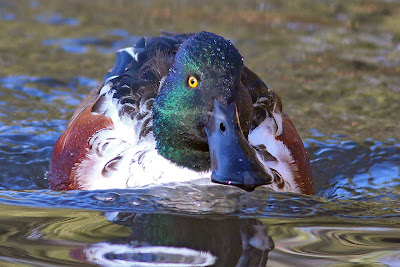 The most obvious feature of this bird is its unusual, spoon-shaped bill. The bill has a series of well developed lamellae along the edges which serve to strain out tiny crustaceans and other food particles.

In flight, both male and female shovelers show a large white area in the underwing as well as a whitish blue patch on the leading edge of the upper part of the wing and a bright green patch in the trailing edge of the upper wing (an area known in ducks as the speculum).

Northern shovelers are considered by some to be the most territorial of all North American dabbling ducks. Dabbling ducks feed either on the surface of the water or will dip their heads underwater to find food just below the surface but keep their bodies on the surface. 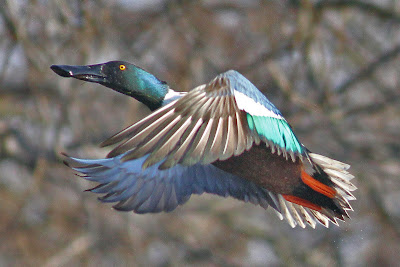 This differentiates the dabblers from diving ducks who will completely submerge in search of food, sometimes to considerable depths. In addition to their normal surface feeding, Shovelers will also “tip up”, often for longer periods than other surface feeders.

Social feeding among Northern Shovelers is common. The shovelers are often drawn to feeding areas by other bird species feeding in an area. Shovelers take advantage of the food particles churned to the surface by the other birds swimming or wading in the area. Single birds may swim in a tight circle to create a whirlpool to cause food to come to the surface,

The physical exertion of migrating from northern breeding areas to the southern winter habitat In Texas depletes much of a bird’s stored energy and fat reserves. Thus, upon arrival at the wintering grounds on the Trinity River, they must replace these reserves by feeding on high energy and protein content foods. After their body condition is restored, the fall season is generally not very stressful for waterfowl since weather remains somewhat mild in Texas and there is an abundance of ripened food. During this time, waterfowl build body reserves as insurance against severe weather later in the season.

During periods of extreme cold weather in the depth of winter, most waterfowl restrict their activity to conserve energy. At these times, the number of feeding flights are reduced, and a greater proportion of time is spent resting. When feeding does occur, sources of food that are quickly and easily obtained and also very high in energy content are preferred.

When To Go
Best viewing times here in the Lower Chain of Wetlands are on days after heavy rains and cold fronts, days when the wind is up to some extent, around sunrise or sunset. The ducks are more than likely in the heavy brush and weeds feeding rather than flying. This cold and rather impossible weather for humans keeps the 4×4 vehicles out of the Wetland Cells too which can be a burdensome menace. 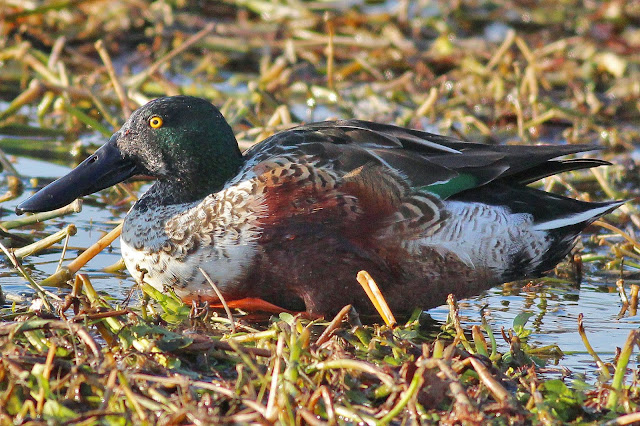